Hi everyone, I'm moving in two directions today, because our linear perception of time is but a portal in the side of the prison of our bodies.

Last week we welcomed Natsume Fusanosuke (夏目房之介) - a cartoonist, critic, theorist and educator whose work I've seen discussed many times over the years; you may have spotted a link to his blog in Helen Chazan's Tono Monogatari review not a month ago. I think the writing about manga on this site is generally very strong, but we've lacked the perspective of Japanese writers on Japanese comics, so Tucker and I were very pleased to present a 2018 essay on the topic of Jirō Taniguchi, an artist who's taken on several 'forms' depending on which of global comics' solitudes is translating him - as somebody who discovered Taniguchi through VIZ's 1990 edition of his and Natsuo Sekikawa's crime comics collection Hotel Harbour View, it has been striking to see his reputation in the English-reading terrains of the 21st century become that of a solemn purveyor of peaceable observational works. Natsume addresses this international identity of Taniguchi from the Japanese- and French-language comics perspectives, via the translation of Oregon-based scholars Jon Holt & Teppei Fukuda. We are hoping to see more of Prof. Natsume's work in the coming weeks!

Also last week, we posted a review by another new contributor, Edward Haynes - a writer and editor of comics, prose fiction and criticism whose work has appeared at venues such as SOLRAD, Multiversity Comics, PanelxPanel and others. They offered us their thoughts on the music and horror-themed graphic novel Blue In Green, and we hope to see them again soon.

This week, we are kicking things off with another artist-on-artist conversation, in which Joe Ollmann of the recent Fictional Father chats up Brecht Evens of The City of Belgium - both graphic novels from Drawn and Quarterly. Topics include the limited utility of art in a medical crisis, the finer points of translating one's own work to another language, and exactly how easy is it to become a controversial figure in the polite society of art comics. Read it and live it!

Lately I've been rearranging my plans, as I'm sure some of you are - I was going to visit some friends in New Orleans in October, but that might not be a great idea anymore; I'm vaccinated, but I don't want to put anyone at risk. I was also looking forward to Ditko-Con 2021, to be held on September 11 in Steve Ditko's hometown of Johnstown, PA; it's still happening (as of today), I just don't know if I'll go. A small con that functions as a sort of meetup for mid-east coast Ditko fans is a really fun idea to me.

I became very sentimental looking at videos from another recent small con: the Mission Underground Comic Con, an event from last June in San Francisco, sponsored by deadcrow. You might know deadcrow as the organization behind the Tinfoil anthologies, most recently co-published with Austin English's Domino Books. The Tinfoil books are very regional, and very inclusive, in the manner of lo-fi underground newspapers, but not as frequent. It's an occasional dispatch. The item you see here, however, is not an issue of Tinfoil; it's a collection titled Speshal Comics, which was available at the show, and which I bought off the deadcrow website later on. It's sold out from them, but you can still get one from Domino. The book is a tribute anthology to Evan "Spesh" Larsen, a cartoonist and graffiti tagger who died in 2019. Though not a deluxe print object, it's a complex book, with various tipped-in minicomics; some of the on-page contributions also seem to be minicomics that have been reformatted, like the below excerpt from a piece by Mike Reger: 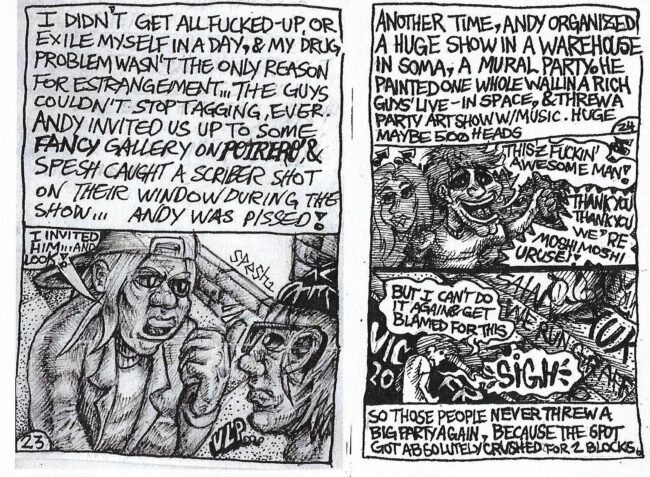 What we see here is push and pull of the form of art. The ascendant American artist Andrew Schoultz has invited the author and his friends to a tony exhibition; Larsen takes the opportunity to tag the glass front of the gallery, causing some upset. A later show results in work spilling out for two blocks around, and the rich guy sponsoring the event laments that it can't happen again. These are the butting forces of art as an aesthetic, a learned thing, a career path -- and a status symbol for those who patronize it -- and art as a process of living, agnostic to ideas of property rights, 'ownership' and social niceties. Art that does not desire to be captured in a book to realize itself as a true thing, but may nonetheless be memorialized as it is here: a record of a small society of people working directly with one another in the place where they live. But Reger has lived a lot, and demonstrates in his piece how this type of practice removes a great deal of the cushion from living - and nobody wants to see what little there is disappear.

The other day there was a tweet from the artist Chris Kindred that provoked some discussion: "you can't work in comics for a living and be happy at the same time. not without a massive amount of luck, privilege or generational wealth" You struggle to get noticed, to get paid, and if you have a job you struggle with the job and the art. You have a patron, a spouse, something - you struggle with the responsibility of that. The support of authority figures, of which I am one, is a fleeting and fragile thing. People tell you "just work hard," but comics can only reward a few things. I think of another late artist, Jesse Hamm, who loved comics so fervently he kept offering tips to improve the skills of cartoonists, even though comics offered him very little, because he lacked the promotional celebrity fire to sell himself and he did not want to work in those few corners of the market that paid. So he worked in illustration, pouring love into the the thing that gave him so little beyond the affection of people.

Anyway, diary, that is all I have time to write tonight. I will see you again next week, unless I die. 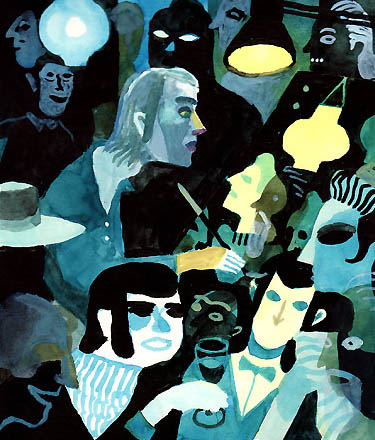 “I Didn’t Find Art To Be A Huge Help When I Was In Real Trouble”: A Conversation With Brecht Evens 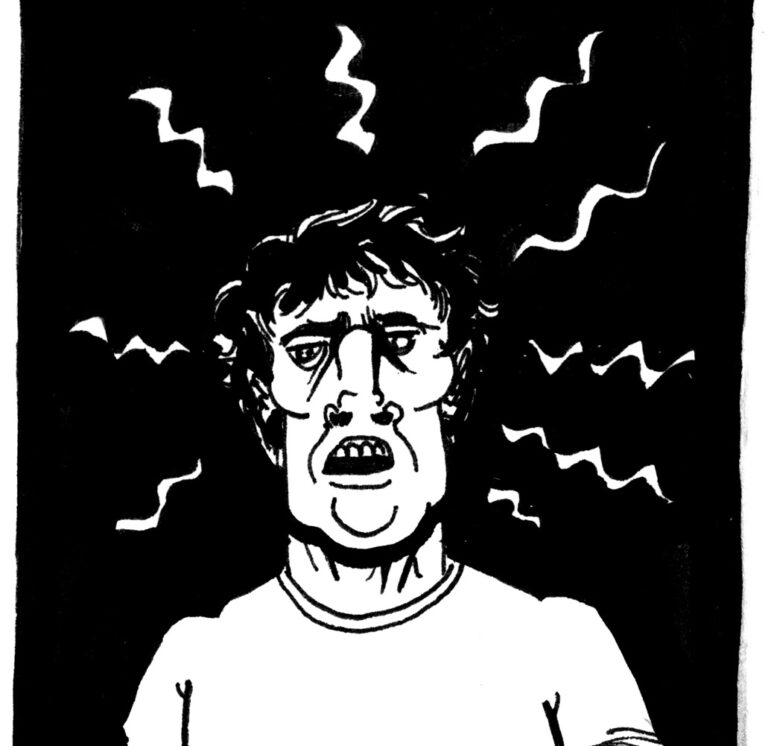