We are making an animatic (click on that link for a definition). It's a craaaaazy amount of drawing work. I feel like I just ran through a triathlon cuz it might as well have been a multi-sport endurance race. Animation is a whole new skill set that I'm trying to wrap my head around.

Dash can draw. He's fast. Prolific. And good. Great, actually. It's fun to watch him go. We are making 8.5 x 11-inch storyboards for the animatic (the movie screen proportion is just about 6 x 10 inches on the sheet). We're just drawing with Tombo brush pens. Some grays, but mostly just black lines on white paper. No color right now. It makes everything go faster and read clearer at this stage. Were there to be color changes from board to board and scene to scene - the animatic would be too jarring. So no color. Just lines and some tone. It's a fast drawing game. We can just GO! DRAW! It was like being in a band. Improvising notes over changes live onstage! Everybody knows that I wish drawing could be more like playing music - and this was it!

The drawing quota for each day I was working was one page of the script. One page of the script is roughly one scene—and one scene is usually around a dozen storyboards. I would start drawing at about 8AM and finish my scene around 7PM. It was a ton of work. I basically didn't leave the studio for two weeks, which was fine because it was usually 100 degrees outside. Better to just stay inside with the air-conditioning and draw, draw, draw.

Dash has been cranking on the boards for months and he's at about the 45-minute mark of the script. He's doing just bout the whole animatic himself and brought me in to help with some background heavy scenes. So we just sat across a big table from each other and drew. All day. Every time I finished a board, I would hold it up and show Dash. "Is this what you want for this one?" I'd ask. Sometimes, he'd ask me to change an expression or change the camera angle. But usually, I would get a "yes" and move on to the next board. We were trying to make a big push in two weeks to get us to the 60-minute mark of the script. So, it was more about just drawing in a fast, clear style. If a drawing didn't "read" it was better to fix it later. Better to just move on to the next board instead of getting bogged down on one board.

(Above: This a frame that I drew from the demo teaser. Dash took this frame and inked it for the final version. I'm showing this frame because this is what some of my storyboards looked like: kinda loose, kinda tight. Just trying to get the framing and the expression right.)

Trying to not get bogged down on one storyboard was the hard part for me. Sometimes, I would get attached to a certain storyboard despite it being maybe a little hard to "read." I would like the way the drawing looked just as a drawing, as something you could take out of context and just appreciate as a drawing. But, we were drawing storyboards that are meant to be clear and readable. So, I would simply lightbox the "hard to read" board and quickly turn it into an "easy to read" board.

All in all, the process isn't so different than making comics for the comics page. The difference was really in the acting of the characters. In comics, it's about choosing the particular moment in between other moments that best conveys a character's action or emotion. In animation, it's about showing ALL of that action or emotion. So, when making the storyboards we show the characters acting out their lines or performing an action in a much more elaborate way. We aren't fully animating the scene but still attempting to provide enough key frames to clearly show how the scene will unfold. That means showing each cut from one camera angle to the other, or drawing each zoom-in or zoom-out of the camera. So, it's different than comics in so much as you have to really see the whole action as opposed to the "frozen" moments in between actions.

It's a different way of pacing, of course, because the viewer is seeing the action in real time, and not seeing a whole sequence at once like in comics. You follow, right? Meaning with the comics page or comics strip, the viewer sees the action unfold all at once, even if it is broken up into separate panels. Animation is designed to unfold one frame at a time IN TIME. "Movie space "as opposed to "mural space." Since the pacing is one frame at a time, you essentially don't ever see the other frames except for that one second when it goes by. You aren't thinking about the page and panel sizes. The fixed frame also adds something to the drawings. Maybe it takes away the "tyranny" of one image being bigger than others on a comics page — think mural wall — the fixed frame gives equal importance to every image. But it's because the frames exist "in time" that it's possible. Rows of equal size frames on a wall or on a page still have cede real estate to other frames. The movie frame on the screen has it's moment than it is gone. It doesn't have to fight for importance just time. The panels on the wall or the comics page stay put even if they don't get center stage.

The fixed frame really lends itself to drawing and drawing fast. I must have said a thousand times while boarding that I wished I could just do a comic book like this. But you can't, I would tell myself, because the drawings would be read too quickly. A sketchy drawing held on the screen for ten seconds with a voice-over is essentially "read" differently than the same sketchy drawing taking up one page of a comic book. They are different. For all the talk that movies are like comics there is equal talk to say they are unlike each other. And here was that nexus point. The panel, "in time" and in flux. Way different than the panel, "in space" and fixed.

Can you dig it? 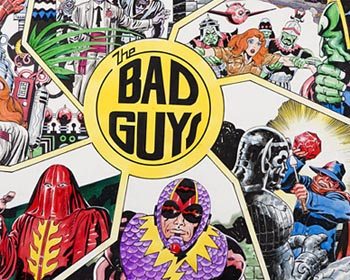