Today on the site, we have Chris Mautner's review of the limited-edition release of Tim Hensley's Sir Alfred No. 3, a comics sort-of biography of Alfred Hitchcock, and the final product of the late Alvin Buenaventura's Pigeon Press, now being distributed by Fantagraphics.

With its above-average size and slapstick gag format, Sir Alfred evokes both the movie magazines and the humor-based comic books of mid-20th century America, especially titles that drew on established celebrities, like The Adventures of Bob Hope. Even the title is a sly wink to periodicals past, a teasing suggestion of an ongoing Hitchcock series, though, of course, no first or second issue exists.

Hensley’s biggest aesthetic influence here, though, is John Stanley, with Hitchcock drawn to resemble a middle-aged Tubby. It works better than you would imagine -- there always was a cartoonish aspect to Hitchcock’s public persona, right down to the anecdote (shared in the comic) that he wore identical basic black suits for most of his career.

Along the way, however, Hensley takes a moment or two to ape cartoonists such as Robert Ripley, Milt Gross, Don Martin, and Jaime Hernandez. Hensley has proven himself to be a formidable mimic, and perhaps most impressively, he uses this talent not to show off as much as to underscore the comic’s theme (or service the gag at hand).

—The hardest-working interviewer on the comics internet, Alex Dueben, talks to Simon Hanselmann for The Beat.

Dueben: You mentioned the last time we spoke that you had years of stories in mind and that you saw this as a long term project. Is that still your plan or has your approach changed?

Hanselmann: Oh yeah, that’s the plan. I’m Love and Rockets-ing this shit. I have piles and piles of outlines for future episodes. It takes so long to paint all these pages. I’m very far ahead in terms of mapping and planning. All other plans for comics that aren’t Megg and Mogg based have gone out the window. I just want to draw Megg and Mogg. I love them. Forever and always.

Hot Dog Taste Test overflows with colorful oddities. Hanawalt, who's the production designer and producer of the Netflix cartoon BoJack Horseman, draws yuppie songbirds, bananas worn as shoes, a neurotic toucan, "a pinch of stir-fried dirt," the latest trends in menstrual huts, sexualized kiwi birds and an array of otters in lavender swimsuits and matching caps. She reflects endlessly on how to violate food taboos in the weirdest way possible, even musing on the greatest food taboo of all: The matter of when and how it comes out the other end. She designs a straw toilet (so people grossed out by public restrooms can sit on nests instead) and depicts herself peeing.

We learn in an afterword that Sturm, the author of the Adventures in Cartooning< series as well as the “Ape and Armadillo” picture books, was inspired by the Japanese tradition of kamishibai, or “paper theater.” Building on a Buddhist practice of telling stories using picture scrolls, performers in the 1920s would bicycle from village to village with wooden boxes holding stacks of images from stories inspired by the silent films of the West. As they rotated through the images, the performers provided dialogue and sound effects to enthralled children — then sold them candy.

—Mike Lynch has resurrected a 1961 guide to gag cartooning, How to Create 1000 Gags a Year. 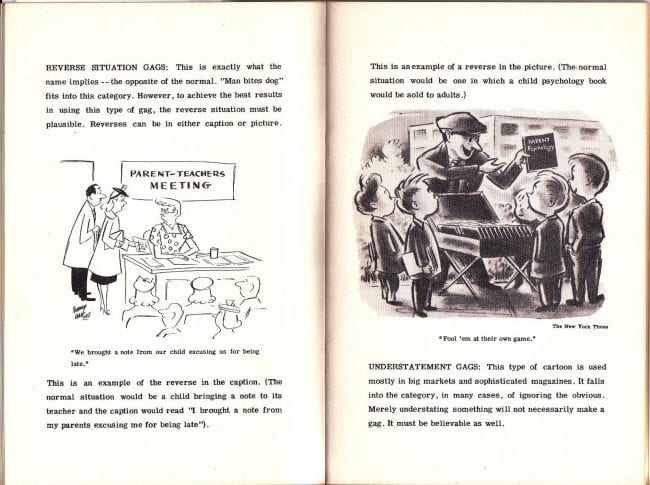