September’s here, which can only mean that it will soon be time to watch the leaves change colour and to spring forward/fall back or spring back/fall forward, depending on your hemisphere.

Heck of a week just gone, so why not let some of This Week’s Links, below, lead you calmly into the weekend?

• Fall awards season build-up continues apace, as the Small Press Expo announced this year’s nominees for the Ignatz Awards, with Sunmi, Daniel Elkin, and Nguyên Khôi Nguyễn acting as 2021’s jurors - winners will be announced later this month during this year’s virtual SPX, and you can sign up now to receive a voting ballot and make your voice heard.

• In comics legends coming out of retirement news, dual announcements arrived this week that Alex Niño will be illustrating a new graphic novel, Alandal, with writer Jay Ignacio, which debuts at this weekend’s virtual Philippine International Comics Festival; and Kazuo Umezu has announced that he is to release his first new work in 26 years, arriving January 2022, after being in production for four years.

• Koyama Provides have announced the latest recipient of their grants program, with $3,000 awarded to Ginette Lapalme, which will be used to help establish a new gallery and workshop space on the site of the former Toronto art venue Weird Things.

• Finally this week, holding out a hand to feel the latest droplet to fall in the perfect storm currently hitting comics retail and distribution, DC Comics have announced publishing delays on a large number of their titles, citing supply chain issues that have already impacted manga and book publishing worldwide. Given how widespread these shortages are, and the ongoing impact on paper and printing plate manufacturers, ink producers, and industrial equipment suppliers, as well as global shortages in shipping containers and haulage drivers, alongside closure of paper mills due to falling demand in other sectors, it’s unlikely that DC will be the last publisher to be affected by these. The Beat has a new edition of The Retailer’s View looking at these mounting concerns, as October’s big direct market distribution shake-up looms, from a bricks and mortar perspective.

Supply and demand… This week’s reviews.

• Sally Bryden reviews the fascinating compositions of Jaime Hernandez’ Queen of the Ring: Wrestling Drawings by Jaime Hernandez 1980-2020 - “Hernandez's personal stylistic quirks naturally shine through, despite the conditions he self-imposes for this art, leading him to take on a very different compositional character from his narrative comic work - though, in the earliest darkly shaded full-color drawings shown, there are hints of his cover illustrations & chapter-opening pages.”

• Helen Chazan reviews the surreal psychedelia of Miyoshi’s Rabbit Game, translated by Ryan Parker - “Rabbit Game doesn’t end with the trademark gekiga ironic pan away to scenery, but conventional narrative satisfaction similarly drifts off into a symbolic aether that confounds a fandom-inclined reader's attempts to 'solve' the narrative mechanics, to literalize the abstraction present in anime touchstones as roadmaps to decipher.”

• Roman Muradov reviews the unimpressive comforts of Manuele Fior’s Celestia, translated by Jamie Richards “I miss the uncertainty of Fior's earlier books, too. Each one was a search, and in 5000 km Per Second, the artistic growth, affected or real, is used as a narrative device (again, intentionally or not is unimportant). Here he's fairly settled in his ways, although later in the book the brush relaxes a little and shows a bit of roughness. Even within this fairly stable style, the panels shift and change their attitude, flatness and finish.”

Lee Lai reviews the enthralling tranquility of R. Kikuo Johnson’s No One Else.

- The lovable silliness of Rob Harrell’s Batpig: When Pigs Fly.

- The graceful lightness of Niki Smith’s The Golden Hour.

- The sublime evocations of Andrew Donkin, Dave Kopka, and Brann Livesay’s adaptation of Ruta Sepetys’ Between Shades of Gray.

- The droll daftness of Tedd Arnold, Martha Hamilton, and Mitch Weiss’ Noodleheads do the Impossible.

Anja Webb has a starred capsule review of the engrossing entanglements of Dave Baker, Nicole Goux, and Ellie Hall’s Everyone Is Tulip.

- The intersectional charms of S. Bear Bergman and Saul Freedman-Lawson’s Special Topics in Being a Human.

- The soulful anxiety of David Gaffney and Dan Berry’s Rivers.

• Jameson Hampton reviews Liminal 11's summer output, including the primal poignancy of John Cei Douglas' All the Places in Between, and the enjoyable philosophy of Sean Michael Wilson and Fumio Obata's The Spirit of Japan: Festivals, Rituals, & Everyday Magic.

Jessica 6 Logan 5, what a match pic.twitter.com/KpmhHW21xJ

A welcome distraction… This week’s interviews.

• David Brooke talks to Kat Calamia about Bi Visibility: A Bisexual Comic Book Anthology, the importance of representation in media, and crowdfunding lessons learned; and to Olivia Stephens about Artie and the Wolf Moon, a maternal framing of werewolves, and what genre fiction gets highlighted by publishers and why.

• Chris Hassan speaks with Jonathan Hickman about his tenure on X-Men drawing to a close, cool names, thwarted experiments in publishing, and closing the door on mutantkind.

• Chris Coplan interviews Aubrey Sitterson and Fico Ossio about No One Left To Fight II, jumping on points, community support, and changing styles.

Avery Kaplan talks to Rachele Aragno about Mel the Chosen, alter egos, the tactile pleasures of comics making, and villains who are evil by nature.

Cheryl Strayed speaks with Alison Bechdel about The Secret to Superhuman Strength, the joke of an unending quest, experimental memoirs, and finding perspective in nature.

Becky Barnicoat speaks with Anna Härmälä about Single Mothering, tragedy plus time equalling comedy, and sharing the brutal and loving sides of motherhood.

Milton Griepp interviews Beth Kawasaki and Daihei Shiohama about Media Do International, opportunities in distributing manga for the American e-book market, and demand spikes for content as the COVID-19 pandemic progresses.

Kyle Welch speaks with Peter Milligan about Human Remains, COVID-19 social upheaval, ensuring a pervading sense of horror in a story, and the collaborative process of making comics.

Kristin Kiely talks to Javier Olivares about Las Meninas/The Ladies-In-Waiting, saving ideas from competitions, the tools used to tell stories, and the social construction of masterpieces.

Too hot for TV… This week’s features and longreads.

• Here at TCJ, Brian Puaca looks back at the comic industry contraction that occurred during the advent of the Comics Code Authority, and uses this as a framework for looking at how the market may adapt to the pressures applied by the ongoing COVID-19 pandemic - “Does the arrival of new distributors mean improved service, shipping, and financial terms for store owners? How will newfound competition in the comics distribution world bring benefits for customers and innovations for stores and publishers? Could the Marvel relationship with Penguin Random House provide new avenues for the sale of comics and graphic novels (which poses its own challenges for comic book store owners)? As the pandemic subsides and things return to normal, these will be interesting questions to consider.”

• Also for TCJ, Paul Tumey measures up another edition of Framed!, this time around looking at the rhinological humour of Basil Wolverton, and the various influences that may have shaped it, now to be found in Scoop Scuttle and His Pals: The Crackpot Comics of Basil Wolverton - “When I stop to wonder if I am seeing subversive, frisky undertones where they weren’t intentional, it helps to remember Basil Wolverton performed comedy routines on stage as a young man in a circuit that took him through the cities of the Pacific Northwest and later hosted radio shows in the late 1940s. Surely there were some elbow-in-the-ribs-wink-wink type gags performed for a chuckling public.”

• For The New Yorker, Chris Ware writes on the current glut of comics-focused exhibitions in Chicago, as ‘Chicago: Where the Comics Came to Life’, curated by Ware with Tim Samuelson, opens to the public, and looks back at Chicago’s unique place in American comics history, at the turn of the 20th century.

• Over at The Beat, Arpad Okay looks at the shōjo manga of Osamu Tezuka, and what sets these stories apart from his shōnen works, if anything, other than gender binary-focused marketing of the time.

• Broken Frontier presents creator commentary from Sean Michael Wilson on pages from his and Jaime Huxtable’s adaptation of George Orwell’s autobiographical work Such, Such Were the Joys, and where language was added or subtracted to complement the visual flow.

• For NeoText, Tom Shapira writes on America’s embracing of the forever war, as viewed through the lens of Garth Ennis’ The Punisher stories; and RM Rhodes takes a ride on Paul Kirchner’s The Bus, examining the formalist meta-commentary that can be found along its route.

• Shelfdust’s Field Theory series continues, as Sean Dillon looks back to October of 1978, and Jim Davis’ eschewing of the void to maintain a hierarchical narrative; and Cori McCreery writes on Sandman #8, and the importance of Death in a series focused on Endless characters.

• For Hyperallergic, Valentina Di Liscia has a download with Ilan Manouach and Ioannis Siglidis, looking at the Neural Yorker, and taking human input out of the art of cartooning.

• Over at NPR, Zack Quaintance spotlights creators bringing varied folklore to comics audiences, and documents the improving access for creators to publish stories not rooted in Western cultures.

• For Slate, Rebecca Onion presents selections from Paul S. Hirsch’s book Pulp Empire: The Secret History of Comic Book Imperialism, with commentary from Hirsch on the prodigious use of comics for pro-America propaganda during World War II and the Cold War.

• Mike Peterson rounded up the political beat for The Daily Cartoonist, as all eyes were on Afghanistan, yet again, before turning inward to Texas.

• As the back-to-school blues well and truly kick in, maybe some extra-curricular cartooning would turn frowns upside down, in which case the fall comics classes at The Center for Cartoon Studies may just fit the bill.

• Noah Van Sciver presented a double bill of cartoonist chats, first talking with Will Dinski about working from home, publisher deals, and making what you want to make; and spoke to Sami Alwani about The Pleasure of the Text, puppet surgery, making things dense, and the construction and representation of self.

• Some quadruple header Cartoonist Kayfabes this week, as combinations of Jim Rugg, Ed Piskor, Tom Scioli, and Warren Bernard took a look at some early Erik Larsen work, Jack Kirby’s In the Days of the Mob, Art Spiegelman’s Maus, Stan Lee’s Secrets Behind the Comics, Archie Goodwin and Al Williamson Star Wars comics, USAF cartooning guides, and a copy of Detective Comics #78 is freed from a CGC prison.

• A couple of trips up in the Word Balloon with John Siuntres, as he spoke with Henry Barajas about Helm Greycastle, and with Jon Tsuei about Search for Hu.

• Publisher’s Weekly’s More to Come covered comics’ latest big week in comics for comics with comics, as Calvin Reid, Heidi MacDonald, and Kate Fitzsimons discussed digital platforms and distribution, and how you make a convention safe in 2021.

• Dan Berry welcomed Luke Kruger-Howard to Make It Then Tell Everybody, as they discussed styles, emotions, deflating, praise, doubts, and dopamine.

That’s all for this week, I should probably look up when the clocks actually do change, so I don’t forget, but I definitely will not remember to, such is my ongoing folly. 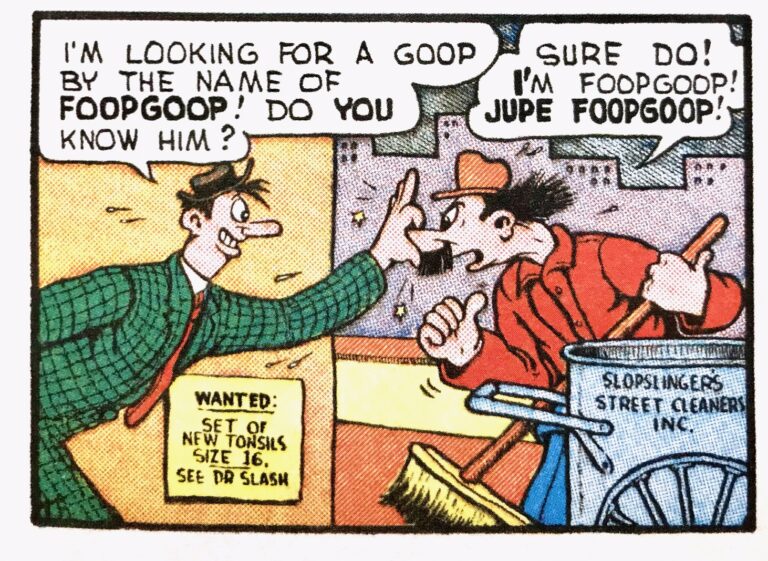 Basil Wolverton: Daft Drivel Dished on the Daffy Dude Who Drew Us Out of the Dumps 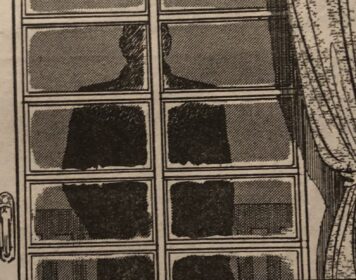