Format Fever. I’ve been thinking about scroll comics. Not so much done on a scroll, but presented as a scroll because they're online.

What’s interesting about it to me is that reading the scroll format changes the way page reveals work. Often a left/right spread will be broken up so that the right hand side page is under the left hand side page. This spread (below): 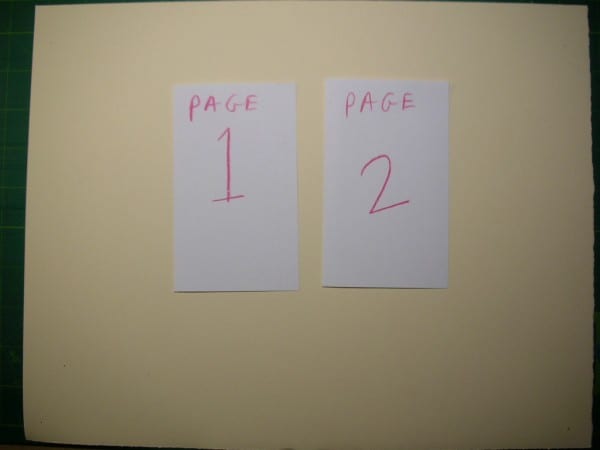 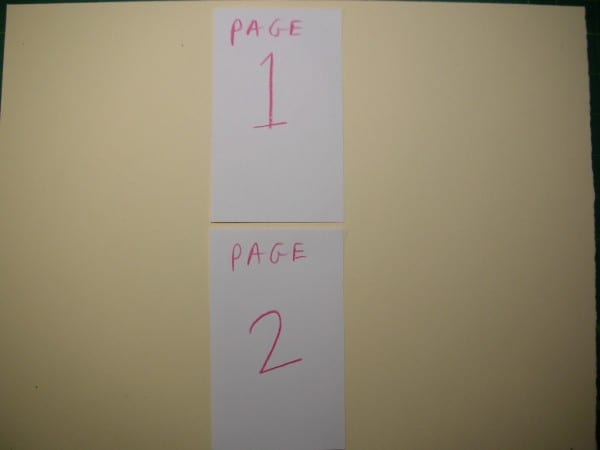 **I'm aware that most comics have a page 1 that begins on the right hand side--my demo above is just to show how the 1, 2 left/right changes to an over/under thing.

I like preserving the spreads when showing a comic book online. That might be old-fashioned but I think that it helps preserve the reveals also.

Ever read The Missing Piece Meets the Big O by Shel Silverstein? It’s horizontally formatted scroll which is presented as a book. The format uses the periodicity of the book’s left side/right side spread for reveals. Each spread is one panel of a sequenced comic strip that goes on for about 100 pages or 50 spreads. Each spread has it’s own 1, 2 left side, right side rhythm and the “1” unity of each spread as one image. (It’s a great book, I think, because it is so simply presented as image and text. 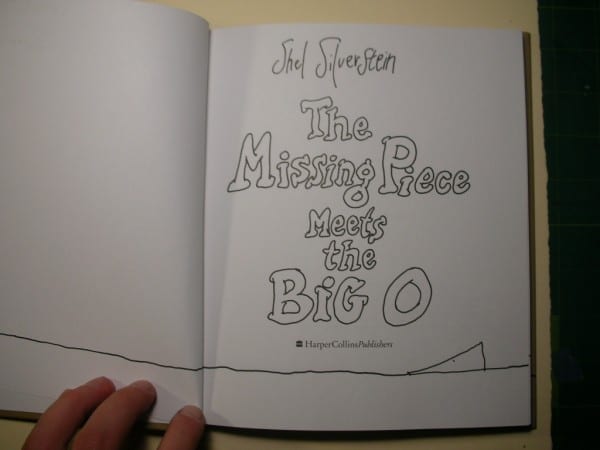 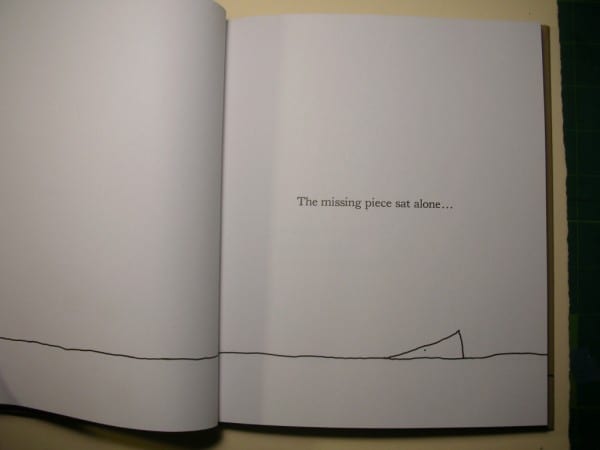 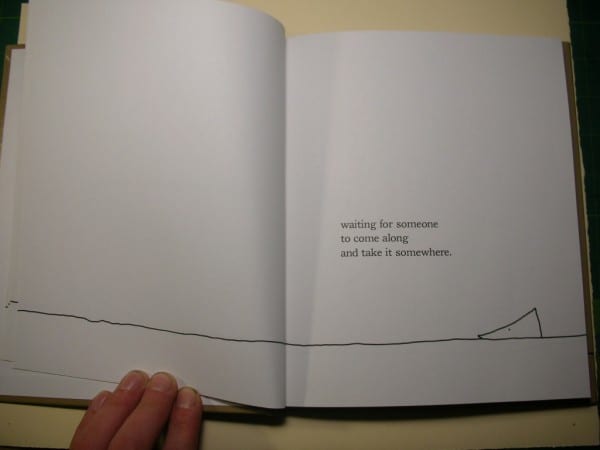 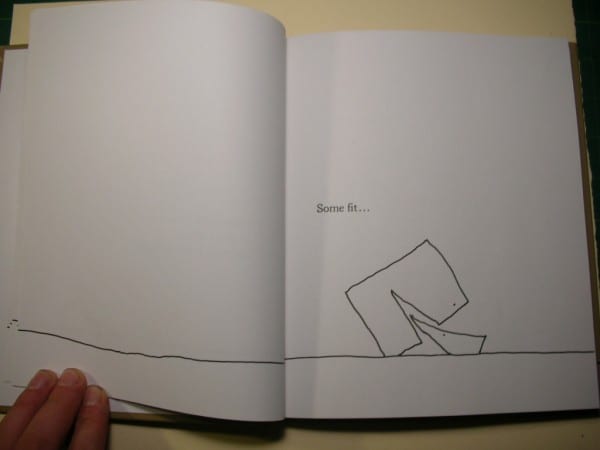 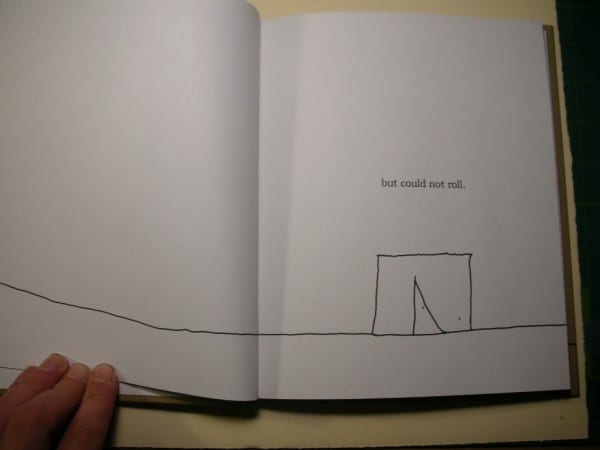 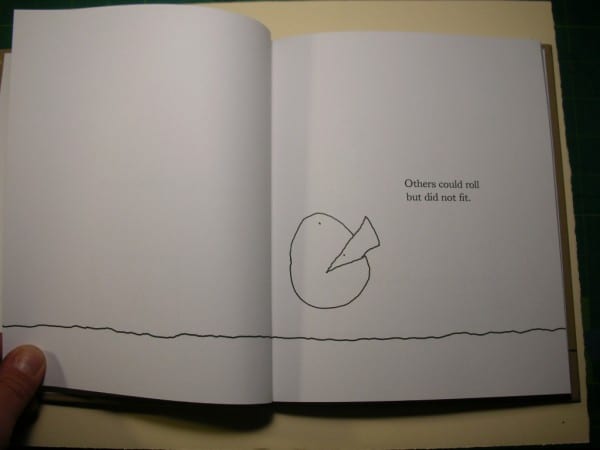 The Missing Piece Meets the Big O doesn't really "work" online if you line up all the spreads as a vertical scroll for all the obvious reasons. I mean, you can have digital page turns and all that - or a slideshow and it may have the same impression as reading a physical book with a page turn reveal. How did scrolling through it just now feel? The reveals are "ruined" because you can see the top of the next spread before you take in the preceding spread.

Bill Boichel's scroll-like comics that are essentially drawings done with one line would also be hard to make "work" as a series of spreads stacked up in a vertical scroll. These works were made to be read as books, obviously.

The reveals built into comic-book page turns of course read differently as a vertical scroll comic online. Dash Shaw’s Bodyworld comic is a great example of how to use the vertical scroll’s reveals and “page turns.” Bodyworld was made for the web and wasn't restricted by the page and the spread.

Ever see the video of the great David Hockney talking about scrolls? Check it out here.

Something also to consider is how a single page (traditional North American comics page ratio) is often seen online first as a thumbnail & then clicked on and seen as a fragmented top and bottom. We see the page fit on to our screens and then we scroll up and down while zooming in. 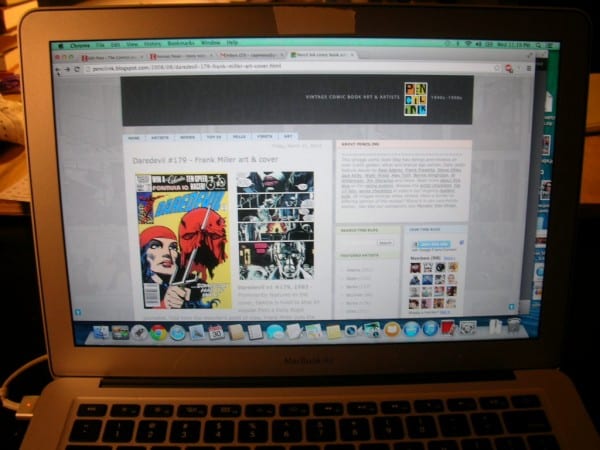 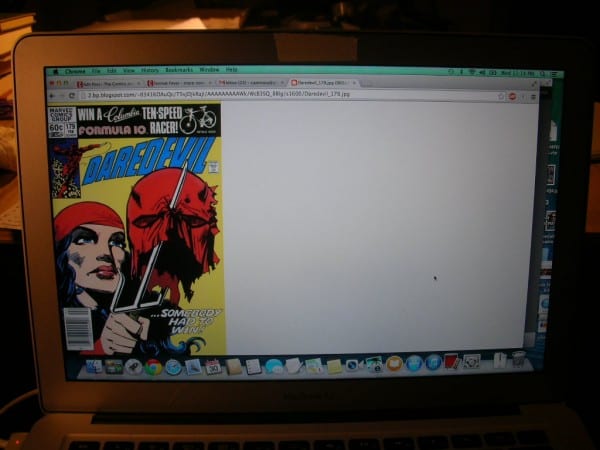 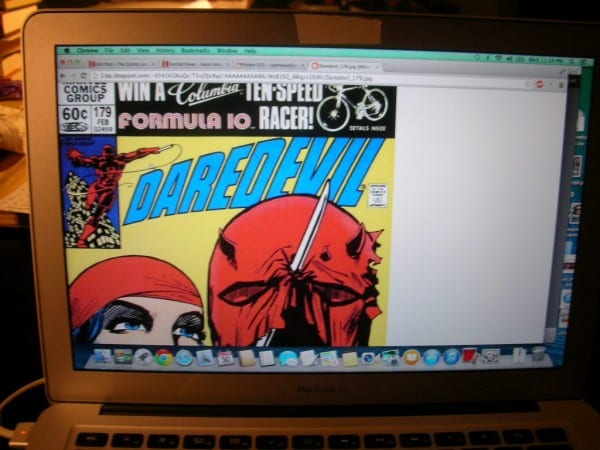 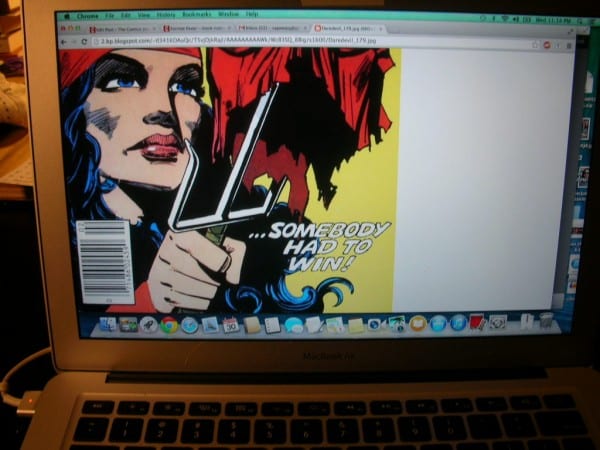 And of course on a tablet one can simply turn the device around so as to fit the screen better--with a laptop ye olde scroll and zoom is in effect. 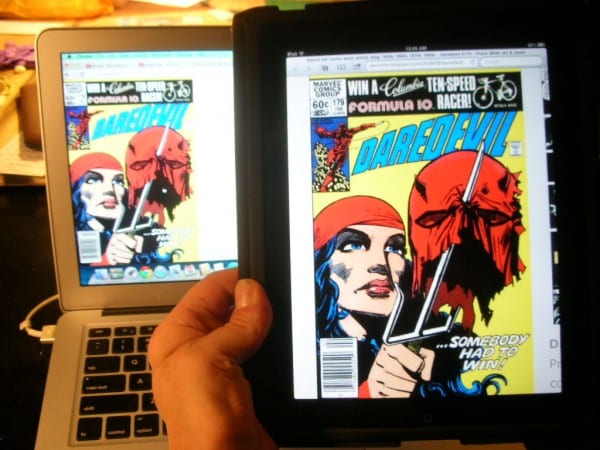 When I look up Dash's new Cosplayers comic, I see it fragmented at first (below). 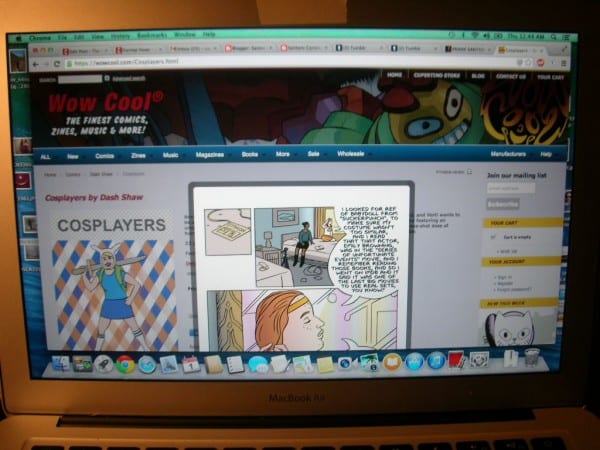 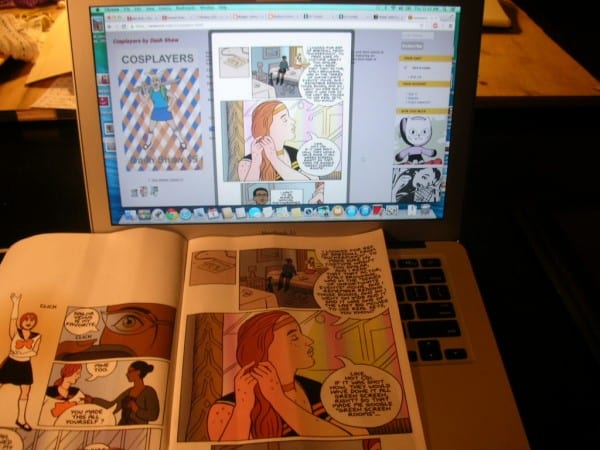 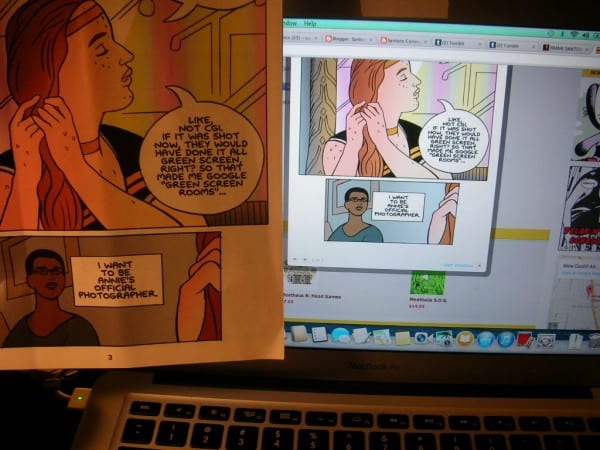 I've been thinking about how I see most new comics online first. A fragmented first glance. It's not often that a new book will show up at the shop and I'm seeing it for the first time "live." It's so easy to browse a book online now that I feel like I have read it (judged it?) before I ever lay my hands on it. That can be good or bad or neither; I just think about this stuff. Constantly. Why is it that some comics I read online first look great online and then look terrible in print? Is it just the printing or what? Some web comics I loved as, uh, something I read online then turned out to be awful as books. Stuff I see on Tumblr looks awesome then in a book it's "off" somehow.

When I get going in my head about this stuff, I think comic-book formatting is undergoing a seismic shift. It seems like modular approaches work best. Or at least increases one's chances of flitting easily between formats and devices. I'm thinking of Chester Brown's ability to remake any of his books into new formats because of the modularity of his approach. Same for the web--Brown could reformat The Playboy again for a phone screen and have yet another version of that book.

It’s interesting to think about how using a phone screen and the vertical scroll work well together. However, the landscape orientation of laptop computers makes vertical scrolling a little awkward at times. Vertical scroll formatted comics “work” with the proportions of the screen fine but (like I showed above) a normal comics page is often cut in half when seen at about life size. Tumblr becomes this thin river down the middle of a wide blue ocean & it makes me reconsider how well the vertical scroll “works” for me (on a laptop). On the tablet it is different because you can turn the tablet to fit a “portrait oriented” comics page. I’m sure all of this will be meaningless soon. Just thinking out loud.

Jacob Ciocci made a few scroll comics. They read left to right. They weren't made to be read online but they worked well online. Scrolling left to right and reading online was a little awkward yet it was better than the printed versions that had to be broken up into pages. Here’s an example of a printed one http://printx3.tumblr.com/post/24881360608/artist-jacob-ciocci-title-the-scroll-memories - I can’t find the ones that were on the paper rad website from a decade ago. Maybe someone can find it with the internet Wayback Machine.

I like looking at comics online. Seeing scrolls of comics that have page turn reveals "ruined" isn't a new thing I know. I just like thinking about how much it has changed the way I think we look at comics. And why we are seeing so many comics now being made, seemingly, for scroll format. Like this or this.

This sequence from http://thebristolboard.tumblr.com/ is interesting to me because I feel like the effect of the gags are "ruined" when looking at it as a scroll. I also know that I like looking at it because it is nice art and Tumblr is great for looking at nice art. So, I'm not complaining, I'm just saying that I look at more comics online in this scroll format than I do looking at physical comics and I look at a lot of comics. 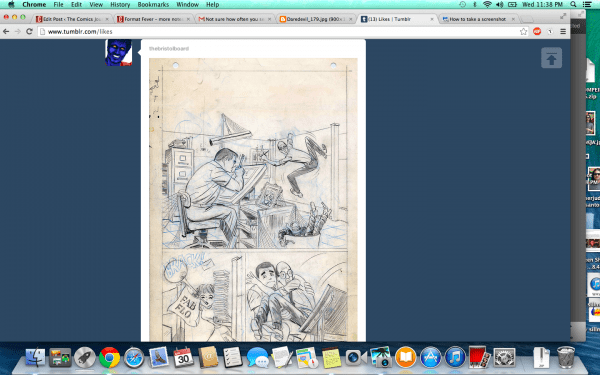 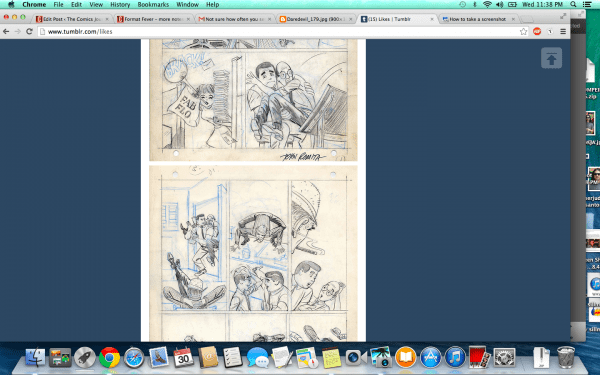 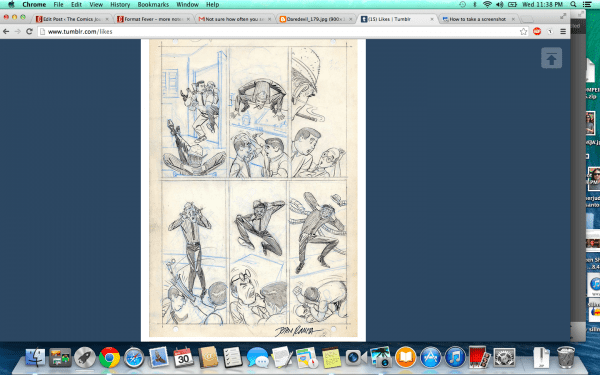 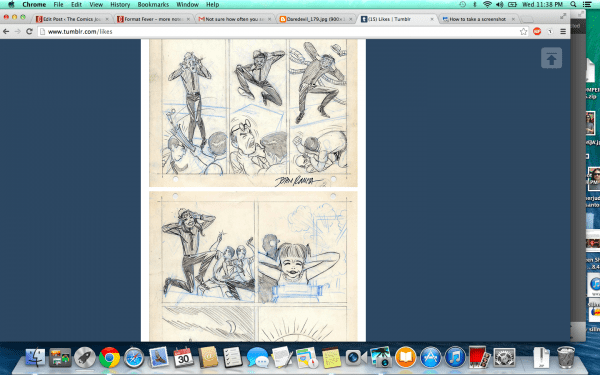 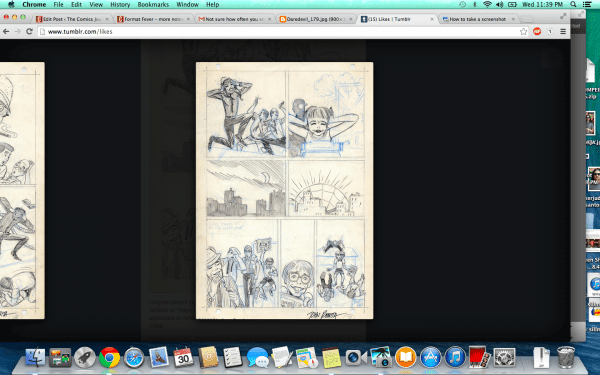 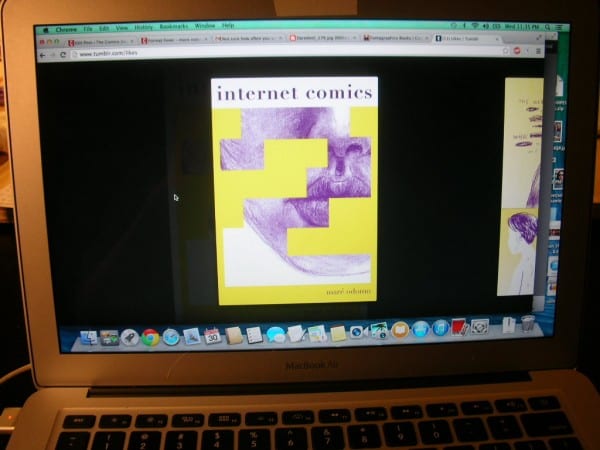 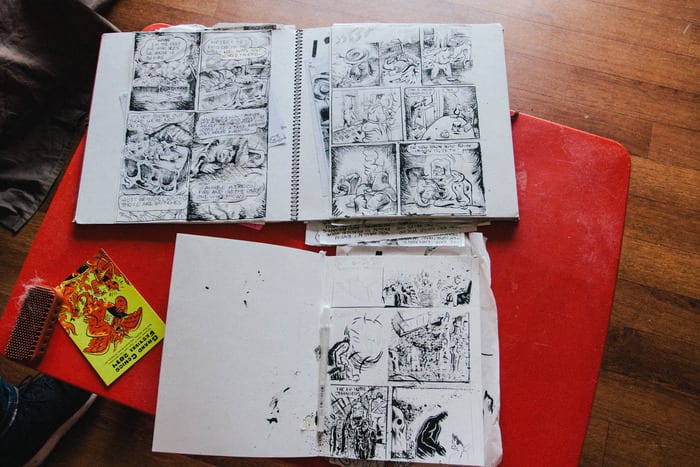 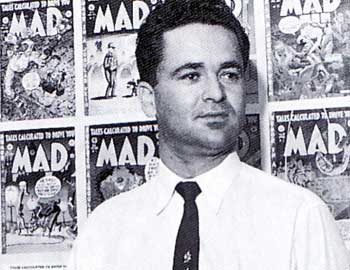