...it is the very unevenness of the resultant collection that makes this publication worthy of its new, reprinted form. Reading through the eighteen issues, which span twenty-two years in all, including a notable seven year gap between issues seven and eight, one gets the sense of a somewhat diverse body of women trying to navigate individual artistic modes, to find their voices and styles, while continually bumping up against what it means to be published in a venue that, by its very name, suggests marginality and difference. This collection is as much a historical document as anything else, tracing late-twentieth century representations of women’s issues – health, relationships, sexuality – as they are shaped by the times. In the first eight issues, for example, around the wake of the landmark Roe v. Wade decision, we get a number of sometimes pedantic, sometimes more artful accounts pivoting around women choosing to get legal or illegal abortions, and experiencing the consequences; following Stonewall and the early LGBT movement, we get stories of coming out, romances blossoming and sexual explorations thriving alongside newfound political consciousnesses, activist stirrings. In these issues, we also see early works by women who would come to dominate parts of the landscape of contemporary comics – short pieces by Diane Noomin, Roberta Gregory, Aline Kominsky-Crumb, Joyce Farmer, Lee Mars, and Sharon Rudahl (the list, as you might imagine, goes on).

And Frank Santoro is here with a write-up of Simon Hanselmann's latest collection.

The episodes on this collection take place during Megahex (according to the title page), and like the first Fantagraphics collection, the styles subtly change. I think it was smart to shuffle the on-model-ness of the episodes. What it does, I think, is give Simon the freedom to alter the style or approach as the episodes progress and the series expands. Time is less linear and more simultaneous. It's like an early episode of The Simpsons---when you see the early character designs you don't necessarily think it is happening at the beginning of Simpsons history. So regardless of when an episode in the Megahex and now Amsterdam collections were made, they all sort of jigsaw together into a refreshing smoothie on a summer day. And even if one episode sort of informs the following episode in terms of linear time, the ordering of the episodes in the new collection echoes my memory of the other episodes and feels expansive and so there's room for surreal character displays that aren't set there to drive the plot. The style sifts are not jarring and in fact help set each episode apart.

—News. Via a press release to CBR, DC has announced the "restructuring" of their Vertigo imprint, as well as the dismissal of editor Shelly Bond.

Bond has been with DC Comics and specifically Vertigo since 1993, the same year the imprint was formed. In her time at the company, she's worked on some of the most celebrated comics of the era including "The Sandman," "Sandman Mystery Theater," "The Invisibles," "Fables" and "iZombie." In 2012, Bond became Executive Editor of the Vertigo line, following the departure of longtime Vertigo head Karen Berger. Last year, Bond made the move with many of her colleagues to the west coast, as DC's editorial operations shifted from New York City to Burbank, California.

Nick Sousanis has won the Lynd Ward Prize for Unflattening.

“‘Unflattening,’” the jury noted, “is an innovative, multi-layered graphic novel about comics, art and visual thinking. The book’s ‘integrated landscape’ of image and text takes the reader on an Odyssean journey through multiple dimensions, inviting us to view the world from alternate visual vantage points. These perspectives are inspired by a broad range of ideas from astronomy, mathematics, optics, philosophy, ecology, art, literature, cultural studies and comics."

The caption reads, “For some reason, we weren’t appealing enough to those awful little bastards everyone hates.”

The craft of gag cartooning often overlooks the workmanship of the caption. In this case the whole amalgam of drawing and words is ignited by three words: “for some reason”.

—Interviews & Profiles. Ruben Bolling talks to children's book author and cartoonist Mo Willems about a new exhibit of his work.

“On one level, I want it to be established and proved that this work is art: legitimate, difficult, non-accidental. And on the other hand, I want to inspire kids to see that is achievable, easy, and worthwhile,” he explains. “The exhibit is not the point. The point is when the kid goes home and starts drawing his own drawings.”

And The Stranger profiles Simon Hanselmann.

I asked him how his year was going, and he said he'd been through some shit. He said he'd just gone through the "horrendously horrible" and lengthy visa process. Hanselmann was in a noise-music band called Horse Mania ("Horrible name," he said), but two weeks after Hanselmann got to Seattle, his bandmate of 10 years died. His art dealer, Alvin Buenaventura, died two weeks after that. "It's been a weird fucking time," he said.

He continued: "And my mom's got cancer. She told me a week before I moved. She's like, 'Don't feel guilty—don't stress about moving away.' But she clearly wants me to come back. I've just buried myself in work." 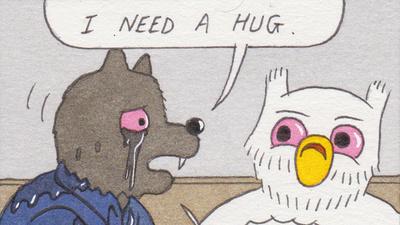 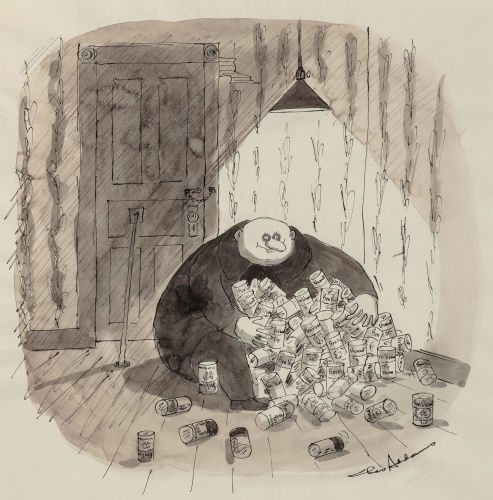