I’ll keep this week’s intro brief, mostly as I’m writing it while suffering under some exciting side-effects from Charles Pfizer’s COVID-19 vaccine, which, incidentally, do not in any way add positively to the experience of finally cracking into Kentaro Miura’s magnum opus, Berserk, let me tell you.

That particular endeavour will have to wait, but This Week’s Links, below, cannot, and urgently request your full and immediate attention!

Spying with my little eye… This week’s news.

• The Daily Cartoonist report on The New York Daily News’ editorial cartoonist, Bill Bramhall, being accused of racism, following publication of a cartoon attacking New York City mayoral candidate Andrew Yang - the cartoon having been altered for print publication, following earlier complaints levelled against its online version, and the usual “where does the line get drawn, metaphorically speaking” argument got roused from hibernation for another little trot around, just as a treat.

• Causing the shenanigans meter to make a high-pitched keening noise before failing entirely and issuing forth acrid black smoke, BOOM! Studios this week waded into the furore surrounding Disney’s alleged failure to pay royalties to various creators - Fleen rounds up the many ways in which this is best embodied by the Spider-Man pointing at Spider-Man meme. You know the one.

• Koyama Provides announced the latest recipient of their grant program, awarding $1,000 to Noel Freibert, which “will aid in the production costs of Halloween Baptism, the comic book follow up to 2020's Halloween Confession.”

• In memoriam, remembering those that the comics community lost recently, as here at TCJ Alex Grand has an obituary for writer and editor David Anthony Kraft who passed away last week, aged 68, an archive TCJ interview with whom can also be read here; Penelope Green writes for The New York Times on the life and work of Kathleen Andrews, instrumental executive at the Andrews McNeel Syndicate, who died on April 16th, aged 84; and Publisher’s Weekly shared the news that Dan Frank, editorial director at Pantheon since 1996, passed away this week, aged 67 - James Fallows has an obituary for The Atlantic.

Nothing but buzzer beaters… This week’s reviews.

• Matt Seneca reviews the towering darkness of Barry Windsor-Smith’s Monsters - “Despite the deep focus his artwork strives for, Windsor-Smith feels less intent on presenting the specifics of his narrative than its tone - one most often sumptuously gloomy. How Monsters hangs together as a plot, I think, is less important than the feeling passed on to its readers as they push slowly through hundreds of densely gridded, intricately drafted, balloon laden pages. I myself found it an overpowering experience of simultaneous disquiet and awe.”

• Brian Nicholson reviews the dissonant juxtapositions of Leomi Sadler’s Tummy Bugs - “This collection is oriented around the cute stuff, although cute is a relative term, and here the notion seems invoked with some irony. It’s a colorful thing, but the colors clash and overwhelm one another until they cancel each other out, like candy and fruit dissolving into stomach acids. Sadler enjoys an acrid palette.”

• Justin Harrison reviews the compelling eeriness of Jeremy Holt and George Schall’s Made in Korea #1.

• Avery Kaplan reviews the singular balance of Jeremy Holt and George Schall’s Made in Korea #1.

• Rebecca Burke reviews the unflinching detail of Didier Kassaï and Marc Ellison’s A House Without Windows.

• Lindsay Pereira reviews the intriguing dread of Adam Smith and Matt Fox's The Down River People.

Ryan C has reviews of:

- A pair of zines from Billy Mavreas - the inquisitive teasing of BVA and the practical rewards of drop.

- The brutal rawness of R. Kikuo Johnson's No One Else.

- The compassionate insights of Kristen Radtke's Seek You: A Journey Through American Loneliness.

- The claustrophobic excellence of Fido Nesti's adaptation of George Orwell's 1984.

- The disembodied menace of Margaret Kimball’s And Now I Spill The Family Secrets.

- The deft variations of Karl Stevens’ Penny: A Graphic Memoir.

I’m cheating on my wife with the green m&m. pic.twitter.com/OuYuP7dd1m

Joe Decie interviews Gareth Brookes about The Dancing Plague, appealing crowd-scenes, historical accuracy, and the meanings of materials - “I’m not sure the mediums I choose are harder, really. Embroidery is more time intensive than drawing, but I’m not sure it’s more labor intensive, it’s very meditative, portable and sociable. It never feels as much work as drawing. Using linocut and crayon, you have to accept the result you get. You can’t rub anything out. It’s all about letting go and having physical material surfaces do the work. Artists act like digital drawing is quick and efficient but we all know it’s way more work, all that undoing because you don’t want to show a bit of vulnerability.”

Chris Coplan talks to Glenn Head about Chartwell Manor, telling a story that needs to be told, the difficulty of openness, and the input of editors to the singular visions of indie comics.

• Kerry Vineberg interviews Jim Adkins about 555, 80s music videos, storytelling simplicity, and basically how you go about getting a comic made when you know nothing about making comics.

• Lindsay Pereira speaks with Joe Ollmann about Fictional Father, keeping things lo-fi, compassion and experience, and drawing as a means of entertainment.

• Andy Oliver interviews Shazleen Khan about Buuza!!, the teamwork of comics, starting at the end, and keeping the process easy.

Ian J. Battaglia talks to Keiler Roberts about My Begging Chart, intuition as to what makes it into an autobio comic, abandoning control to return to comics, and getting permission from your subjects.

Aaron Couch speaks with Duncan Jones and Alex de Campi about Madi, collaborative drives, crowdfunding realities, and what comes next.

Milton Griepp lets the Diamond Leadership Team talk up the distributor’s stability during a turbulent period for the market, oh, and that whole Penguin Random House thing. Your mileage may vary.

Roger Cohen speaks with Corinne Rey, aka Coco, about To Draw Again, the attack on the Charlie Hebdo offices, and the role of cartoonists.

Ernie Estrella talks to Jeremy Holt about Made in Korea, AI stories as adoption stories, exploring identity through storytelling, and pop culture influences.

• Kate Kosturski interviews Yvon Roy about Little Victories: Autism Through a Father’s Eyes, creative freedoms, the progress made in discussions around autism, and balancing accessibility and control.

Prose and cons… This week’s features and comics.

• Here at TCJ, Paul Tumey kicks off a new series focused on recent work in the small press and self-published comics scenes, and installment #1 of Zineth catches up with recent publications by Josh Simmons, Jeff Alford, Noah Van Sciver, Sarah Romano Diehl, and Drew Lerman - “It’s clear the small press comics scene has been impacted by the pandemic crisis when we have all been confined to our homes, more isolated than ever, while the government hands out relief money and kids are underfoot. The shrill anxiety, the fever rage at so many things going so wrong, and the screaming need to connect, have brought underground comics and zines to a place where they are more vital than ever. We support the artists by seeking out their comics and buying them online, and they support us by giving meaning to the waist-deep sludge around us, perhaps showing us a flickering candle flame in the inky black.”

• Also for TCJ, Tom Shapira looks back on Ronin, and just what Frank Miller was nailing to the mast with its fannish bombast - “Much of it -- most of it really -- is thanks to the coloring of Lynn Varley: the best of her generation, and a strong contender for the best of all time. Her work doesn’t merely ‘compliment’ the art – it gives it mood and texture. Miller’s pencils are mannered, Varley’s colors are alive. With her color choices she slows time, lightens the characters’ inner lives, and blows the reader’s mind on every other page. The 1980s were a peak period for colorists; not just in terms of talent (though one could argue for Varley, Tatjana Wood and Julia Lacquement as unsurpassable giants), but in terms of overall ideology. These works went for the big, overdramatic, neon-lit, garish, 'fuck realism' type. They didn't show how the world looked, they showed you how it felt.”

• Over at Shelfdust, as part of the Black Comics History series, Kenneth Laster looks back at Christopher Priest’s writing in The Falcon #1, and its problems with sexual harassment and misogyny.

• For NeoText, Chloe Maveal writes on the comics art of Ramona Fradon, and why the history books tend to mistakenly include her as a footnote.

• Mike Peterson rounds up a selection of political cartooning from the week, for The Daily Cartoonist, as history is written by the winners and/or losers, Roe v. Wade is once again in the firing line, and things go from bad to worse in general, to the benefit of some.

• In comics academia this week, over at Comics Forum, Jean-Matthieu Méon completes a three part essay on the valorization of woodcut novels, as key works are reprinted, and the medium rediscovered, with cultural links to comics history retroactively applied.

• Some recent longform works published by digital outlets, as, for The Nib, Maki Naro and Matthew Francis consider how you solve a problem like plutonium, and Meg O'Shea documents the struggles faced by female laborers in South Korea during the age of COVID-19; Kevin C. Pyle walks the border wall for The Los Angeles Times; LA Johnson and Eda Uzunlar continue NPR’s series of comics on educating during the pandemic, sharing the experiences of a teacher starting their career during the strangest of times; Shing Yin Khor decides what to write for Catapult; and Hyesu Lee makes plans for The Lily.

• A new edition of Thick Lines arrived this week, as Katie Skelly and Sally Madden sang the praises of Patrick Dean’s Eddie’s Week, discussed the best conventions and festivals, and reflected on Dean’s recent passing, and the comics community coming out strong for a GoFundMe to cover his hospice care costs.

• This weekend sees our next stop on the CanCAF tour arrive, as 2021’s Festival BD de Montréal takes place, with a variety of events taking place, and a full schedule available here.

• This week’s comics workshop from The Believer and The Black Mountain Institute saw Jamar Nicholas taking viewers through making comics with empathy, as well as sharing some stories of misadventure from emulating New York’s favourite web-slinger (starts around the 3m45s mark).

• Another variety pack week on Cartoonist Kayfabe, as Jim Rugg and Ed PIskor took a look at Blade of the Immortal, Raw #2, Richard Cummings’ Make Your Own Comics For Fun And For Profit, Star Wars: The Empire Strikes Back Artist’s Edition, and Jaime Hernandez’ WHOA, NELLIE!.

• David Harper was joined by Kyle Starks for this week's Off Panel, as they spoke about The Six Sidekicks of Trigger Keaton, the joys of 2020, the loss of the convention circuit, and basketball.

• Publisher’s Weekly’s More to Come caught up with the latest round of comics industry chaos this week, as Calvin Reid, Heidi MacDonald, and Kate Fitzsimons discussed what’s going on with the Big Two, and when we can expect to stand in a convention centre surrounded by a bewildering number of strangers again.

Last one, here's my cover for SUPERMAN: RED AND BLUE #6 -- pic.twitter.com/KXBm3DKLfp

That’s all for this week, back next time with an upgraded immune system, and plenty more links for a-clicking! 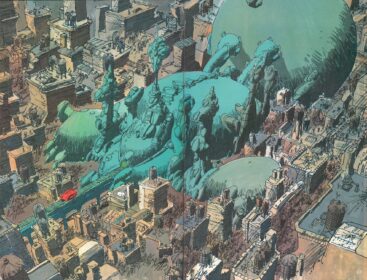 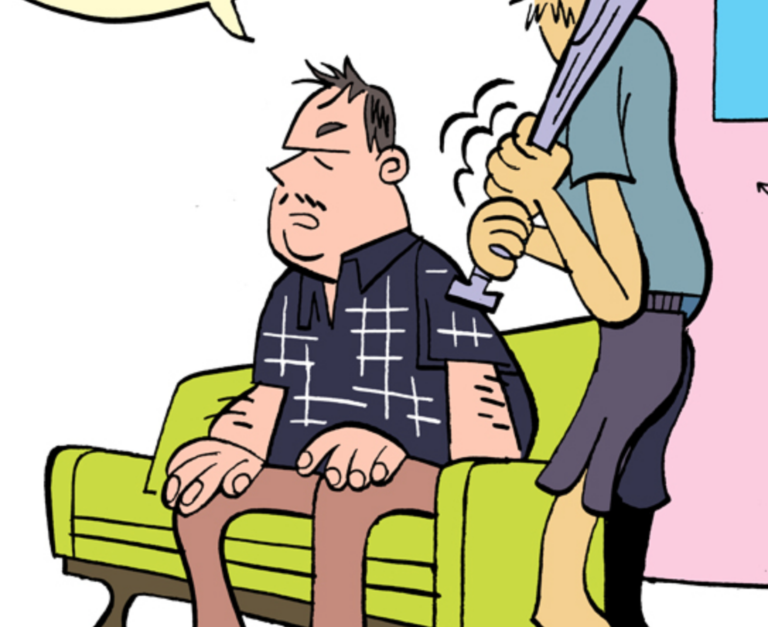