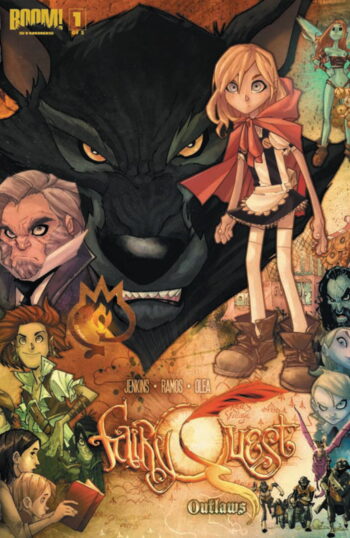 Can we please declare a moratorium on mix-and-match fairy tale pastiche, especially the kind with obvious franchise ambitions?

I bought Fairy Quest: Outlaws #1 not knowing that it was the first half of a floppy serialization of a self-published hardcover album that already came out some time ago, or that a reprinting of said album was the rationale for a (I gather) very successful Kickstarter campaign. All I knew was that it was a slick fairy tale-inspired comic book with a style that reminded me of both shonen manga and Disney (by way of Cliffhanger/Joe Madureira/J. Scott Campbell) and production values that reminded me of mainstream European BD (there is a French edition from Glénat), and that it was shelved in the “all ages” section of my local shop, right near the front door. Okay, I thought, I’ve studied fairy tales, I teach them, and I’m on the lookout for children’s comics—so, this must be meant for me, yes?

If I had spent more than a moment with Outlaws #1 in the shop—if I had bothered to read the first page or two, rather than simply ogle the book—I probably would have put the book down and not looked back. The first page is done in illustrated book fashion and shows a wee tyke urging his scrumptious mother for a bedtime story, with alternating typefaces representing the voices of mother, child, and omniscient narrator: 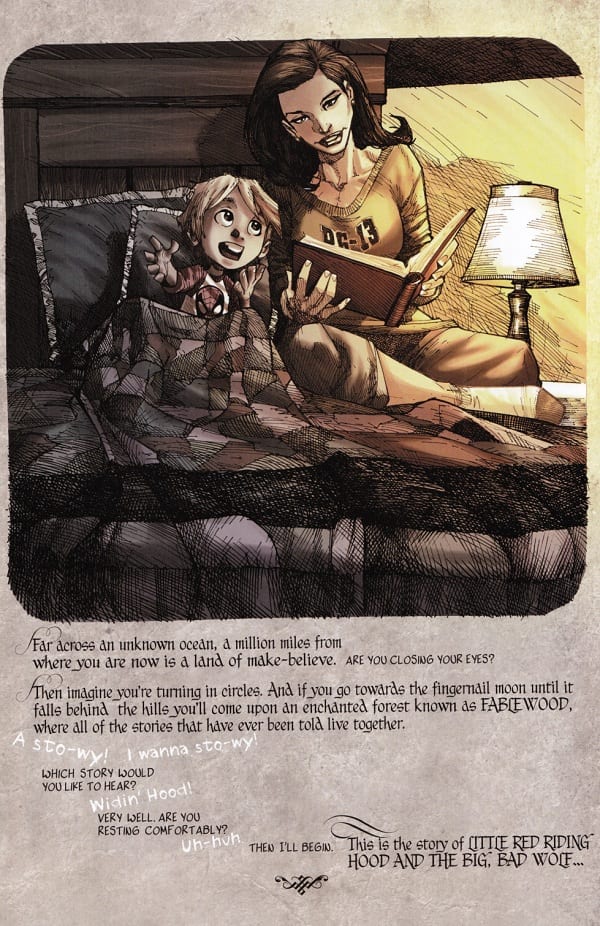 The child’s voice is written in an excruciating, unwitting parody of a child’s voice, thusly: “A sto-wy! I wanna sto-wy!” Oh dear.

Now, I’ve got nothing against conversational bedtime reading; it’s a wonderful pastime that my wife and I still indulge in, despite the fact that our kids are both college age. This brief framing device, though, accomplishes nothing except to swaddle the tale in convention and suggest an impoverished and clichéd understanding of both bedtime reading and fairy tales. The rest of the book does nothing to allay my sense that the authors’ notion of fairy tales and of childhood alike is flat, banal, and averse to any complexity.

Am I guilty of flogging a minor point needlessly? Perhaps I’m in thrall to a pet peeve, and not seeing the comic as a whole. Yet the scripting remains merely functional across the board, and, despite the comic’s bid to rewire old fairy tale characters and give them new life and dimension, the characterization never rises above slapping a Trait onto each featured player: spunk, or grumpiness, or (for the villain) icy calculation. We’ve seen these sorts of characters again and again—which is ordinarily no criticism at all when it comes to fairy tales, but since Fairy Quest is about characters seeking to break out of their familiar stories and live more freely, it’s a shame that none of these characters is actually allowed to stretch. These are (in the semiotics sense) actants, not individualized actors, their function played out at a breathless, unconsidered pace.

The premise leans hard in the direction of Fables, complete with a setting called Fablewood “where all of the stories that have ever been told live together” (compare Fables’s Fabletown—or, for that matter, Once Upon a Time’s Storybrooke, though, to be fair, work on Fairy Quest predates the launch of that show). The twist here, besides the fact that Fairy Quest aims to avoid the barefaced adultness of Fables, is that, instead of familiar characters being run out of their Homelands by an evil Adversary, this book has familiar characters trying to get out of their homeworld for freedom’s sake. Fablewood is a dystopia, suffering under the despotic bureaucracy of a “Mister Grimm,” a narrative traditionalist whose mantra is “Keep your story straight—do not deviate!” Grimm runs the storybook world like a police state, issuing penalties and punishments for every departure from the conventional narrative logic. As the oft-invoked words “straight” and “deviancy” suggest, there’s potential for social commentary here (recalling, perhaps, Pleasantville, with its conflict between “black and white” and “colored” citizens). The authors, however, don’t rise to their own bait, and the implications of the premise remain unexplored.

Perhaps I should be grateful for that, given the number of formulaically “dark,” dystopic takes on fairy tales and old storybooks that comics have offered up (lately we all seem to be living in a world designed by American McGee). But Fairy Quest is generic in the most tiring way. Reading it reminded me of Underwhere, another deluxe yet underwhelming fantasy comic Paul Jenkins was involved in some years ago: all the expected pieces are there, but nothing new leaps out. There is beautiful cartooning on display, but nothing makes extraordinary demands of authors or readers.

The plot—er, spoiler alert—concerns how the two leads, Red Riding Hood and Mister Woof (the wolf), run afoul of Grimm and his “Think Police” and try to flee Fablewood, only to encounter Peter Pan and the Lost Boys by issue’s end. Red has spunk, Woof has the grumps, and Grimm is evil. There’s a touch of steampunk, as Grimm uses the “Mind Eraser” and other forms of tech to impose order and (in the manner of a Ticktockman) a rigid sense of time and schedule. There’s a confusing action-filled climax in which mechanical “chessmen” on a giant board try to take out Red and Mr. Woof. They don’t. Mostly there are opportunities for Humberto Ramos to draw up a storm, and he does.

I like the elasticity and snap of Ramos’s cartooning, the chipper, Disneyesque character designs (which register very clearly), and his fearlessness around a comic book page. His storytelling, however, might have been better served by less ingenuity and more clarity. Greater attention to the narrative focus of each page, a bit of unpacking for pace and clarity, and, at times, a simpler offset grid rather than Ramos’s dynamics layouts—these would have benefited action and characterization. The book has a dense, tricked-up quality, intensified by the design work, coloring, and lettering of Leonardo Olea, who is every inch Ramos’s co-artist but whose effects are sometimes slathered on so thickly as to stop me dead. 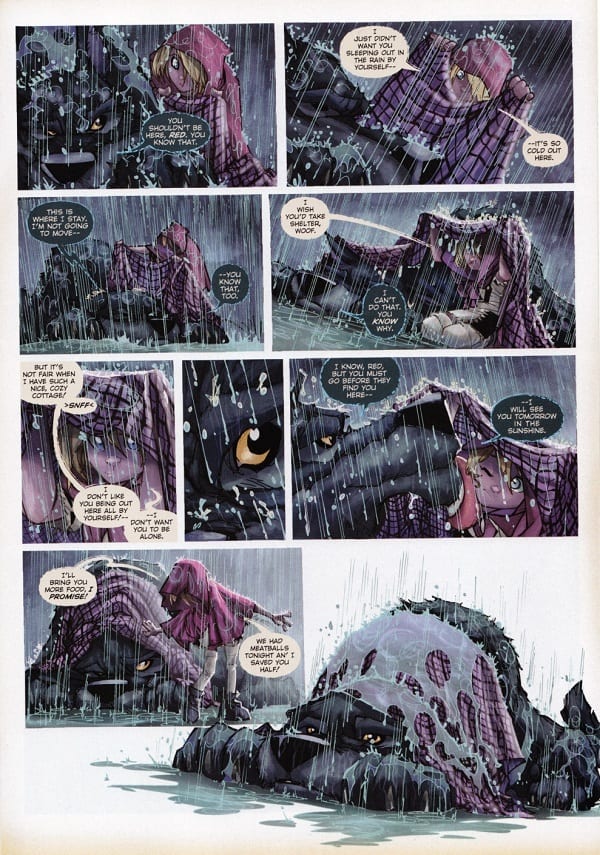 Olea supplies a gorgeously, distractingly, worked-up surface, dappling the pages with digital light, shade, and texture. A scene set in a storm (above) is so blanketed with rain FX that I had some trouble parsing the action—there's lots of icing here, but what sort of cake? This quality has been worsened by, I believe, a downsizing from the original album edition: the lettering is tight and tiny, some of the panels are small beyond small, and the pages don’t seem to have been formatted for standard comic book size. The result is baroque, lovingly rendered, and cloying.

I admit, I’m picking on Fairy Quest because its faults are pretty common. In this new Golden Age of children’s graphic books, the new model children’s fantasy is often something like Fairy Quest, marked by tissue-thin characterization, idealized and unexamined attitudes toward childhood, gimmicky premises whose implications are never sounded deeply, and none of the subversiveness, wit, formal playfulness, or hard-won wisdom that I’ve learned to expect from the best of children’s texts. Fairy Quest takes a doggedly conventional approach to its subject matter (not so unlike that of Mr. Grimm), and doesn’t explore character, concept, or moral or ideological ripples with any determined outlook or conviction. It’s mainly an occasion for Ramos to draw—a superfluity of detail layered over a frail, generic premise. The unvarnished joys, provocations, and terrors of fairy tales are nowhere in evidence. 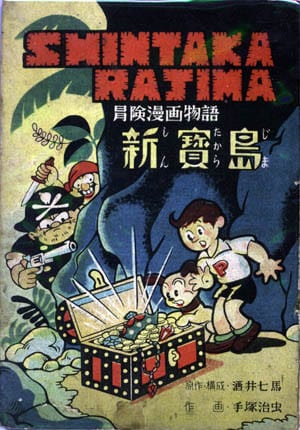 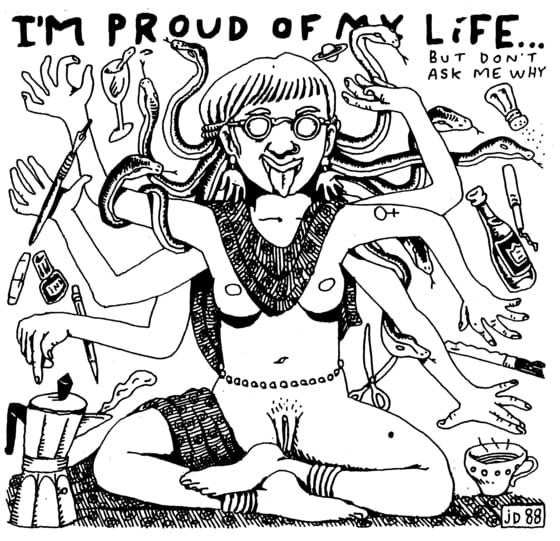 Don’t Ask Me Why