Everybody misunderstands Seth. Popular mythology has pegged the cartoonist as a nostalgist hankering over the lost past. In fact, Seth is a fantastist obsessed not with the world-that-was but rather the world-as-it-might-have-been. The past is interesting to Seth not for its own sake but as a stage and stockroom for his imagination, an amply furnished playground for his world-building activities. He is at his giddiest working in the blurry zone where between history and fiction where actual people and places interact with imaginative constructs, where fragmentary information opens up exciting hypothetical possibilities.

Of course, the myth of Seth as a nostalgist originates in the cartoonist’s own presentation of himself, both in his supposedly autobiographical works and in real life dress and deportment. But here again, there is a widespread misconception. That old-timey look is simply an easy way of being a dandy, which is to say someone who uses their outward carriage as an opportunity for entertaining display. Dandyism is a species of fantasy.

The key to Seth’s modus operandi was already present in his first graphic novel It’s a Good Life, If You Don’t Weaken. At first glace this book appears to be an autobiographical account of Seth’s search for a neglected cartoonist but as it turns out the autobiographical pretext was a smokescreen and a diversion. The book is actually a fable about how the search for aesthetic ancestors is a way for an artist to forge (in every sense of the word) a new identity. 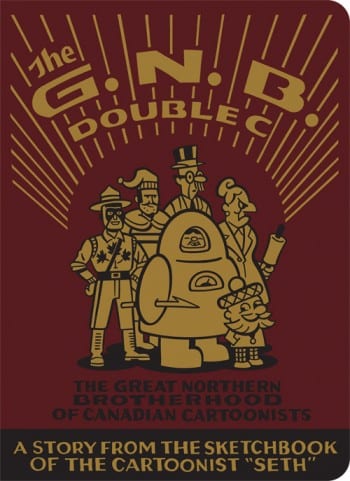 I’ve written in the past about the process whereby cartoonists invent their ancestors. I meant by that something very banal and literal: the cultural recuperation of Frank King by Chris Ware and Doug Wright by Seth, both cases where the cartoonist being recovered can now be seen as a predecessor of their later-day champion. But Seth has been engaged in the task of inventing ancestors in a more imaginative way as well. In both A Good Life and in The Great Northern Brotherhood of Canadian Cartoonists (or The G.N.B. Double C) Seth very convincingly makes up cartoonists who serve as role-models for the type of work he wants to do.

An astute review of Good Life likened it to Borges, who invented fictions about fiction, making up stories about non-existent books found on the shelves of an impossible library and a dishonest encyclopedia that changes reality. Aside from Borges there is an entire cluster of authors that Seth could usefully be connected to, whose major commonality is that they fuse fact with fiction, creating fabulations that mimic historical reconstruction or autobiography. I’m thinking here of the Stanislaw Lem who reviewed books he himself had imagined, the W.G. Sebald whose novels read like essays, and the Guy Davenport who used his own notebook entries to substantiate his stories of a made up Dutch philosopher.

Davenport once described his stories as "assemblages of fact and necessary fiction" – a description that applies nicely to Seth and Sebald as well. The conflation of fact and fiction is paralleled by the mixture of the essay form with fiction, a gambit that Seth is increasingly fond of (as witness his “Jocko the Scotsman” story in Canadian Notes and Queries #82).

These writers all use tactics that have parallels in Seth’s work, although it’s a mistake to see them as influences. He only started reading a few of them after he had been long set in his artistic practice. In a sense, they too are invented ancestors.

One other literary legacy is worth pointing out: the tradition of the unreliable narrator. This is a venerable form of storytelling, with roots in Homer but more recently taken to a level of extreme complexity by Henry James, Ford Madox Ford, and Vladimir Nabokov. But, as Robert Fulford has noticed, Seth has added his own wrinkle to this hand-me-down narrative mode by creating unreliable narrators who freely admit to their own dishonesty or shaky grasp on reality. Such are the narrative voices of both George Sprott and The G.N.B. Double C. The raconteur who freely fesses up to his own fibs and foibles is an especially useful device if you are interested in exploring the no-man’s-land between real history and history- as-it-might-have-been, the exciting gap between the documentary record and the glimmers of suggestive and conjectural possibility that these records provoke.

The narrator of The G.N.B. Double C is a romancer who paints a too glamorous picture of the past, as he himself admits. As such, he both articulates and represents the way that history and fantasy can merge together.

Part of the fascination of The G.N.B. Double C is that we’re never sure what ground we’re standing on as we read it. It is never clear if Seth (or the Sethian narrator) is telling us the real history of Canadian cartoons or aspirational day dreams of what should have been. The weave of actuality and make-believe is surprisingly tight, with some seemingly absurd vignettes and improbable characters closely mirroring events and people who really existed.

Here is a stellar examples: We’re told that the first comic book produced in Canada was created by Marquis Townsend, the third in command of General James Wolfe, the British military hero who conquered French Canada in the Plains of Abraham in 1759. By Seth’s account, Townshend did a little booklet called General Fox making fun of his commanding officer, a rare volume that was only re-discovered in the late 20th century.

Those not up on Canadian history might need to be told that James Wolfe was real. The drawing of his death that takes up the bottom three panels on page 87 of The G.N.B. Double C is an imitation of the well-known painting The Death of General Wolfe by Benjamin West. George Townshend was also a real British officer and was also a talented caricaturist who used his pen to mock his commanding officer. Townshend’s drawings are considered among the earliest cartoons in North America. So far, Seth’s account is completely in keeping with the historical record.

But so far as I can ascertain, no such book as General Fox exists in our world. But such a book could have existed and been lost, which is why this story excites Seth’s imagination. It’s the potential existence of this book, something that’s not real but not impossible, that gives Seth’s fancy room to play and a chance to conjure up an enticing volume that is just beyond our reach.

The G.N.B. Double C is neither history nor is it quite fiction, rather it is a world-building fabulation, the use of discrete elements of our world to create a plausible fictional reality with its own sense of the past.

Described in this light, The G.N.B. Double C can be seen as offspring of science fiction, an alternative history. Seth has long had a sci-fi side to him which generally gets neglected. It peeps up here and there in his praise for the “'60s futurism” of the Montreal Expo as well as his journeyman work on the Mr. X series. In keeping with his temperament, his interest in science fiction isn’t so much a matter of the future that will happen but rather the retro-future that was once imagined but never came to fruition, the future of moving side-walks and jet packs which is now itself a part of history.

The wonderful igloo-shaped archives of the G.N.B.C.C., which is almost impossible to get to because it’s so far north, is a perfect metaphor for the type of historical knowledge Seth is most interested in. He’s fascinated by the tidbits of the past that are just beyond our reach, the fragments of lost works that point to a richness we can imagine but never recover.

If we accept The G.N.B. Double C as a world-building fabulation, it’s interesting to re-read it with an eye towards which aspects of history Seth has taken and transformed. Here are a few notes I made as I read the book:

1) The Kao-Kuk comic book on the inside front cover seemed very reminiscent of Kirby’s science fiction and monster comics from the late 1950s.

3) The actual Laurier quote that gets played with on page 24 is, “The 20th century belongs to Canada."

4) Page 25: Trudeau’s parting shot was actually a twist on a famous Nixon comment. Trudeau told the press, “I regret I won’t have you to kick around anymore.”

5) On page 42, the reference to Father Robert, a comic strip that ran in the large-circulation Quebecois farm magazine Habitant, is a play on the fact that Albert Chartier drew a lovely monthly comic strip Onesime for Le Bulletin des Agriculteurs.

6) The story of the "Death of Kao-kuk" told on pages 47 to 55 echoes a Superman story called "Captive of the Red Sun" (1963), apparently created by Edmond Hamilton and Curt Swan, from Action Comics #300.

7) Page 92-94. Thoreau Macdonald did keep a prose diary, which has been published, as against the unpublished cartoon diary mentioned here.

8) The avant-garde cartoonist Henry Pefferlaw seems to be a fictional counterpart to the real-life Martin Vaughn-James, who did some groundbreaking experimental comics in the 1970s and 1980s.

9) Sam Middlesex, the barber who becomes a cartoonist is of some biographical interest because Seth’s wife is a barber. Middlesex himself seems to be a mixture of Frank King and the Canadian novelist Hugh Hood, who wrote a twelve-volume roman fleuve called The New Age/Le nouveau siècle tracing the history of Southern Ontario and Quebec in the 20th century.

10) The G.N.B.C.C. as a whole seems to operate very much like the National Cartoonist Society. The whole elaborate awards ceremony of the G.N.B.C.C. also prefigures the Doug Wright Awards that Seth would co-create (the book being conceived before the DWA), just as Seth’s fictional search for Kalo anticipated before the fact his actual research into the lives of sundry old Canadian cartoonists.

Individually these tidbits about the historical basis for The G.N.B. Double C are only of minor interest but taken together they help give us a sense of the game Seth is playing. He’s making up a history of things that mostly didn’t happen but he wants to build his fantasy on a bedrock of plausibility and facticity. History and fantasy are not polar extremes for Seth. They exist as a joined pair, in constant dialogue. What many see as Seth’s incurable nostalgia is in fact his way of fertilizing his imagination, of empowering his world-building activities with the inexhaustibility of the real. 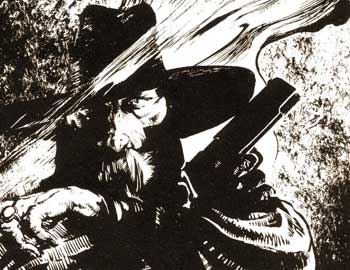 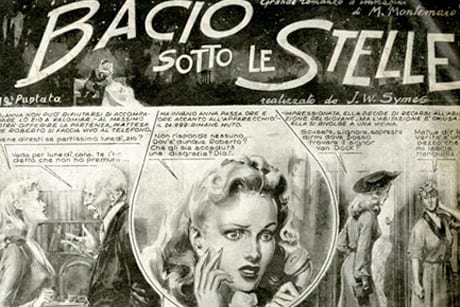