There was also a palindromic date, which was a nice distraction from everything for a nanosecond, I guess? Hoo boy.

Moving right along… This week’s news.

• Checking in with the ongoing issues surrounding paper supplies and logistics, and a strike at Finnish paper mills that began on January 1st has been extended to March 12th, exacerbating existing problems that have led to widespread shortages. Ripple effects are being seen by the printing industry, and beyond, with many comics publishers already having had to delay books or reduce print runs prior to this, due to the continuing dearth of physical materials, including inks and printing plates.

• Publisher's Weekly reports that Gina Gagliano, former publishing director of Random House Graphic, will be the Boston Book Festival's new executive director, and is quoted as saying "[Festivals] have the potential to connect and bring together all the parts of a city’s literary landscape—authors, artists, teachers, librarians, publishers, bookstores, comic book stores—to share the love of books and reading directly with readers.” Hear, hear.

• A slight variation on auction news this week, as the New York Times reports that you will soon be able to own shares in a copy of Batman #1, valued at $1.8m, but no word yet as to whether this is related to the announcement that billionaire playboy Bruce Wayne is planning an IPO for Wayne Enterprises.

• Koyama Provides announced the latest recipient of their grant program, awarding $1,500 to Leela Corman, which will “enable me to begin my next book project, The World Before It Ends, a multigenerational family story set in two different times and countries.”

• In memoriam, remembering those the comics world has lost, as it was announced that comics writer, novelist, and poet Tom Veitch has passed away, aged 80, due to complications related to COVID-19 - Rick Veitch provided an obituary here at TCJ; comic artist Miguel Ángel Sanjurjo passed away earlier this month - Ricardo Serrano Denis wrote on his comics work and support for the Puerto Rican indie comics scene for The Beat; and news was shared that mangaka and academic Kazuyoshi Torii, creator of Toilet Hakase, passed away earlier this month, aged 75, due to pancreatic cancer.

• Leonard Pierce reviews the chaotic symbolism of Nick Francis Potter’s Big Gorgeous Jazz Machine - “What, then, does it all mean? It’s poetry of the word and poetry of the image, and thus doubly elusive and doubly difficult to critique in any meaningful way. Recalling Eliot’s admonition that poetry is an arresting of the personality and the emotions rather than a loosing of them, I am struck by Potter’s ability to reign in the tumult he has created; but I am also frustrated at the times when he seems to fail in that effort and give up.”

• Tom Shapira reviews the grand vastness of Lane Yates and Erika Price’s Ursula - “What’s particularly impressive about this piece, and about Ursula as a whole, is the way the characters are drawn on almost even keel with the background while onboard the ship. Several times they appear to almost get swallowed by it, becoming part of the architecture (becoming lost in the world), but never to a degree beyond the artist’s control. We always know what the comic wants us to know - nothing more, nothing less.”

• Ian Thomas reviews the messy truths of Clio Isadora’s Sour Pickles - “Sour Pickles reads very much like a debut book and succeeds because of its shaggy assemblage, not in spite of it. Its component pieces vary in length and tone, showing its protagonist in various lights and from various angles in a way that feels real.”

• John Schaidler reviews the captivating astuteness of Darryl Cunningham's Putin’s Russia: The Rise of a Dictator.

Andy Oliver reviews the balanced structuring of Feff Silvers’ The Final Lullaby, the sensual triumph of Trinidad Escobar’s Arrive in My Hands, and the impressive visuals of Ali Hodgson's Jumping Mouse Volume 1.

Ryan C reviews the labyrinthine details of Bruce Zeines’ Life Out Of Sequence, the addictive craziness of Andrew Zakolodny’s Deadnauts, the impressive beauty of Alexander Laird’s Oubliette, and the squiggly fun of Desmond Reed's Apples.

- The thought-provoking exploration of Rhea Ewing’s Fine: A Comic About Gender.

- The vivid delights of John Chad’s Pinball: A Graphic History of the Silver Ball.

- The jubilant reminiscences of Edo Brenes’ Memories from Limón.

I got to draw Judge Hershey for the 45 YEARS OF 2000 AD art book! You can grab a print as part of the webshop edition. https://t.co/5nf02DuYE4 Out May 25. pic.twitter.com/kpMDaRgX8e

Drowning out the voices… This week’s interviews.

Aug Stone interviews Ralf König about Lucky Luke: Swiss Bliss, early comics memories, high-quality chocolate, and underground comix influences - “No, I don't see it as controversial either. But someone who has problems with gay cowboys will see it differently. Of course it's about homophobia, but to me the joke is more important. I'm not a queer activist. I'm a comic artist and gay, so I draw comics from my gay point of view. I don't want to lecture or enlighten anyone, but of course I don't mind if that happens.”

• Sean Z talks to Kickstarter COO Sean Leow about the platform’s recent problems after announcing blockchain integration, and some supposed justifications are provided for this move.

Lindsay Pereira chats with Darryl Cunningham about Putin’s Russia: The Rise of a Dictator, picking big subjects for books, eschewing cartooniness, and the problem with billionaires.

Cayla Coats interviews Tony Weaver Jr. about The Uncommons, embracing weirdness, and the importance of a good pitch.

Mallory Yu interviews Brian K Vaughan about Saga’s return, bringing readers back up to speed, too many redheads, and the dichotomy of violence in media.

Wendy Browne interviews C. Spike Trotman about The Poorcraft Cookbook, leaving Kickstarter, and the moral decisions that go into engaging with tech startups.

Words worth a million pictures… This week’s features and longreads.

• Here at TCJ, David Roach documents the process behind creating the Judge Dredd By Brian Bolland Apex Edition, and how you go about reuniting original artwork that has long since made its way out into the wider collectors community - “Once a page had been found, the process of acquiring a scan could begin; this is a highly complex, delicate procedure, known in the business as shameless begging, and might involve selling the book's concept (which often worked), asking very nicely, or offering inducements. I’d say as a rough estimate each page in the book required 10 e-mails to acquire it.”

• Over at NeoText it’s a similarly 2000 AD flavoured week, as Chloe Maveal writes in celebration of the Galaxy’s Greatest Comic’s 45th birthday and why its appeal has endured for so long, while Robert Smith looks back on the life and work of Martin Emond and the singular artistic legacy he created.

• For The Nation, Tom Engelhardt writes on the process of getting Art Spiegelman’s Maus published, and why its removal from school curricula in Tennessee is such a counter-productive move in 2022.

• Over at AIPT, Stephanie Kemmerer continues a look at the real life inspirations behind James Tynion IV and Martin Simmonds’ The Department of Truth, bringing us the second discussion of MK-Ultra of the week. Just because you’re paranoid, doesn’t mean they’re not after you.

• For Solrad, Hagai Palevsky writes on Martin Vaughn-James’ The Cage, its place in the experimental comics pantheon, and collapsing the quantum wave function of reality and its Creator.

• Elizabeth Sandifer’s Last War In Albion continues, and there are recent chapters to be read on the Doom Patrol’s descent into and ascent back out of inscrutable weirdness, and the one degree of Kevin Bacon that the book gives to Illuminatus! and Frank ‘The Punisher’ Castle.

• Also continuing is Joe Muszynski’s Never-Ending Road to Ragnarok for Sequart, looking back on The Mighty Thor #268, and the lessons to be learned from King Dionysus’ treatment of Damocles.

• Over at ICv2 Rob Salkowitz rounds up the ongoing upheavals, for good and ill, to be found on the doorsteps of tech platforms Webtoon and Kickstarter, who have both taken turns to be the main character of the internet at various points in the last 6 months.

• For The Middle Spaces, Dr. Brandi Estey-Burtt writes on Matt Huynh’s adaptation of Nam Le’s The Boat, and how digital comics can engage with and interrogate a reader’s experiences in contrast to those depicted within a story, especially regarding issues faced by refugees and migrants.

• Ahead of its reprint in support of the Hero Initiative, over at From Cover to Cover, Scott Cederlund writes in celebration of George Pérez' work in JLA/Avengers, and its embodiment of the best possible version of a classic superhero crossover.

• Mike Peterson rounds up the editorial beat, over at The Daily Cartoonist, as the week’s news saw a 7-10 split between supply chain issues and Russia’s continued aggression towards Ukraine.

• Just a quick note at the end here to flag up that Bubbles has launched a 3-issue subscription offer, for those wanting to buy zines in bulk, and who wouldn’t?

• Opening this week’s selection with a virtual event that you can watch this very afternoon, as Robert Crumb and Aline Kominsky-Crumb join Dan Nadel to talk about the life and work of Spain Rodriguez, part of Hard-Ass Friday Nite: The Art of Spain Rodriguez, open now at the Andrew Edlin Gallery.

• Mangasplaining returned to one of the big-hitters this week, as Christopher Butcher hosted this week’s discussion of, and singing the praises of, Katsuhiro Otomo’s Akira Volume 3, in the penultimate episode of season 2.

• Brian Hibbs welcomed Ivan Cohen and Sholly Fisch to this month’s Comics Experience Kids GN of the Month Club, to discuss Batman & Scooby Doo Mysteries, and the ins and outs of working on licensed properties.

• House to Astonish returned with a fresh episode, and Al Kennedy and Paul O’Brien had plenty of comics news to catch up on, including comiXology’s recent debacle, upcoming books from across the direct market, and remembrances for Ian Kennedy and Tom Veitch.

• Publisher’s Weekly’s More to Come also covered the recent (comics) news of the day, including tech snafu’s, 2021 sales figures, and Penguin Random House’s apparent move to have Maus taken down from the Internet Archive.

• SILENCE! returned with a new episode, as Gary Lactus and The Beast Must Die discussed some new comics and some old comics, a classic telling off from Pat Mills, and dived headlong into the world of Roger Hargreaves’ Mr. Men, as you do.

• David Harper welcomed Christian Ward to this week’s edition of Off Panel, as they discussed Aquaman: Andromeda and Blood Stained Teeth, and the realities of underwater monarchs and vampirism.

• Closing the week out with the recent selection from Cartoonist Kayfabe, as Ed Piskor and Jim Rugg took a look at various Frank Castle appearances with Amazing Spider-Man #129’s introduction of the Punisher, and crossovers between Castle and Logan in The Punisher: War Journal #7 and  Marvel Knights: The Punisher #16 & 17, plus The Rocketeer, Jim Trombetta’s Comic Books the Government Didn't Want You to Read, comics coverage in Print, and a little bit more McFarlane deposition.

From now until the end of March, all purchases of Threshold by Vincent Romero Gladnick will be donated to @TransTexas

Link to purchase below. pic.twitter.com/OdCIqctv1m

That’s your lot for this week, back next week with more, and bloodshot eyes from mainlining rolling news, the only way to live. 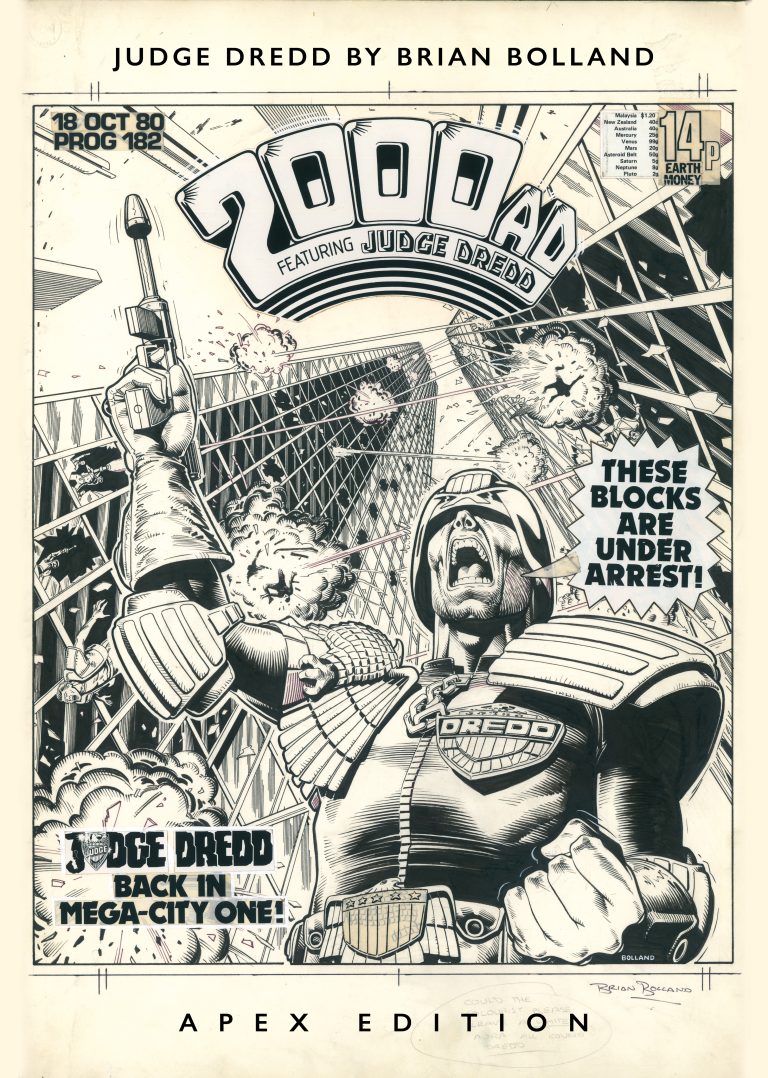 Creating the Judge Dredd by Brian Bolland Apex Edition: A How-to Guide for the Rash and Enthusiastic 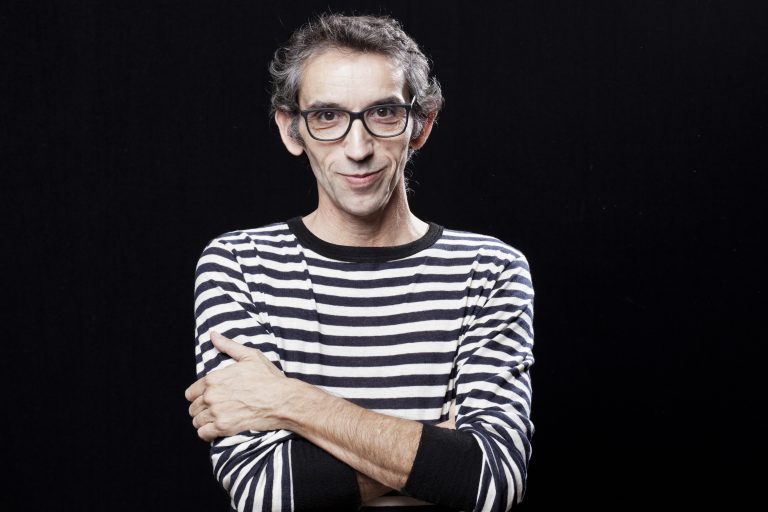 “Dealing With Comedy Is Much More Difficult Than Dealing With Drama”: Gipi Reflects on My Badly Drawn Life