Thanks to Uncivilized Books & Greg Hunter, we're pleased to share this excerpt from Hunter's upcoming book on cartoonist Dash Shaw, which we are running in conjunction with yesterday's conversation between the two. The essay excerpted comes from Hunter's chapter on the book Cosplayers. Uncivilized had this to say about New Realities:

Dash Shaw is one of the most restless cartoonists of recent decades, constantly evolving in how he approaches the comics page. In the years since his breakthrough graphic novel Bottomless Belly Button, he has continued to create acclaimed, idiosyncratic comics, varying his uses of line and color as well as shifting from domestic realism to sci-fi farce to historical fiction. But some concerns in Shaw's work remain constant. His characters live within their own personal realities, often failing to connect or even communicate. Comics as different as the dystopian spectacle BodyWorld and the geek-culture comedy Cosplayers become sites of clashes between incompatible mindsets--with Shaw adapting his cartooning to capture new varieties of confusion, alienation, and more. 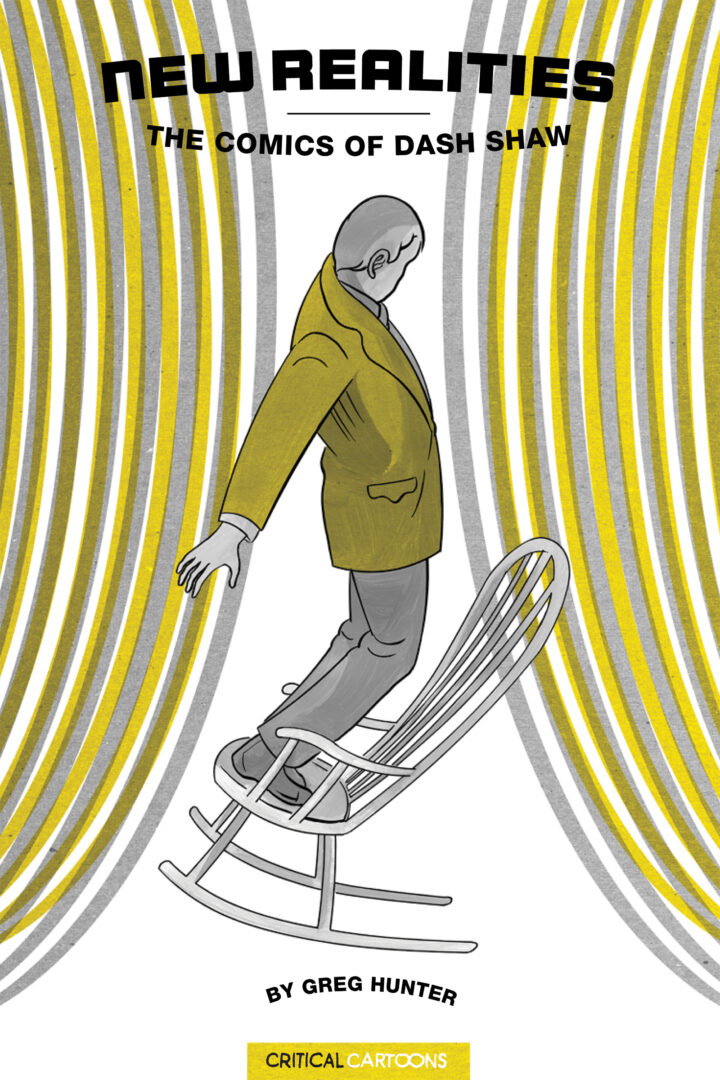 A costume is a fiction. It annexes the wearer to a different place, gives the wearer a different face, or both. The persuasiveness of these fictions varies, and most of the time, a person dons a costume not to make a convincing transformation but to celebrate its referent. Still, costume play is one of the most visible examples in contemporary culture of people layering one reality atop another. For Shaw, cosplay provides for a perfect pairing of artist and subject. Cosplayers—a series of short comics, collected as a graphic novel—features his most optimistic depiction of what happens when different subjectivities and sensibilities converge.

Annie, a cosplayer and aspiring actor, and Verti, a photographer and videographer, are united by their fandoms. Cosplayers introduces the pair as they bond in a hotel room during a convention. As Annie recites film trivia in a self-made Sailor Venus outfit, Verti resolves to become Annie’s official photographer. Both girls are taking a gap year before college, and Annie invites Verti to move into her parents’ South Carolina home so the girls can use the time to make videos. Verti agrees, but they quickly find the limitations of shooting in Annie’s small Southern town. “We don’t have a screenplay, or any other actors,” Annie says. Her solution: “I’ll do something in real life and you film it from far away. The other people don’t have to know I’m acting!”

The results, uploaded to the girls’ “Cosplay Films” YouTube channel, show Annie in increasingly elaborate scenes as the only conscious performer. One clip has her playing assassin on an OKCupid date, flashing a knife to Verti’s camera from inside her unwitting co-star’s house. In another, Annie and Verti confront surly patrons outside a bar, dressed as superheroes. The girls run away invigorated, having barely escaped real physical consequences for their costumed crime-fighting simulation.

Shaw uses a broad palette of soft tones throughout these scenes, returning to full-color comics after the limited-palette approaches of Doctors and New Jobs. And unlike the pages of Doctors, his compositions in Cosplayers includes traditional gutters. The choice contributes to an airier, less tense comic. His linework, meanwhile, is fairly consistent with that of Doctors—limited hatching and sturdy holding lines that are still much finer than those of New School.

The combined effect of these choices is one of Shaw’s most conventional-looking works, as if he were observing as many orthodoxies of the form as possible after a series of wilder projects. Lines are no longer notable for their heft, and color is more naturalistic. Shaw reserves a mixed-media approach for standalone portraits of cosplayers, e.g. using scraps of comics behind an out-of-shape Cyclops and Phoenix or magazine clippings to encircle a Gambit with glasses. This is not to say Shaw’s visual decisions are altogether less evident in Cosplayers. For example, Cosplayers doesn’t attempt to conceal various digital effects.

Sometimes this involves playful tugs at the integrity of the story’s world. Sound effects and transitional captions often appear in Helvetica, a font that, while designed to be inconspicuous in most contexts, has become one of the world’s most identifiable forms of typography and immediately draws attention to itself on a comics page. Shaw’s digital coloring contributes to this push and pull. Although his use of color is less expressionistic in Cosplayers than in other works—grass is green, skies are blue, and an Elektra cosplayer’s combat dress is an on-brand red—he includes conspicuous digital gradients throughout his pages. These effects are rarely the focus of a page, but (as with gradients in Doctors) the subtle transition from one tone to another consistently reinforces one of the story’s main concerns: the sometimes blurry line between one reality and another.

Following the faux superhero bar fight, getting more footage for Cosplay Films remains fraught. After Verti meets a guy while video-game shopping, Annie suggests the two of them go on a date while she films it. The use of gradients in these sequences is one of Cosplayers’ most noticeable. Outside the Olive Garden where Verti and her suitor reconnect, the neon yellows of streetlights seep into the purple tones Shaw uses to convey the nighttime setting. If this is not an overt metaphor for the dynamic inside the restaurant, it’s at least a reverberation of the scene’s central tension: as Verti and the man get to know each other, she’s projecting both her own reality and that of a character. (Alternately, it may indeed be an overt metaphor, with the complementary colors preceding a confirmation of the pair’s compatibility.) In the story she tells him, she mixes truth and fiction, conscious at all times that Annie is one table away, filming the date on a smartphone. This tangle leads to some of Shaw’s most emotionally direct pages, as Verti begins to realize her genuine feelings for the man. Eventually, she admits her early lies, during a scene in which the purple nighttime tones no longer have to accommodate the creep of other colors.

In “Tezukon,” the second segment of Cosplayers, the number of realities on a given page multiplies. Verti and Annie attend a manga convention, surrounded by fellow cosplayers. Throughout this section, Shaw seems to revel in the distances between cosplayers and their referents (Ash from Pokémon, with a stuffed Pikachu) and between the different fictions represented (Batman and Astro Boy side by side at urinals). This section also finds Shaw at his most explicit in addressing one of the major concerns of his work.

“Tezukon” introduces A.J. and Dave, two convention attendees who follow Annie online. They meet Annie and Verti at the show and manage to wrangle a group dinner, but the encounter soon reveals two painfully different views of the same situation. After the convention announces the winners of its cosplay competition, Annie—who, as Princess Mononoke, failed to place—stews on her hotel bed. Dave—who, along with Verti and A.J., has followed Annie back to the room—attempts to hold her hand. Annie recoils, puts her mask on, and urges the guys to leave.

The scene’s cringe comedy gives way to observations from the slightly more self-aware A.J. “You’ve, like, projected a whole personality onto her,” he tells Dave, and then, quoting a Neon Genesis Evangelion tie-in film, offers what could be a thesis statement for Shaw’s work: “You can’t bridge the gap between your own reality and the reality of others.” 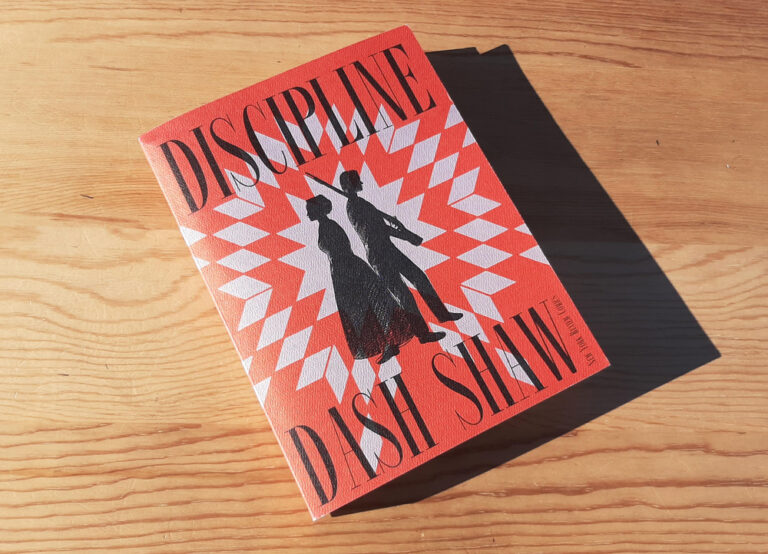 Speaking Out of the Silence: A Conversation with Dash Shaw about Discipline 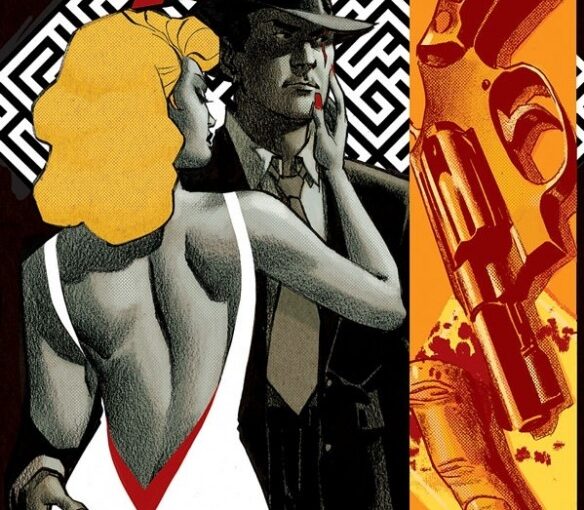