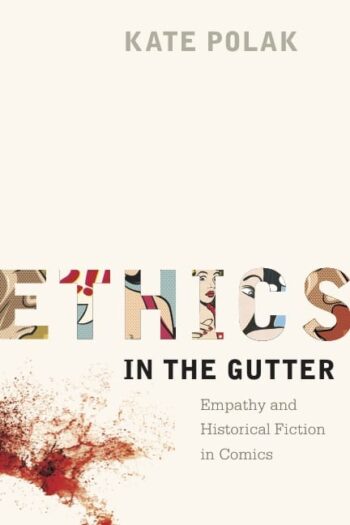 The following portion of Kate Polak's Ethics In The Gutter: Empathy and Historical Fiction in Comics appears courtesy of the author and of the publisher, Ohio State University Press.

The “Third Worlds” story arc departs from traditional Hellblazer fare as it follows Constantine travelling through Juliema, a fictional location in South America, to Iran, a location reputed to be the physical space nearest to the Garden of Eden. When he finally goes to Tasmania, where “The Pit” takes place, Constantine is in search of information about the Shadow Dog, a being said to hearken the coming of the apocalypse, which has apparently been moving through the veils between worlds. Up to this point in the larger story arc, he has not been able to gather much information about this creature, but during his attempts, several of his magician friends have been destroyed.

“The Pit” opens with a panel depicting several British soldiers standing atop a trench, text boxes overlays explaining that “Every night they dig the pit. They dig it for the first time. Its sides almost vertical. Stakes just below the edge, pointing down, to stop anyone from climbing out” (121). This first panel already gestures towards what is ventured in the plot: the conflation of temporalities and the crucial dimension of point-of-view. In terms of temporality, while this is a fictionalized account of a past event, it is recounted by a nameless, third-person narrator in the present progressive tense, indicating a continuous action. The narrator aligns herself with neither the soldiers nor the Aborigines, referring to both as “they,” while the reader views the ditch from inside, looking upwards towards the men standing at the top edge, already ensconced within the potential victim’s perspective. The second and third panels show the Tasmanian Aborigines being forced down into the pit from holding pens, the narration shifting in focus between panels. The second panel shows the Aborigines from the perspective of the British soldiers, the point-of-view including their shadows as they look down into the holding pens, the external focalizer remarking that “they say to the prisoners ‘move quickly, jena, jena. We’re taking you to a new place’” (121), while the third panel depicts the Aborigines being forced down into the pit. The narrator tells us that “They don’t want to go down that steep slope. But there’s a wall of men with guns” (121). The shifting point-of-view in the first three panels coupled with the externally focalized narration destabilize the reader’s identification with characters at the outset. Rather than offering an individual’s perspective of the massacre that is represented, the images are framed by a textual recounting. The pictorial element serves to illustrate the textual, but simultaneously, through perspective, offers brief windows into a variety points-of-view. 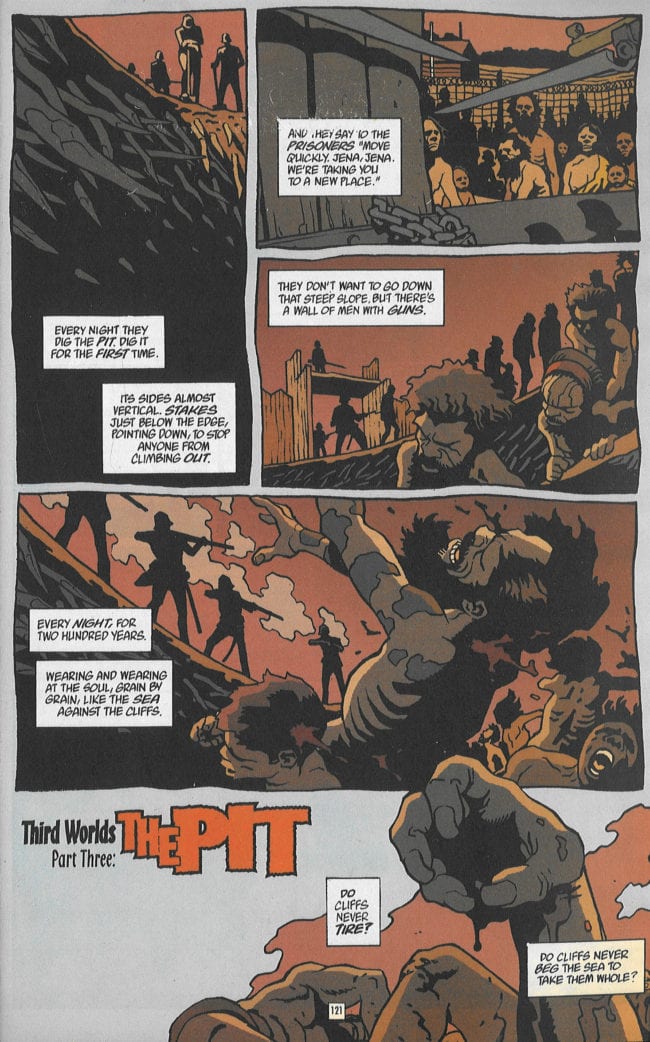 The final two panels on the page emphasize this instability as the reader is shown the pit from the point-of-view of an Aborigine during the massacre, coupled with an ambivalent narrative that asserts “Every night, for two hundred years. Wearing and wearing at the soul, grain by grain, like sea against the cliffs. Do cliffs never tire? Do cliffs never beg the sea to take them whole?” (121). The melodramatic tone of the questions satirizes the circumstance, in which the large group is slaughtered, ostensibly “taken whole.” The rhetorical questions posed do not directly map onto the Aborigines, but rather onto the soldiers, who are acting within the first panel, and recall clichéd constructions of extreme experience, but rather than explicitly linking that with the bloodied corpses of Aborigines depicted in the final panels, the narrator is instead remarking on how “wearying” it is for the soldiers to repeatedly enact the massacre. The first and second panels both refer to the actions of the soldiers, while the third refers primarily to the resistance of the Aborigines, and the activity of the soldiers. In using a slightly indeterminate pronoun, the narrator is mocking the effacement of the gulf between the experiences of the perpetrators and the experiences of the victims. The ambivalence of the metaphorical references in the questions stubbornly resists the reader’s desire to take an ethical stance in relation to the obvious massacre that is depicted, as the victims’ narratives are entirely erased in this, and the narrator instead expressed a parody of sympathy for the perpetrators. At the outset, Carey and Frusin work against a stable readerly position. While the images appear to merely depict what is related in the textual, instead, the textual operates to complicate to focus of empathy. The reader is offered the point-of-view of both the soldiers and of the Aborigines, and the violence experienced by the Aborigines naturally functions to promote sympathy and horror in the reader. However, the referent in the series of metaphorical questions seems to be both groups, implying that perpetrating violence wears on the soul in a similar way as experiencing violence as a victim.

Positing this equivalency at the outset complicates the ethical position of the reader because the page communicates likely the only information that the reader has about the genocide of the Tasmanian Aborigines, and this information is already obscured by the sympathetic referents, as well as the temporal location. The digging of the pit and the experience of the massacre take place “every night,” but it is not a new pit that is dug, or a new group that is slain: the same pit is dug “for the first time” every night. Notably, the narratorial voice that opened the comic disappears immediately after the first page. The textual component of the rest of the comic takes place either in dialogue bubbles or in text box narration that is directly attributable to a character presented in the comic, but the initial narratorial voice is clearly distinct from the voices of the characters. First, it indicates proximity through its knowledge of both the actions of the perpetrators and the feelings of the victims, which would suggest an omniscient narrator not present elsewhere in “Third Worlds.” In fact, the only time that this disembodied voice returns is on the penultimate page, which will be explored later. 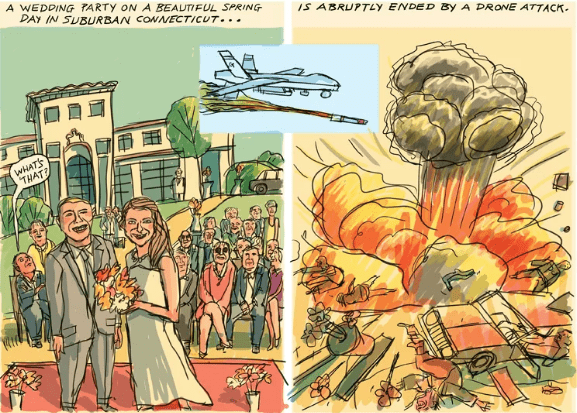