After I saw The Phantom Menace, I remember thinking, “George Lucas has all the money he needs to make a great movie, and yet the dialogue is so bad . . . How can this be? Does he not recognize that it’s an endless series of clichés? Why not hire a script doctor to make it less formulaic?” A few days later, I had an epiphany, one so obvious that it should have occurred while I was suffering through the movie. It was me, not Lucas, who didn’t get it. The dialogue is (mind-numbingly) predictable because that’s exactly how he wants it. He believes there’s only one way to infuse art with universal appeal: by using lines, sentiments, plots that we’ve heard, felt, seen thousands of time. The road to Depth never leaves Shallowness. Universality means repeating formulas that have been exploited ad nauseam.

I had forgotten the valuable lesson The Phantom Menace offered, a lesson that might have helped me to understand Justice League #1 as I was reading it. This comic is the first shot in DC’s war to revive their “universe” of comics via (another) “let’s start all over” approach merged with a new digital book-release strategy. It’s supposed to be the biggest comics event in years.

I’m tempted to say this is the worst comic I have ever read, but that title would give it a singular status, which might mislead my reader into thinking, “If it’s that bad, maybe I should check it out.” You should not. I would simply say that this is as bland, dull, and uninspired as a comic could be—I have read hundreds of comics as bland as this in precisely all the same bland ways. JL #1 is the textbook “non-event.” (For DC comics I like, see here , here, and here).

COVER-UP
The cover announces that the comic cares little about the story (such as it is), but a lot about the aura associated with “iconic” characters celebrated for their moral and martial striving—upward and onward! 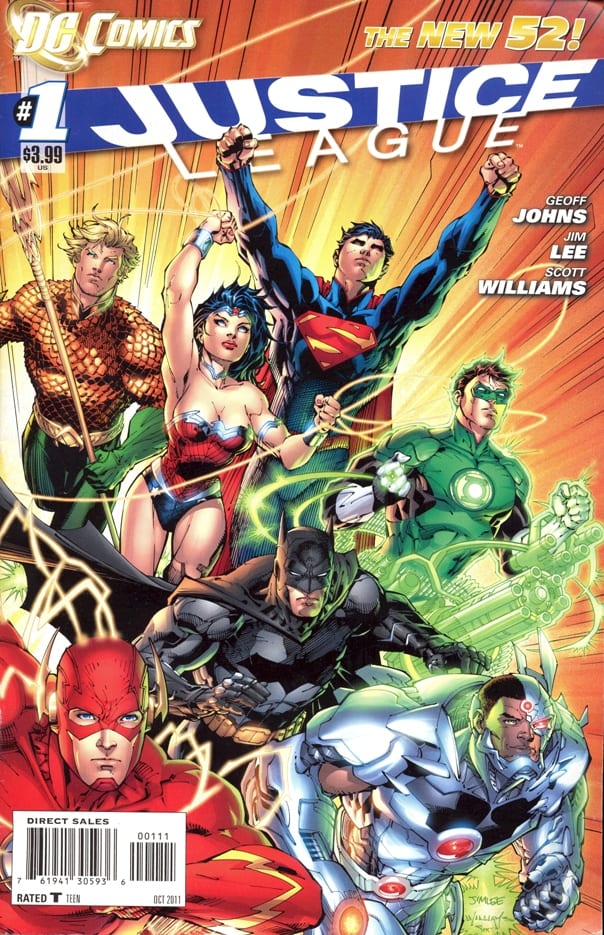 Given that Batman and Green Lantern act like assholes in the comic, why not have a cover on which they act like assholes, instead of the generic “portrait” image that dominates and suffocates the new comics rack each Wednesday?

A key to understating this choice—and every other aspect of this comic—helpfully appears on the cover: “RATED T TEEN.” 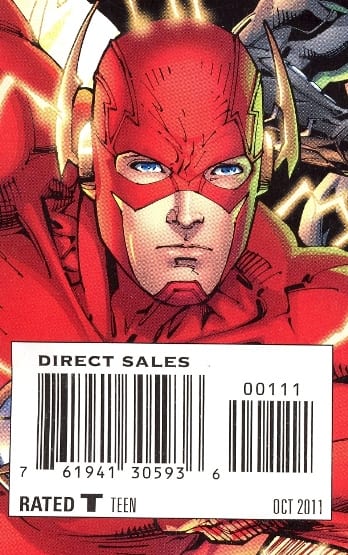 Regardless of the demographic that actually makes up their readership, DC insists on comics appropriate for teens, and perhaps even tweens and younger. In the corporate mind, “product” must be pasteurized to ensure safety for kid consumers (and to guarantee that it won’t anger parents - if they happen to read it). If DC’s editors would skim a collection of children’s fairy tales or even a Young Adult book like Gossip Girl, they’d realize that teen doesn’t have to mean safe—there’s more psychological violence, profanity, sex, and bodily fluids in the typical Gossip Girl volume than in a dozen Vertigo comics, DC’s ostensible adult line.

One way to demonstrate that narrative matters more to you than, or at least as much as, your corporate property (i.e., characters) would be to design a cover that shows readers something interesting about your new commitments. This cover screams the opposite: “Meet the new DC universe, exactly the same as the old universe.” Flash, Aquaman, and Wonder Woman fail to appear inside, unless you count ads for their forthcoming #1s. Speaking of (less-than)-wonderful women, the only woman/girl in the comic is a long-legged cheerleader who waves her pom-poms at Green Lantern’s plane, 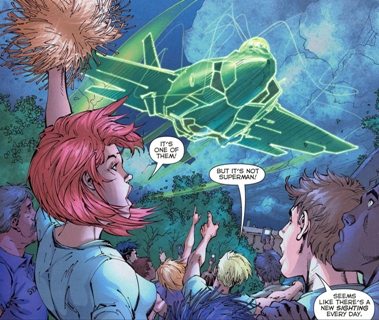 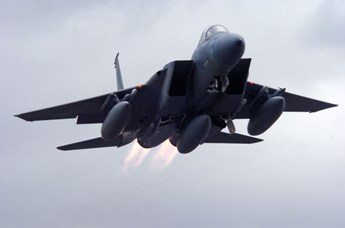 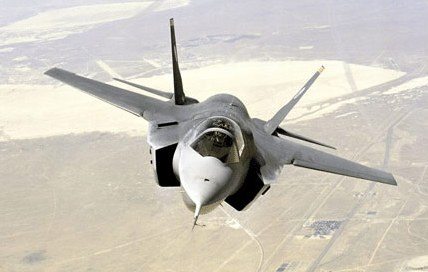 Green Lantern travels the cosmos - couldn’t he use his ring power to create that really cool-looking alien interstellar travel device that he saw in Quadrant Zoltrom or wherever? They’re not the Justice League of America anymore, so let’s get a little more inventive . . .  Or are these comics still about AMERICAN MILITARY SUPERIORITY?

This is an unfortunate beginning. Every Marvel and DC company-wide "event," it seems, must announce itself as a Serious Look at Heroism. Is this the only way to make a comic profound? JL #1, we are told from the git go, explores the very nature of heroism itself. 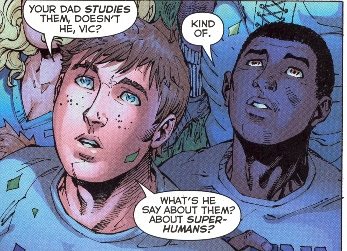 What’s also odd about this reboot is that, even more than establish an entry point for new readers, it reboots the minds of the characters. The heroes have never met each other, making for revelations that seem crucial to them, but trite to me:

Yes, I know Batman has no superpowers and that’s what makes him different . . .

JERK V. JERK
Two clichés of the genre: 1) Men fighting men with fists. 2) Men fighting men with words. When they battle with language, they often resort to issues of humiliation and masculinity: each one says (indirectly—it’s a TEEN comic, after all) that the other is a pussy, sissy, has a “small weapon,” etc—and so insults his literal and figurative manhood.

Despite the massive objects Green Lantern makes with his powers, for example, Batman refers to his “flashlight” – cause it’s small, like his "tool." The entire first half of the comic is male/male competition dramatized in the most expected way: Batman as the stoic and morally correct father and Green Lantern as the brash upstart. Not much more to it than that. 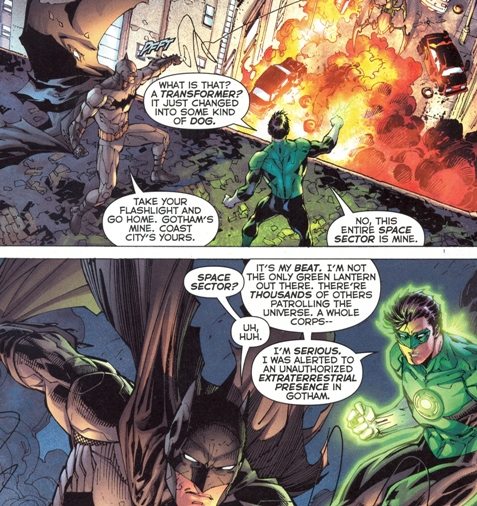 It’s all about size, territory, and mastery with these superboys, isn’t it? “You have a little town, but I have an entire fucking sector of the galaxy, you piece of bat shit!” 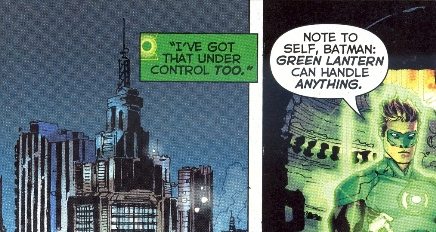 Masculinity and mastery. He can handle anything, a regular NO LIMIT soldier.

I have no problem with male-dominated adventure stories; I just want something better than this, something in which dudes are not so dull.

A few pages in I said to myself, “OK, given that there’s all of these over-the-top explosions, macho dialogue, etc. pretty soon the writer must take it down a notch to the personal level, introducing a story about a non-powered person or a hero’s alter ego.” I was proud of myself when this happened (had I learned my Star Wars lesson, I wouldn’t have been).

So after pages of superhuman antics, we now are among humans like us, who deal with matters of family and the heart . . . And again, it’s about an older male and a young male who don’t get along: a father and son. The only ‘idea’ on display in the comic is heroism in the context of dude v. dude competition. (The son is one of the heroes on the cover.)

HUSTLE, HIT, NEVER QUIT - But what if, after you hustle and hit, you get one of those nasty life-ruining head injuries that many football players suffer. Then can you quit?

SO MUCH CLUTTER
I’ll blame myself for this problem, but only partially. Perhaps because I was raised on pre-’90s comics, the panels in JL #1 are difficult to understand. They use so many lines that I have trouble seeing distinctions between objects, and between objects and effects. I really need to slow down and look with more care than an action/adventure comic would likely want me to use. . .  To be honest, I don’t really think it’s my fault. JL #1’ is kind of a visual mess. There’s way too much of this: 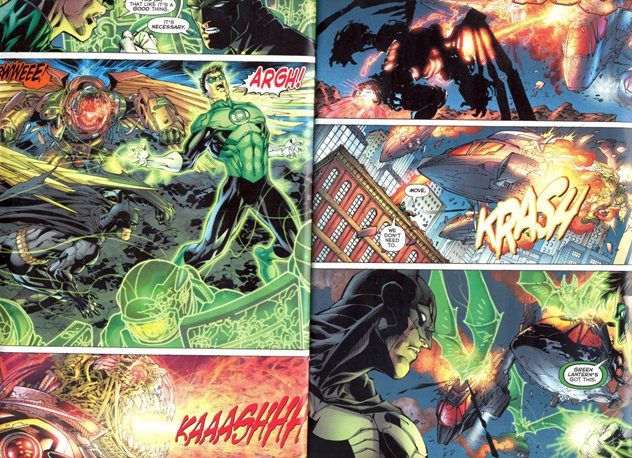 When a special effect becomes the norm, it’s no longer special – or effective.

I could easily imagine this kind of density working in an animated medium where it’s easy to suggest depth and separate foreground from background. But in these drawing, so many things merge together. I feel like I’m looking at some kind of generalized, colorized effect, not specific objects organized in space; nearly every image (it seems) is either an actual explosion or is supposed to evoke the “feel” of one.

LINE after LINE
I don’t really understand some of Jim Lee’s art. I recognize the considerable craft on display (and really like his Gotham scenes) but I often can’t tell if a line on a character’s face is shadow, dirt, a facial feature, a manga-esque emotion index, an injury from one of the non-stop battles . . . 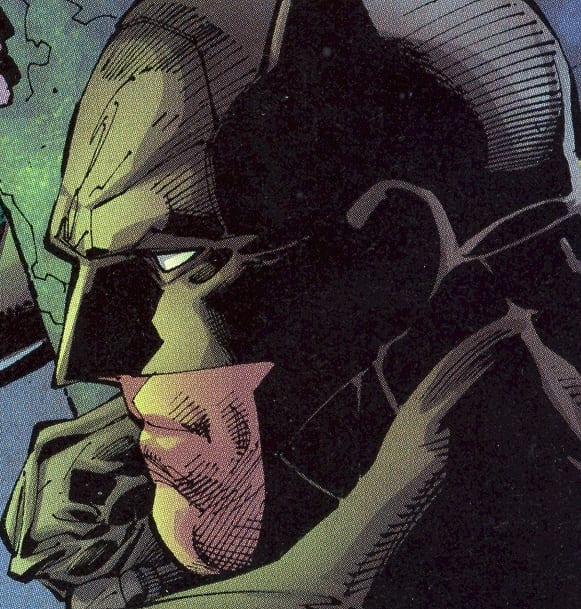 Some other Batman faces from a shoe ad in the same issue: 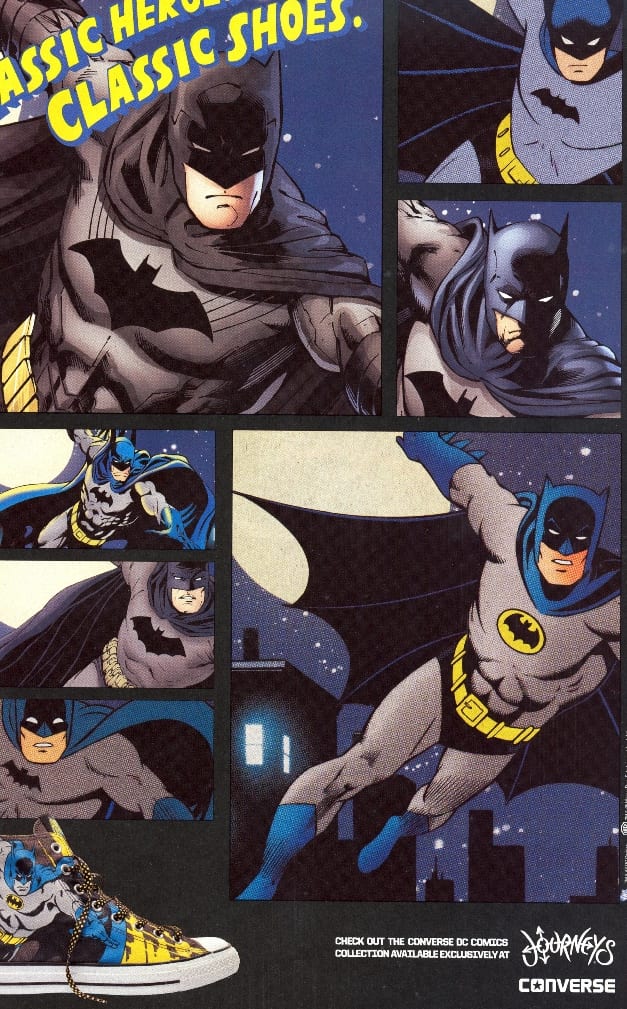 “Listen, Pops,” a young fan might yell at me, “it’s about the intensity. All those lines are awesome, like the graphics in Infinite War: The Final Reckoning!” Fair enough, I guess. I don't play many video games.

THE MYSTERY OF IT ALL
It might be that I haven’t learned any lessons from my encounter with The Phantom Menace. JL#1 still baffles me. Could it really be as bland as I think it is? Could it be that the creators achieved exactly what they wanted? Am I missing something: are the references to Lexcorp and Darksied key in some way?

For me, superhero comics can’t be good when they’re burdened by a need to be an earth-shattering event, taking us back to DAY ONE and starting all over again. Every aspect of this comic works toward attaining the same register: High Intensity. It has little sense of verbal or visual rhythm—there’s no flow and no mystery.

And it has little plot to speak of, other than heroes fighting aliens and bickering. Much of this “plot” revolves around the big reveal of Superman on the last page, a moment Batman and Green Lantern have been anticipating . . . and fearing. When he appears, it’s a major deal for them. But not for me, and I doubt for most readers.

This is a problem. The story may be compelling for the characters living it out, but as a reader who knows exactly where it’s going—having seen hundreds of comics take this worn path—it’s not an event, but a drag.

It’d be like thinking you’re writing a “mysterious stranger” narrative, but you show him on the book's cover, name him early on, and talk about him a few times, and make him a character that literally every reader knows: America’s most recognizable icon, the Man of Steel.

I remember reading comics back in the day in which a mysterious character, often a villain, would frequently appear in a story’s last panel. “Holy shit,” I’d said, “Who the hell is this? A green and purple Metal Monster Bug Villain named Annihilus! His name means it’s very, very likely that he will annihilate someone!” 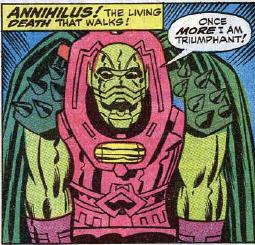 There’s at least some mystery as you wait a month to figure out who he is and what havoc he’ll wreak. Green Lantern and Batman may anxiously await Justice League #2 . . . me, not so much. Same as it ever was. 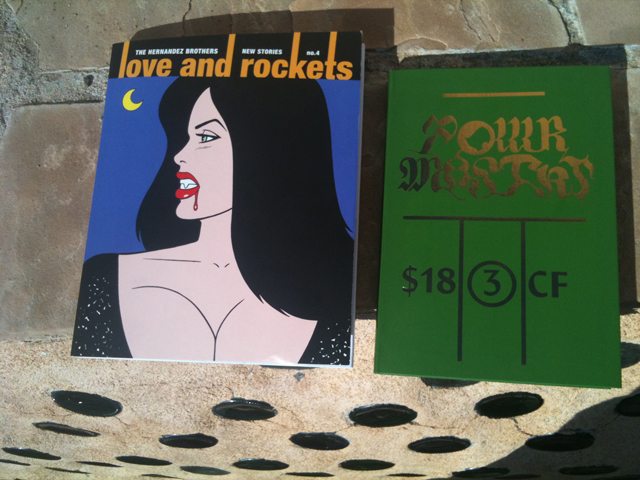 The Days Are Packed