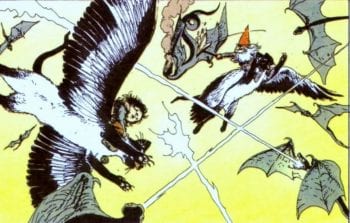 For a while now I’ve had the idea that something unusual happened in American comics between 1985 and 1987. The period was marked by a unique set of circumstances that encouraged a new level of seriousness about comics as an art form. Comics from this short timespan are something else. The direct market was booming. Marvel and DC were joined by a legion of smaller publishers which released comics in a dizzying array of genres and art styles. Foreign comics became much more available through European graphic novels, and they were joined by some of the first instances of serialized manga, leading to an exuberant experimentation and cross pollination. Beyond the now classic (and thoroughly analyzed) Watchmen or Dark Knight Returns, many of the comics from this period are marked by thematic and formal ambition. The roots of this moment stretch back to the late '70s and early '80s but it seems to reach apotheosis precisely during this short span. Something happened in comics between 1985 and 1987. Let’s call that something the Event. The Event influenced comics for decades… and I missed it. I missed it all. I missed the Event.

Because I wasn’t there. 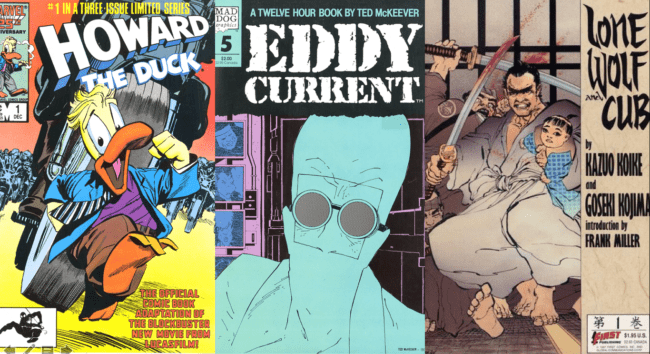 In 1985 I was still living in Communist Poland. Poland was a country with its own strong comics traditions, but it was provincial when it came to access to world’s comics. To live behind the ‘Iron Curtain’ was to be cut off from the developments in the rest of the comics world. I was unaware of the Event. Most of the comics I grew up on and read were either homegrown (Tytus, Romek i Atomek, Kajko i Kokosz, Funky Koval) or they were drawn by a Polish cartoonist who had found success abroad: Rosinski’s Thorgal. Through an English-language library I was able to acquire British paperback editions of Peanuts, and a single paperback-formatted copy of a Marvel comic. To this day I have no idea which comic it was. It definitely featured the Fantastic Four and Spider-Man. I think it was drawn by Kirby, but that could be retroactive wishful thinking. My very limited English forced me to make up a story that was probably far superior to the one in the book. In any case, it was a bright, garish, and alluring glimpse of a universe populated by beings with weird powers. I read it until it fell apart. Is this is how cargo cults1 begin? I became an acolyte: I worshipped a comic from another world. It was my first inkling of a larger world of comics, one that extended beyond the borders of my native country.

In late 1985, my family left Poland for greener pastures in the West. Temporarily settled in West Germany while we were processed for emigration to the US, my comics world opened up a little more. My comics world opened up a little more. I was naturally drawn to Marvel comics. The small taste of that Universe had left me wanting more. Translations of Marvel comics were coming out real time. The Fantastic Four were joined by the X-Men, Spider-Man, and Conan the Barbarian. They were just hints of a vast, inexhaustible—but also distant and filtered through another unfamiliar language—comics utopia. Imagine that comics-crazy kid, in November 1987, arriving in Minnesota, primed, hungry, ready to gorge on American comics.

As soon as I arrived in America I set out to acquire as many comics as I could. I mowed lawns, begged parents for money, sold poster-drawing-services and test answers to classmates in high school — anything to be able to purchase next months comics. I continued to read the Marvel comics I was already familiar with from Europe. It turned out the comics I was reading in West Germany were a few years behind. Reading the current American comics produced a gap; a hole in continuity. I had missed out on years of stories. I needed to catch up. At that time Marvel (or any other publisher) did not routinely publish collections of older comics. To read older material one had to engage that peculiar comics past time: the acquisition of back issues. Until this point I’d been finding my comics on newsstands like 7-Eleven, but the hunt for older comics led to my discovery of comic book stores. 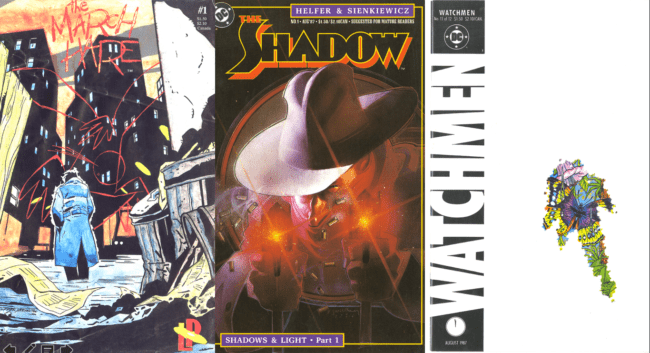 Once I entered a comic book store, the experience was mind-blowing. I became aware of so much more than Marvel: Epic, DC, then independent publishers like Eclipse, First Comics, or Dark Horse, and later Fantagraphics. While trying to fill the gaps (and the gaps expanded exponentially) in my Marvel and DC collections, I’d stumble on mysterious and iconic ads for Watchmen, The Dark Knight Returns, or The Shadow. These titles didn’t fit the standard continuity. They were routinely mentioned with reverence in letters pages, and in various publications about comics. It become apparent that I missed much more than bits of superhero continuity; I missed the Event.

Since there was no internet to answer all my burning questions (or provide free scans of old comics), I had to hunt down the actual issues—some of which became scarce, or expensive collectors items beyond the reach of a poor immigrant kid like me. For over a decade I had a single issue of Watchmen. I didn’t dare to read it until I hunted down the whole series. The Dark Knight Returns was out of my price range. Mister X only existed as an ad in Yummy Fur. Imagining what these comics could be like had a charge similar to that first time I stumbled on a Marvel comic back in Poland. I knew I was in the presence of something special. They held promise of so much more. They were emanations from the Event, tantalizingly palpable yet distant and difficult to grasp.

After a couple of decades of comics archaeology, after digging through countless back issue boxes, it slowly became apparent that something happened in comics between 1985-1987. Routinely, when I noticed something new, interesting, or unusual in a new bargain bin find, it dated to the Event. In the so called mainstream, formal experimentation reached an all time high. I already mentioned Watchmen and The Dark Knight Returns, but works like Daredevil and Electra: Assassin, to name a couple, were all high watermarks at the time, and their influence long-lasting. The indie mainstream (for lack of a better term) was booming with Grendel, Miracleman, Teenage Mutant Ninja Turtles, or Eddy Current. Another side of indie appeared with Yummy Fur, Lloyd Llewellyn, Neat Stuff, and the already long running Love & Rockets really hit its stride. Meanwhile anthologies like Weirdo or RAW achieved new highs during this time as well. Even though they both would cease publication during this period (or shortly after) they’d soon be reborn in new contexts (digest RAW, or Maus GN) and their contributors gained greater cultural significance (Crumb). Elsewhere in the world, Moebius was putting the finishing touches on The Incal, Muñoz & Sampayo were working on Alack Sinner, both would prove hugely influential in America. This is also the time Manga reached American readers for the first time with titles like Golgo 13 and Lone Wolf & Cub. All this is just the tip of the proverbial iceberg. The comics from the Event would define the medium for decades.

In this ongoing column I intend to extensively explore comics from the Event. I will be writing about the acknowledged classics, but I’d also like to shine a light on the less well known comics that were published during that time: from obscure independent titles, to the regular monthly series from the major publishers. The Event affected them all. Occasionally we may need to explore comics that fall outside of this three-year time frame, especially if they help illuminate the Event. I hope you join me on this journey.

* A cargo cult is a millenarian movement (religious or secular, first described in Melanesia) which encompasses a range of practices and occurs in the wake of contact with more technologically advanced societies.↩

Tom K(aczynski) is an immigrant, cartoonist, writer, publisher, and teacher. His comics include the Eisner-nominated Beta Testing the Apocalypse (Fantagraphics) and the forthcoming Trans Terra. Tom K is the founder of Uncivilized Books (link: http://www.uncivilizedbooks.com/), a boutique publishing house. Since its inception, Uncivilized Books has published acclaimed comics by Gabrielle Bell, David B., Joann Sfar, Kickliy, Sam Alden, Sophie Yanow, and many others. His writing has appeared in the Rain Taxi Book Review, among many other publications. He also teaches comics at Minneapolis College of Art & Design and the University of Minnesota. He lives in Minneapolis with his partner Nikki, two cats, and a dog. English is his third language. 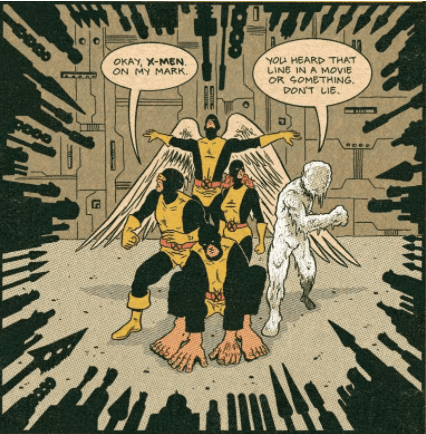 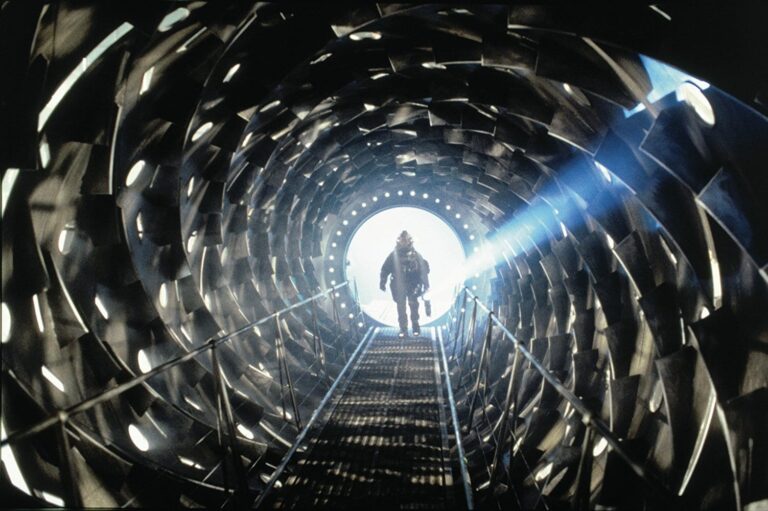