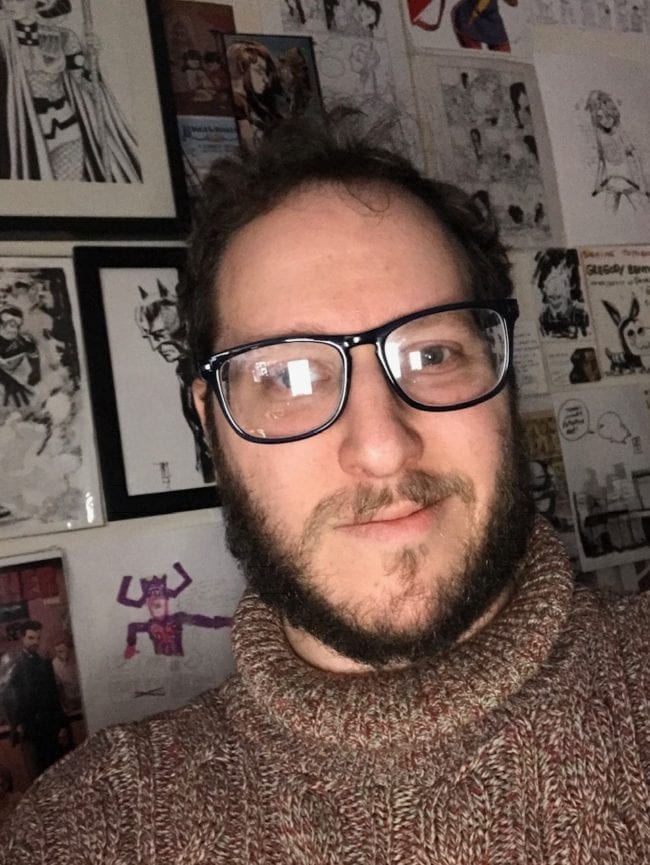 Opened in 2013, Escape Pod Comics is a shop founded on the principle that the medium of comics can and does produce works of every type for all readers. Located in the cultural capital of Long Island, Huntington, the store provides the widest range of comic material in the area (some say all of the NY Metro Area, but they’re crazy).

Featuring a dedicated Kids Room, $1 Back Issues, and a Subscription Service Escape Pod caters to as wide a range of readers as it can while also cultivating stock that helps readers expand their interests beyond what they are currently aware of. Escape Pod hosts author events with creators from all corners of the comic world and actively promotes the work of anyone who can use the medium well both in store and on it’s various social media platforms.

Owner Menachem Luchins opened the shop after burning out as a High School English teacher based on the principles and models of two shops he loved: Rocketship Comics in Brooklyn, NY which he was a customer at until it closed in 2010 and Page 45 in Nottingham England, the finest comic shop in the world.

About 6 years- I was a burnt out High School teacher who loves the medium and about seven years ago, Golden Apple Comics was up for sale so I crunched the numbers and really thought about moving my whole life to California and buying the place, but I realized it was much cheaper to just open my own place and that I wouldn’t be beholden to keeping up an existing shops customer base and practices. 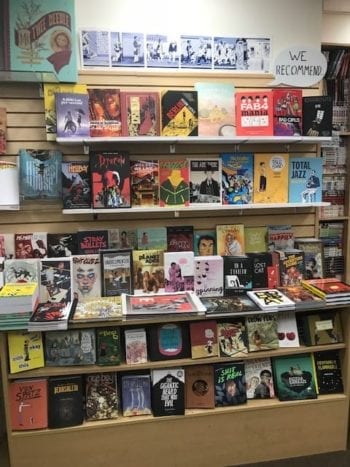 I’ve been interested in comic retail for this long but really only spent about half of these last ten years behind the counter... but I would say that the biggest change is people realizing what OUR shop is about, getting that we’re a store not meant to sell super-hero knick-knacks and collectibles but one to find the wide range of books, new and old, that the medium offers.

In a more general sense, which I assume is how the question was meant, it’s the YA market: Graphix, Scholastic Book’s comic imprint, is just about 11 years old and they have definitively shaped the biggest movements in comics over the last years, in countless ways.

It’s a really long and arduous process that involves myself and my manager, Conrad Roth, basically always living and breathing comics- we don’t cater to any one kind of crowd, so we’re always on the look-out for books for all sorts of audiences: Will our people who like Moebius dig this, will all the people who got Lady Killer want Catwoman, etc etc. It’s not a process as much as a lifestyle at this point.

As I said above, Conrad and I are always on the look-out. That means we read PDFs publishers and self-publishers send us, read through Previews from Diamond each month and keep up with social media posts by creators, publishers and “comic news” outlets daily.

To me, Comic News is a dirty word: it’s sites (that I won’t name) that have the word comic in them but really just feed off clicks and coverage of numerous non-comic things. As far as I am concerned, they can all disappear. 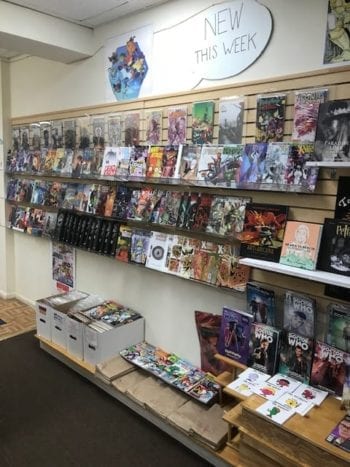 My routine is to be here, barring emergencies or major events, Sunday-Friday (we are closed for the Sabbath, as I am an Orthodox Jew) for 8-10 hours. On Tuesday-Thursday Conrad is here as long or longer, handling the new books, doing stock intake and straightening the place up so it looks nicer than my ratcheted perception of “clean.”

All day every day I am dealing with paperwork, helping people find stuff, answering interview questions… The main point, for us, is that I or Conrad is always available to our customers online or in-store to help find them exactly the right book.

I think publishers know exactly what I want them to know- that a change is coming and the readership is shifting and growing in ways they can’t control or guess. That’s why the super-tights single issue markets is in so much trouble and desperate to sell as many books to their dwindling market as they can.

DC seems, at least, to see the emerging market with their new Ink and Zoom Lines but considering how reactionary most of their moves have been for the last few decades we shall see how long it lasts.

Quite frankly, single issues are the biggest detriment to people’s entrée into comics and these companies, from Marvel to Boundless, know it- they just don’t really know what to do about it.

Why do you think of single issues as a detriment?

Single issues aren’t a detriment, but the way they are currently being published is almost anathema to creating new readers.

In just the 5 years I’ve been doing this we’ve seen Diamond’s top selling single issues each month fall below 100,000 copies sold. Barring any variant cover shenanigans it’s pretty much assumed that only the top 3 issues are going to sell that much, everything else, from the 4th or 5th best-seller and on, is selling less.

I can go on and on about HOW the publishers could revitalize it but I think we’re really passed the point of no return- you can probably boost those number slightly but you certainly can’t by shipping titles every two weeks or having multiple “important” event books every year… There is also the fact that the content at most of the major single issue companies is not conducive to getting casual readers- plots and events are very “all or nothing.” And in the day-and-age when EVERYTHING gets a trade paperback why should the average consumer deal with the hassle of a hold list or keeping track of the constant shifts in titles and creative teams?

Look at Spongebob Comics and Simpsons Comics, both folded up their monthly comics because of sales- and they’re just the most recent example. As I noted, DC is trying to spread out into the more “book-centric” YA market and I hope they have loads of success. 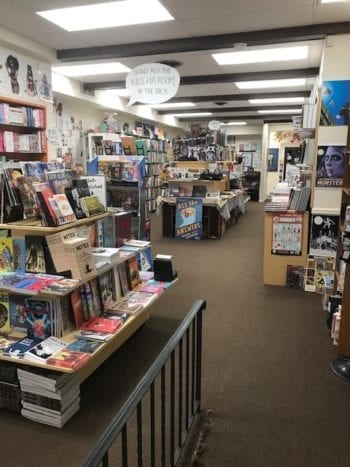 Come to the shop and I’ll tell you. This is a big mission statement of ours: to demystify the industry and our decisions as much as possible- I spent hours talking to customers about how we order our stuff and why. I am a big proponent of transparency and I try to do my best to deliver on it.

Comics? Nothing- I love comics, it’s an amazing medium that allows creators the ultimate freedom to tell all sorts of stories in ways unimaginable! It’s the most direct conduit of a creator's vision to reader’s mind currently available to us- how could I be annoyed at it?

The people who publish, read, and sell comics… that’s a whole other story.

Again, EVERYTHING. I’m thrilled to see the new generations of teens who are being raised on Sarah Scribbles, Tumblr fan art, Raina Telgemeier, and Amulet make new works as they discover themselves but really if they all choose not to, it'll also be cool- because there will always be awesome new creators making awesome new work!

This week, I’m excited for Liam Sharp and Grant Morrison’s Green Lantern. Sharp is an artist who  really excels at embellishing his pages and going all out and so it’s a great character for him and a great writer who will really help him to go all out.

The Wicked and Divine Funnies is a great example of what I said before about single issues- a wonderful book I and all our WicDiv fans are excited for, but not actually accessible to a new reader.

Meanwhile, the $9.99 Marvel Rising trade is something like 1/3 the price of buying all the issues the really fun and well done series contained, but which were all solicited as single issues with confusing titles.

We’ve also got the 13th Diary of a Wimpy Kid book coming as well as Brad Meltzer and Chirs Eliopoulos’s I Am Sonya Sotomayor which are both YA series that use comics in interesting, though different, ways. 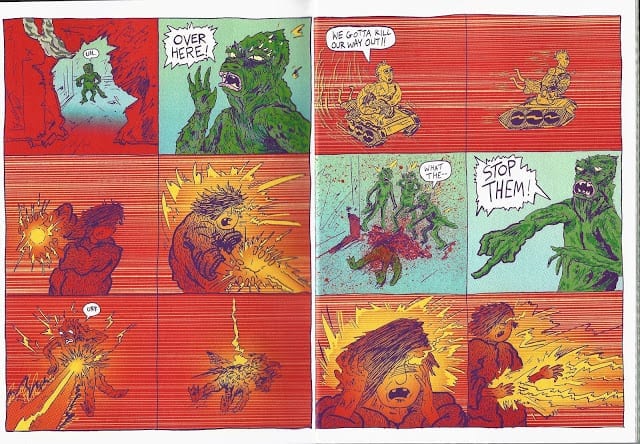 The Day Before the Hangover