Ed Piskor is a genius because he sees outside of our little comic book world and beyond to a bigger stage. He is someone whom I respect, in part, because we have similar backgrounds: hardscrabble Pittsburgh mill town life. What he has achieved by his late twenties is truly an inspiration to me. I asked Eddie to send me a report on what he was up to and how he was handling the release of Wizzywig from Top Shelf. 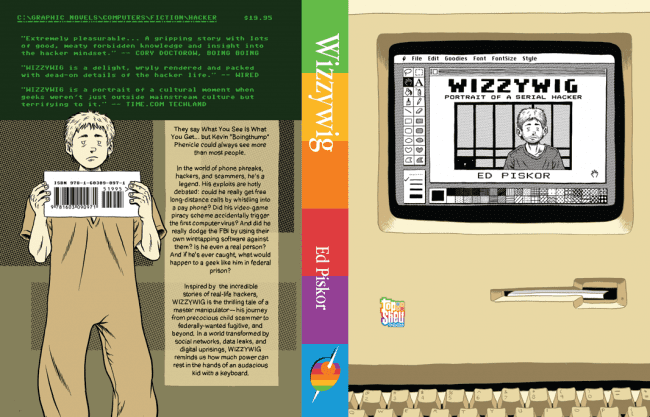 Ed: The book is finally a tangible object, but, it's already my past. It's weird how book publishing works. Wizzywig took me five years, off and on, to construct. The last half of my twenties was spent on it, and I delivered the final work to the publishers in January 2011, for a release date of July 2012. A year and a half has gone by, and now, I have to revisit this project, because it will be new to most people who come across it.

Comics is my first love, but I also have a million outside interests, and I use the medium of comics to allow myself to indulge in exploring these outside interests without apology and without feeling like I'm being a slacker. If a comic is generated after I obsessively decide to research hacking culture, or hip hop culture, then all the time spent away from the drawing board isn't a waste.

That's the spirit in which this Wizzywig project manifested itself. I spent fourteen months drawing a comic for Harvey Pekar, and I listened to one thousand hours of a radio archive about hacking that I discovered just before podcasting became a buzzword. Absorbing all of that info pointed me in other directions to continue my education in this underground scene. After a certain point I was pretty sure that I would be the only cartoonist able to handle a subject like this, solely because of my informational indoctrination. This seemed like reason enough to start drawing a comic.

I self-published chapters of Wizzywig, one a year, for three years, under the radar of most comics readers, but, very much in the presence of the technophile audience that inspired the work. Wired magazine did a feature on the comics. A bunch of popular, technology based blogs, podcasts, and websites highlighted the material. I forged the relationship I currently have with Boing Boing because of those crappy, vanity-printed copies of Wizzywig. I've sold thousands of them from my mom's basement, been a guest to many technology and hacker conferences to speak and sell books. I've met and hung out with almost every hacker who inspired the work, cultivating some really great friendships that I absolutely cherish. In between volumes I drew a comic called The Beats with Harvey Pekar. While working on Wizzywig I designed an entire ten-episode season of an Adult Swim show that aired in 2011. This project was there when I met I really cool girl, and 3.5 years later we broke up as I started chapter six of the book. When I sent the final work to Top Shelf in January 2011, I fell into a crazy postpartum depression, of sorts. I consider this my first book. The stuff I did with Harvey Pekar was art school.

I bring this all up, because, revisiting the book after all this time, I look at plenty of panels and remember exactly what was going on in my life when I drew them, what I was feeling, fun times and drama's that played out. It's been a long road, and is years old and certainly a significant part of my past. But, the work is new to everyone else. It's kind of fucking strange.
============= 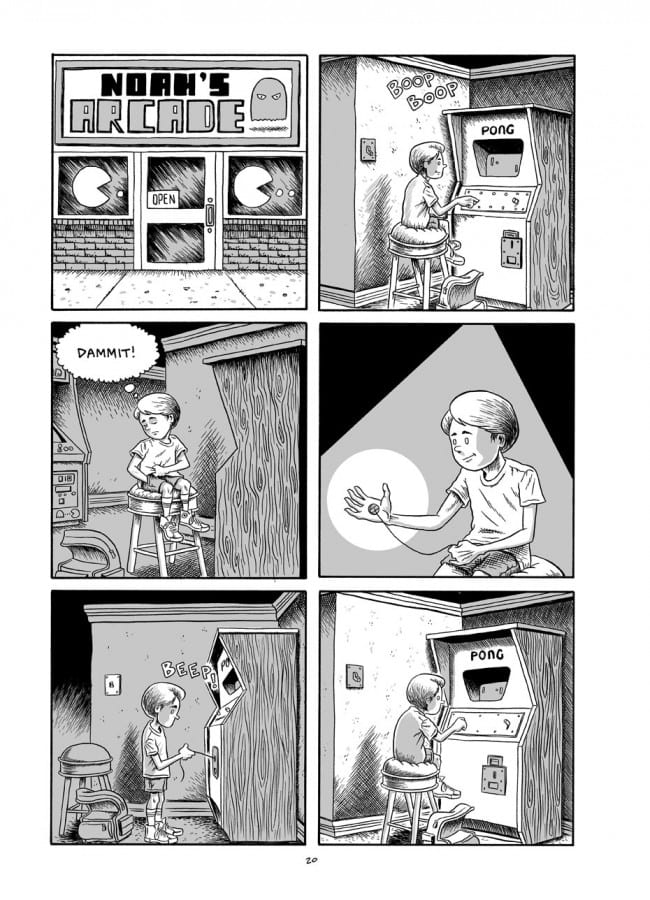 =============
Frank: Can you tell me a little bit more about doing Wizzywig yourself early on? I remember there were some zine versions that had the acronym W.Y.S.I.W.Y.G. as the title - you changed it to make more sense, I believe, right? What does Wizzywig stand for -for those who are too lazy to look it up?

Ed: When constructing the story early on, I wanted the format to be very malleable to a publishers needs. I don't really have the head for, or desire to, be a DIY self-publisher, so finding a home for the book was always a goal. The story can work with four-panel pages, six-panel pages, or twelve-panel pages, and those old minicomics, The WYSIWYG Technical Pamphlet, was my attempt to submit an eight-issue mini series to the various indy pubs. This was right before Diamond changed their practices, in effect making regular, 32-page, comic book distro a dicey proposition for the indy publishers.

Taking those mini's around, almost everyone couldn't pronounce the title, which I liked, but, another goal of mine was to actually get the book out there, so I decided to take the spelling phonetically to WIZZYWIG. W.Y.S.I.Y.G. is an acronym that stands for "what you see is what you get." It's an old computer term to basically describe the computer operating systems and desktop publishing capabilities that we now have, with windows, visuals, point and click functionality, etc. Though, you and I would take umbrage with this "WYSIWYG" nomenclature when it comes to pre- press computer production work for comics, because what is seen on screen is rarely the way it looks when printed.
============== 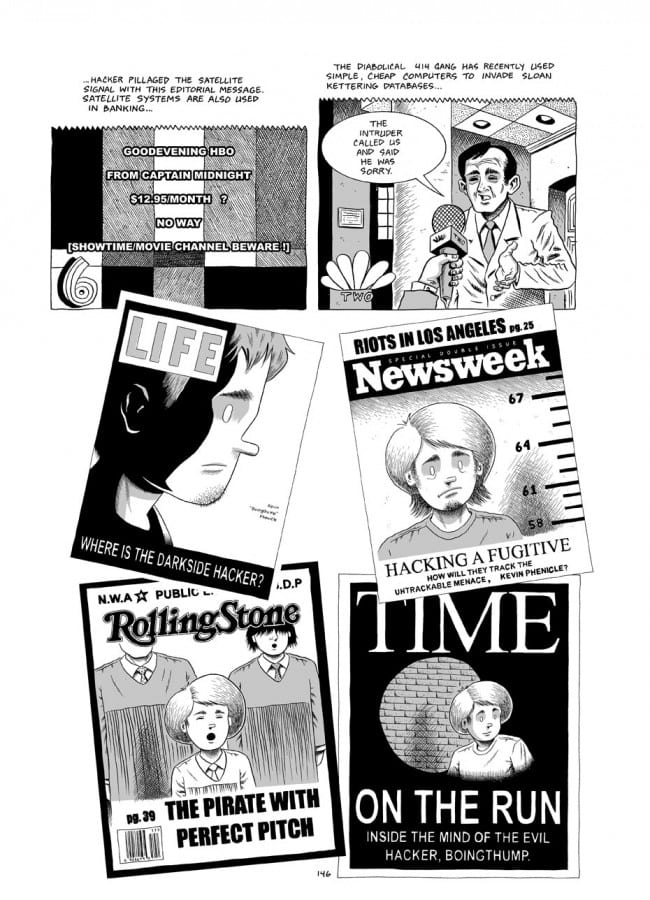 ==============
Frank: I remember when we got to know each other better a few years ago - you were really kicking ass on this project - but that it was before you came back from Heroes Con that one year and were really leaning towards starting a webcomic. Can you talk a little bit about how doing it the way you did it was different than doing stuff on the web or for the web like your hip-hop strips for Boing Boing?

Ed: Self-publishing the comics before doing the web comic was akin to walking a tightrope without a net. Who knew if there would be an audience? It was something that a 24-year-old could do without worrying about failure, and it's something that I'd be completely
paralyzed with fear to consider at age 29. 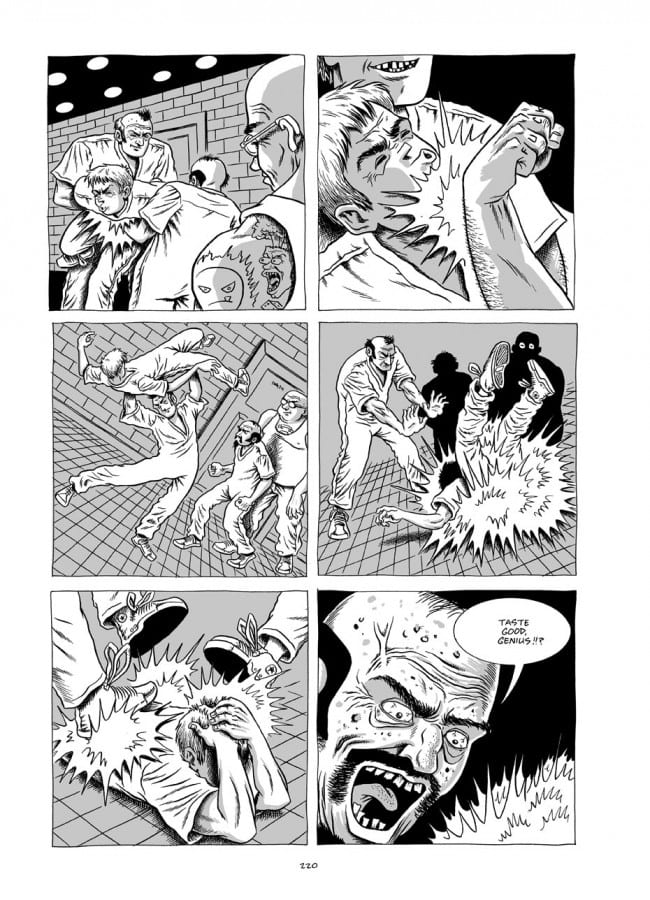 Ed: I still remember the boxes and boxes of 100 Wizzywig 100+ page books arriving, and thinking, "What the fuck do I do with all of these things? I don't have room for this crap!" I remember wanting to send the book to specific, highly respected people in the hacker culture, and in hacker fashion, locating their campaign contributions to find out where they lived so I could send a book. This lead to getting some hype here and there,and the audience was able to grow from that.

I did three volumes of Wizzywig before putting the comic on the web to finish (the last quarter of the story is brand new). The web version was reformatted, somewhat redrawn, and almost completely rewritten before I sat down to complete the project.

Setting the web presence up with the comics makes total sense to me now. I would only read something on a screen as a last resort, like when I grabbed a torrent of Miracle Man because there's no inexpensive way to experience the work any other way. There are more and more readers out there everyday who have no problem looking at the screen to get their fill, so I'm happy to present the work in whichever format a reader would like, but, the physical object is absolutely the end goal. Same goes for the Hip Hop Family Tree comic.

I also think of the online component as a first draft. With the hip-hop comic, I'm sort of employing the "Chris Ware" model on Jimmy Corrigan, where he'd do two pages a week for the Chicago paper, and then refine and collect the essential stuff into book form. I'm definitely not so egotistical to think that I can get the work as good as I want to, the first time I present it, and I like the rush of having a weekly deadline, so I'll continue to release these fairly loose versions on Boing Boing, and then will tighten the verbiage and art up, as needed, when the work sees print.

Frank: While we are on the subject of the Hip Hop Family Tree - is that your main focus these days? How did that project come about? And is it true that Chuck D put one of your strips up on his blog?

Ed: Yeah, I'm spending all of my time down a hip-hop rabbit hole. It's really fun to indulge in, and since a comic is being produced, then I can't be accused of being a slacker, which is something I'm always conscious of.

I've been wanting to do a comic steeped in old school hip-hop for a while, but, I couldn't imagine what it would be able. I think the work of Ben Marra on Gangsta Rap Posse really made me jealous, so I figured the most logical approach would be to just do a linear history of rap music. It's something I love. It's something I know a ton about already. It's visually interesting. I'd challenge my knowledge on the subject against almost any other cartoonist, so it felt right.

I tested the waters with this strip, comparing my love of comics and rap music, and people really responded well to it, so I decided to jump into this comprehensive Hip Hop Family Tree project. 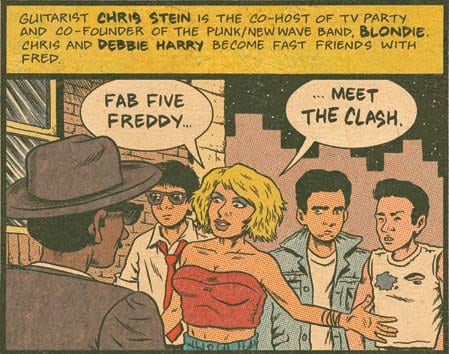 ====
Ed: Different rappers and music biz people have been propagating the comics online through all the social network platforms. Chuck D retweeted a strip. Public Enemy's "Media Assassin" Harry Allen has agreed to write an intro whenever I decide on a publisher, we've been corresponding a bunch and he really likes the work. Kool DJ Red Alert gave me his phone number to interview him when the time is right. Talking Heads drummer, and Shady Side Academy alum, Chris Frantz, shared a strip where Fab Five Freddy met Blondie, and Fab, himself, shares and praises every comic where he appears,
https://twitter.com/fabnewyork/status/174582789151272961 .

Frank: Wow, it's like you've arrived. You're a made man, as they say. That's amazing.

Ed: Thanks, Frank. I'll feel more comfortable once I decide on a publisher, the format, and all that, but the feedback so far has been really motivating. 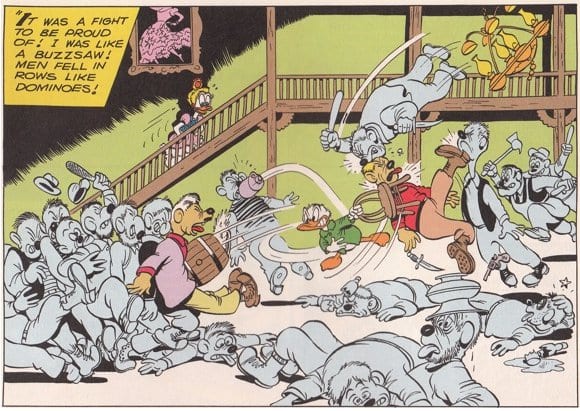 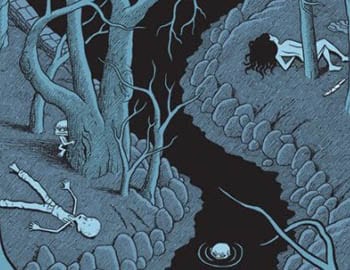 To Hell and Back