Today on the site, Mark Newgarden returns with an excellent interview with Zippy the Pinhead cartoonist Bill Griffith, largely revolving around his new book, Nobody's Fool, a biography of one of his major inspirations for Zippy, Schlitzie.

Mark Newgarden: Why Schlitzie (and not, say, Zip)?

Bill Griffith: Schlitzie's appearance in Freaks [1932], which I first saw in 1963, was the inspiration (years later) for Zippy. Barnum's pinhead, "Zip the What-is-it," only supplied me with Zippy's name. It's been pretty well settled that Zip was a fake. His sister said he could converse and behave like anyone else---so he was an actor. Schlitzie, on the other hand, was the real thing.

Couldn't a Zip biography (the life of a faux pinhead poseur) have piqued your interest in the way that the life of Schlitzie did?

Nobody’s Fool is explicitly grounded in solidly researched historical material, yet there are many intimate details (which feel even more “real”) that must at least in part be invented, imagined, or divined. As a cartoonist, how do you approach biography?

I adopted the "fly on the wall" method in creating many scenes in the book. I always made sure I had the best evidence before doing this, but I took artistic license to flesh out interactions and events. After months of source reading and several key interviews I did with two people who knew Schlitzie in his later years, I felt I was well grounded enough to make educated guesses about how events would play out. Cartoonist's intuition!

Drnaso’s second book, Sabrina, the first graphic novel to be nominated for the Man Booker Prize, is a longer, more elaborate study of the desire for initiation and the fear of exposure. The title comes from the name of the young woman who disappears in its opening pages. ‘It’s one of those horror stories you hear about,’ another character explains as the story begins to circulate. ‘She just never came home.’ Surveillance footage from the night Sabrina vanished shows her a block away from her apartment in Chicago, then nothing. A month later, her bus pass is mailed to her parents. Soon copies of a videotape showing a woman who matches her description being killed by a man in a black ski mask are sent to news stations across the country. On the package is an Illinois return address. The landlord tells the police that his tenant, a 23-year-old called Timmy Yancey, rarely left the building and had few visitors besides his mother. In the bathroom, they find a set of neatly folded black clothes and a black ski mask. Lying in the bathtub, which is filled with water the colour of blood, is the body of a young man, his mouth still curved upward in a faint smile.

—Marilyn Berlin Snell enthuses over the cartoons of Charles Addams.

What’s typically unseen in his cartoons is the source of both the horror and humor. We often (but not always!) have deniability when we laugh. When I asked individual family members to name a favorite Addams cartoon, there was eerie consensus across the half century since last we’d perused the artist’s collected works together. Two stood out: A beach scene with the shadow of a giant bird on the sand carrying something big, and a woman in a bathing suit chasing the shadow, yelling up, “George! George! Drop the keys!” 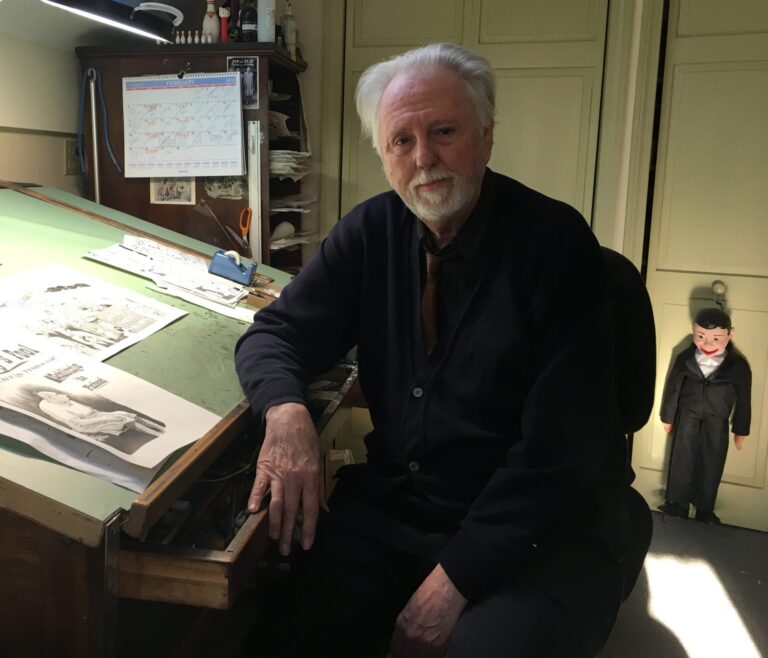 Are We Long-Form Yet?: A Chat with Bill Griffith 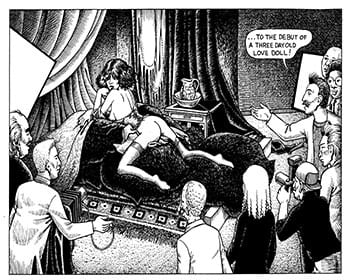