Well,folks. R.C. Harvey is here this morning, with a column on George Baker and Sad Sack:

A few months following the Sack’s debut in Yank, Baker was transferred to the staff of the magazine, and he served there for the duration of World War II. Yank sent Baker to military installations all over the world to expose him to every possible phase of Army life in order that he might reflect it in the cartoon. In the early months of Yank’s run, Baker also distributed subscription blanks wherever he went. Eventually, the magazine acquired a circulation department, which involved Baker only to draw promotional posters. One of these gave the cartoonist “the first tangible evidence” that the Sack was a success. The poster said: “Subscribe to Yank and see the Sad Sack every week.”

Baker shouldn’t have worried. As perennial low man on the regimental totem pole, the Sad Sack was popular from the very start. He epitomized the frustrations and disappointments of Everyman, dragged somewhat reluctantly into a military bureaucracy he didn't understand and could never master. The Sack's adventures took place entirely in pantomime; each cartoon was a series of eight-to-ten borderless pictures that progressively depicted the cascading persecution of the week. Like some dumb animal being inexplicably punished for behaving in a perfectly natural way, the Sack was all the more pitiful for being mute.

—Interviews & Profiles. Fast Company talks to Neil Cohn about his research into the visual grammar of comics. Ruben Bolling and Vanessa Davis are guests on the latest Gweek. Jesse Reklaw was on Inkstuds. Comics Journal regulars Joe McCulloch and Sean T. Collins talk about the business of alternative comics with Tom Spurgeon. I love both those guys, but that is a very odd and even skewed discussion to read, at least from my perspective. (I'm probably too close. Maybe they're too close, too.) One thing I do think is worth saying is that given that the closing of PictureBox was a personal decision and not one forced by economics, it probably shouldn't be overinterpreted; if Dan was a slightly different guy, or in slightly different circumstances, it would still be running. And I don't agree with Sean's comment that it's hard to "imagine another 30-year anniversary of an alt-comix publisher after Drawn & Quarterly has theirs, maybe ever again." Top Shelf is more than halfway there. AdHouse could easily make it, if Chris Pitzer wants to do it. If anything, there are more stable or semi-stable small publishers around right now than at any time I can remember... A thirty-year-plus run in independent publishing has always been the anomaly. Those guys are always worth listening to, though, so go to it.

—News. Stumptown is merging with Rose City Comic Con. The comics writer Scott Lobdell has admitted to being the mystery aggressor in MariNaomi's xoJane story, and has given a statement to Heidi MacDonald. Screw publisher Al Goldstein, who employed many prominent cartoonists in his day, has died. 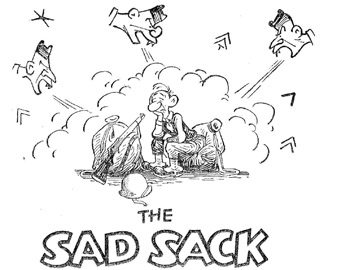 George Baker and the Sad Sack 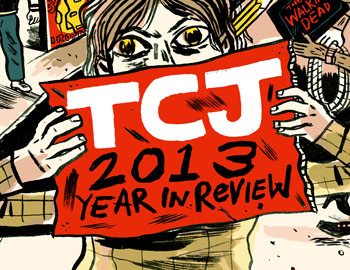