Today on the site, Ryan Cecil Smith continues his Cartoonist's Diary of life in Japan.

And Sean T. Collins reviews the mini-comics (!) of Shia LaBeouf (whom he also interviewed for Rolling Stone). Here's an excerpt from his review:

Yes, the art’s rough. But it’s also effective, in both complementing his lacerating writing and conveying emotional weight. So even though it’s likely rough by necessity, the roughness of a study-hall satirist or a first-year CCS student, it’s the effectiveness that should be the lens through which the art’s viewed. And honestly I’m probably selling it short, to an extent. The magic-marker pink aura with which he surrounds the figures in his graphic novella Cyclical, about a Johnny Blaze-type motorcycle outlaw’s last ride, both belies the macho mock-Hemingway elegy of the narrative and imbues it with the sensual road-sign glow of the American West. It’s the equivalent of the opening-credit type treatment for Drive, and it’s sophisticated shit.

Off-site, there are several comics-related distractions from your existential dilemma.

The Los Angeles Review of Books, which really quickly established itself as one of the best sources for American cultural criticism around, has launched its new website. So far, this publication has featured the best comics coverage of any recent mainstream cultural publication I can remember, and is worth following for that reason alone. (They have good reviews of books without pictures, too.)

Boing Boing has a nice profile of Cul de Sac creator Richard Thompson, and Heritage Auctions has announced a Cul de Sac-related charity auction for Parkinson's research this May.

Speaking of auctions, it's a sad commentary that the check with which DC Comics paid Siegel and Schuster $130 for Superman has recently sold to an online bidder for $160,000. (The original check had been fished out of the trash by a DC employee, whose heirs will be receiving the proceeds.)

The blogger David Brothers, who has been writing a lot about the ethics (or lack thereof) in corporate comics recently, has published a manifesto on why the recent Before Watchmen announcement and recent Marvel moves have led him to stop purchasing DC and Marvel comics (and movie tickets) altogether. I don't necessarily agree with each and every one of his arguments, but in the main I support him and find this very heartening. When Stephen Bissette called for a boycott of Jack Kirby-derived Marvel products last year, it was fairly common to hear people argue that boycotts don't work. But of course this kind of consumer awareness can be effective, especially when there are more ethical alternatives available. (As a non-comics-related example: There are a lot more cage-free eggs sold today than there were a decade ago, and that means many less chickens are being egregiously mistreated. That is a significant and good thing, even if the larger problems of factory farming remain.) It's one thing when places like the Comics Journal echo calls for this kind of protest (as a lot of commenters here stated at the time, most TCJ readers aren't Marvel zombies anyway), it's another when someone as steeped in mainstream comics as Brothers does it.

Bryan and Mary Talbot choose their ten favorite comic-book memoirs (Binky Brown is their unsurprising—and very deserving—number one, but there are a few less familiar titles there as well).

Slate writes about the politics of Archie. Does anyone actually read these comics any more, or are they merely printed as an endless supply of fodder for trend articles? I can't figure out the business model here...

Lots of people post scans of great old out-of-print comic stories online, but few provide as much context as Frank Young does whenever he posts a hard to find John Stanley story. Here's his latest, on a Woody Woodpecker tale.

Milo George doesn't much like Jack Kirby's covers for The Invaders.

There are two weeks left for Sparkplug's online publishing fundraiser. (I know I keep saying I don't want to post these Kickstarter-type things, but I guess I'm just going to try to be super-selective about it.)

Finally, the Hernandez brothers are interviewed at Meltdown: 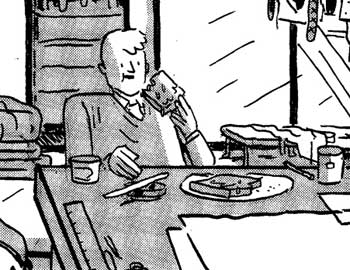 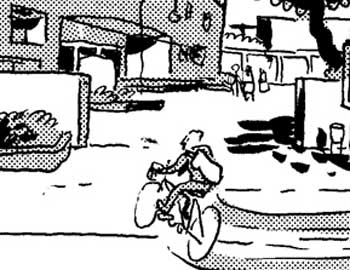