That's right, I'm continuing my pointless quest to see every super hero movie this summer. So no links today. And anyway, what would you want to know? The sky is falling, so let's go watch the real reason Marvel and DC keep publishing comics. Tuesday night I made Tim come with me to see a preview of X-Men: First Class because Dapper Dan sees these movies so you won't have to!

As you may know, this installment in the X saga is a prequel. Or a pre-boot. Whatever, it takes places in the early 1960s and shows us young Magneto and Professor X becoming the mutants that they are later on. It also introduces a ton of characters for, I assume, future sequels. What at first seems like it might be a kinda cute movie about two opposing mutants set in the groovy 1960s (by the way, the '60s stuff is done so badly that you gotta wonder if anyone even bothered to try google images or something. It's all mini-skirts and turtlenecks, but none of the visual inspiration, which is kind of a shame. In other words, there's no style in this thing.) just expands and expands like a checklist: The Holocaust, the Cuban Missile Crisis; go-go dancing; the CIA; The origin of Cerebro; the origin of the fancy plane; the origin of the Mansion; the origin of Magneto's helmet; the origin of the costumes. I'm almost surprised they didn't throw in a quick lesson on human reproduction ... wait, they basically do! And then all around these bits there are submarines and planes and missiles and Russian hideouts and even a scene in a bar in Argentina that seems like a direct homage (too soon?) to Inglourious Basterds. Oh man, it's endless.

It balloons so much that we even get an A-Team-esque (lord of prose forgive me for that) split screens of mutants training and high-fiving, frequent cuts to an enormous map of the world with cute little missile and tank symbols assembled to show the Cold War positions, and even this scene, which reminds me of the 1960s Batman TV show: 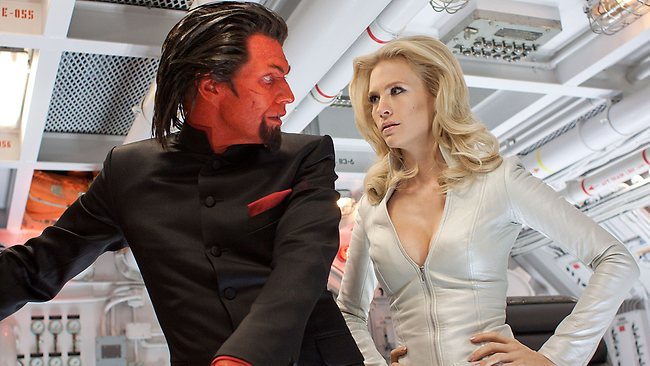 Yes, that's a guy in red make-up named Azazel, a la the TV show Angel, and poor January Jones, absolutely wooden as Emma Frost, steering a submarine. There are lots of shots of them steering a submarine. Hilarious. Couldn't Sebastian Shaw hire qualified submarine people? Like so much of the movie, it's incredibly goofy, but not intentionally. I mean, I wish it had been goofy and fun, but there's too much "Mutant and proud" talk and all together too much on the "tragic" bro-mance between Professor X and Magneto to really make it all together tongue-in-cheek.

There are some requisite crises, but there's no time to actually focus on anything because the director, Matthew Vaughn, keeps moving us from origin/set-piece/set-up to another. For example, the three images below, all shot the same way, recur throughout the film: Two people talking earnestly to each other. This gets old, since the dialogue is so cheesy. 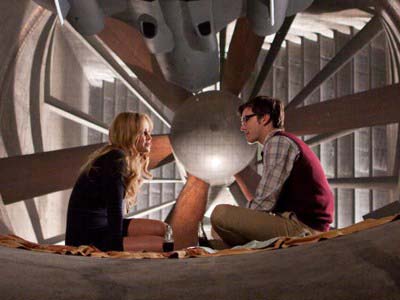 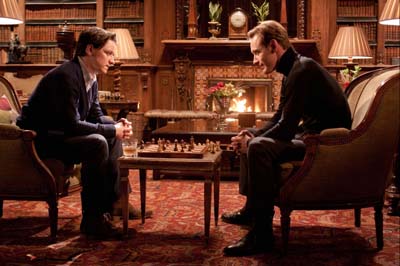 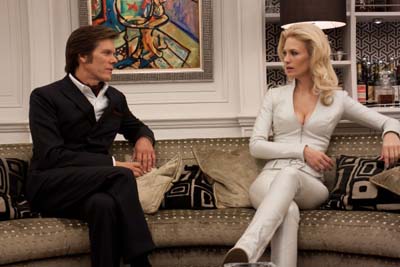 Matthew Vaughn and co. just couldn't decide where to focus, and so the focus is nil. Couch talking to missile launching to beer drinking, all played the same, with no sense hierarchy. Just endless stuff thrown at us.

It's funny, at least the Iron Man-model films, including Thor, as well as the first two X-Men films, have a clear dramatic arc and a central narrative, but here there's just factoids. X-Men: First Class might be fun for trivia buffs, or if you have a macabre interest in "spot the swipes" but for the rest of us it's a bit of a chore. But, I will say I was relieved to note that I didn't spot a Stan Lee appearance. Tim says he will probably pop up in Green Lantern. Here's hoping! See you next time, faithful readers. 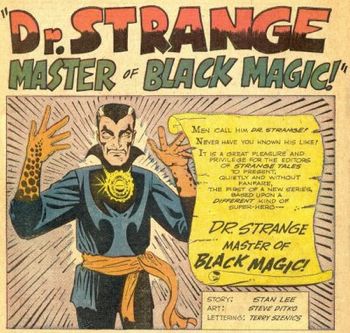 From a Point Between Rage & Serenity 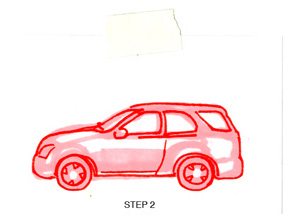