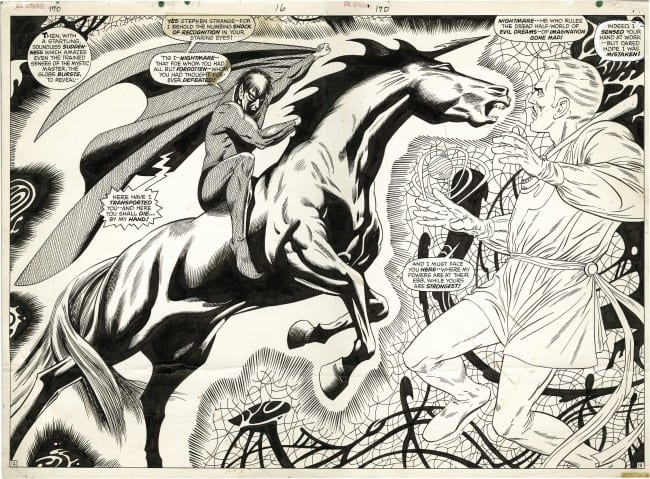 Though he never quite made the front ranks of comic book artists, Dan Adkins had a long career in the comics business, mainly as an inker over artists like Wally Wood, John Buscema, Gil Kane, Gene Colan, Bill Everett, Herb Trimpe, John Byrne, Paul Gulacy, Barry Windsor-Smith, Steve Ditko, Rich Buckler, Don Newton, Keith Pollard, P. Craig Russell, and almost too many others to really count. He was also an accomplished penciler, and occasionally dabbled in script writing and painting covers for magazines like Eerie, Famous Monsters of Filmland, Monster Parade, The Savage Sword of Conan, and Masters of Terror. Adkins was also a fairly prolific illustrator for the science fiction pulps, contributing art to publications like Galaxy Science Fiction, Infinity, Fantastic, Spectrum, Amazing Science Fiction, and Worlds of If, as well as covers to sci-fi paperbacks. Working with his comics mentor and biggest influence, Wally Wood, Adkins also contributed illustrations to Argosy. Among his many clients was the game company, Parker Brothers. In his comics career, Adkins worked for Marvel, DC, Tower, Warren, Charlton, Dell, Eclipse, and Pacific Comics. 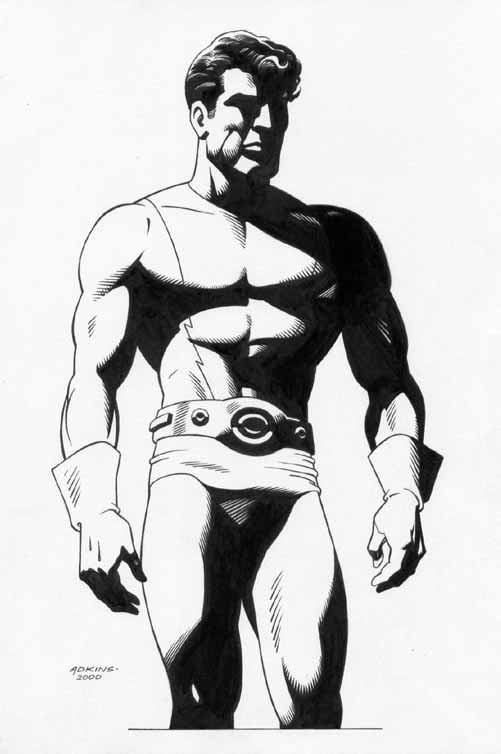 At the time of his death, he was mostly living on the proceeds of private commissions for comic art collectors, usually drawing characters he’d worked on in the past, such as Tower Comics’ Dynamo and the Iron Maiden, Vampirella, Batman, the Sub-Mariner, and so on. Like many old-time comics professionals, Adkins never managed to build up much in the way of savings or assets, though his art was highly regarded by comics fans, who voted him one of the 100 Best Comic Book Artists of all time.

Born in Midkiff, West Virginia, in 1937, Adkins grew up reading comics, a habit that only increased at age 11, when was stricken with rheumatic fever, which left him paralyzed from the waist down for half a year. During that time, with little else to occupy his time, Adkins devoured comic books like Curley Kayo and Red Ryder. After he recovered from his paralysis, he continued reading comics, and discovered E.C. Comics as a teenager, something he mentioned to Roy Thomas in an interview in Alter Ego Vol. 3, #8: “We’d be looking for Wally Wood covers at the drugstore in our home town every Tuesday and Thursday; that’s when the comics used to come in. I got in around Weird Fantasy #11 or 12, just when they really started getting good… I liked Williamson and Davis and Crandall and Evans… all the top guys were my top guys. I wasn’t into DC Comics or super-heroes at that time. Later on, I got into Kirby.” 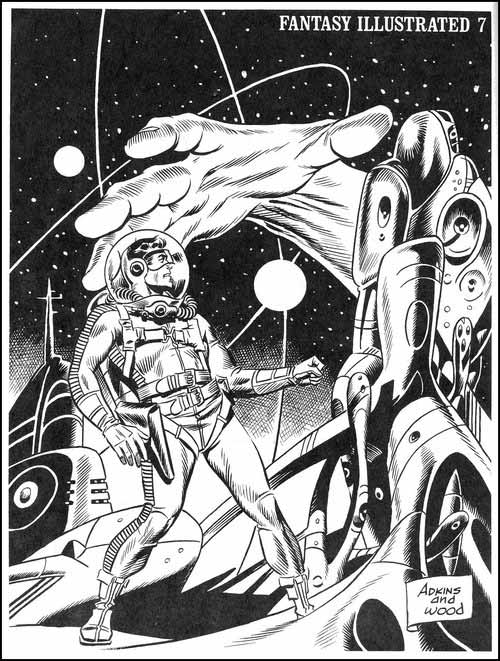 After graduating from high school, joined the Air Force, where he was stationed at Luke Air Force Base in Phoenix, Arizona. While in the Air Force, the artistically inclined Adkins worked as a draftsman, updating blueprints, illustrating electronic schematics, and design changes. In addition to these duties, Adkins also created posters for the base library and movie theater. While still in the Air Force, Adkins used the office mimeograph machine to start a small fanzine entitled Sata in 1956. It was here in Arizona that Adkins made friends with Bill Pearson, a fellow writer, artist and comics fan, who would later introduce Adkins to Wally Wood. Pearson soon signed on as Sata’s co-editor, and later took over the magazine completely, concluding a run of 13 issues with several that were printed using photo-offset printing. During this time, Adkins also contributed illustrations to such famous early fanzines as Amra and Xero.

When he left the Air Force, Adkins moved to New York City, where he tried to make a living doing illustrations for the low-paying science fiction pulps. He fleshed out his paltry earnings with work for commercial art studios, including Kram, Le Wahl Studios, Advertising Super Mart, and Chartmakers At age 24, Adkins became the art director for several Hearts magazines, American Druggist and New Medical Material.

He didn’t enter the comics field until 1964, when Bill Pearson introduced him to Wally Wood, who then asked Adkins to join his studio as his assistant. His work with Wood is some of Adkins’ most famous, for he assisted the master cartoonist on all of Tower Comics’ superhero titles for 16 months, penciling, inking, even writing the adventures of the Thunder Agents on occasion. One of his scripts, “A Matter of Life and Death” (T.H.U.N.D.E.R. Agents #7), featured Menthor giving his life in a battle with the evil subterranean Warlord, causing a group of outraged fans to invade the Tower offices in Manhattan to protest the superhero’s death, which was a very unusual occurrence back in the 1960s. 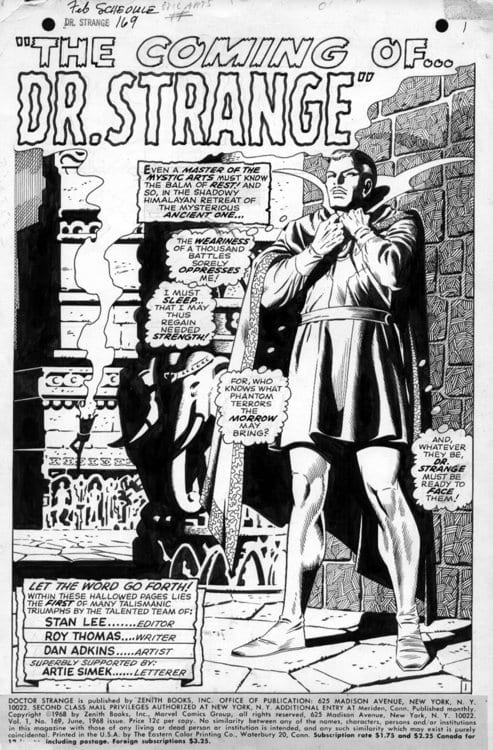 Aside from working with Wood on the Tower Comics titles, he also assisted him with art for Warren magazines, and Western Publishing comics titles like The Munsters, Total War, and the film adaptation, Fantastic Voyage. In the mid-'60s, Adkins moved over to Marvel, where he had a notable run on the “Dr. Strange” strip in Strange Tales, starting with issue #161. Adkins contributed many imaginative covers and interior pages to this supernatural strip, as well as inking The Submariner, Conan the Barbarian, The Inhumans, The X-Men, Master of Kung Fu and many, many other characters. For DC, Adkins is best remembered for his work inking Batman and Aquaman. 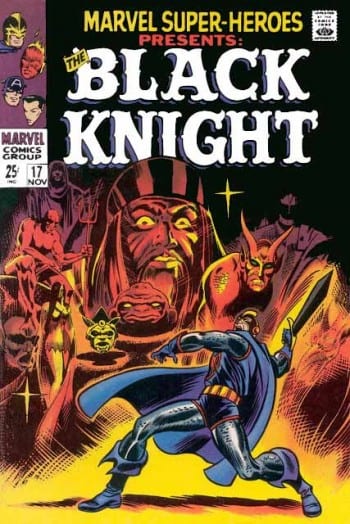 Despite drawing more than 130 covers for Marvel, inking the work of at least 70 different pencilers, and contributing to almost 900 comic books, Adkins never achieved superstar status. In the end, he was just one of many competent draftsmen and inkers who worked in the comics industry. During his five decades as a professional artist, Adkins was notorious to some fans for his frequent swipes from other artists such as Frazetta, Williamson, Virgil Finlay, Johnny Craig, and of course, Wally Wood, especially when he was doing his science fiction illos. In many cases, it’s easy to recognize exactly from which stories or covers Adkins is swiping. Some of his comics work and cover paintings featured swipes from movie stills, notably his cover for Eerie #12, which is based on a still from a 1940s “Mummy” movie. 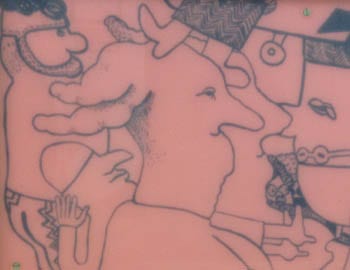 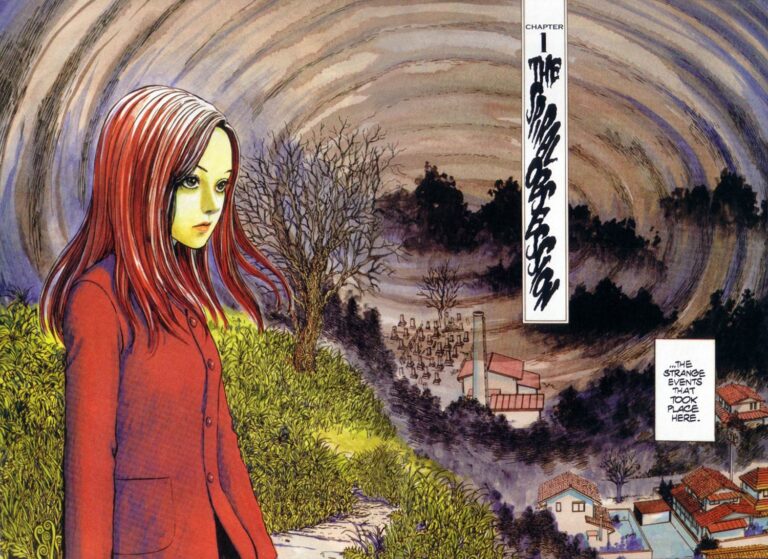