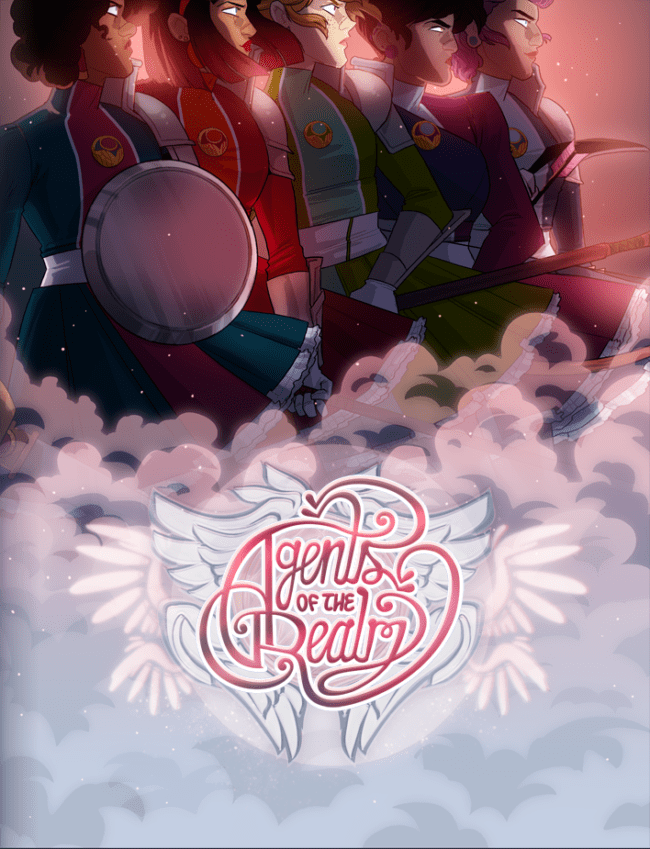 Agents of the Realm: An urban fantasy coming-of-age comic webcomic about five college students that become friends and world-protecting magical girls drawn by Mildred Louis. Mildred's comic draws deeply on classic magical girl comics, the most well-known being Sailor Moon and its unwilling teenage heroine who becomes moon warrior and space queen. Norah, the Agents' lead character, is an even more unwilling, brusquely insecure, and snarky heroine but still reaches out to the people around her, forging friendships that eventually form her warrior team.

Mildred's art is exemplary of what I call "Tumblr style," a look that's cropped up around this fourth generation of webcartoonists, a confluence of unexpected, eclectic influences and inspirations coalescing into a single, quirky style and executed through a digital medium. Tumbling is actually a pretty good descriptor of what a lot of internet-born artists go through who cut their teeth on filling DeviantArt galleries with fanart and OCs, spending hours in oekakis and taking cheap Gaia commissions. It’s art that’s been rolled as if in a rock tumbler of inspiration, where there’s little direction applied except for technical and stylistic trends of the current platform being used or the whims of their $10 commissioners. Art history itself is flattened out completely on the internet but especially on Tumblr where Late Byzantine pieces are posted alongside glossy superhero pinups and over-filtered anime screencaps. Your eyes start gliding over the illuminated visual noise. It takes a severe focus to keep from getting haphazardly dented, to instead be polished by the constant battering of styles. Habitual techniques leave deep tracks in one's muscle memory and absorbing the same family of visual vocabulary repetitively makes even microscopic changes feel vast. Sometimes muscle memory will beat out my will to execute a new texture or a new type of line. Only repetition carves space in my mind for it to exist but it's like pulling teeth as I get older. Deeply rooted teeth. With Mildred, I see the impact of the animated Sailor Moon series, cleanly lined and expressive, as well as other early 2000s Toonami toons in the bright cel coloring style, blurred shallow focus, dynamic beady pupils. There are also other cute quirks, for example when tiny panels with character's heads pop-up to continue a conversation with the focal character in the larger panel, an anime/manga technique that I find really charming. It's a style that can swerve hard between being in a constant state of growth and becoming to indulgently emulative of one's inspirations. Often though it gives us something unique and when it fails it was because a risk was taken, which is exciting to me as a reader and an artist.

Mildred's designs are refreshingly diverse, with a concentration on the bold, flexible structure of the characters' faces, especially their noses and lips. They make for fun expressions and recognizable features for all the characters, details that often lack in most comics. Her figures themselves can come off a little short and angular but still keep a sense of a line of action. I would say the weakest aspect of the comic is the word balloons: they clutter a lot of scenes unnecessarily and don't shift in shape, keeping to the same oval form, something that could be solved with more breathing room on the panel and for the scenes overall. The color-coded text is also distracting from the actual art, making the eye careen around the page, away from any sort of intended composition. The story of Agents, while drawing on some of my favorite tropes of the magical girl genre, can be a little hammy for me and the emotional one-on-ones a little forced. The narrative, especially in the beginning of the story, is farcical and overly-convenient, with characters finding their calling randomly or easily defeating monsters appearing in their immediate vicinity. Still, it's not a stretch for the genre and if you're used to those idiosyncrasies, it's easy to brush past. The tying in of characters from the past, mentors for the present cast, are slotted in through flashbacks via technological means and nebulous magical illusions. Their purpose and motivations haven't been fully fleshed out but that's expected for an unfinished series. Mildred is a highly motivated cartoonist and I'm excited to see how this story develops with so many pieces on the board. 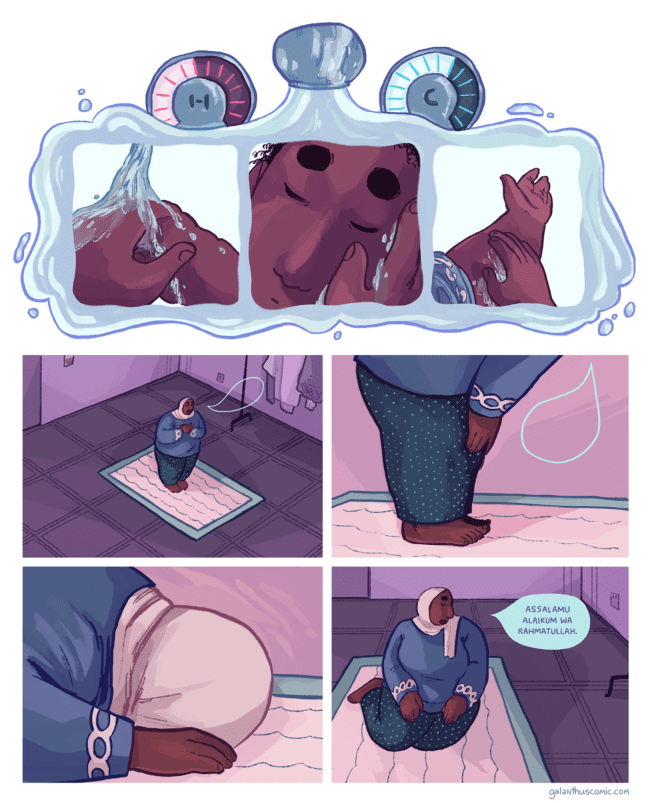 Galanthus: A space fantasy webcomic created by Ashanti Fortson that follows Farah, a factory worker turned tech assistant on a smuggling ship after she accidentally stows away on it. Only two chapters in, Galanthus has kept a naively soft-hearted tone at the center of its story, surrounding its charmingly round lead character with a cast of cute toony dragons, jellyfish, and other whimsical aliens. The edges of the story take on a more sobering tone as an intergalactic bureaucratic struggle plays out and slowly edges its way into Farah's path, as both her crew and the Imperator search for a powerful artifact. The story is intended for teens and it shows in the dialogue which is often stilted and sappy. The digital art starts out fairly rough, opting to push shape and texture instead of strong forms or clean lines but by the second chapter all aspects are noticeably stronger: figures are better constructed, forms are more solidly rendered and color palettes are being pushed or harmonized more neatly within each page. Galanthus is a little too cloyingly tender for my bitter sensibilities but I know there are some kindhearted teens out there that this comic would be great for! 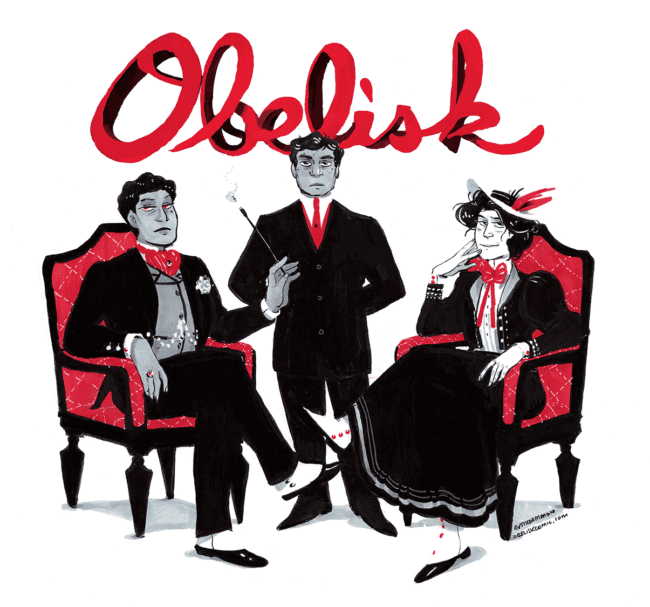 Obelisk: Drawn by Ashley McCammon, Obelisk is set during the early Progressive Era in New York City and follows Evelyn Reuter who has inherited her late father’s realty business and all its secrets. Obelisk is a refreshing respite from digitally-made comics, inked with a felty brush pen, delivering a satisfyingly chunky line, and toned with gray markers. McCammon also takes risks on interesting layouts, staggering panels like stairs down a page, leaving panels open, shattering their borders or crunching them into uneven polygonal shapes to fit neatly against the contours of its contents. McCammon's characters are also well drawn, structured and spirited in their acting, a combination that's often hard to nail. Like many of the webcomics I review, Obelisk is fairly new and just now getting to introducing a crucial cast member which makes it the perfect time to start reading! 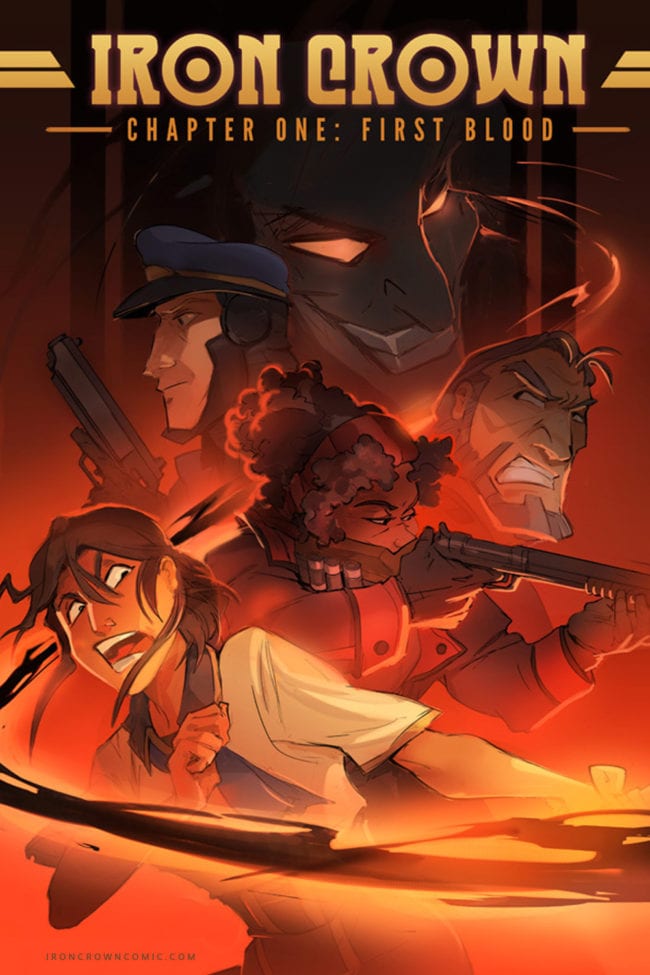 Iron Crown: Drawn by Krad, Iron Crown is an action/adventure comic that follows Diane Wiess, a dictator's daughter on the run after a coup, escorted by mercenaries and chased by demons. It is a crisply digitally-rendered comic, tastefully utilizing digital art gimmicks like blurry shallow focus and subtle CG speedlines. A common pitfall I find in digitally created comics is a spiritless line that sometimes stems from the stylus and the tablet's jitter control or the eroded line, inert from being obsessed over and 'perfected' at 500% zoom. Iron Crown has a polished look without being too rigid in line or shape and Krad, clearly sporting a sophisticated toolbox of techniques, uses them with a savvy restraint. Krad's coloring is also notably well done, adding a dimension that envelops the characters in their environment. Wherever Iron Crown goes, it'll be worth reading. 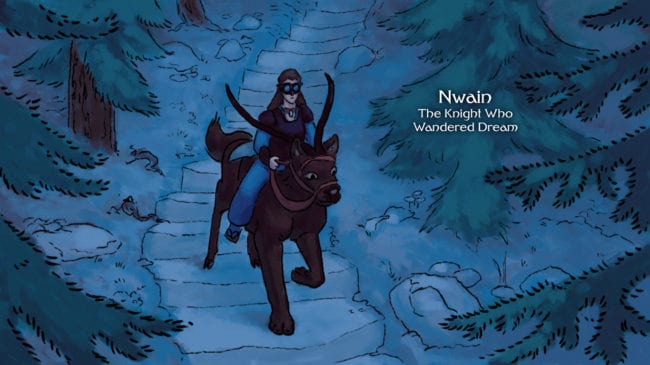 Nwain: An animated fantasy webcomic drawn by Terrana Cliff, Nwain follows a wandering knight who fights monsters and helps out those she comes across in her travels. Nwain is an ambitious project, with each panel offering a brief one to three-second animation. Some of the animations are more successful than others in capturing smooth movement or shifting the reader's point of view across a landscape while others fall flat and end up being wholly unneeded. The animated webcomic or 'motion comic' trend has popped up now and again in the last decade but hasn't really stuck around in any notable sense besides the occasional website ad or TV commercial that have some association with superheroes. Animation is kind of the antithesis to the medium of comics. Comics is about the illusion and economy of movement and time on the page while the animation is fully subject to it. That's not to say there aren't successfully animated comics like Homestuck, Thunderpaw, or some of Boulet's webcomics but it takes a subtle hand to manipulate the best of both mediums control over time/space. Nwain is suffering on both fronts, the comic itself being roughly drawn with a gritty digital line, colored in a way that doesn't seem to add much depth, unattractive word balloons and text font and dully designed layouts. The animation is slightly more laudable, with the depth of field being manipulated in technically interesting ways and figures, though shabbily drawn, make their small movements in a studied, realistic way. Still, even with the carefully animated characters, for a comic that's supposed to add a sense of life to the medium, clicking through panels to trigger word balloons to reveal themselves adds a sort of mechanical listlessness to the experience. It's a bold project to take on and I admire Terrana for doubling down on two laborious mediums for Nwain. 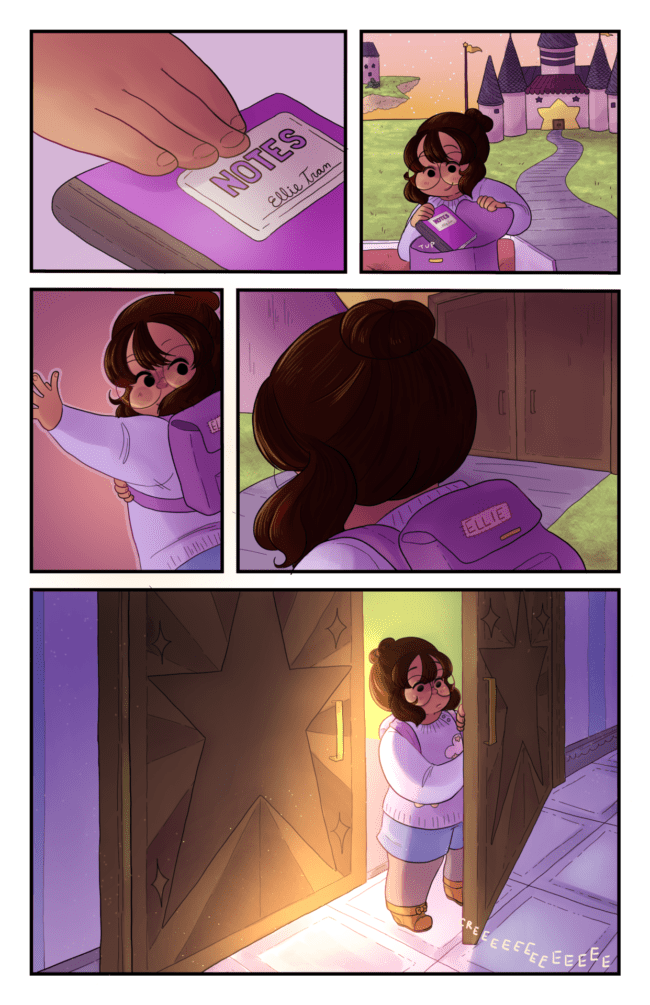 Ellie of the Stars: Someone asked me for all ages comic suggestions for their kid recently and I found this little project! Ellie of the Stars, created by Shoona Browning, follows Ellie Tran, a fourteen-year-old girl who takes it upon herself to figure out a way to save an alien Prince and Princess. I haven't read the entire archive available but it's a silly, good-natured story that focuses on friendship, kindness, and hope. It's another comic that's not for me in the least but its really cute and I respect Browning for their determination to create gentle, warmhearted stories. 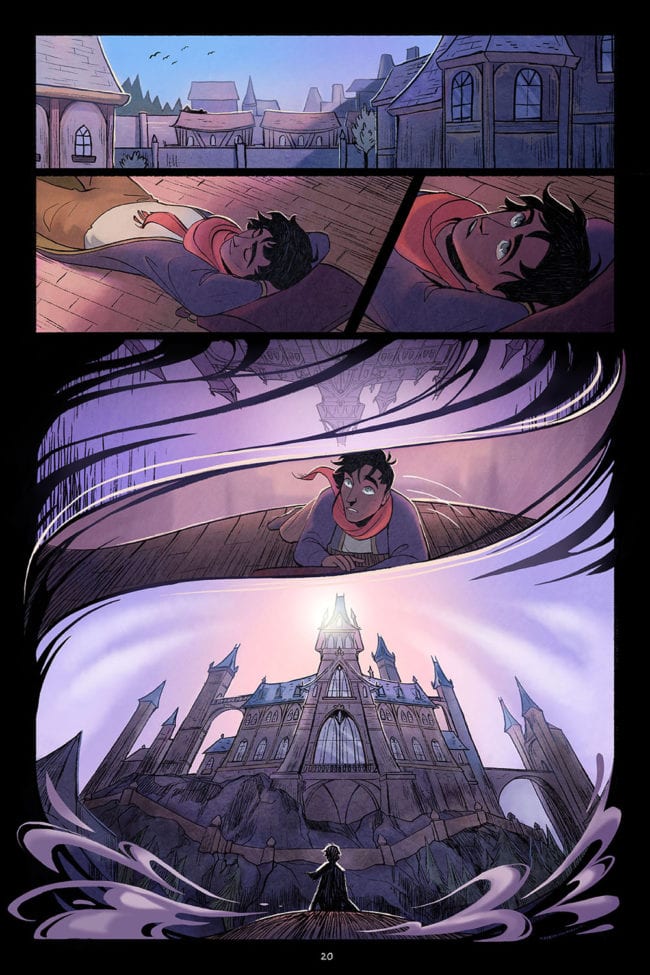 Avalia: Created by Delaney Januzzi, Avalia follows a small group of characters during wartime in the titular country and its enemy kingdom of Gestyln. Januzzi's style is rooted in the CalArts look, with simplified figures that would make them easy to animate with their pared down shapes but come off undeveloped and hammy in static form. I admire Januzzi's attempt to open her comics with a dense battle of foot soldiers and cavalry but the environments feel lackluster and the tricks one might use to depict a massive crowd just feels unpolished and amorphous. Crowds are rendered with thick vertical hatching (not even horizontal to suggest a rushing towards one another) and smudges of red that offers no energy in the execution of either. Visual tricks are crucial to comics which is already tedious even if you're only filling panels with talking heads. Building up a repertoire of visual shorthand to denote a crowd or an environment is such as important as being able to render them realistically. This inciting incident, which could have been dramatic and evocative is rendered forgettable with stylistic choices that fall flat. The environments and characters do get stronger as they exit the first chapter, with the linework and textures pulling more weight with enlivening characters but the streamlined figures feel too inchoate for me to enjoy. Avalia is a planned trilogy and I'm hoping Januzzi opts to take more stylistic chances so these pages feel less forced into comics and actually tap the medium's potential. 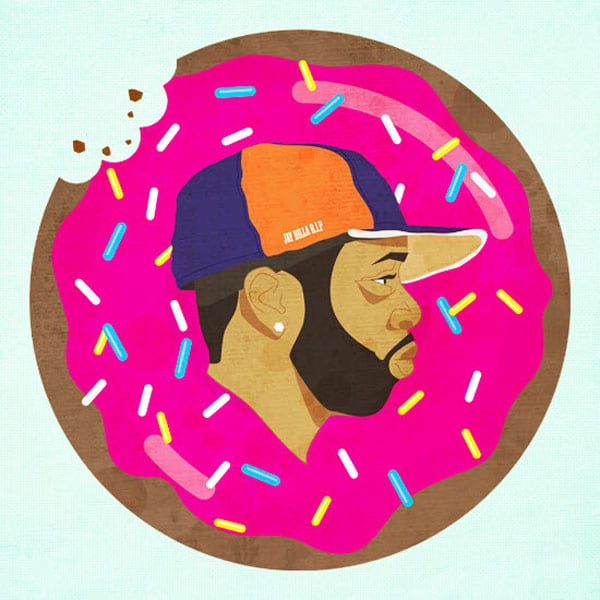 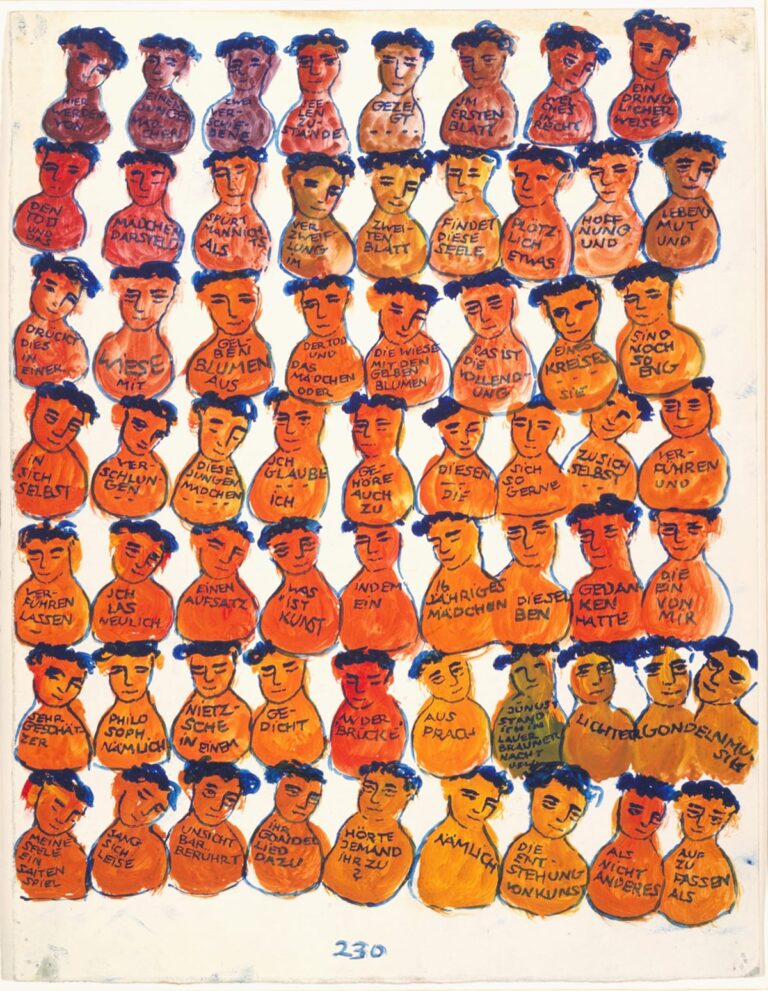