I have certain comic books for sale that just won't sell. Ever. No matter how much I slash prices. I can't give 'em away!

Yet many of these comics are good. Or have a good page or two in them. They're worth keeping around just for conversation sake. I call them "clunkers". I can't sell them but I can't bring myself to throw them out.

You see comics like this over and over again in the back issue bins. The same ones. A certain era--1983 to 1992--is always well represented in almost every comics shop in North America. (Was it because they overprinted runs back then?) Most folks flip right by these clunkers because they look like garbage--and they usually are. However, some of them are worth a second look. Here are 9 of them.

The comics pictured below are all from my "Number One" box. These clunkers aren't wacky or special necessarily. They are the perennial long box filler. The price stickers I have on them tell me they've been in the "Number One" box for four years now. They all did time in the "Quarter Bin" also.

Captain Paragon from 1983. This is an AC comic or Americomic. All AC comics have good color and production values for the early 80s. This one has a cover by Greg Guler (below): 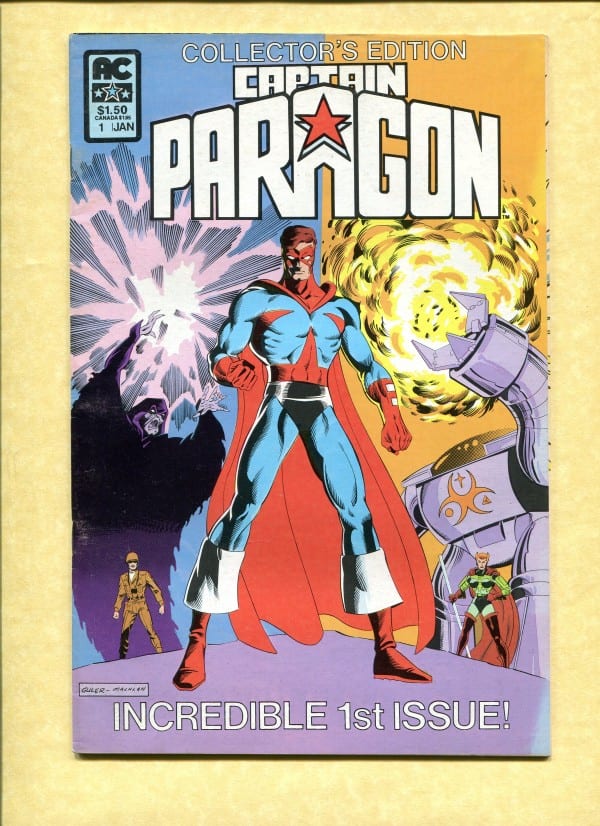 The interior art is by Don Secrease and Bill Neville. I like the "dissolve" of the face in the page below. This is one of those nostalgic riffs on the good ol' days of crime fightin' gone by: 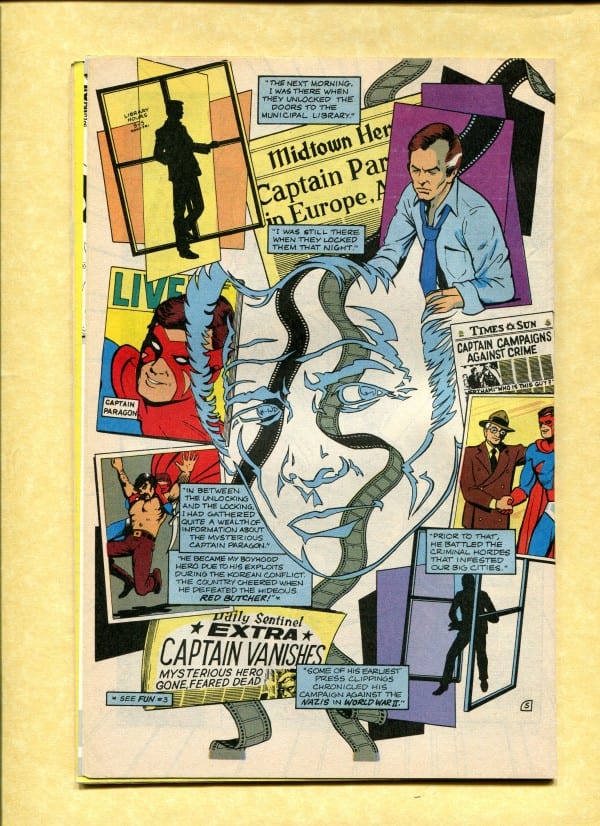 Then there is some decent action later on. The panel layout on the top tier is weird in a good way. See how the fence posts creates a sort of panel border? And the hero maintains scale as the first tier transitions into the second. Simple and clear. This page kind of reminds me of Ditko from the same period. Maybe it is the inking of the last panel (below): 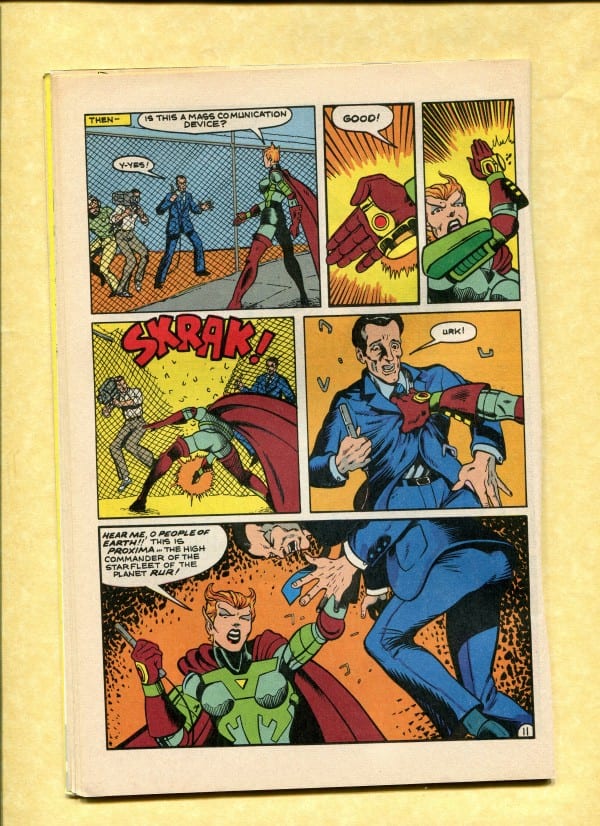 Go-Man #1 from 1989. The cover reminds me of a bad mash up of Howard Chaykin, Dan Clowes (like Lloyd Llewellyn era), and Ken Steacy. It's by Matt Wagner. Nice airbrush. 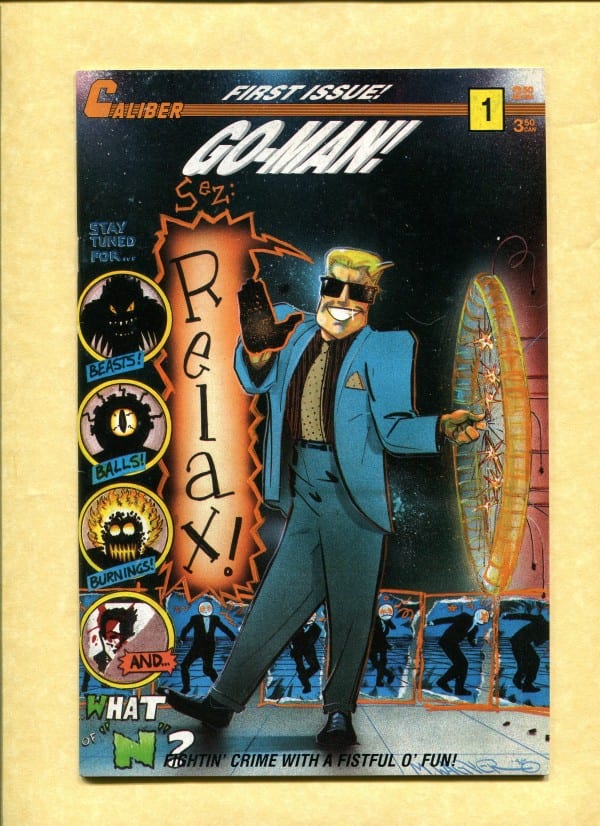 The comic inside is wildly out of date by '89. This would have been cool if it was from '86. I don't know what I mean by that but often in old comics like this it seems like it took the author years to package the material and the result looks "dated" somehow. I think Go-Man it's mostly a reprint of old material so maybe it was ahead of its time? The art and story is by Bill Widener.He has a couple good action sequences that are reminiscent of Scott McCloud's Destroy. Meaning it looks like Kirby on speed. Not bad. 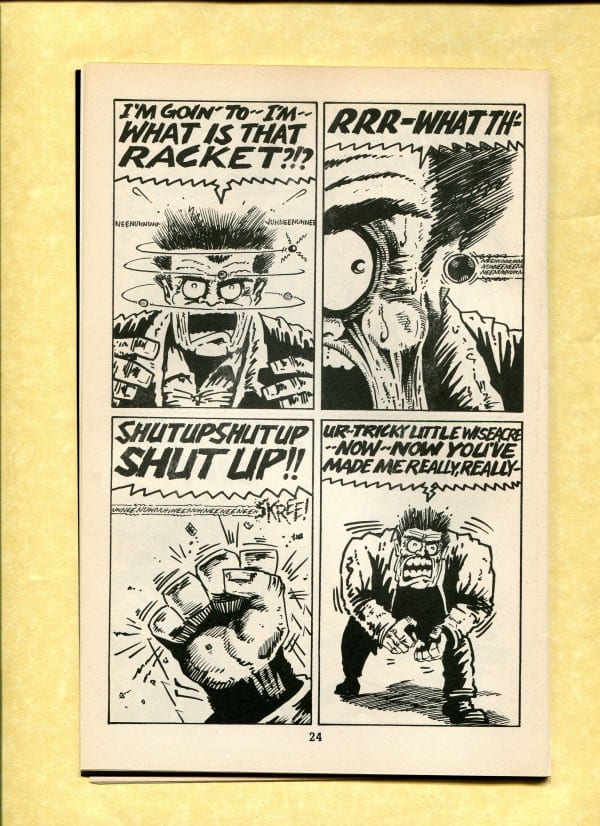 In the requisite page long explanation of how this comic came into being, the author said he got letters comparing this series to Watchmen. There's also an introduction by Matt Wagner. Almost all blurbs and intros from this era are by the same people. Seems like they were just giving away blurbs back then, haha. Here's a good example of that factoid (below): 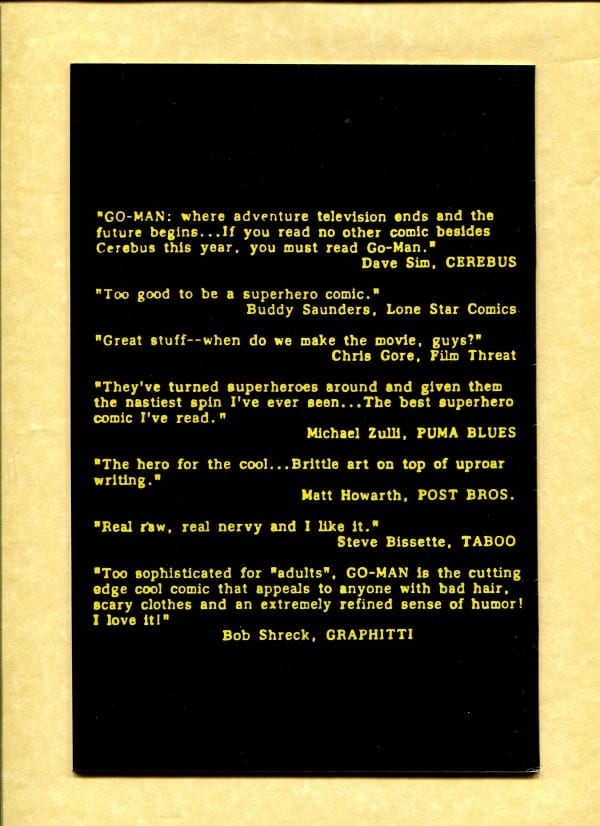 Speaking of Watchmen, here's art by Dave Gibbons. I kept these around for Jog but he never bought them. Rogue Trooper was from Quality Comics and it reprinted older UK material (below): 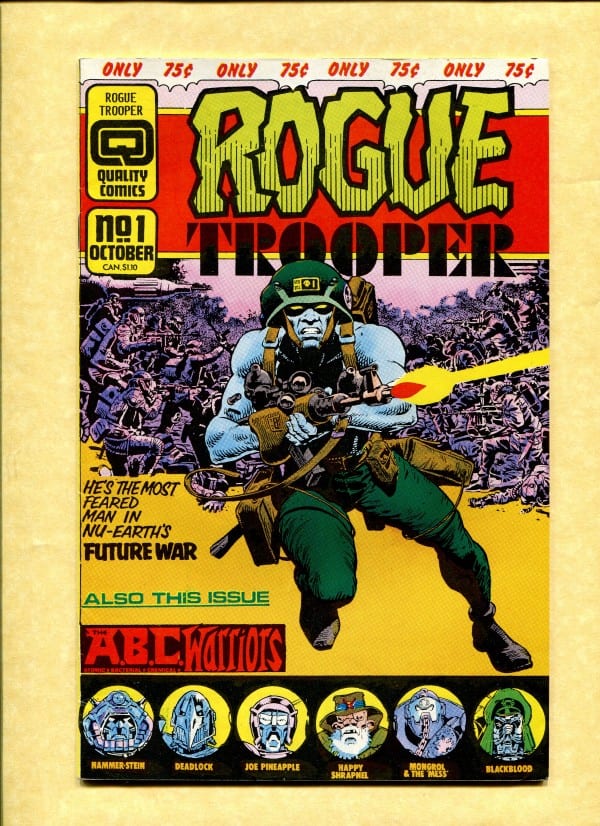 I like the printing form these old Quality Comics. Art by Dave Gibbons (below): 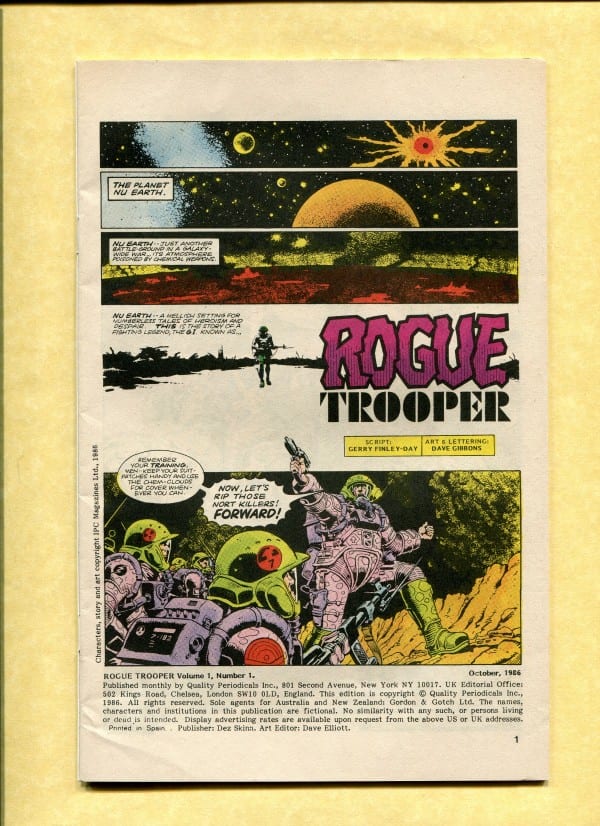 I always thought ESP-ers or "S-pers" was a dumb name for a comic or a super group. Cool cover by John Bolton (below). This is from 1986 and was published by Eclipse. I think it is a reprint of older UK material also but I can't find a single mention of what it is in the indicia or on the title page. Just the usual editorial by publisher cat yronwode about something that has nothing to do with the comic itself. 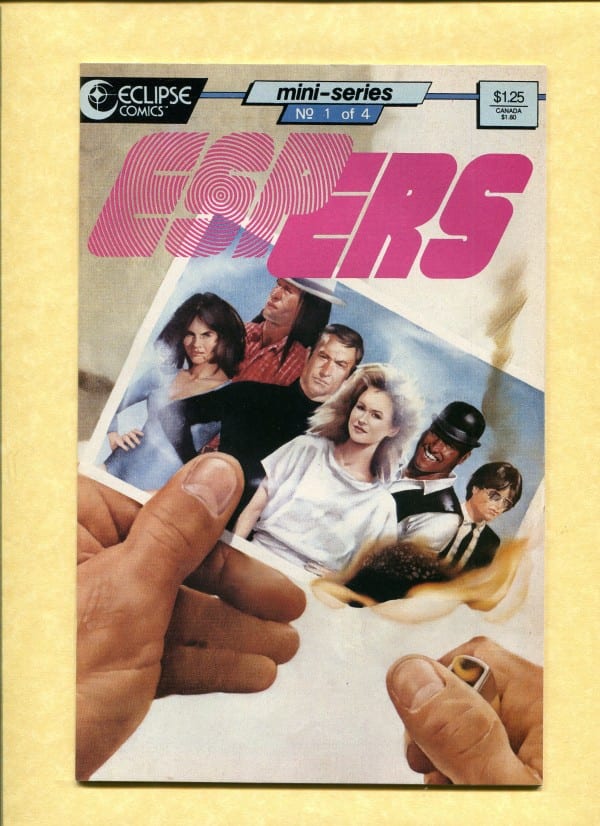 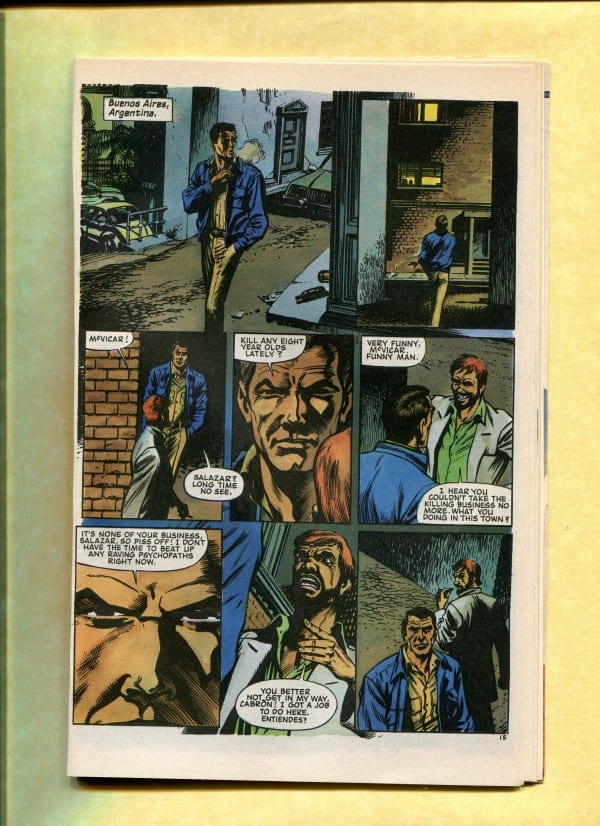 Here it is the 1987 comic that helped inspire Michel Fiffe's Copra. Great cover by Howard Chaykin (below): 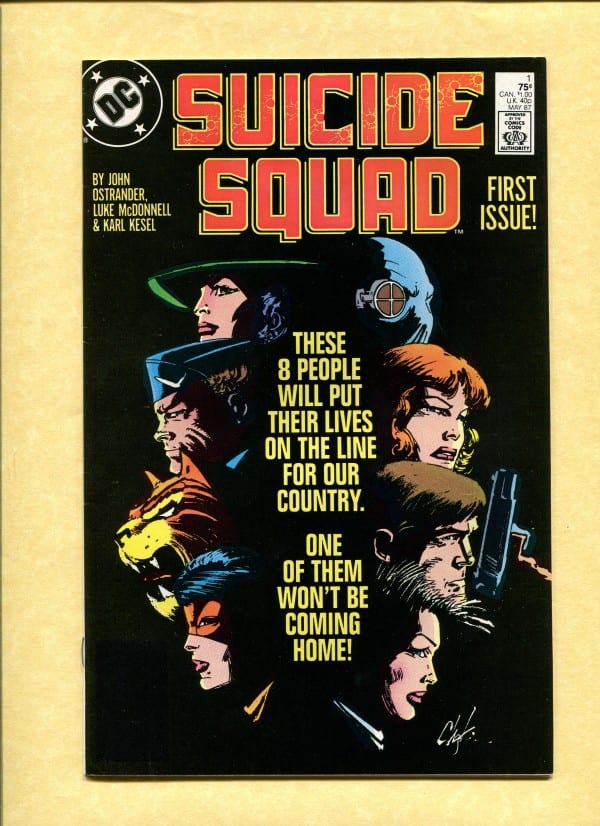 I can't sell this comic to save my life. Even if I show the potential back issue buyer this well executed action scene by Luke McDonnell (below): 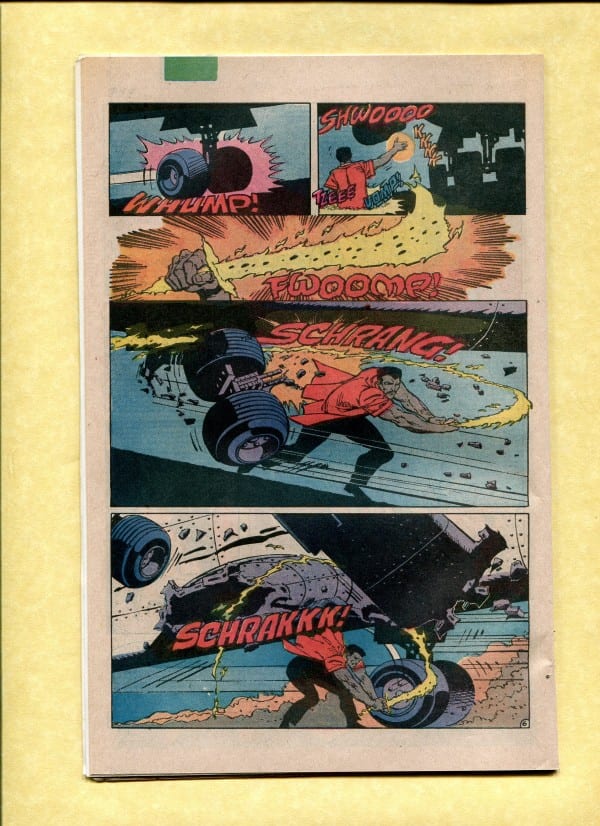 Here is one of those gritty "real life" crime comics from the late 80s. I always liked the cover. I think it is by Ernie Colón (below): 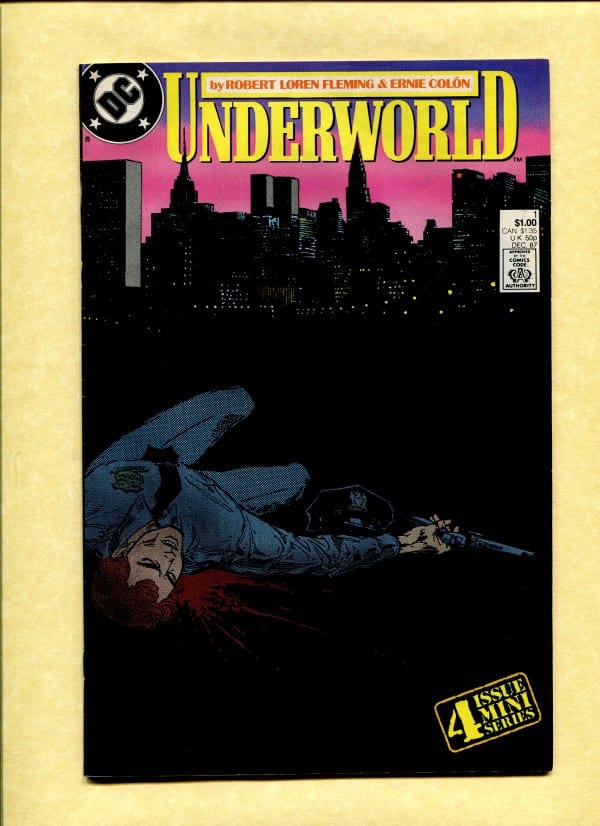 This type of layout with the inset panels inside of a wide city shot was popular in the 1980s. This is a good example of it. 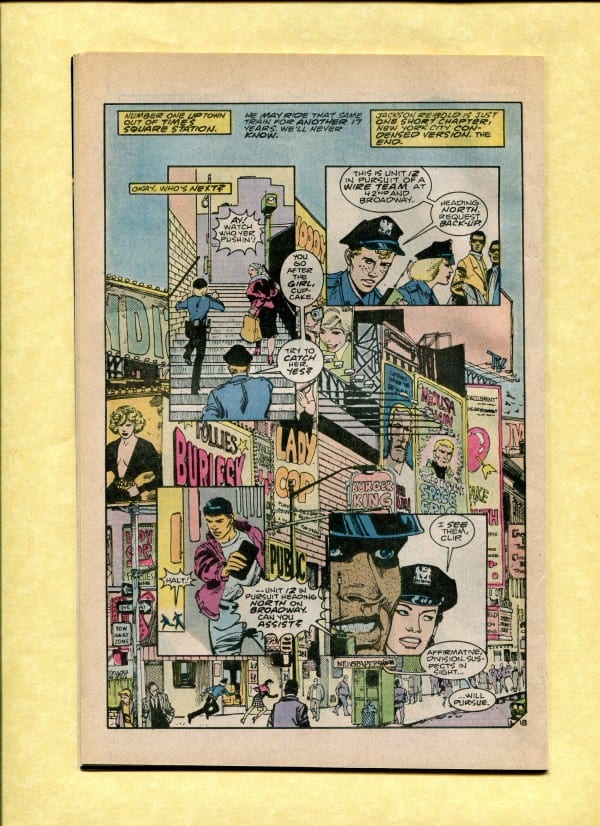 I think this is a fun action scene. Very 80's. Like a Miller Daredevil slow mo pan and reaction shot. There's a liveliness to the art that I find appealing--especially for the time period. Ernie Colón kind of reminds me of Kyle Baker here: 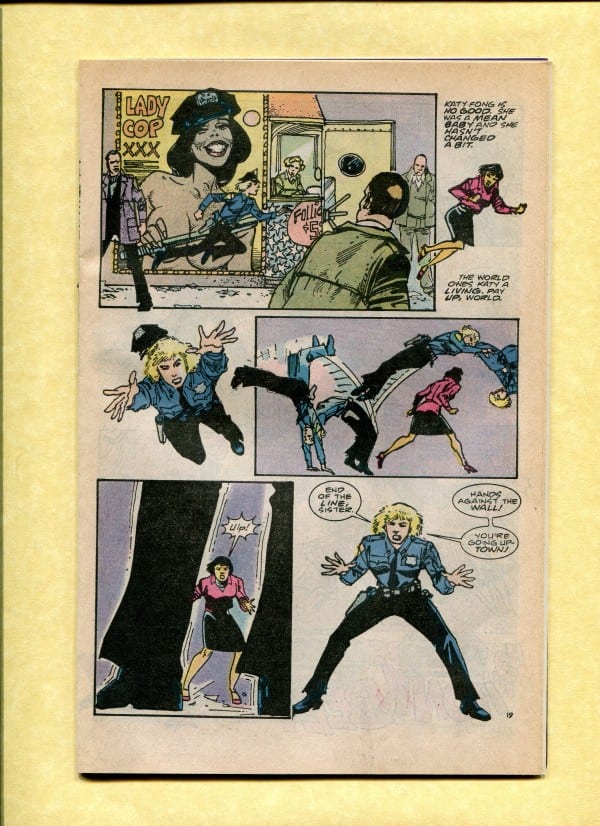 I know, I know. Don't groan too loudly. There were actually a couple New Universe titles that had decent art. 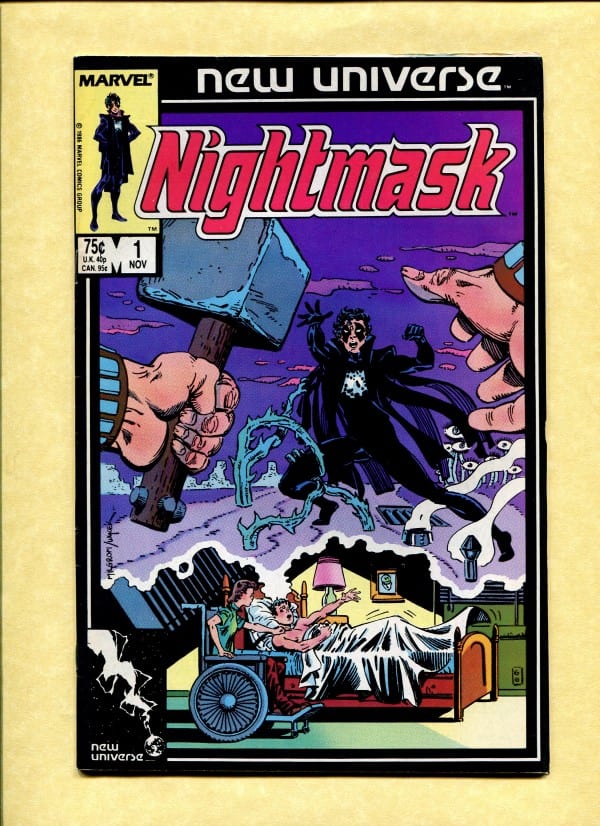 The art is by Tony Salmons and Bret Blevins. Good stuff. It's a decent Kirby Thor homage at times. Heavy on the Coletta Thor inking look. 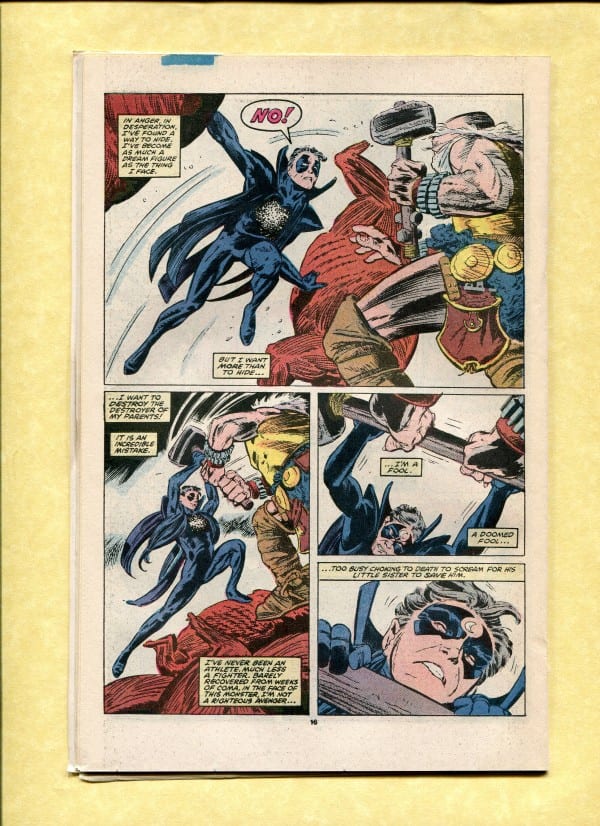 The other decent art in New Universe title was Mark Texeira and Kyle Baker on Psi-Force (below): 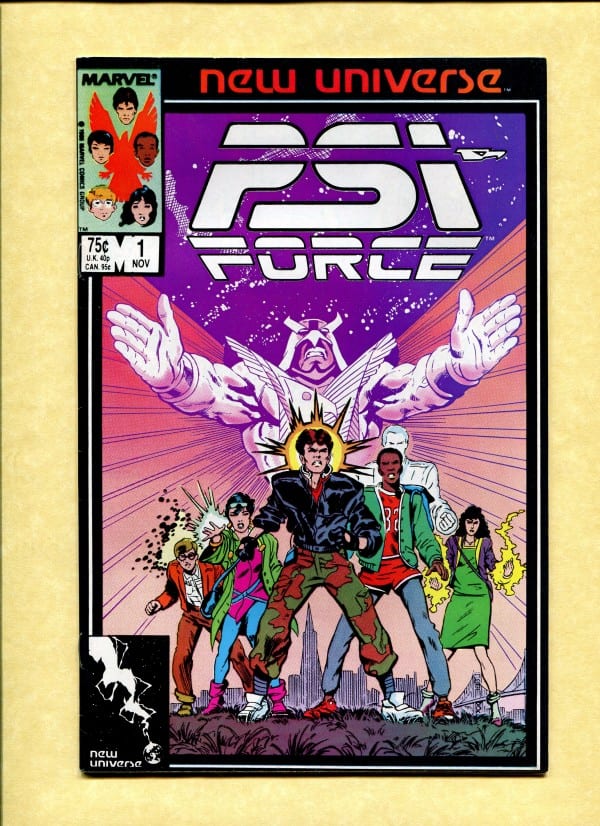 I really like the way the bottom half of the page is broken up into small panels. This is very uncommon for the time period in a Marvel comic (below): 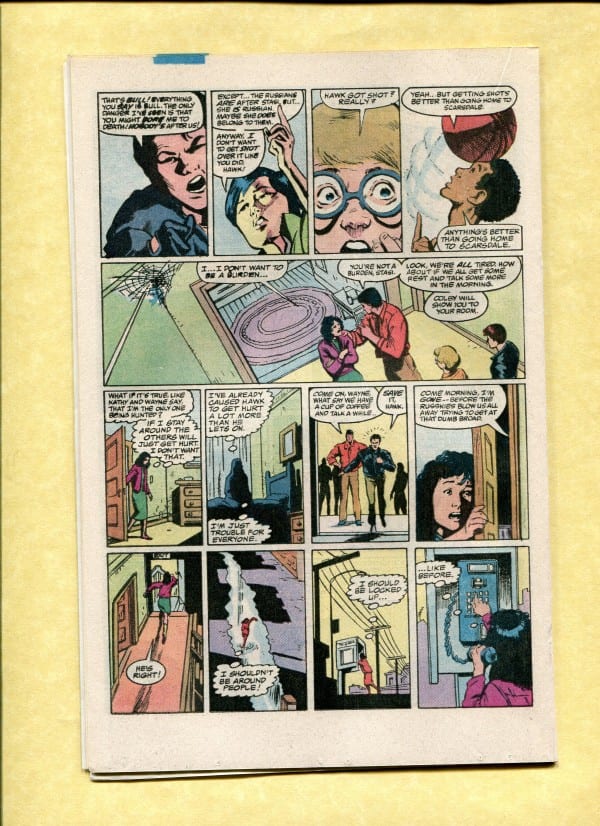 More interesting layouts for an action sequence (below): 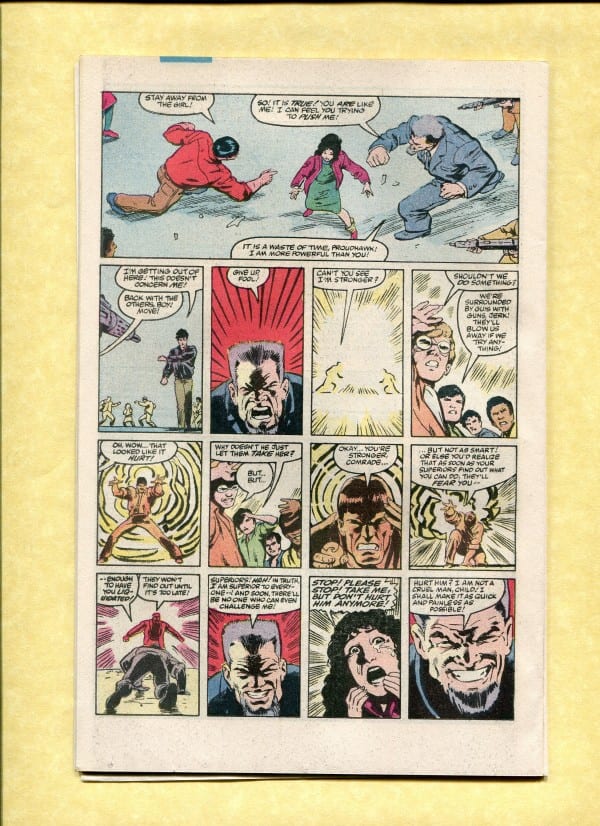 Here's another great comic that no one ever buys.  Milo wrote about over at StudyGroup. I love this cover by Kyle Baker (below): 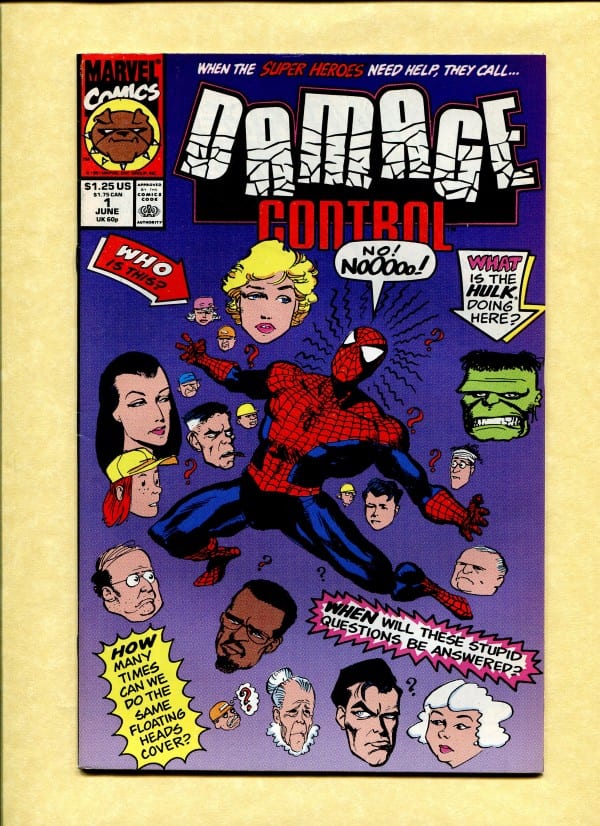 Kyle Baker's art from this period always feels "first take" to me. This is pre-digital Kyle Baker. He has such a lively line. 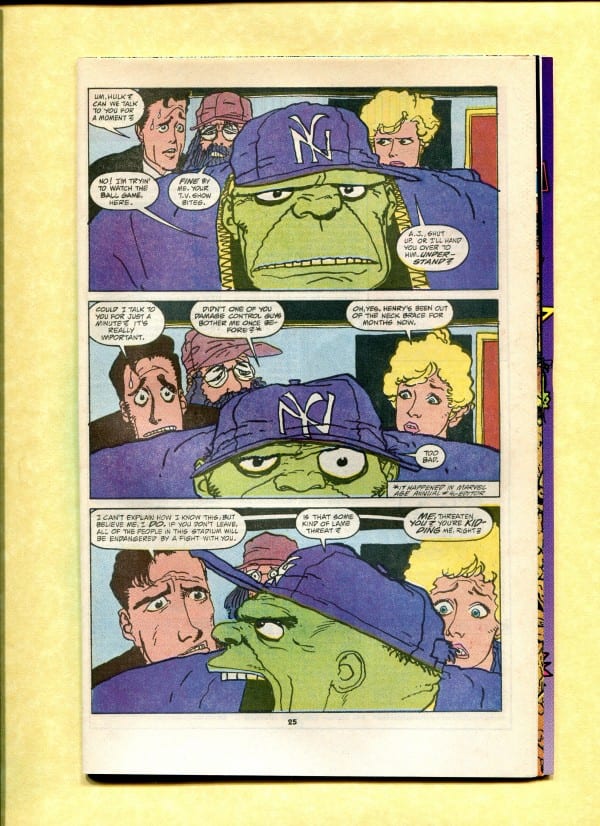 So, anyways. Maybe this can be a field guide for when you are digging through a 25 cent box of comics at the flea market. I see these comics all the time. And I buy them. But I can't ever re-sell them.  Sometimes I think about all the junk comics that I save. Will they be worth any money, ever? I tell myself that there were "junk" comics from the 1960s that were thrown out for no reason. Maybe I just have to wait another 25 years. I said something to Bill about it and he said, "It's funny to think that comics from the early 1960s--the dawn of the Marvel Age--were as old to us in 1987 as comics from 1987 are to us now".

Thanks for reading. Over and out. 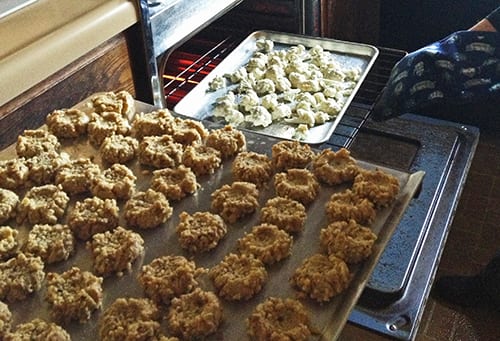 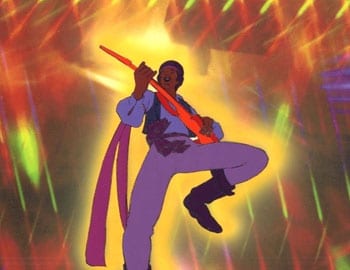