Lets see, how can I put my foot in my mouth this week?

CAB was this past weekend. Tons of fun. Congrats to Gabe Fowler and everyone else involved for pulling it off. I was set up downstairs along with Andrew White and Zach Mason. We were selling our Comics Workbook Magazine as well as our own work. And some old back issues and used graphic novels. Our own little table at the flea market.

And what a flea market it was! You know it's a good show when you can't leave your table because it's always busy. It was never slow. I got to walk around downstairs and say hello to people when it started but then that was it. We were deluged. People were spending money and we made back our expenses (to set up at the show) within the first hour. So then everything else is gravy. That's huge.

New York City shows always have diverse crowds. It seemed like there were a lot of "non-comics" people buying stuff. That's heartening. It kind of felt like the New York Art Book Fair at PS1 a few months ago, just more comics focused. Obviously. Same kind of energy. You know what I mean. I gotta admit that it feels really great to sort of transition out of the gutter. Ten years ago a show like this was a pipe dream. Now it's a reality. An economic reality. It's a good time to be a comic book maker. In New York at least.

Thanks to Andrew White and Zach Mason and Katie Brawl for holding down the fort. Thanks to Dash Shaw and Simon Hanselmann for doing signings and drawing a crowd around the table. No thanks to Tom Spurgeon. I saw you sneak by, Tom. You said you were going to pick up your back-issue pull list. Classic comic-book collector move.

I found Nicole Rudick (below). 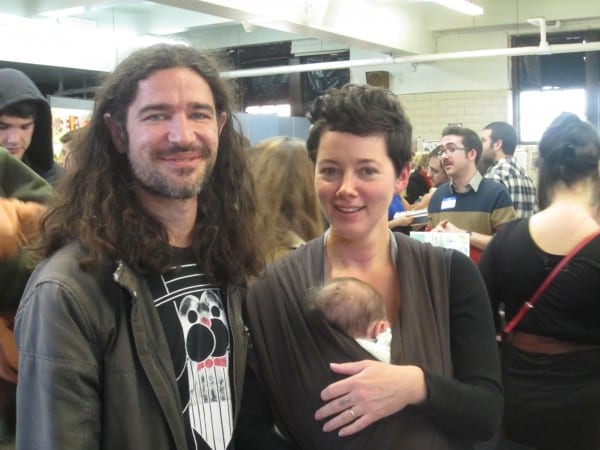 Dave Ortega - first place winner of the Comics Workbook Composition Competition - stopped by to pick up his gold medal (below). 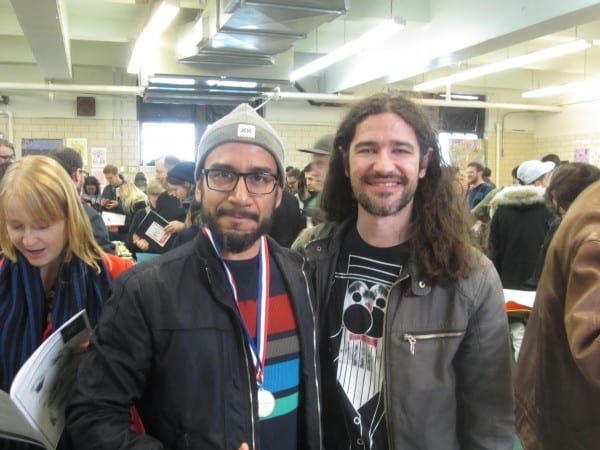 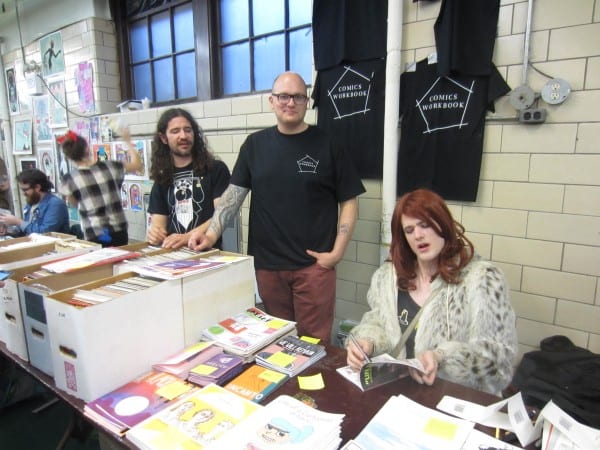 Photo-op of the day (below). 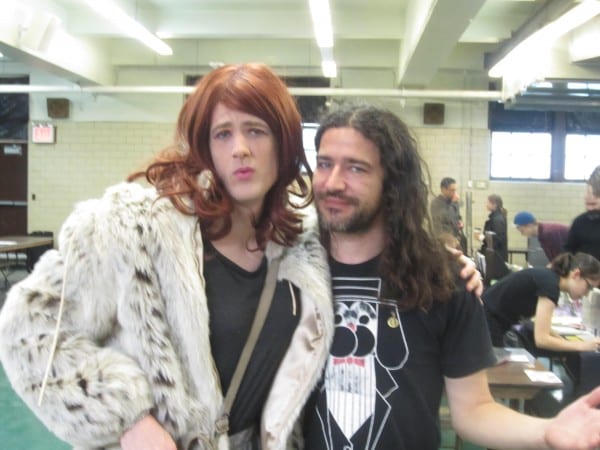 I ran a fan art contest over on Comics Workbook for Alex Schubert's new Blobby Boys book from Koyama Press. After careful deliberation, the winner has been announced. I received this message from above (below): 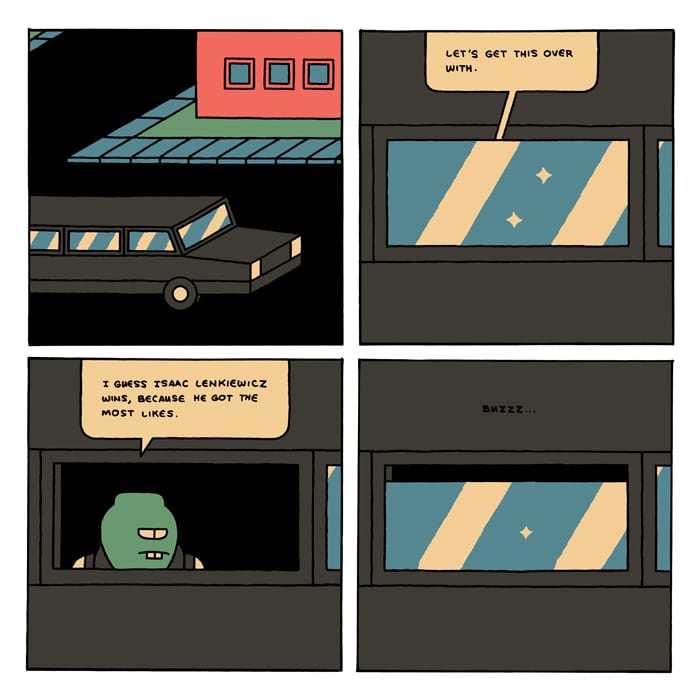 Isaac Lenkiewicz, you are the WINNER of the Blobby Boys fan art contest!! 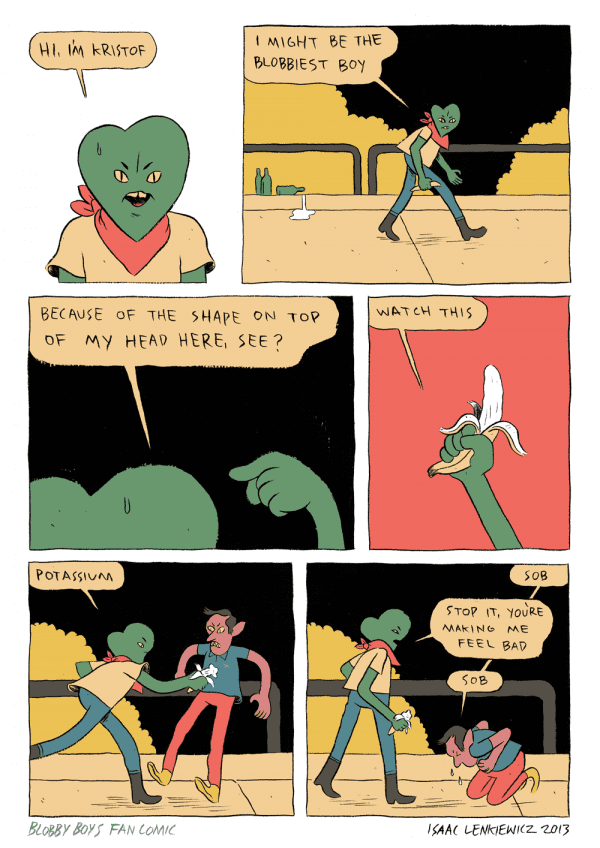 I didn't get a chance to hangout with Alex Schubert at CAB, so I thought I'd email him some questions about how his show went and what he's been up to.

Frank: How has the response to the book been? When I think of your work, I think of people outside of comics liking your comics. We sold a lot of the new collection at the comics store I work at to kids from the record store downstairs.

I designed the book thinking about that. I wanted it to be more like a magazine than a graphic novel. It has lots of short stories, and it's all broken up with full-page artwork. You can pick it up and read it for a few minutes, or just flip through it and look at the artwork. It doesn't suck you in for an hour like most longer comics.

Frank: How was CAB?

Alex: Man, I was in a bad mood the whole time. I stayed in an Airbnb, and it was the fucking shittiest place I've ever seen. I opened the door, and the doorknob fell off. Broken glass and cigarette ashes everywhere. I'm not joking when I say that I cried a single tear.

Frank: What are you working on now?

Alex: Now I'm working on the pilot for a Blobby Boys animated series. We've been working on it for a year.

Frank: How long are the episodes? Can you explain the process? Are you adapting your comics?

Alex: It's a five-minute pilot that we're pitching to different networks.

I'm working with a bunch of people -- real actors, sound mixers, etc. The main guy is Nath Milburn, who has worked on shows for Adult Swim and IFC. The band Black Dice is letting us use some of their music.

It's a new story that I wrote and storyboarded just for this.

Frank: Tell me about your show at Secret Headquaters and the zine you did for it - http://issue-press.com/item/true-art -

Alex: It was really fun to work on. I used to do a lot of fine art, but I was out of practice. It was tough to wrap my mind around making single, stand-alone images again. They were all pencil on graph paper, which is how I draw comics. I ended up making drawings of the streets of Kansas City (where I live) mixed with the streets from the Simpsons Arcade Game (which is one of the greatest works of art ever created).

I also made a zine of all the drawings, and it's better than the show was. Maybe books are just better?

Frank: Do you like reading a comic on a gallery wall?

Alex: I didn't put up any comics at that show. You don't like reading comics on gallery wall?

Frank: I know. It's just a question. I always just want the catalog for the show to print the comics in the show so I don't have to read them on the wall. I like looking at the way the originals look - but I don't like reading them in the gallery.

Alex: Yeah, I know what you mean. I went to the Charles Burns show at Desert Island while I was in Brooklyn. It was totally amazing, but I was, like, mad that it wasn't a book.

Frank: I know, I know. I'm not trying to start an argument. Sorry. Did you eat any good food in NY?

Thanks! Over and out! 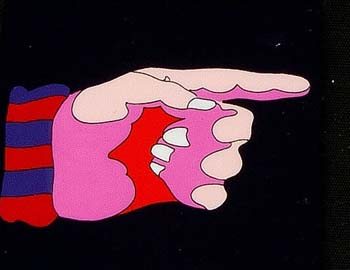 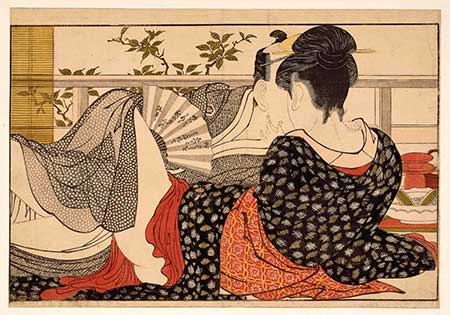