In May 2015, the National Cartoonists Society awarded MAD magazine artist Mort Drucker their first-ever Medal of Honor, “in recognition of a long and distinguished career of continued excellence that has set the highest of standards and inspiration.” Despite this honor, and the many encomiums that appeared online when news of Drucker’s death circulated on Thursday, I feel like we (and specifically me) took Drucker for granted when he was still with us. As one of the millions of kids warped by his MAD movie parodies, I owe Drucker more than my personal sadness over his passing. Here, then, are a few tentative notes on his art, using the following page from the MAD lampoon of Philip Kaufman’s remake of Invasion of the Body Snatchers (MAD #209, September 1978, page 8) to discuss why Drucker’s work was effective and beautiful. 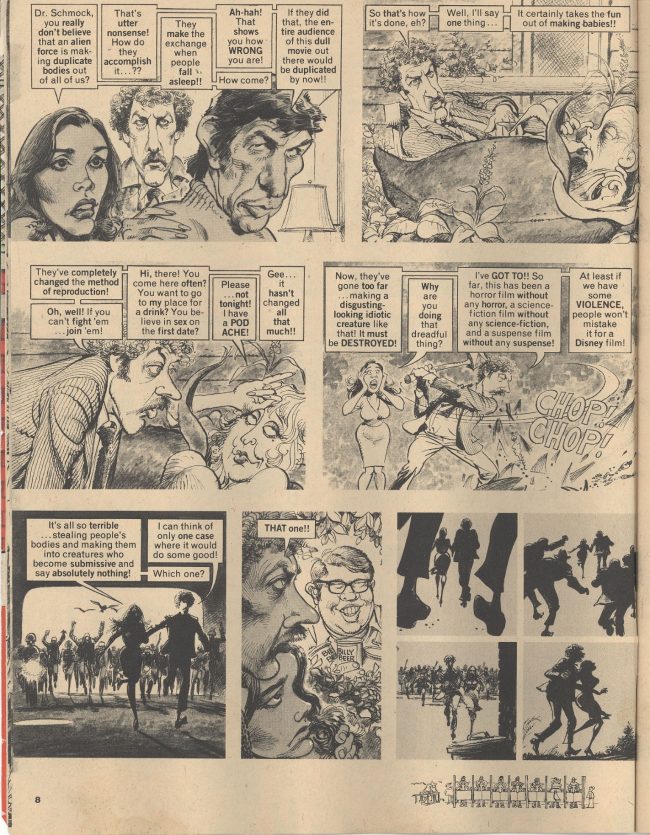 Any celebration of Drucker’s achievement should (and usually does) begin with his ability to draw caricatures of real-life faces, especially the faces of the hundreds (thousands?) of stars in his movie parodies. In the above page, Drucker only slightly exaggerates the prominent features of Body Snatchers star Donald Sutherland: his curly hair (a nest of inky caterpillars), his nose (bigger in profile), his thick, protruding lower lip. In panel one, Drucker’s Leonard Nimoy has large ears—a visual compliment to a joke about Spock ears earlier in the lampoon—and a droopy chin that runs over the collar of his turtleneck. In the first panel, Drucker also neatly caricatures Brooke Adams, even though her wide-spaced eyes and the rounded tip of her nose lend themselves to exaggeration less than Sutherland and Nimoy’s long faces.

Drucker’s understanding of caricature, however, goes beyond full-face views. Astonishingly, for each of his parodies, Drucker learned to draw the members of his celebrity casts from various distances (close-ups to long shots), angles (overhead to low-angle shots), and from all the position around the circumference of a subject’s head (the back of the head, the profile, the three-quarter shot, etc.). In the Body Snatchers parody, Drucker draws Sutherland thirty-six times in a variety of distances and positions, including a long-shot full-body image, a close-up profile, and a straight-on, dead-on version of the most famous shot in the film: 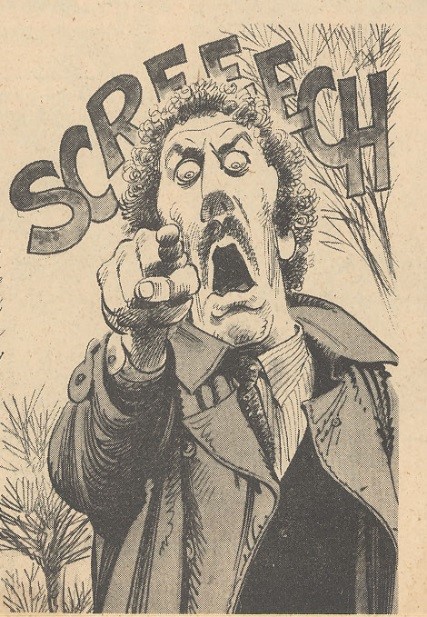 Drucker’s understanding of Sutherland’s appearance is so intuitive and complete that he can reduce it to a chiaroscuro outline (panel 5) that is still clearly recognizable as the actor. Drucker does what single-panel caricaturists do, and then repeats the subject’s exaggerated likeness dozens of times and from virtually any angle around the subject’s face and body.

Another impressive aspect of Drucker’s style is his command of body language. Critic and Drucker über-fan David Apatoff writes that Drucker’s hands combine anatomical correctness with a “springing, bouncing, joyful line,” an expressiveness that reveals character mood. In panel two of the Body Snatchers page, Donald Sutherland’s hand casually drapes across his reclining body, loosely holding a cigarette and conveying a humorous nonchalance, as if he sees people emerging from extraterrestrial pods every day of the week. The emotions shift in panel three, as Sutherland leans in to examine the pod-woman, his shoulders rising in curiosity and sexual interest; in contrast, the pod-woman is drawn in a much goofier style, with rolling eyes and her hand on her forehead in a theatrical gesture, selling her punchline about “a POD ACHE!”

Every panel features characters moving in emotionally communicative ways, even the tiny panel of Sutherland and Adams as silhouettes at the bottom right of the page. Sutherland’s body lurches forward towards sanctuary (a house in both the movie and the parody) while Adams’ body tips back in both fatigue and relief. At the beginning of his career, Eddie Campbell decided to avoid avant-garde page layouts, to better direct readers’ attention to the gestures of the figures inside the panel rather than to the shapes of the panels themselves; Jaime Hernandez describes panels as transparent “windows,” important only as thresholds through which we see character movement and behavior. Perhaps Drucker’s stacked, stable panel tiers and devotion to caricature and body language inside the “windows” inspired later cartoonists like Campbell and Hernandez and Dave Sim and Drew Friedman and of course current MAD artists like Hermann Mejía and Tom Richmond.

Drucker’s emphasis on body language works because he stages his characters against receding planes of white, gray and black tones. In the first panel, the faces of Brooke Adams and Leonard Nimoy are swathed in a uniform gray tone, except for a slight irregularity under Adams’ eye. In panel six, the profiles of Adams and Sutherland are likewise shaded, except for small white highlights on their chins and noses. Apatoff explains that Drucker experimented with different means to create half-tones:

He went through a long phase with gray felt tip markers (both warm and cool). He also dabbled for a while with gray wash, and with Craftint. In later years he (or more likely an assistant at MAD) used Rubylith overlays for gray screens. But for the most part, it was just plain old-fashioned pen and ink (or brush and ink) on heavyweight paper through the decades.

Drucker may have created the steady grays of panels one and six with markers or screens, while the splotchier backgrounds of panels two, three and four look like ink wash to me. In each instance, however, a light foreground is juxtaposed against a darker background, or vice versa, a contrast that makes Drucker’s caricatures and their gestures pop into the reader’s vision. I chose this Body Snatchers page partially because panels five and seven-through-ten are evidence of Drucker’s ability to create depth and foreground figures through strong contrasts. Panel nine, for example, is remarkable in its density of detail—especially in such a small space—and its use of tones and silhouettes to convey distance and tension in a chase sequence is masterful.

Finally, Drucker’s art partakes in the most venerable MAD tradition of all: the “chicken fat” aesthetic, the stuffing of panels with sight gags and visual digressions pioneered by Harvey Kurtzman and Will Elder (and defined by Elder as the inessential “parts of the strip that gave it more flavor,” as chicken fat gave more flavor to his mother’s soup, “but did very little to advance the storyline”). There’s a hint of chicken-fat density in the Body Snatchers page—mostly because of the tiny Sergio Aragonés horse racing gag squeezed under Drucker’s final four panels--but better examples of Drucker’s personal devotion to chicken fat are elsewhere in the parody. On page two Sutherland visits a restaurant kitchen (just as his character, a Board of Health inspector, does in the film), and Drucker loads his panel with silly details, including a scowling chef, a happy fish hanging from the ceiling by fishing line, a “done” lobster, and a caricature of an Italian chef in the panel’s foreground:

Even stranger chicken fat can be found in other Drucker MAD stories. While browsing through mid-to-late-1970s MADs for this essay, I came across a panel (in Drucker and Dick De Bartolo’s Spy Who Loved Me / “Spy Who Glubbed Me” parody, MAD #199, June 1978), where the main action is upstaged by a bizarre tableau of a munchkin, a dog with a cigar, and an appalled bystander: 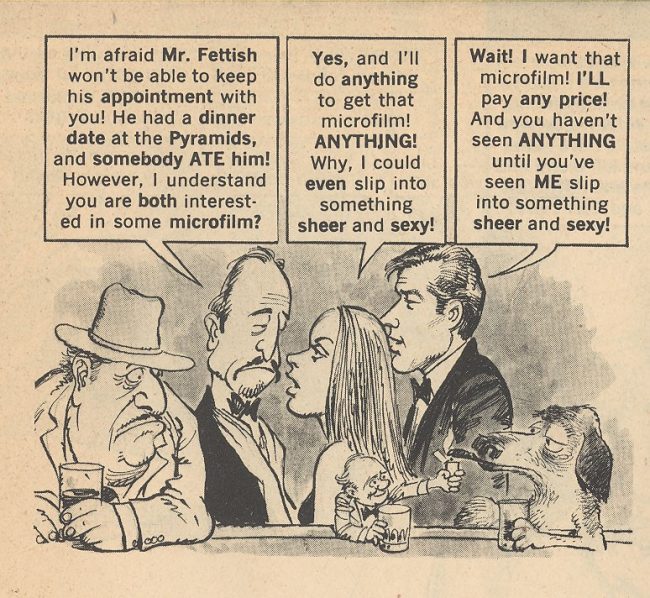 Apatoff notes that in addition to the chicken fat inside the panels, Drucker’s original art teems with drawing that spills out past the panel borders. According to Apatoff, Drucker seemingly “couldn’t stop himself,” couldn’t help but doodle outside the lines, couldn’t help but exult in compulsive mark-making.

MAD editors have historically been about control. Harvey Kurtzman’s breakdowns were so specific and detailed that some of the cartoonists who fleshed out the layouts felt more like by-rote picture-makers than artistic collaborators. The editor that followed Kurtzman, Al Feldstein, was less of a micro-manager, but he assembled each issue of the magazine by repeating artists and “departments”—I wish we’d had the opportunity to see Drucker illustrate a squishy sight-gag written by Don Martin. By the time of “Invasion of the Booty Snatchers,” production procedures were firmly in place: art director John Putnam and production manager Leonard Brenner determined the page layouts, breaking down Stan Hart’s script into typeset word balloons they would place onto art boards to give to Drucker.

Drucker did not hand-letter the word balloons to match the organic quality of his drawing line, and the layouts he followed were dominated by panels that almost always ended on a verbal punchline (“a POD ACHE / “Gee…It hasn’t changed all that much!!”) and scene-to-scene panel transitions that gave him little opportunity to explore decompressed time á la Eisner or Krigstein. (In the context of Drucker’s work, the Body Snatcher page is unusual in its sequentiality: panels two through four take place in the same scene, with action-to-action rather than scene-to-scene transitions, as do the small chase panels at the bottom of the page.) In his appreciation of MAD’s movie parodies in the March/April 2013 issue of Film Comment, Grady Hendrix argues that the Putnam/Brenner/Drucker formula replaced the “layout innovations” of earlier artists (particularly Jack Davis and Wally Wood) with a “house style” that foregrounded Drucker’s “less spectacular gifts.” I disagree with that last phrase—for me, Drucker’s gift at caricature and evocation of spatial depth are plenty spectacular—but Hendrix also notes that Drucker drew a staggering 238 movie parodies during his tenure at MAD. Did Drucker ever get tired of the formula? Did doodling little Italian cooks and dogs with cigars give him an opportunity to both honor his MAD predecessors and inject his personality into the production limitations of the MAD movie lampoon?

According to Wikipedia’s “List of Film Spoofs in MAD,” Drucker drew his final movie parody, “American Gagster” (instead of American Gangster), for MAD #487 (March 2008). I’ve missed him since, and I’m grateful that so much of my childhood and adolescence—the period when I fell in love with film—coincided with the heyday of his career. 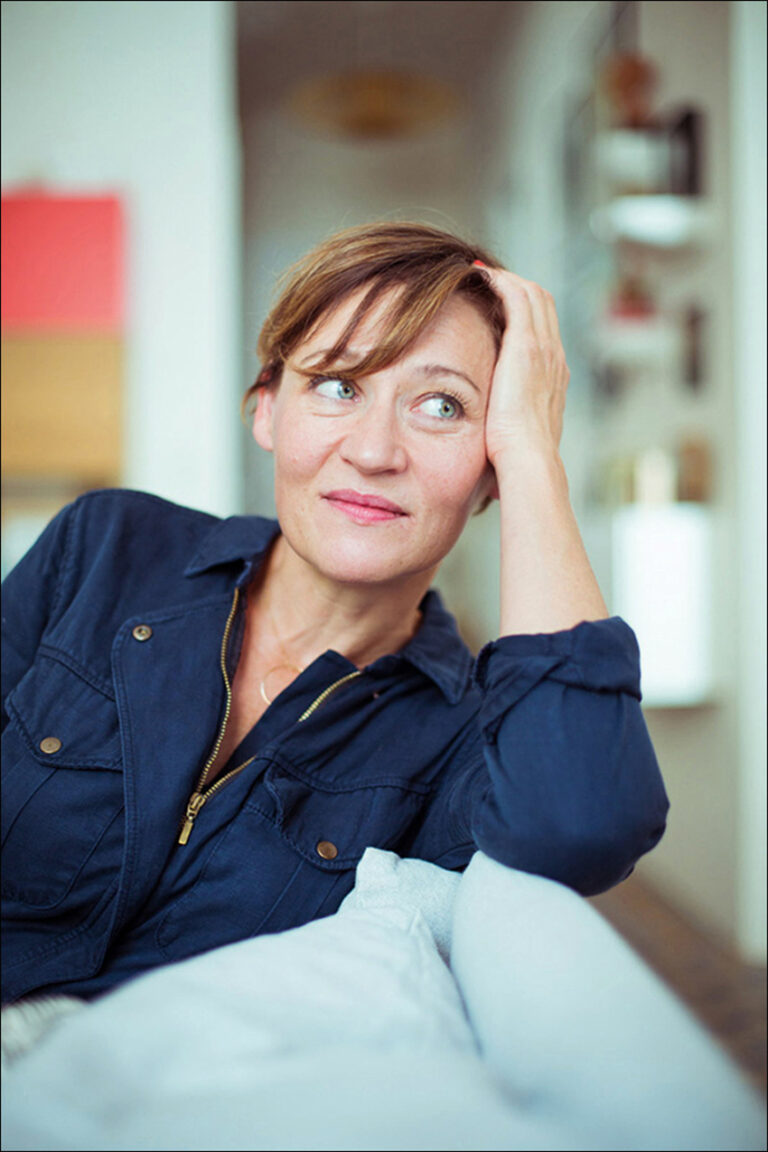 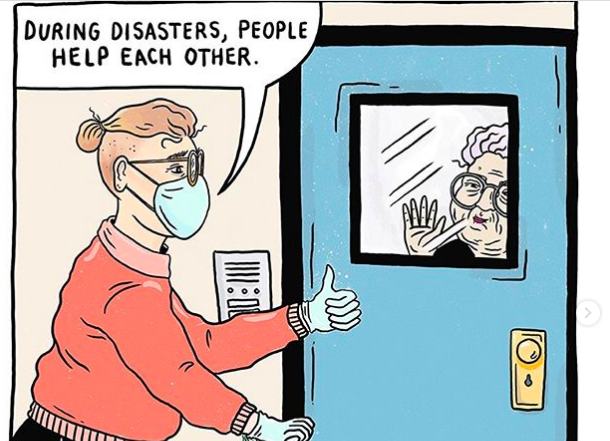