Today on the site, Sloane Leong returns with the latest of her series of interviews with fellow Angoulême residents. This time, she talks to Kathrine Avraam.

You have a very distinct textural style that's all very gestural. How did you develop it?

I always switch from analog to digital and the main reason is precisely in search of good graphics that goes with what I want to tell. The place of the texture thus becomes crucial in this game. Younger, I felt frustrated in front of any tool (charcoals, acrylics, pastels etc) and the idea that there are so many techniques of paintings that I do not know and that  I will never be able to control. Now my goal is to draw the best of all these two worlds, the spontaneity of analog and digital freedom. And then the role of the texture, unlike the line, is not descriptive but rather revealing! Revealing the emotional state to which I push my reader.

H.W. Thurston is here with her review of B. Mure's Terrible Means.

I feel somewhat guilty writing a lukewarm review of Terrible Means, and I’ve been trying to understand why. It is after all a professional, purchase-able comic, so to have an attack of taste or conscience on this front runs a risk of sounding condescending. But different artworks are offered up to the world with different attitudes and those attitudes affect the kind of criticism that feels appropriate. I’d never bust onto someone’s personal Instagram, or fan art blog and complain about how they’re taking pictures of their family and drawing their favorite characters and what about what I want to see, huh? There’s an understanding that those creations are the artist experimenting or expressing themselves, not things that are making a case for how good they are. They were created to be either enjoyed or ignored. By comparison, there are works that clearly have a goal, and invite you to judge them by their success at achieving it. I’d have no guilt about disparaging a given Netflix Original or Star Wars outing, because those things claim to be entertaining, and try to earn the mass-adoration (well, patronage) of their audiences. I might not think that judging those things is particularly worth my time, because trying to convince a major studio that their art is bad is like trying to earn the affection of someone who hates you. But I’d definitely feel allowed.

And AJ Dungo begins his week creating out Cartoonist's Diary.

We closed out last week with Steve Ringgenberg's obituary for the significant portrait painter and comics artist Everett Raymond Kinstler.

Everett Raymond Kinstler, who died on May 26 at the age of 92, occupied a unique position among all comics artists. No other artist went from drawing for the pulps and comic books to painting presidential portraits. And not just one or two, but eight presidents sat for him, including Ronald Reagan, Gerald Ford, Richard Nixon, Jimmy Carter, Bill Clinton, both Bushes and Donald Trump. His paintings of Reagan and Ford are the official White House portraits. In addition to his presidential portraits, Kinstler went on to become the portrait painter of society’s elite, painting more than 1,200 portraits that ranged from depictions of astronauts, to captains of industry, to movie stars like John Wayne, James Cagney, Gene Hackman, Christopher Plummer, Clint Eastwood and Katharine Hepburn. Additionally, he painted such prominent public figures as Lady Bird Johnson, Betty Ford, John D. Rockefeller III, Senator Daniel Patrick Moynihan, Supreme Court Justices Ruth Bader Ginsberg and Harry Blackmun, plus six U.S. governors, four secretaries of state and the presidents of numerous educational institutions, including Harvard, Princeton, Yale, Smith, Wellesley and many others. During his long career, Kinstler painted portraits of more than 50 cabinet officers, more than any other artist. He also turned his hand to painting portraits of authors like Ayn Rand, Arthur Miller, Tennessee Williams and Tom Wolfe.

Drawn to Berlin is Ali Fitzgerald’s first book-length comic. As a drawing instructor at one of Berlin’s bubble shelters during the height of the 2015 European refugee crisis, the social power of images is one of her central concerns. From German typography to caricatures circulated in anti-immigration propaganda to the self-portraits she drew for refugees passing through shelters, Fitzgerald recognizes the potential of images, and more specifically comics, as a force for good or ill everywhere. Her work tells not only her own story, but the stories of a displaced people longing for home. For Fitzgerald, then, the ethical dimension of comics, far from being some abstract philosophical or political question, is of deeply personal concern.

In fact, Fitzgerald records the personal struggle involved in crafting Drawn to Berlin. As a comic journalist, she finds herself torn between the desire to give voice to the voiceless and the fear she may inadvertently colonize already marginalized people by sensationalizing their lives as a “crisis comic.” Near the book’s end, Fitzgerald overtly addressees these worries when she tells an unnamed character, “I just...don’t want to colonize people’s stories,” to which her acquaintance responds, “But this is your story too, isn’t it?” This panel summarize not only a central tension in Drawn to Berlin, but the whole work’s genre-blending approach. Blending categories of graphic memoir, comics journalism, and historical overview, Fitzgerald records her own life alongside the lives of those she seeks to help as well as the life of the city in which they live. For her, none of these stories can be considered in isolation, like a panel in the comics sequence.

And on Friday, Melanie Gillman completed their two-week residency creating our Cartoonist's Diary.

—At the Spectator, Hermione Lee talks to Posy Simmonds.

Starting with Gemma Bovery, her witty update of Flaubert in 1999, her graphic novels came out just as the genre itself was becoming increasingly respected — culminating in the first Man Booker prize longlist nomination for a graphic novel last year (Sabrina, by Nick Drnaso). Simmonds acknowledges how far the genre has come. Women, she says, were ‘accused of muscling in on a scene that was male, particularly the superhero scene in the US, but now there’s a whole generation of women who are completely uninhibited and drawing just as themselves…. Still,’ she grins, ‘people think you’re probably drawing bears in pinnies. You’re often asked, “And do you ever do any proper writing?”’ 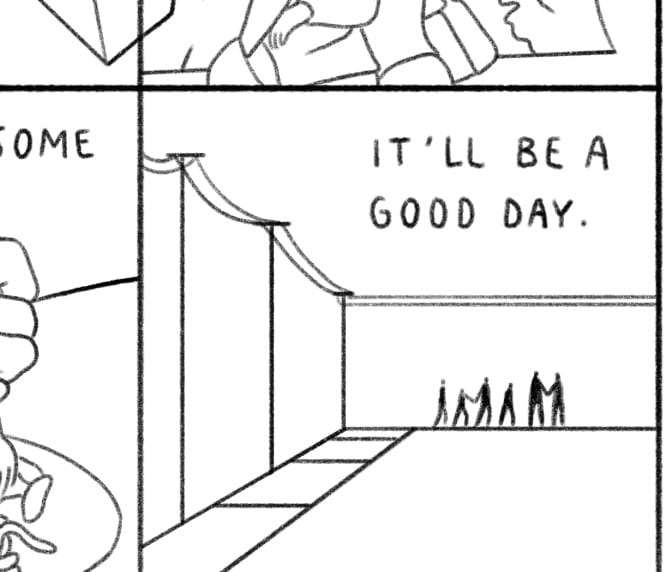 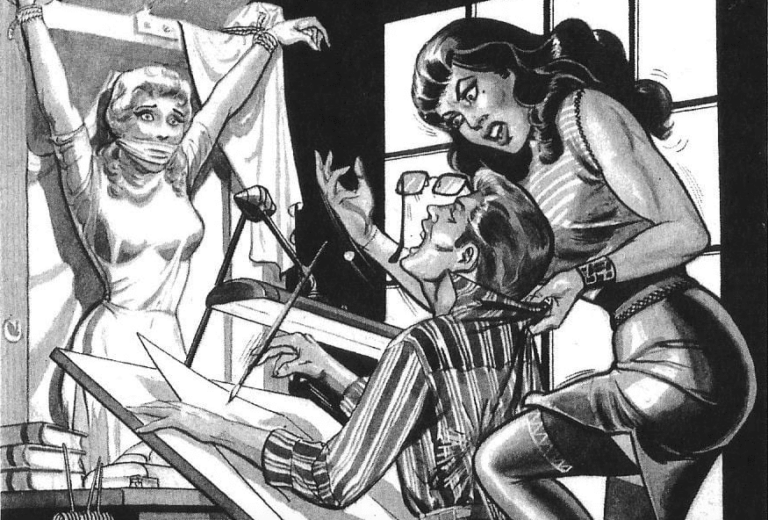