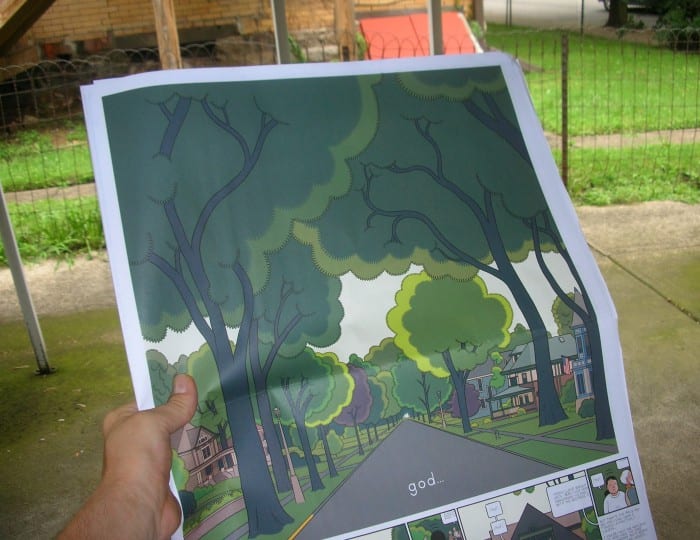 Just wanted to write something about Building Stories. What an astonishing achievement. I feel as though Ware has assembled a new phrasing style. He's doing his thing - it's definitely his voice - yet he is "phrasing" notes and chords in a new way that reminds me of the way, say, Ellington changed over his career. Retaining that "big sound" regardless of the size of the band.

There is something in his "scale jumps" and framing that feels different after all these years. Particularly the large newspaper with the trees on the cover (above). Something shifted for me here - there's often a middle-ground-type framing, so that what happens is the close-ups and long shots are offset. The close-ups with the slightly more realistic features are like landscapes. I'm thinking specifically of the sequence where the protagonist meets Cary outside the church (below): the scale of their faces paired with the scale jumps on the left hand side of the spread. 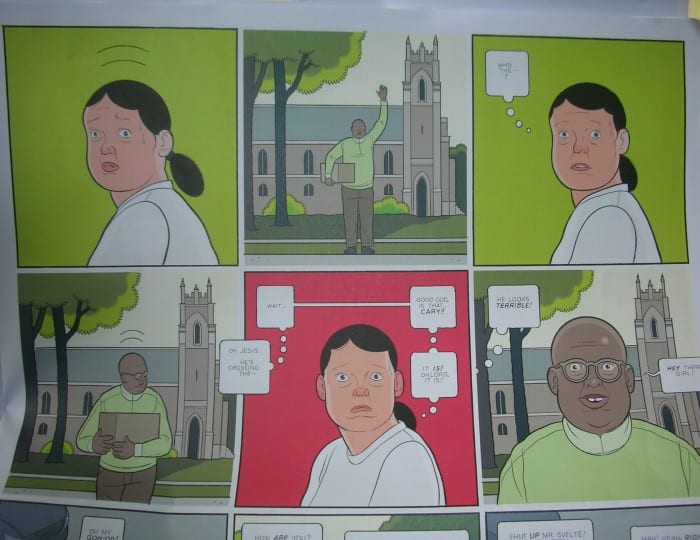 Then on the following spread she (the protagonist) is on the computer, in profile, in a similar scale: 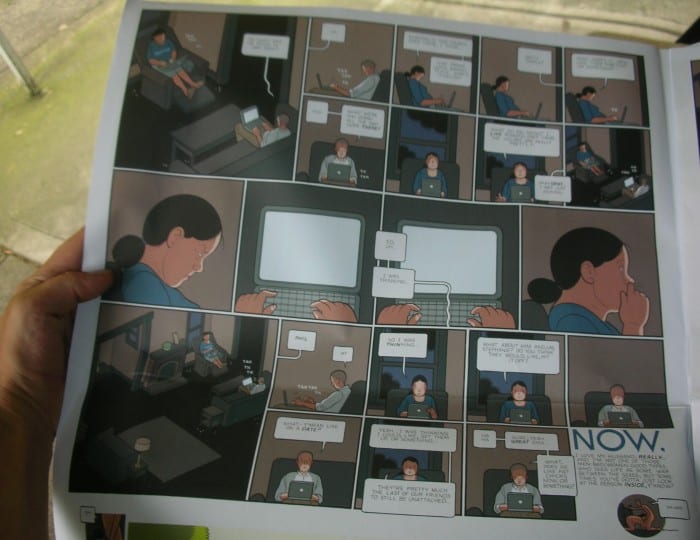 And then it opens up to the spread of the daughter (which is the following spread, below). 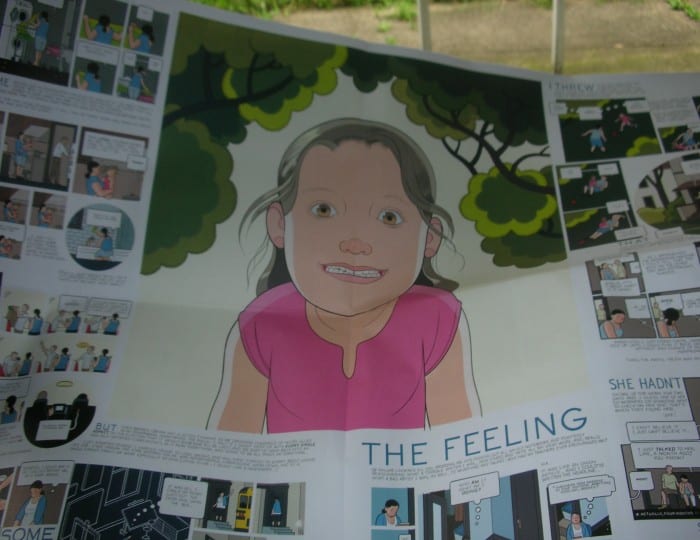 So what happens I think is that Ware is "setting the table" for such a scale jump. It is not jarring - it is tender and conveys precisely the emotional roller coaster mania & antidote that the protagonist is feeling across the sequence, "The feeling of failure lingered all day" writ beneath the daughter's smiling face. I found this very moving.

The landscape and the "set" where all this unfolds also moved me a great deal. Particularly the simple one-two, night-day "portrait" close-up of the family home following the center spread. 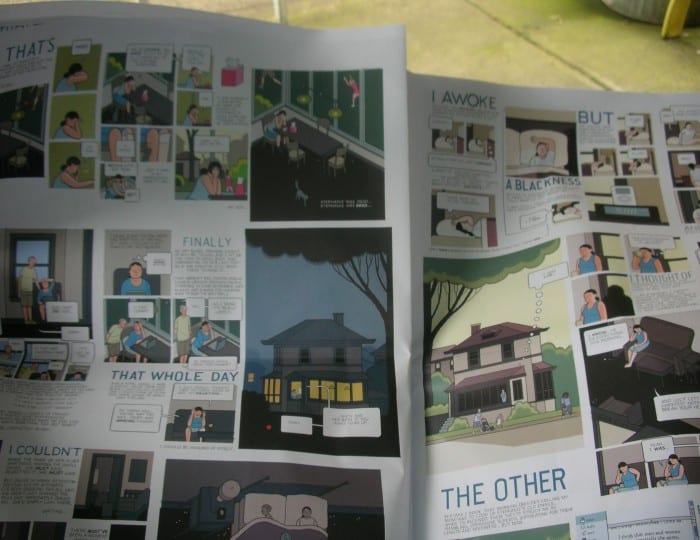 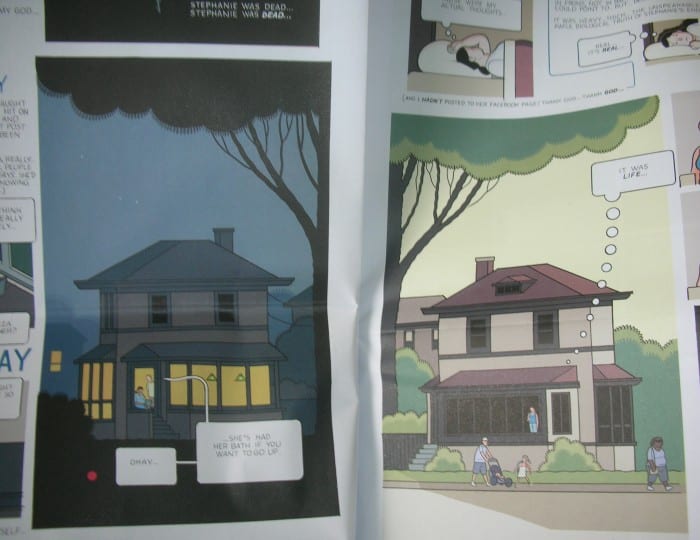 These two panels of the house on each side of the spread (above) are similar in scale to the close-up panels of our hero and Cary a few pages earlier. So I read the houses on both sides of the spread as "portraits" of the family home, night and day.

I feel as though Ware's been making "chord progressions" like this for some twenty years, yet now there is something else going on. Maybe it is the scale of the large paper? So the close-ups have more "detail" and feel more "real" - I dunno. Whatever it is it works. Something I have noticed, in the last decade or so of Ware's work, is that when he pulls in for a close-up the symbolic power of the (usually smaller) face is not diminished when he renders the faces more "realistically." For example, many cartoonists who draw in a symbolically reduced fashion will refrain from either using big close ups at all or will retain only the symbols of the face - dots for eyes, no nostrils - so what happens is that the emotional power of some scenes are, I think, short circuited. When Ware had similar close-ups in Jimmy Corrigan the faces were at times "realistic" yet without the same level of detail or specificity. Again, this may simply be a matter of scale. However, I wanted to say I found this very pleasant & wanted to note how remarkably clear this "reads" to me as a development of Ware's phrasing style.

Lastly, I appreciate the way Ware is using the center of the page and sometimes the spread to focus the eye. Again, this is something that he's been doing forever — it's just that he is expanding his use of it and because of the assembly of Building Stories, the contrasting use of the center in each format really came through. The "all at once" reading of the spread feels more approachable within the framework of the whole. Meaning some issues of Acme start with "all at once" reading or start with "traditional" reading; there have always been different approaches to reading in his work. Yet with the structure of Building Stories I often found myself starting in the center of the spread or page, depending on where my eye took me, and would just go with it instead of stopping myself and starting in the upper left hand corner. Even if I was fast forwarding the story it didn't feel "wrong" like I was reading the last lines of a novel first & spoiling the ending.

One sequence that comes to mind is when our hero is drawing the landscape out her window. 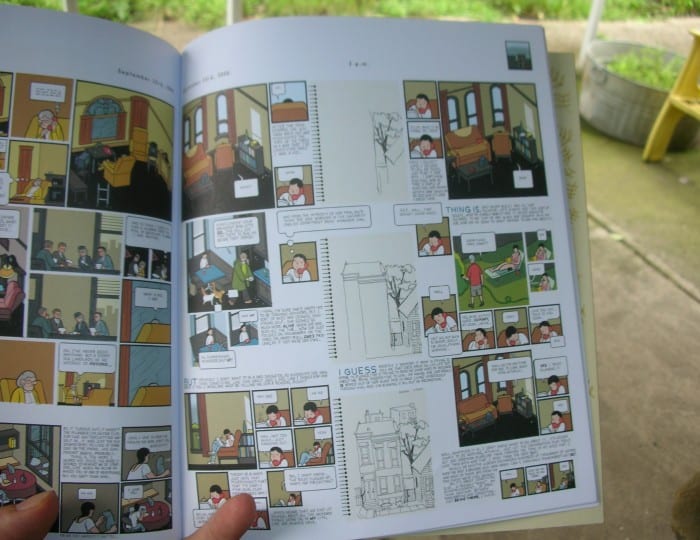 Ware uses the center as a progression of the drawing, and I read it down the left & then up to the top right, and down again like a newspaper column — so I read it "wrong," out of order. I feel like I do this with all comics - I piece it together from my first "all at once" glance. What struck me though about Building Stories was how the collection of pamphlets and papers and books reinforced this "random" or "personal choice" reading style often on the page itself. I guess I'm trying to say that it felt liberating. It felt like the way I remember stories - not necessarily in chronological order, but more like a collection of fragments.

Incidentally, I read the small Branford Bee pamphlet first and the Golden Book last. I hadn't looked at the back cover of the Golden Book until the very end - so to have that image of the demolition of the apartment building as the final image was very powerful. 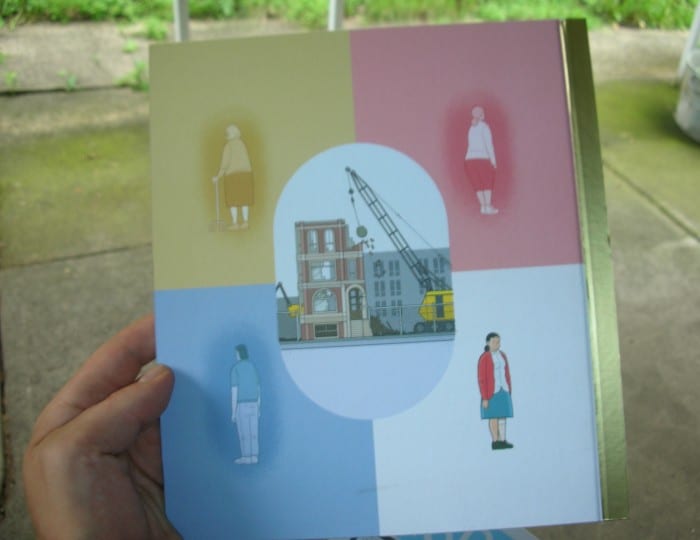 It's a stunning work. A masterpiece of the highest order - like a cathedral - but made by one builder.

I found this note in an earlier draft:

I also wanted to make note of the "Disconnect" pamphlet where I feel similarly about scale jumps. 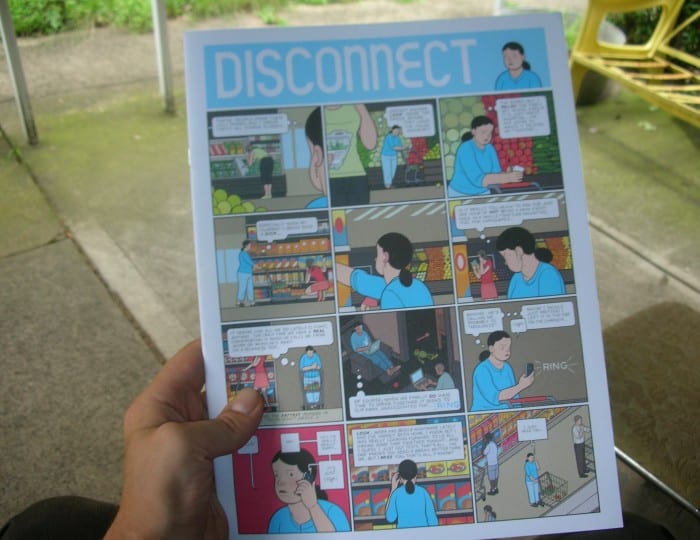 I think incorporating the full-page single images, and doing it at such a scale (like below) was very interesting. 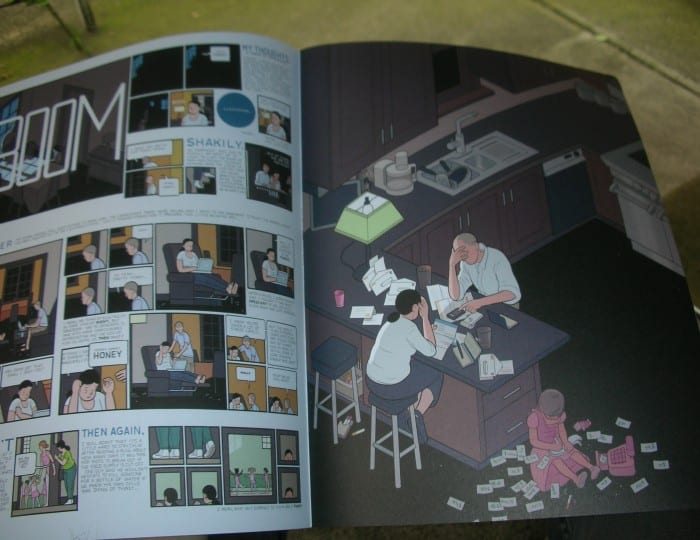 The other thing that really struck me was the framing of our hero in the car in the "Disconnect" pamphlet. I'm referring to the last two spreads. The first image of the car in front of the houses- 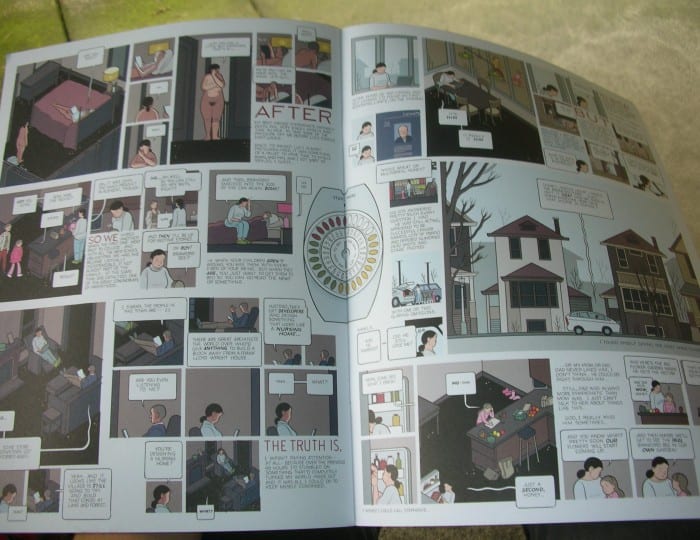 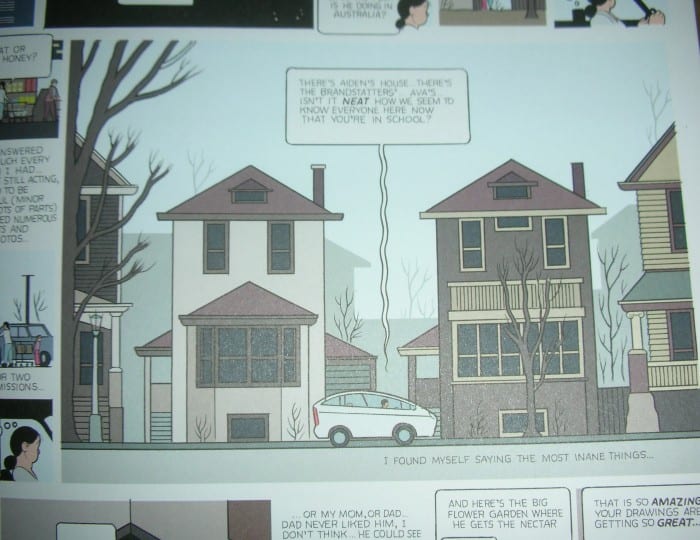 -and then on the next spread (below) Ware holds that depth of field of the street scene and as we turn the page shows a similar scene and the family standing behind the row of cars. 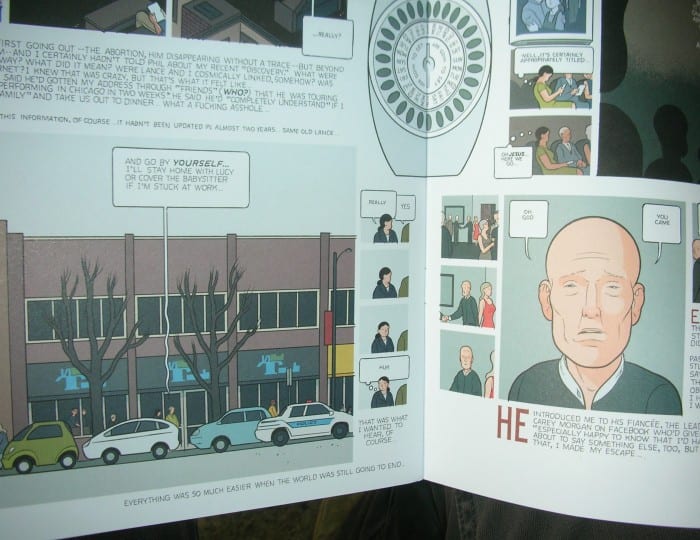 And then my eye goes towards the stage on the opposite side of the spread - the row of cars on the left and the stage on the right - both images being close in scale to each other sets the table for the close up of Lance (big face on right). Also note the shadowed profile in the panel of the stage — this is about the same scale as Lance's face a few panels later, so again Ware sets the table (or the stage) for his scale jumps. 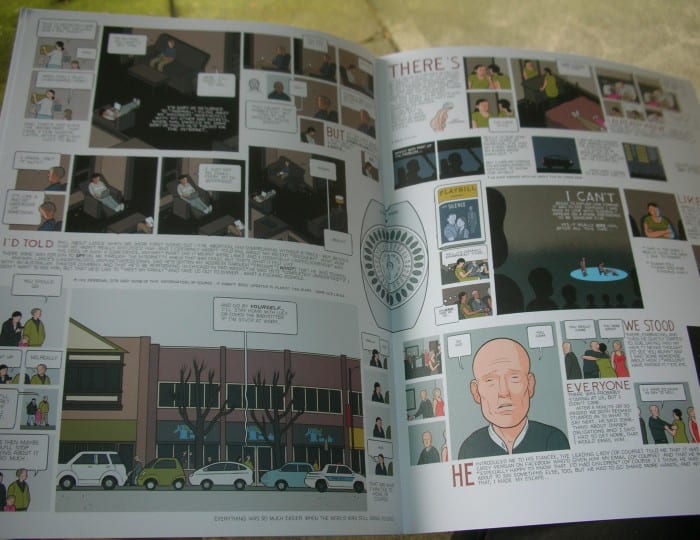 This progression (above) really stuck with me. I think it's a combination of how the scaling works and how it frames certain actions, but again I think there is this other "middle ground" type framing (like the car in front of the houses/shops) that Ware is using exceptionally well. I know, again, that Ware's been using "middle ground" framing forever - but as a longtime reader I feel like his decisions of how and where he uses it within a progression is expanding.

(Oh and his drawings of cars are super! Ware is one of the few cartoonists who doesn't avoid drawing cars.) 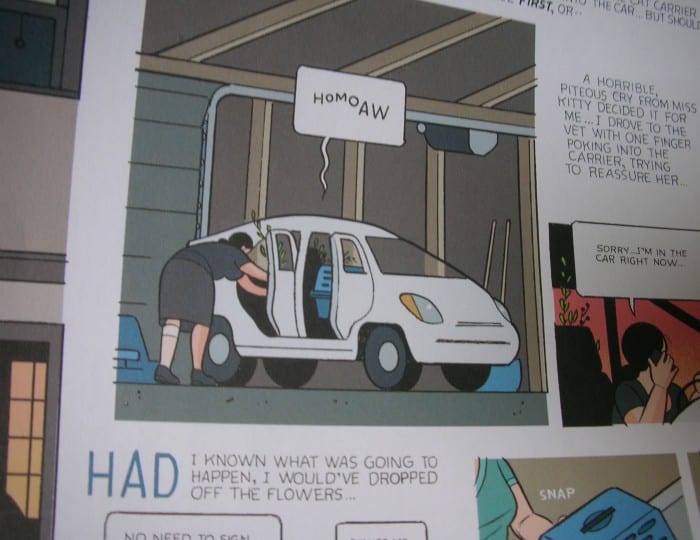 Over and out. Thanks. 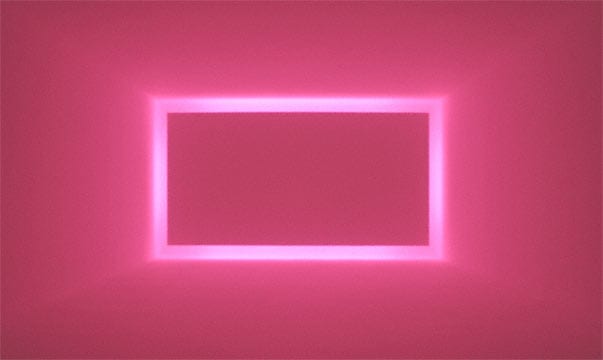 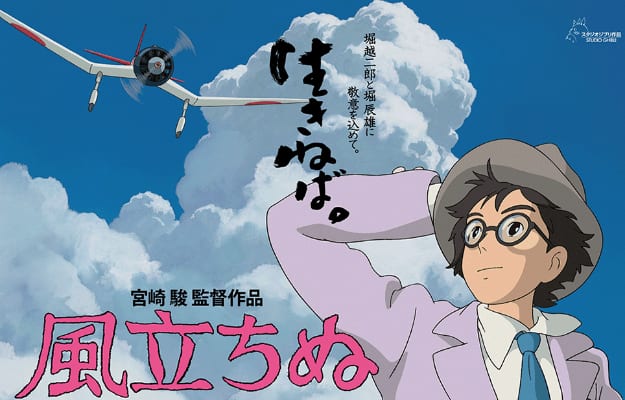 The Wind That Shakes the Blogosphere