Hey there, hope all of you had a great week - especially the anonymous person who accused me on Twitter of publishing CIA propaganda and then deleted their tweet, having presumably read past the title of Lane Yates' piece on Tom King. Buddy, the podcast I'm on doesn't make enough money for that.

This week we have a lot of good stuff coming up, and we're kicking it off with Ian Thomas, who's conducted quite a few interviews for us in the past year or so, among other pieces - this time, he's speaking with scholars Brannon Costello and Brian Cremins, who've edited The Other 1980s, a new LSU Press collection of essays on topics from '80s comic books -- some of them very popular at that time -- which aren't generally the stuff of academic study. I was particularly struck by a comment Costello makes about how advantageous it becomes when a particular magazine has a readily searchable database of contents; this is the sort of thing you don't always think of in terms of serving posterity (if indeed that is something you think about at all), but as years pass and the tastes of larger groups drift apart online, it becomes especially useful to have a reliable source of data. When ComicBookDB dot com was bought out by ComicBook dot com and shut down in 2019, a huge amount of issue-by-issue creator data for late 20th century self-published and small-press comics vanished from ready access. A quiet calamity for maniacs such as myself.

Anyway, much more in the interview, and much more to come this week!

What was the last Tom King-written comic I read? My handler keeps asking.

I think it was this, from 2019's issue #9 of Superman Giant, which was one of those thick collections of mostly reprints that DC released exclusively to Walmart stores near the checkout aisles. King and penciller Andy Kubert did original 12-page stories in those, which were then collected on their own as two-in-one comic books for the direct market under the title Superman: Up in the Sky. At least in my region of online, the most-discussed of these shorts was an episode in which Superman envisions a series of awful deaths for Lois Lane -- which, though I lack a comprehensive grasp, seems to feed a recurring theme of troubled men and the intensity of their relationships with women in King's writing -- but this one has Superman in a race with the Flash that is extensively narrated by a little girl chained up elsewhere in the serial. There is no great sensation of speed to this contest - Kubert and inker Sandra Hope instead pose the characters in full-page images which, combined with the often dozen-plus captions per page, creates a sort of tableau vivant type of presentation; a Hypothesis of the Stolen Painting that is about how Superman is the mightiest and etc.

Of course, I realize that King is probably writing in this style to introduce Walmart shoppers to Superman and send them away knowledgably into reprints of Jeph Loeb/Michael Turner Supergirl comics in which somebody has retouched all of the panty flashes, but this nonetheless strikes me as part of what I will call the 'explicative tendency' in superhero comics. This is when the writer collapses the distance between their own work and the reader's interpretive role, assessing them as to the writer's 'take' on the character in plain language above the action of the story. We are all familiar with how, for example, Grant Morrison's run on various Batman-related comics served as a summation of Batman history, in which everything was ostensibly real in continuity terms, but I am thinking more of one character explaining to another, or the reader, why a character is cool, or what the societal metaphor active in a certain character might be. Geoff Johns has taken steps in this direction throughout the 21st century, and certainly one can imagine Tom King as a participant in this tradition, recalling all those pages from Heroes in Crisis where superhero characters face the reader and therapeutically detail their struggles; which are really interpretations of what these characters means. But I haven't read that comic, I just know it from social media.

I have, however, read every issue of the most conceptually advanced recent comic of the explicative tendency: The Other History of the DC Universe, a five-issue miniseries which wrapped not long ago. The writer is John Ridley, who won an Academy Award for his screenplay for 12 Years a Slave, but wrote a number of comics prior to that (among many other pursuits) - I recall some discussion surrounding his 2006 Wildstorm superhero project The American Way (artists Georges Jeanty & Karl Story) back when that was new. But The Other History of the DC Universe is not a traditional comic; it is more a heavily illustrated series of prose stories, where the illustrations are sometimes paneled and sequential, and the text is sometimes in caption boxes. And, each issue is narrated by one or more superhero characters, none of them white, who describe their personal histories and their perspectives on various DC storylines.

This is interesting to me, because it is as much a critical essay series as it is a superhero comic. If contemporary superhero comics are sometimes derided as official fanfiction, this is a particular type of critical fanfiction (and, to be clear, I like fanfiction) that seeks to comment on the work by giving primacy to subtextual or peripheral character traits - or, simply the traits of characters made peripheral by the assumptions of salability and audience taste. The best issue is #2, a seriocomic recounting of the lives of Teen Titans supporting character Mal Duncan -- holder of various and sundry superhero titles like Hornblower and the (new) Guardian -- and his wife, Karen Beecher-Duncan, the Titans and Doom Patrol character Bumblebee. Like Morrison's Batman run, the concept of The Other History of the DC Universe is that most events in DC comics are 'real' (which places the arrival of Superman in the 1970s, to keep things on a plausible timeline), and Ridley uses this idea of continuity to tease out hidden character implications. Because Mal Duncan is an 'important' character to one creative team in 1970, and no longer so important to the creative team behind, say, the wedding of Donna Troy, Ridley can present the character's diminished presence in the wedding scene as an illustration of the callousness of the Titans characters, and the tokenized nature of Black characters in media endeavors such as superhero comic books. Arguments among fans about who is the first Black DC superhero become arguments among the characters in the comic, with charged emotions that serve to analogize the desire for representation in popular entertainment. Plus, it's funny: where Titans continuity doesn't actually make sense, Ridley inserts contradictory and unreliable narrators, and placing all of these confrontations in a row does lead one to the conclusion that the Teen Titans are honestly a bunch of assholes.

And that is part of the narrative: dealing with all these assholes. The ambivalence of a publisher like DC toward committing to Black superheroes becomes an ambivalence on the part of the characters toward being a superhero; a model minority.

It does seem like the art in this series is incidental, so intense is the focus on narration. The drawing is done by two Italian artists, Giuseppe Camuncoli & Andrea Cucchi -- Camuncoli, an experienced superhero artist, does layouts for Cucchi to finish -- as a series of monumental or metaphorical splashes or collage-type images, sometimes mimicking famous moments in DC superhero comics, and adopting to my eye the very unaffected look of model sheet or merchandising art, but just a little too ink-shadowed and vulnerable, which is fitting for this project: a sort of official criticism. Comics criticism made flesh by its assumption into the comics world. But there are limitations to this.

A few days ago, I read a really excellent critique of issue #3 written by Kelly Kanayama. That issue focuses on the character of Katana, a Japanese woman introduced by Mike W. Barr & Jim Aparo in The Brave and the Bold in the early 1980s. This issue got passed around on social medial a little upon release, because it characterized, in the official capacity of a DC comic, the 'relationship' between Slade Wilson, Deathstroke, and 15-year old Tara Markov, Terra, in the New Teen Titans era as an act of rape by a pedophilic trafficker. This is a broad-view criticism. But Kanayama goes deeper, and asks after the missing particularities of Ridley's story, which does not particularly address the racialized misogyny that follows Asian women, and does not question the details of Katana's character. If these characters exist in a political reality, then why is a twentysomething Japanese woman in the 1980s wearing a costume bearing the imperial rising sun, with no apparent concordant ideology? Why are all the Japanese characters fighting each other with swords in Shōwa 58? This is because, in Kanayama's estimation, the book assents to depictions of Japanese characters as "collections of tropes and stereotypes" rather than people.

I agree with Kanayama's criticisms, and I think it is easy to run into these problems when writing critically in an 'official' capacity such as Ridley does. When working with superhero characters, an element of fiat is presupposed: that you will, to some extent, meet the superheroes on their (i.e. the corporate owner's) terms. So, in a series that asks you consider the superhero continuity to be 'real' as a platform for commentary, there is a degree of distance you must maintain to respect this artificial realism. When Black Lightning muses on the villains of Suicide Slum, we see a character with shuriken decorating his karate gi - because that is the character (whom I don’t think even had an official name in the original comics), and that is how he dresses. When Karen Beecher-Duncan comments in issue #2 that "For an inner city in Metropolis, Hell's Corner had a surprisingly high number of white pride gangs," Ridley is poking at the pieties of how villains are depicted in these comics, but also acknowledging the necessarily reality of such in the comic book world. Kanayama reminds us that what is accepted as 'real' in these parameters, however, is not an unmeaningful choice, as much as the weight of the superhero world urges us to embrace its fake objectivity. Through the explicative tendency, you are always saying something.

And I will say more to you next week, unless, alas, I die. 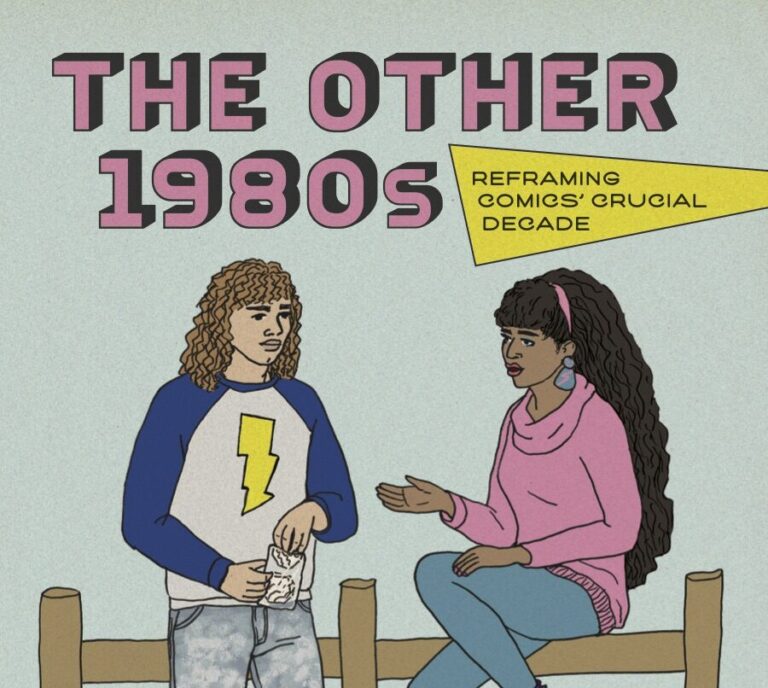 As If By Chisel: Barry Windsor-Smith’s Monsters