This review by Ron Evry was originally published in The Comics Journal #242 (April 2002).

“Art is not an occupation. Art is not a fate. Art is love.” — Yvan Goll

The original publication of Jason Lutes’ Berlin was a series of eight comic books published over a four-year period and has since been repackaged in this graphic-novel format. While a convenient read, the 209-page book is missing something found only in the original comics. If one takes any four issues, flips each of them over to the back cover, and sets them in a pinwheel arrangement with each other, a swastika appears: hidden, yet overwhelming. In the eight chapters covering that many months in the lives of the characters from September 1928 until May Day 1929, the specter of Nazism looms large as well, and the swastikas remain hidden. Lutes’ depictions of brown-shirted National Socialists usually feature their black armbands askew, so the symbol is not visible, but there have been panels showing a blank circle on armbands and flags as well. 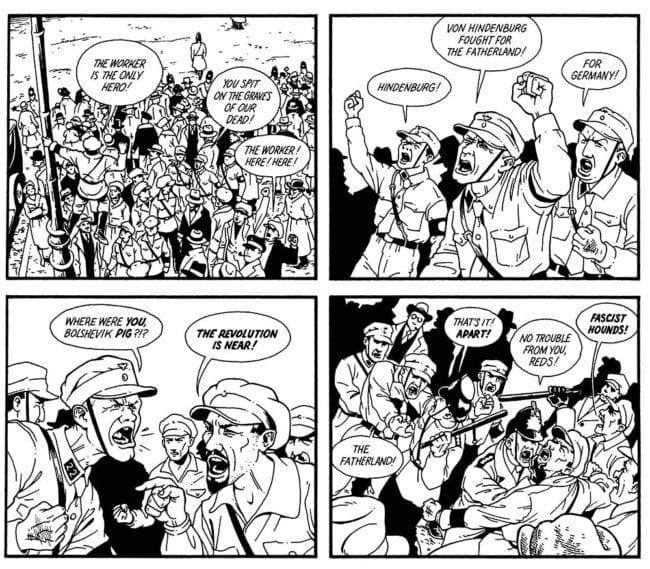 Lutes himself has informed the Journal that this was done for artistic reasons, and not particularly to enable Berlin to be sold in Germany, where depictions of swastikas are forbidden (this turns out to be fortuitous since the graphic novel is being distributed in Europe now). Lutes also stated that quite a few people were sure they saw that there were swastikas all over, testifying to the power of suggestion in a visual medium. The absence of the symbol from the comic may be a symbolic act in itself. The myriad assortment of characters depicted living in Berlin during the late 1920s were aware of the Nazis, but generally considered them to be just another political faction among many hovering in the background. Yet the reader knows the terrible future awaiting them all, overwhelming every doomed action they take.

The history of the Weimar Republic is one of the more tragic events of the 20th century, not only because of what replaced it but because it appeared to be, for a short while, a golden era for all of the arts and sciences. In 1920, eight urban and 59 rural districts were united as “Greater Berlin,” with a population of over 3 million people. In the wake of the revolution that overthrew the Kaiser and ended World War I, a mad onrush of new intellectual and political ideas were let loose. The artistic freedom of the Weimar Republic attracted creative people from across Europe to Berlin, and the artistic movements that competed with each other there were as plentiful as the political movements struggling for supremacy.

Perhaps the most significant artistic movement in Germany at the time was the New Objectivity (“Neue Sachlich-keit”), the movement that integrated the exciting wonders of modern technology with art, music and literature, and was heavily influenced by American Jazz and culture. This movement plays an important part in the lives of the young artists Lutes shows in the story.

A typical example of New Objectivity is the 1917 poem “S.O.S.” by German-French author Yvan Goll:

Across the oceans I receive

The soundless summons of your soul.

Birds write it in the zenith,

Rain taps it out in Morse on my window,

In the park trees whisper it ...

I abandon all business,

Absorbing the styles and techniques of the Dadaists, the French developed Surrealism but the Germans, perhaps attempting to cast off their reputation as straight-laced followers of strict rules, advanced the Expressionist movement.

The flowering of creativity in Berlin stood in stark contrast to the largest tenement population in the world, and constant street battles between various political factions were a matter of course. In Berlin’s first chapter, the journalist Kurt Severing describes the aspects of the city to newly arriving art student Marthe Muller. “Communists, socialists, nationalists, democrats, republicans, criminals, beggars, thieves and everything in between. All mixed up together —” he tells her. “Of course, that means there’s plenty for a new arrival to be excited about. It is, as so many people are fond of saying, second only to Paris as the cultural center of Europe.”

So, with the dual perspectives of the intellectual journalist Severing attempting to report political life without becoming part of it, and the art student Muller, who likewise tries to observe the cultural scene without joining the movements around her, the story appears to have disinterested observers (at least for the time being). 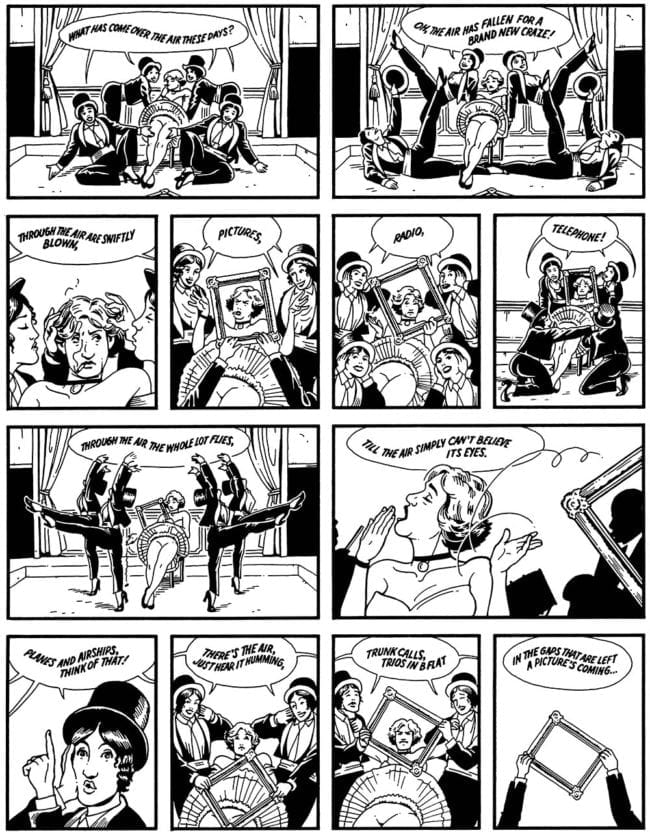 The comic’s complex tale involves a number of characters whose lives intertwine with each other. To the reader, doom hangs over all of them, first the deadly economic crisis of 1929-1933, then the political crisis that culminated in the rise of the Nazis. Besides Muller and Severing, the characters include assorted art students, various journalists and writers, David Schwartz, a radical Jewish youngster who admires Houdini, Gudrun Braun, a housewife caught up in the Communist movement and her estranged husband, likewise involved with the Nazis, and dozens of others weaving in and out of each other’s lives. As the graphic novel heads for its climax on May Day, 1929, Gudrun Braun’s role in it becomes crucial.

What may be difficult for today’s reader to understand is that democracy had a much different meaning to Europeans in the early 20th century than it did to Americans either then or now. Most Germans of the post-World War I era thought of self-determination as a temporary process — that once the people had chosen their fate, then it would be a final decision. In a key frame from chapter four, a teacher relates the meaning of the German revolution of 1918 to her class. After instructing the class that in the German republic all privileges of birth and rank were abolished, she explains, “And we now have the power to decide our own fate.”

This, then, is what the Communists and National Socialists fought in the streets and ballot boxes for: finality. It is absolutely fascinating to note that while the Social Democrats maintained control of the Reichstag (German Parliament) during virtually all of the Weimar years, both the Communists and National Socialists had significant (and generally equal) minority representation during that time as well. It was through bullying, secret deals and political manipulation that Hitler came to power and, with a broad sweep, eliminated opposition and created a reign of terror for Jews, Communists, pacifists and intellectuals virtually overnight in 1933. We know the characters in Berlin are headed for this fate and are generally unaware of its possibility.

The telling of the tale would be slow enough if this were a monthly comic book. Lutes’ publishing schedule of less than two a year has drawn it out to an agonizing crawl. Of course, readers who are patient enough to wait for each issue are treated to a visual feast. Lutes’ research is impeccably accurate and his drawing style is detailed beyond almost anything anyone has ever done in comics. A tantalizing few bits of Lutes’ reference and pencil sketches appear on his publisher’s website. Many of the panels are worthy of study for hours at a time. Unlike too many of today’s comic artists, Lutes is not afraid to tackle drawing crowds. One such scene features a small panel with hundreds of people, with over 40 of them in the foreground drawn in detail. Their faces and clothing are each distinct and accurate for the period.

Lutes’ inking style generally uses a uniform, featherless line with occasional broad-brush strokes, and solid blacks for light and shading effects. Activity is often broken down into tiny details, and actions of a second or two can take many panels to relate. The effect of it all comes across as a newsreel — if someone like Jim Jarmusch had directed newsreels.

Severing comments at the end of chapter three on the impact of writing. He likens the printed word either as stones thrown in a river causing little ripples or purposefully placed among others as a foundation for the city. Berlin: City of Stones could easily fit into either category in its possible impact on today’s world. It is possible to see strains of intolerance and dictatorship seeping into society by feeding on people’s fears. We need more books like this to warn us against the easy, “final” solutions.

It seems a shame that an artist such as Jason Lutes cannot sell enough copies of this masterpiece to make producing it his full-time profession. It is obviously a life’s work, and hopefully will be enough of a commercial success for him to produce it for many more issues. The eighth issue of the comic book came out in December of 2000, and there hasn’t been another new one since. He has drawn an Ed Brubaker-written comic book called The Fall, also published by D&Q, which is diverting and intelligently done, but it isn’t Berlin. There are a projected 400 more pages to go in the series. If readers have to wait eight or nine more years to get them, then that is testimony to the fact that something is terribly wrong with the comic industry and needs fixing. 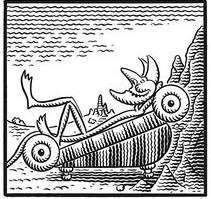 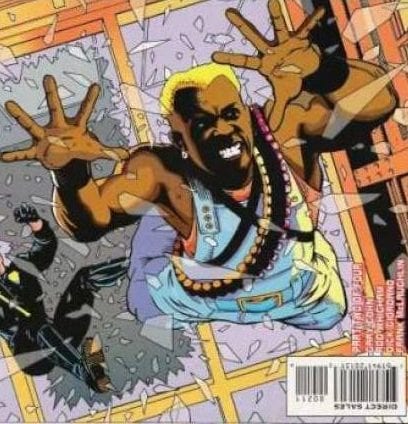