In the 2000s, webcartoonists struggled to be treated with the level of respect and critical recognition given to print cartoonists, which is the saddest sentence I’ve ever written. For many creators and fans, this involved a push to include webcomics in comics industry awards. There were also efforts to create an awards system specifically for webcomics, most notably the Web Cartoonists’ Choice Awards, which ran from 2001 to 2008.

Nowadays, of course, the struggle is over and webcomics are respected by all. Although they still lack their own industry awards, most or all major comics awards now include a webcomics or digital comics category. Some have been recognizing webcomics for well over a decade. That can mean only one thing: it’s time to start nitpicking and judging them. How successful have webcomics awards been at singling out the best in webcomics?

Only one reliable standard exists to gauge such a nebulous measure: namely, the personal opinion of me, Shaenon K. Garrity. Looking over the history of each award, I considered the following:

—Are the winners good comics? Do they stand up against the best work in cartooning?

—Are the winners good webcomics? Do they take advantage of the Web as a medium? Not every webcomic needs to be McCloudian digital experiment, but some level of engagement with the Internet in terms of Web-friendly format, publication history, cultivation of an online audience, interactivity, etc. is nice to see.

—Does the award reflect the variety of genres, styles, and subject matter out there? Because if it’s all Cap/Bucky fancomics I am going to give you a very stern look, award.

—Does the award recognize different nominees each year? Sure, sometimes the best comic of 2010 is also the best comic of 2011, but seeking out new material is a sign of a robust award. And there are enough webcomics—tens or even hundreds of thousands, at least six of which are not about My Little Ponies having sex—that there’s no excuse for awards to keep going back to the same well.

With that in mind, let’s see how the major U.S. comics awards have been serving webcomics. 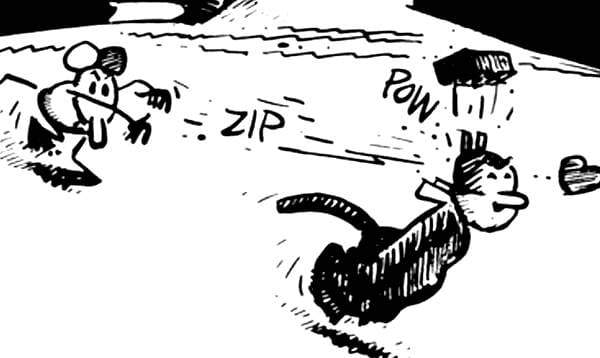 The biggest little comics award got into webcomics early, introducing its Outstanding Online Comic category way back in 2001. The Ignatz Awards were cancelled that year (along with SPX, the convention where final voting takes place) due to September 11, but the nominees included pioneering digital classics like Demian5’s wordless sidescroller When I Am King and Scott McCloud’s infinite-canvas Zot story “Hearts and Minds”.

Since then the Ignatzes have maintained a solid tradition of recognizing work that represents the best of the webcomics world, but with an indie/alternative sensitivity that plays at SPX. Alt-webcomics legend Cat Garza won in 2009 for Year of the Rat, history-nerd superstar Kate Beaton in 2011 for Hark! A Vagrant. Many of the nominees from early years—Derek Kirk Kim, Jesse Reklaw, Kazu Kibuishi, Joey Sayers—have gone on to major acclaim in indie comics and graphic novels.

In general, the Ignatzes have avoided the pitfall of turning the webcomics category into a dumping ground for minor online projects by major print creators. The works by big-name creators (well, big by indie standards) that get nominated for Outstanding Online Comic are, as a general rule, outstanding webcomics in their own right: ambitious projects like Tom Hart’s early-2000s Hutch Owen webcomic and Gabrielle Bell’s ongoing online diary comics.

The Ignatzes do, however, have a habit of nominating and awarding the same work over and over. James Kochalka’s American Elf won two years back-to-back, as did Nicholas Gurewitch’s Perry Bible Fellowship and Chris Onstad’s Achewood. This year’s list of nominees includes two previous winners, Jillian Tamaki’s SuperMutant Magic Academy and Gabrielle Bell’s diary comics. They’re all spectacular comics more than deserving of multiple awards, but considering the breadth of webcomics as a category, SPX attendees could stand to branch out a little. That said, you’re more likely to find unexpected gems in the Ignatz nominations than anywhere else. This year, the standout new find may be Bird Boy by Annie Szabla, a fantasy adventure in a First Nations-inspired setting. 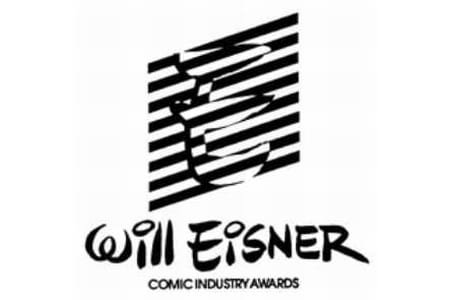 Then things started to get funky. In 2007, beloved and critically acclaimed nominees like Jason Little’s Bee, Ryan Armand’s Minus (man, I loved Minus), and Phil and Kaja Foglio’s Girl Genius lost to “The Big-Sleep”, a 12-page Sam and Max webcomic by Steve Purcell. I stand second to no one in my admiration for Steve Purcell, one of those artists who started at a scary high level of craft and just keeps getting better beyond the point that should be humanly possible. But the Sam and Max webcomic was a short-lived, unfinished side project. Soon after, Purcell abandoned webcomics to, you know, make Brave and stuff.

Since then, the Digital Comic Eisner has frequently valued work by big-name print or mass-media creators, regardless of quality or scope, over comics by creators working primarily on the Web. In a 2012 editorial for Comics Alliance, Lauren Davis wrote, “Sometimes the Eisner committee honors digital comics that I’d hesitate to call webcomics at all.”

More recently, the Eisners refined the guidelines for Best Digital Comic to include only long-form webcomics, making strips like PvP no longer eligible. This didn’t stop Matthew Inman’s The Oatmeal, a gag comic in varying formats (Oatmeal “comics” are often illustrated top-ten lists or infographics), from garnering a nomination this year, raising the question of what defines a “long-form” or “short-form” webcomic.

Davis and others have suggested that the Digital Comic award split into two awards, for long-form and short-form, to honor a wider scope of webcomics. I suppose I should support this idea if only out of enlightened self-interest, since I’m a webstripper. However, I cannot in good conscience recommend adding another category to the Eisner Awards. The 2014 awards already comprise a butt-killing thirty categories, including three awards for children’s comics, two for international comics, three for reprint projects, one for humor, one for adaptations, and a nonfiction award they refuse to call “Nonfiction” just to get on my nerves.

…It’s “Best Reality-Based Work.” This bothers me to an irrational degree. We have a word for work based on reality! It’s common and widely understood! You don’t need to coin an awkward new term that makes the nominees sound like a comics version of reality television, although to be honest I would read a RuPaul’s Drag Race comic book, and so would you.

Ahem. The point is, adding a second webcomics category could well cause the Eisner Awards to collapse into a black hole, dragging the good city of San Diego past an event horizon composed of supercompacted cosplayers and Game of Thrones collectible figurines, so let’s just try to do a better job with the award we’ve got. 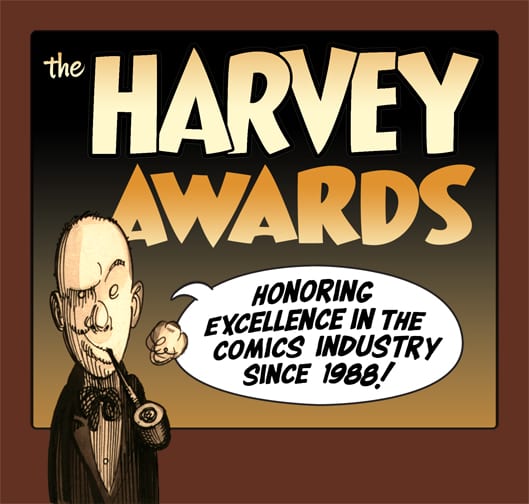 The Harvey Awards, voted on by a small pool of pros and easily swayed by a push from one publisher or influential creator, frequently get weird. The WTF moments are legendary. Remember the year a NASCAR comic book was nominated? Remember when Diary of a Wimpy Kid—a great children’s series, but one illustrated entirely with digitally-drawn stick figures—was nominated for Best Inking? Wait, that was the same year.  Christ, Harvey Awards.

That said, the Harvey tends to fall into the same trap as the Ignatzes, nominating and awarding the same work repeatedly. The Perry Bible Fellowship and Hark! A Vagrant have each won twice—which is a lot considering that there have only been eight On-Line Comics awards. The rogues’ gallery of pros and semi-pros that votes in the Harveys could stand to look further afield. Still, no NASCAR comics to date. 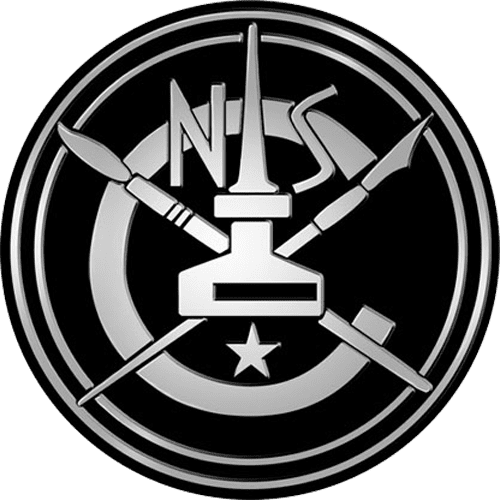 The National Cartoonists Society is an old boys’ club in the classical sense. Founded as a place for male newspaper cartoonists to drink, cuss, and smoke, it now allows women and disallows smoking except by members wearing Mad Men suits and hats while passing Bil Keane’s pipe around (a thing that happened and I saw it) but otherwise hasn’t changed much. It’s no surprise that, of all the major comics awards, the NCS’s Reuben Awards took the longest to recognize webcomics, only adding its Online Comics category in 2011. The Reubens have long struggled when trying to recognize work from outside the NCS’s core membership of newspaper cartoonists and freelance illustrators, often making the animation, comic book, and graphic novel nominations a bit of a crapshoot.

But the NCS has made up for its lateness to the webcomics party by honoring a wide range of work from some of the best creators online. Starting in its second year, the Online Comics category split into Long Form and Short Form, allowing the Reuben committees (both nominees and winners are decided by the members of individual NCS chapters) to recognize a greater variety of webcomics. This year’s nominees include Jenn Manley Lee’s sweeping sci-fi epic Dicebox, Dylan Meconis’s gorgeous historical fantasy Family Man, and Ryan Pagelow’s surreal wordless strip Buni.

Which is not to say the NCS doesn’t have its biases. This year’s Short Form nominees include Mike Twohy’s online New Yorker cartoons. Twohy is a New Yorker stalwart and one of the great practitioners of classic magazine cartooning, but posting New Yorker cartoons online doesn’t make them webcomics. Or does it? Can Garfield win Best Online Comic because it’s available on GoComics? The more print creators and publishers move online, the more confusing this whole “webcomics” thing gets.

Although technically not a webcomics award, the Best Graphic Story category of the Hugos, one of the two premier industry awards for science fiction (the other, the Nebulas, has no comics award), has been dominated by webcomics since its introduction in 2009. So far it’s been won three times by Phil and Kaja Foglio’s steampunk juggernaut Girl Genius and once by Ursula Vernon’s offbeat wombat-centric fantasy Digger. Only last year did the sleek rocket-ship trophy go to a comic that doesn’t run primarily online: the breakout Image hit Saga, by Brian K. Vaughan and Fiona Staples. Howard Tayler’s long-running webstrip Schlock Mercenary is the Susan Lucci of the category, nominated in every one of the award’s first five years. (It’s not nominated this year only because Taylor didn’t produce work in 2013 that meets the eligibility requirements.)

The Hugos are chosen by a fairly small and consistent group of science-fiction fans (both the nominees and the final winners are voted on by people with memberships to Worldcon, SF’s oldest convention and a nexus of fan activity and activism), so it’s no great surprise to see many of the same fan-favorite works get nominated year after year. The Foglios withdrew Girl Genius from consideration in 2012 to give another comic a shot at the award, and print comics with special appeal to fans of SF/fantasy literature—Fables, The Unwritten, Locke and Key—also tend to land on the ballot repeatedly. And, as often happens in awards chosen by nerds, the words "Joss Whedon" and/or "Doctor Who" tend to be synonymous with "Open Sesame."

That doesn’t mean the Hugos don’t have the power to surprise. This year’s nominees include “Time”, an experimental installment of Randall Munroe’s nerd-cult webstrip xkcd that tells a story of people (okay, stick figures) exploring a postapocalyptic world for over 3,000 shifting panels. It’s a sterling example of the possibilities of comics in general, webcomics in particular, and science-fiction storytelling, and the Hugo voters did good by singling out such a unique work.

Ironically, webcomics may have won widespread critical recognition just in time for the definition of “webcomics” to become meaningless anyway. If drawing for the New Yorker makes one a webcartoonist, surely we are all webcartoonists. And each new set of Hugo nominees makes it clear that, to fans outside the comics industry, there’s little meaningful difference between a comic you read online and one you read in print, except that the latter usually costs money. Now that we lovers of webcomics have successfully gotten our webcomics awards, maybe we should get in early on the push to dismantle them. 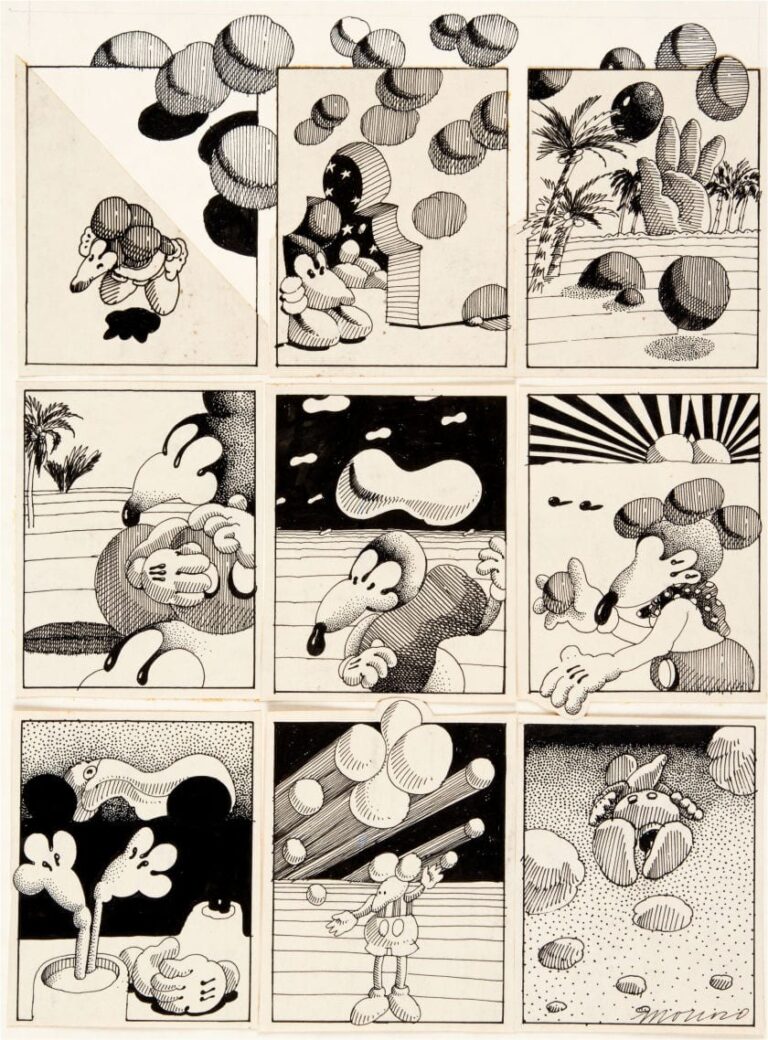 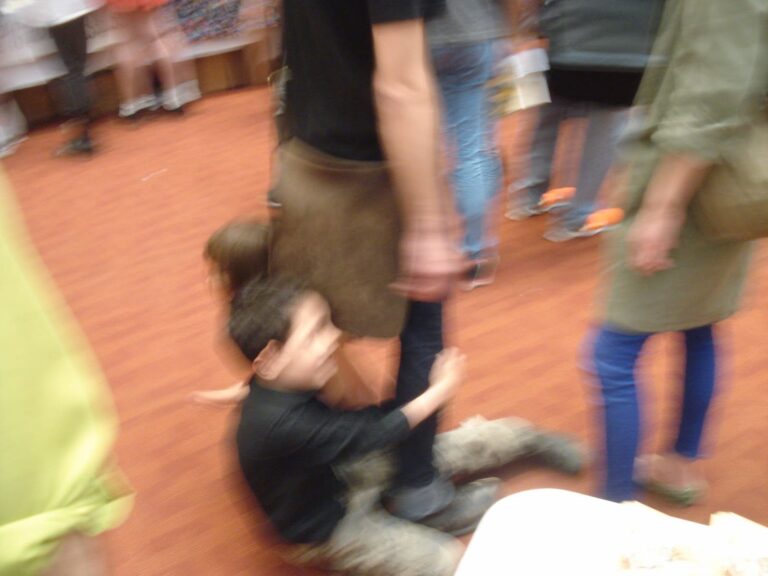