[Full disclosure: I first met and began working with Ben in 2000. I've published all of Ben's books, curated and written for him, and we're close pals. This is a rare enthusiasm-driven piece.]

Ben Jones's new television show, Problem Solverz (premiering tonight at 8:45 pm and then airing weekly) represents the first time since, well, Matt Groening's The Simpsons that an artist has emerged from a long and prolific tenure in DIY culture into mainstream television, core values and aesthetic intact. The ideas and visuals that Ben has developed and celebrated over the last 15 years are suddenly, amazingly going to be shown to millions of people. So I wanted to take a minute and, for the record, gather Ben's thoughts on the new show and explain a bit about its history.

This also the story of an artist with a relentlessly drive to communicate and an intuitive ability to work within systems to disseminate his ideas. Ben Jones (b. 1977) first emerged in comics in the late 1990s with a series of loosely drawn, very funny minis. He studied at the Massachusetts College of Art and Design, and in Boston linked up with C.F. and collaborated as "Paper Radio"; then he formed the collective Paper Rad with Jessica and Jacob Ciocci in 2000, and was swept up in the millennial boom in visual culture centered around the art/music/whatever space Fort Thunder, in Providence, RI. For the better part of the 2000s, Jones, solo and with Paper Rad, worked in nearly every aspect of visual culture: there were scores of zines and comics and appearances in anthologies including Kramers Ergot and McSweeney's; music videos for Lightning Bolt, Beck, and M.I.A.; numerous VHS and DVD video projects; large scale installations at galleries in North America and Europe; and a recent solo exhibition at the Fort Worth Museum of Art. Along the way, Jones, with Paper Rad, toured the country in a beat up Volvo station wagon -- embracing the underground circuit of noise shows and one-off performances. Ben, like his peers C.F., Mat Brinkman, Brian Chippendale, built his own internal visual and literary world without interference, and had time to develop it in relative peace long before anyone really noticed. That's significant in terms of establishing a strong, idiosyncratic identity, one durable enough to work with and through numerous systems and collaborators. 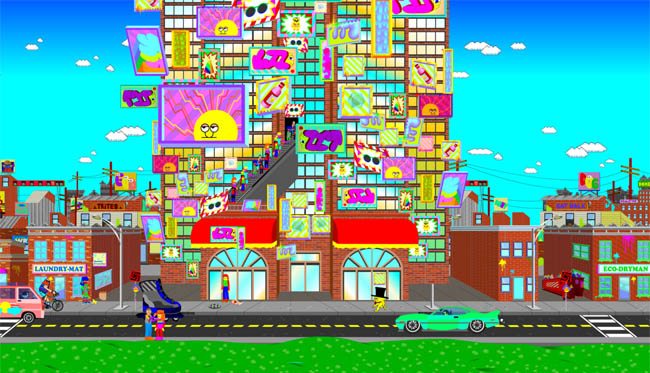 None of this would matter if the work wasn't valuable, but it is. Ben's output has always been concerned, to put it rather broadly and generically, with the human condition. His narratives used both his own characters and bygone pop culture iconography to tell stories about perception, friendship, spiritual longing, art, and the nature of narrative itself.

I spoke to Ben about the new show, how it's created, and his views on collaboration and the studio system. The premise of the show is pretty simple, just like his beloved Seinfeld:

It's three boys coming of age in a modern world: Alfe, Roba, and Horace. And with that you get a lot of funny things, you have a lot of emotions, and you have ways to examine yourself, others, and how crazy the world is. The "Problem Solvers" detective set up is about them being proactive -- and wanting to find their way in society. That's a very artistic, modern, and funny thing. 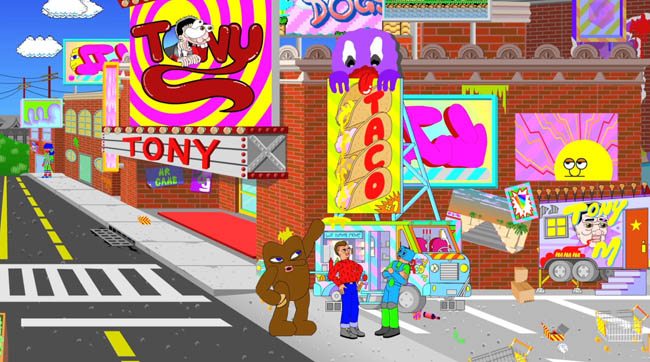 Having been animating for a decade-and-half now, Ben's highly conscious of both the lineage of the Burbank office he occupies and also the criticisms leveled at his kind of cartoon and form-based animation.

The animation and the storytelling I'm using are direct descendants of some of the best—and my favorite—animation, like Roger Ramjet and Rocky and Bullwinkle. This type of animation relies on really great design, jokes, editing, and timing. In essence, it's more pure animation than a Disney cartoon because, while Disney tries to imitate Orson Welles-style movie making, it's trying to imitate life. I think animation is about comic and cartoon artists getting together and trying to tell a story. It's a celebration of the native aspects of animation, as opposed to anything else. Look, at the end of the day it should be funny and awesome, which is something I admire about Super Jail. I'm in the Hanna-Barbera studios right now, and to me it's in that lineage.

Though Ben created his protagonists in 1996 (and earlier in some cases), and made versions of "The Problem Solvers" with Paper Rad (one of which I released on DVD with The Ganzfeld 7), the current incarnation of the concept started in 2006, when Jones began talking to executive producer Nick Weidenfeld about doing a project for the Adult Swim division of the Cartoon Network, which houses properties like Tim and Eric Awesome Show, Great Job!. The resultant show, Neon Knome, aired online, and the network subsequently decided to migrate Ben's vision to CN proper. So the show was retooled with new collaborators, including supervising director Greg Miller, who created the cult classic animated series Whatever Happened to Robot Jones, and a new team, among them cartoonists John Pham and Jon Vermilyea, who contribute design work. Ben likes the process, which makes sense: He's been collaborating with different people and entities for the better part of his artistic career. 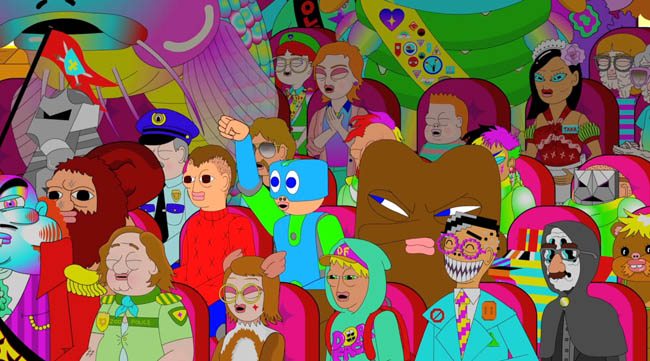 Ben's current way of working is not so different from how he's approached all of his projects, though he seems to feel truly at home with his new environment and mandate:

To me it's always been about the characters, and creating really compelling situations for them to inhabit and react to.  I tend not to be concerned with the specific context I'm in -- I'm just trying to get the ideas out. At CN I've been embraced and given an opportunity to work within the old Hanna-Barbera system. I spent years working within various systems -- the art world, zines, noise music, comics -- and applied those lessons to working within the largest artistic system there is, really. What's great about the current situation is that I'm working within a generation that is excited to use this new type of storytelling, and at the same time there's a studio that needs innovators. I've grown new muscles here, which takes into account listening to people's concerns, working with a network, listening to funders and other writers. I think if I even went back to doing a mini comic, it would be a whole new process on my end. I'm training myself to tell stories that are more effective. I think one of the things people always responded to about my work is that the only glass ceiling it has is me trying to stay true and communicate some real truths.

And the stories he's telling are uniquely told. Always very tech-savvy and design conscious, Ben has focused on creating work in the Flash application that is organic to its program (in the same way that he used to use a photocopier to make work that could only be made with photocopies), and then embedding that deeply in the narratives. Each piece of the Problem Solverz world is of its own design, and, I should note, each piece has roots in Ben's visual vocabulary -- from stripe patterns that evolved from installation art, to cityscapes originally built in comics, to pulsating edits which originated in his video work.

Of course the trick with being a lovable control freak is that you have to control. And as the show's creator, Ben's been working 14-hour days, seven days a week since last June:

I need to have my hands in everything. Last night I finished the music for an upcoming episode. Right now, for example, I just got an e-mail saying we need to do something about the "sky bush." So I wrote back, "Let me try to fix that. We need an actual skybush. Meaning, we need a bush made of clouds." It's 14 hours a day of anything like that. I voice Alfe and Roba, I direct and edit the voices, I direct the episodes with Greg Miller. The episodes are written by Michael Yank and Eric Kaplan oversees that. Then we storyboard the scripts, and I work with Vermilyea and Pham on the designs. When I'm involved in a process like this, it's about bringing out the best in my collaborators and looking at what the best stuff is out in the world, and celebrating and competing with it."

I've seen episodes, and I celebrated. Not just for my friend, but for a hard wrought vision I believe in, one I think is funny and humane and invaluable. So go check out the show. Follow it on Tumblr and Twitter, and then see where the boys take you. 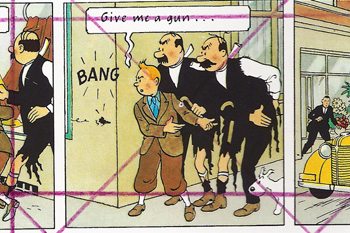 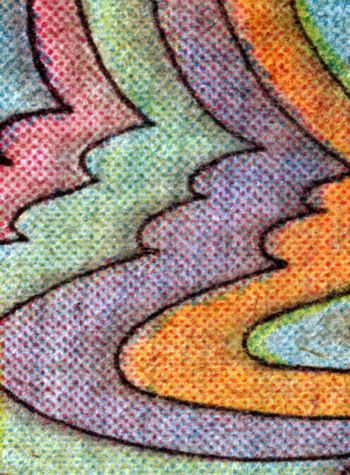