Answering silly questions ranks pretty low on our list of priorities these days. Wrestling with deadlines, racing around New York on various missions, seeking out, selecting, and nurturing artists and writers for The Comics Journal, working on our new Shadow project, eating, sleeping, and generally keeping the wolves at arm’s length are more serious and urgent concerns. Yet there is one silly question that has been popping up with increased frequency, most recently in response to some remarks made by my estimable cohort Gary Groth in the context of the Harlan Ellison interview two issues ago. Gary in essence agreed with Ellison’s contention that current overground comics are “bland, useless garbage,” and this did not sit well with some of our readers.

The question was thrown at me in person by Jack Harris, who then wanted to know why DC should help the Journal with news and cover reproductions when all the magazine does is denigrate his and his peers’ efforts; it was posed to the readers of The Buyer’s Guide by two of that paper’s most persistently lowbrow columnists; and it has surfaced in various guises in a number of letters of comment to the Journal.

The question is: “Why, if you have such contempt for the medium, do you publish a magazine about comics?”

Now this seems to me a pellucid answer to a question that was poorly thought out to begin with. Unfortunately, it appears not to be so. Generally, reaction to it is something along the lines of, “Well, yes, I understand that, but if you have such contempt…” etc. Clearly, a few words of elaboration on the subject are needed.

It is and remains my contention that the true lover of the medium is not the sycophantic fan who adores the good and the bad with equal fervor, but the discriminating, hard-nosed reader who refuses to tolerate the mediocre and the banal. If someone sets particularly high standards for a medium, it is a token not of contempt, but of deep and abiding respect for its potential. When these high standards result in the dismissal of most of the work produced in the medium, it takes a perverse logic to infer from this contempt for the general output a contempt for the medium itself.

The French, who have been known to have a way with art themselves, have two words to describe followers of the culinary arts: gourmet and gourmand. A gourmet is, of course, a lover of fine foods, a man or woman with a cultured and demanding palate. A gourmand is a gluttonous oaf who will stuff into his maw anything that doesn’t move fast enough to elude him. A gourmet tooling down the local fast-food strip would curl his lip at virtually every dish offered for sale—does this mean he has contempt for food? Of course not.

I sometimes sit and run through my mind the names of those creators who have achieved superior works in the medium: George Herriman, E.C. Segar, Winsor McCay, Carl Barks, Will Eisner, Steve Ditko, Jack Kirby, Art Spiegelman, Robert Crumb, Steve Gerber, Jean Giraud, Guido Crepax, Herge, Rene Goscinny and Albert Uderzo, Hugo Pratt, Berni Krigstein, Harvey Kurtzman, Craig Russell, Neal Adams, Rich Corben, Barry Smith, Roy Thomas, Steve Englehart, Marshall Rogers, Cliff Sterrett, Walt Kelly, and so many others—and I think to myself, “My God, this is a great and wonderful medium! It does things that are unique and dazzling and hilarious, and moving and strange, and we are the recipients of so many glorious treasures!” And when the high wears off, I must face the fact that so much of that greatness is in the past, so little of it in the present.

I recently spoke to a comics writer whom I consider one of the best currently working. He told me, in the course of an hour-long conversation, that he found the negative tone of the Journal distressing; he did not dispute the opinions per se, but suggested in essence that we stop focusing on today’s pap from the mainstream comics companies and turn instead to the alternative publishers. Forget about doing meat cleaver numbers on the bad; just ignore it and seek out the good instead.

He has a point. In fact, I think there has been a certain trend in that direction in the Journal of late, in the reviews section (which is devoting less and less space to reviews of single comics and more space to anthologies, reprints, alternative projects, etc.), the “Newswatch” column (which now devotes three or four pages per issue to non-Marvel/DC news—without in any way slighting the “overground” side of the news, though), and even the columns—witness this issue’s addition of Rick Marschall’s “Polychromatic Effulgence,” finally contributing a much-needed comic strip-oriented feature to the Journal.

On the other hand, Bertrand Russell once said, “Half the useful work in the world consists of combating the harmful work.” I think we owe it to ourselves and to the medium to remind ourselves of the failures that dot the comics landscape these days, and to point out why they are failures.

In fact, Mike Cane, a reader of the Journal, provided a most apposite quote on the subject in a long letter he sent us on the Ellison interview. The writer is Ayn Rand, the grande dame of libertarianism, and she offers a recipe on how to stifle greatness:  “…Set up standards of achievement open to all, to the least, to the most inept—and you stop the impetus to effort in all men, great and small. You stop all incentive to improvement, to excellence, to perfection… Don’t set out to raze all shrines—you’ll frighten men. Enshrine mediocrity—and the shrines are razed.”

If we allow the praise to go to the unworthy without challenging it—if we let readers soak up page after congratulatory letters page at Marvel and DC, and vapid and shallow criticism as it is displayed in some of our competitors, we are by default damaging the chances of greatness to shine.

Some editors, at both DC and Marvel, have in the past approached me and claimed, in essence, that our standards are so dizzyingly high that it is impossible to satisfy them, within the boundaries of the super-hero comic. In fact, in this very issue, Jack C. Harris expounds upon this theme at some length. I find this contention demonstrably absurd. The comics medium has produced, in the 32-page pulp comics format, under a monthly or bi-monthly deadline, in all genres including funny-animal, super-hero, sword-and-sorcery, horror, western, science fiction, work that is admirable and praiseworthy and has in fact, if memory does not deceive, been praised in these very pages. What’s wrong with comics these days—from our vantage point, at least—is not something insurmountably wrong with the format. If Steve Ditko and Stan Lee could produce Spider-Man, if Roy Thomas and Barry Smith could produce Conan the Barbarian, if Harvey Kurtzman and his gaggle of artists could produce Two-Fisted Tales, if Denny O’Neil and Neal Adams could produce Green Lantern/Green Arrow, it proves conclusively that the fault is not with the medium, the genre, the format, or the paper stock, but with the creative end of things.

And to those who, fists tightly clutched around the latest issue of Micronauts or Warlord, indignantly shriek, “Comics—love ’em or leave ’em!” we can only respond: We do love them. But we refuse to become apologists for the mediocre and the worthless in the process. To wallow in that which is artless and dishonest is an act not of love but of betrayal. The Comics Journal’s sights are pointed obstinately at the stars. Perhaps reading it is depressing at times; but I think the disappearance of the magazine, or of the basic philosophy that makes it what it is, would be more depressing by far. We haven’t given up hope for comics yet. We’re still waiting for the medium to flower. 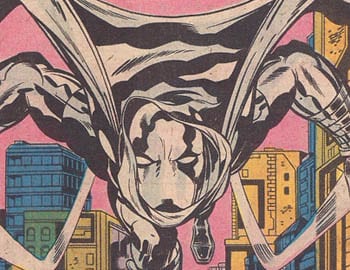 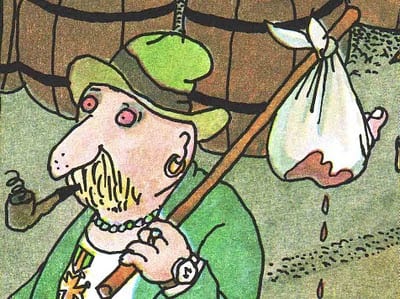