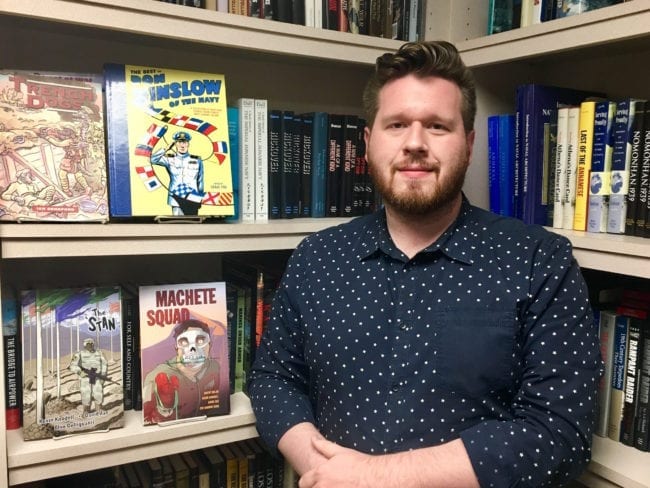 Dead Reckoning is one of the newest entrants into the independent comics scene. It’s an imprint of the Naval Institute Press, the publishing arm of the U.S. Naval Institute, which until now has dealt solely in traditional biographical and historical books. To learn about how the Institute adjusted to this new territory, we spoke to Gary Thompson, the head of Dead Reckoning.

Daniel Schindel: I understand you’re the one who pitched the Naval Institute Press to open this imprint. What was the instigation for that?

Gary Thompson: Yeah, it was really just what I wanted to do. At the time, there were a number of us here who were relatively early in our careers, and they were talking to us about what kind of things were we interested in. This was the first thing that came to my mind, something I thought made sense, something I know at least a decent enough about, and am passionate about. As anyone who pays attention to anything in the publishing world knows, graphic novels are actually being purchased. *laughs* I could see how doing graphic novels could fit with the overall mission of the Institute while also giving us a chance to do something new and different.

When planning this imprint and especially your first titles, did you commission your own things or approach specific creators for their ideas?

It was a little bit of both. I was attempting to acquire as many things that I thought would make sense for us as possible, especially with these first four books. I really wanted to try to get things that represented different kinds of readers in the comics market. Our lead title is Machete Squad, which is probably our most straightforward one, a memoir, and I thought that that worked well with the trade crowd and literary crowd. Then you have The ‘Stan, which is graphic journalism, Don Winslow of the Navy, which is a classics collection, and then Trench Dogs, which is more indie and independent. We have four different books for four, not completely separate, but largely different kinds of audiences, to show people the breadth of what we’re interested in doing. 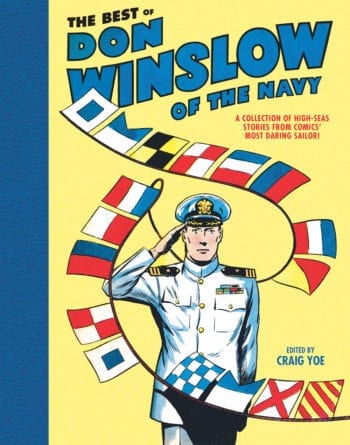 With Don Winslow of the Navy, did you specifically seek to compile a classics compilation, and was that the title you wanted?

Thompson: Yes! If you speak to people who grew up around the time those comics came out – who later served in, say, Korea – they’ll talk about how much they loved Don Winslow of the Navy when they were kids, how it achieved its aim to bump up recruitment in the Midwest. We were already well-aware of the title, so it was the first that came to mind for a reprint title. I met Craig Yoe at MoCCA Fest a few years ago, specifically mentioned that this was something we wanted to do, and asked if it was something that he’d be interested in doing. And he was, so that made it pretty easy!

Was it difficult to obtain any of those old issues?

Thompson: Don Winslow is in the public domain, so for the most part, the rights weren’t a problem. But finding some of the old stories were a little bit of an issue for Craig. He has a great network; he’d talk with old collectors and go out and buy several issues, but as you can assume, the older they get, the harder they are to find. Some of the earliest ones, like issues one through ten or so, were difficult, particularly getting decent-quality editions. Number ones are easier to find because people cherish those, but once you’re past that, Craig would find a few of them, flip through and realize it was too far gone, that he couldn’t really do a good reproduction of it. That’s one of the reasons why when you look through the Don Winslow collection, it goes chronologically and you see some big skips. The ones from the later ‘40s were just a bit more plentiful. They’re also funner stories, postwar and a bit pulpier.

How did Machete Squad come together?

Thompson: David [Axe] was the first person to ever submit a graphic novel proposal to the Institute, and he did it several years ago. No one at the time knew what to do with it, so I wrote to David and asked him if it was still available. That’s the book that eventually became The ‘Stan, but during those conversations, he mentioned that he knew somebody who had other stories. David is involved with a number of things with vets where they process their experiences by writing them out in comics or doing drawing. He had worked with Kevin Knodell previously with War Is Boring, and they met Brent [Dulak] through one of these programs. They thought it was a great way for him to work through his own issues, and Machete Squad came around roughly in the same timeframe when I was approaching David about the possibility of doing another graphic novel, so we just took it from there. 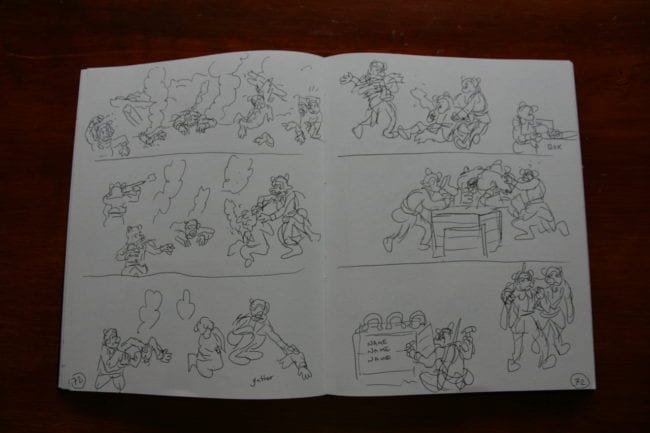 How did you hook up with Ian Densford to make Trench Dogs?

Thompson: I found him at SPX some years ago. Trench Dogs was originally a mini-comic, and he was selling it there. I walked by his table, saw it there, and at the time I was going to SPX specifically for early Dead Reckoning stuff. I was instantly interested, chatted with Ian for a while, bought a copy of it, eventually went out into the hallway and read it and loved it. I walked right back in there and had a further, longer conversation with Ian, and asked if he could do a whole book’s worth of it. There were plenty of great things from World War I to adapt into more stories like this. He took that original booklet and came up with a pitch for longform book, and then we went from there.

Looking at the broader history of war comics, was there anything that influenced the direction you took with these titles?

Thompson: I don’t want to say I specifically didn’t want to do some of the things that had been done previously in war comics, but I generally feel that a lot of older war comics sit in a kind of narrow bandwidth. They have a specific look, a specific story arc, and the same kind of dilemmas. They are good and I really enjoy them, and I really don’t want to disparage them at all. But at the same time, I was really trying to think, ‘What can we do that is different from that? What can we do that is not Sgt. Rock, or something along those lines? Can we make some of these feel more appurtenant for the comics market of today, rather than one of the ‘50s or ‘60s?’ I certainly still like all those comics and feel there’s still a place for them, but that’s only one seat at the table. There are more ways to tell these stories. I am interested in making sure that old-school approach still stays at the table, but that we also populate it with other people.

So in that vein, what non-war comics were an influence on the sensibilities of these books?

Thompson: Indie comics are definitely a major influence. I would say as a general comics fan, I’m more into those. I’ve been going to SPX since, I don’t know, 2004, and Baltimore Comic Con since roughly the same time. I love more mainstream comics, but not as much as I used to. I still feel there are great people there, but I’m now more in the indie comic / manga mindset. Whenever I think about what I like the most, that’s where I shoot, and that’s fairly easy to see with these first four books.

Beyond that, I look a lot to the British and the French, who have huge histories of military and war comics, and how they still feel different, fresh, and typically can go off in lots of different directions. We also have plenty of more standard American comics talent coming through now. A lot of them say, ‘You know, I’ve always wanted to be able to do a story like this. I have a father/brother who served in some conflict.’ But they didn’t think there was anyone in America who would publish them. So that’s been a cool side effect of being able to go to different conventions, talk to people, and try to spread the word about who we are and what we’re interested in doing. 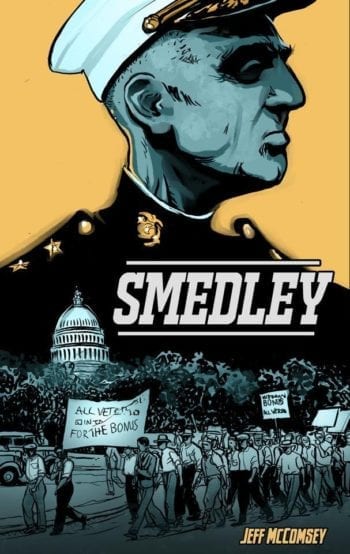 I know you have the Smedley Butler biography and the war animals book lined up next. Beyond that, what else are you looking at? What other directions do you see this imprint taking in the long term?

We have acquisitions planned right now into 2023. We’re going to have five books coming out in the spring of 2019, we should be announcing them all pretty soon, and then five more in the fall. Thinking long-term, I really want to be able to keep up the kind of independent feel from the creators we’re getting. I also want to be able to try to do more. I think that this early in the process, “Do more” is the charge you keep yelling as you move forward. I want to be able to focus a bit more on history. We have all these great stories, of sacrifice and so on, but a lot of people don’t know about them because they are buried away in old history books that no one really reads. So we want to be able to tell those stories in ways that are more accessible to people.

These are the kind of things people might assume we’d do from the beginning. We’re the Naval Institute Press, of course we’re going to have books about ships shooting each other in the Pacific, but I didn’t really want to do that off the bat. I wanted to be able to show people the different kinds of things we’d be interested in doing. We’re going to get to those Pacific conflicts, we’ll get to the Western front and all that kind of stuff. But I never want to lose sight of keeping independent people involved, smaller creators, and maybe acquisitions from other countries – French comics, British comics, and probably a Japanese comic or two as well. 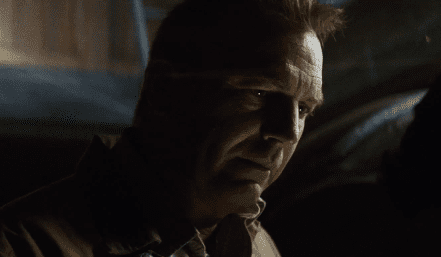 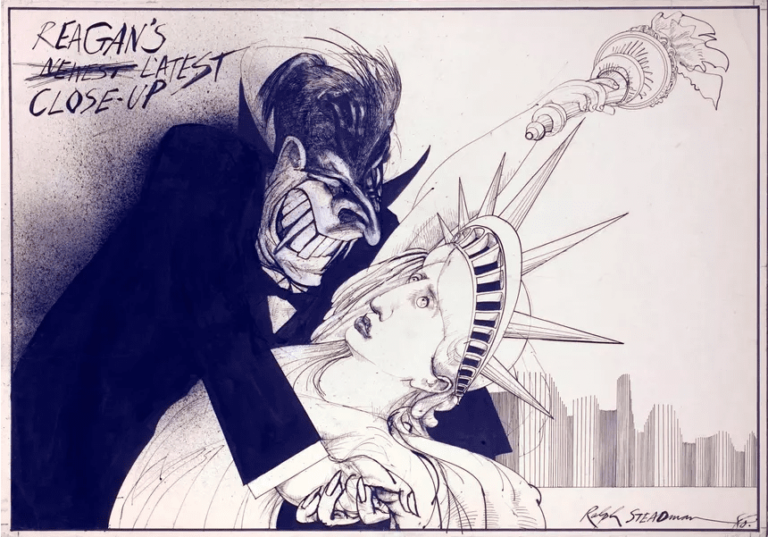 The Opposite of a Close-Up