So, my buddy Spahr and I drove out to see our friend's uncle. Uncle Louie. He was trying to sell his son's comic book collection. The son, Tommy, left the collection with his dad. And now the dad, Louie, wants it out of the house. Spahr worked forever at a local comic book shop here in town and is an expert in all things comics. And me, well, I like to think I'm pretty good at digging for comic book gold. So, Louie called us to look at Tommy's collection.

Uncle Louie said that Tommy had the collection appraised at $23,000. Eight longboxes. Roughly 3000 comic books. That's about 7 and a half bucks a book.

We looked through all of it and told Uncle Louie that the collection was worth about 500 bucks. Retail. That means a store that buys old comic books would probably offer him about 200 dollars.

"Yeah, that makes sense. See, what's happening is all the guys your son's age are dumping their collections now. They all had the same books. So the market is flooded."

We discussed "strategeries" http://en.wikipedia.org/wiki/Strategery on how Uncle Louie could unload the collection. He could eBay it. He could hire someone to eBay it on commission. He could try other stores in other areas. Ultimately, though, he would have to wrap his head around the idea that this collection is, right now, basically worthless.

Spahr said, "It's just like vinyl records. Remember when vinyl was worthless in the '90s? Well, those worthless records are finally worth money again. It came back around. So maybe just sit on the collection and drag it out in ten years and see what's up."

Uncle Louie laughed. "I don't think my wife will let me keep it in the basement for that long! She wants this junk outta here!"

It's funny how looking at old comic book covers triggers one's memory. Some of these covers are burned into my brain. I snapped some photos of some well known books and some unknown books.

Bob Layton cover on Iron Man #138 (below) is an old favorite. Check out those purples! 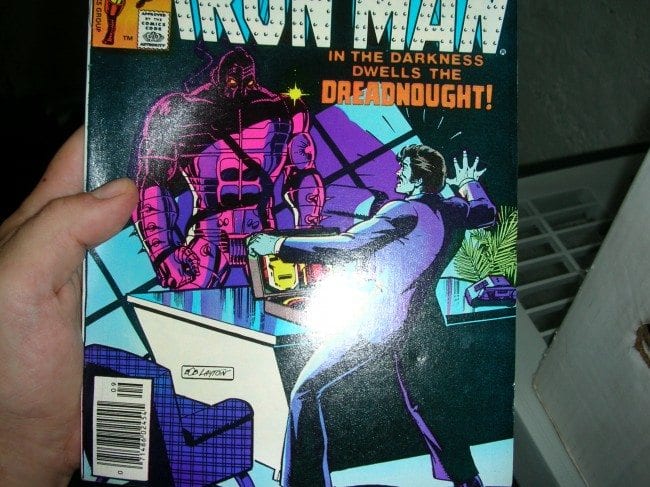 Barry Windsor-Smith hand-colored cover to Kull #9 from 1985 (below). Check out those purples! 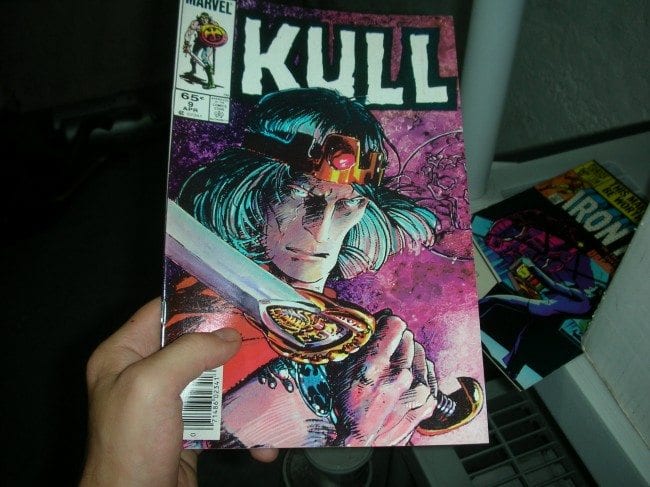 Jaime Hernandez would always bug me at shows asking if I had any Skull the Slayer (below) and I'd be like "No, they don't show up much anymore." Well, here was a cache of them in Tommy's collection. It's one of those '70s "time travel back to the dinosaurs but set in the future" type deals (see every issue of Heavy Metal 1977 - present). This is early Marv Wolfman (writing) with art by Steve Gan. 1975. A comic traded around the Los Bros Hernandez household. Or so I'm told. Cover is by Gil Kane? Anyways, when I tell people about Skull the Slayer, they often mishear what I say as Kull. So these pics, Kull then Skull, is my own private joke to myself. 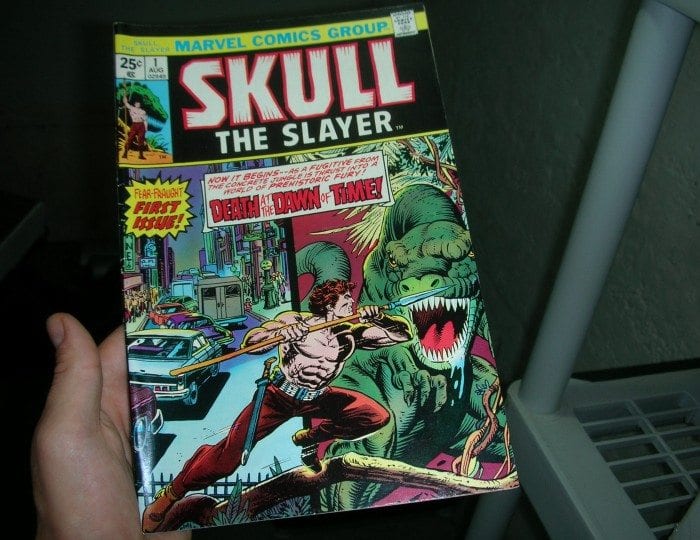 Uncanny X-Men #186 (below). This comic has some great art by Barry Windsor-Smith who, unfortunately, didn't do the colors for the interiors. He did colors for the cover though. Nice purples. 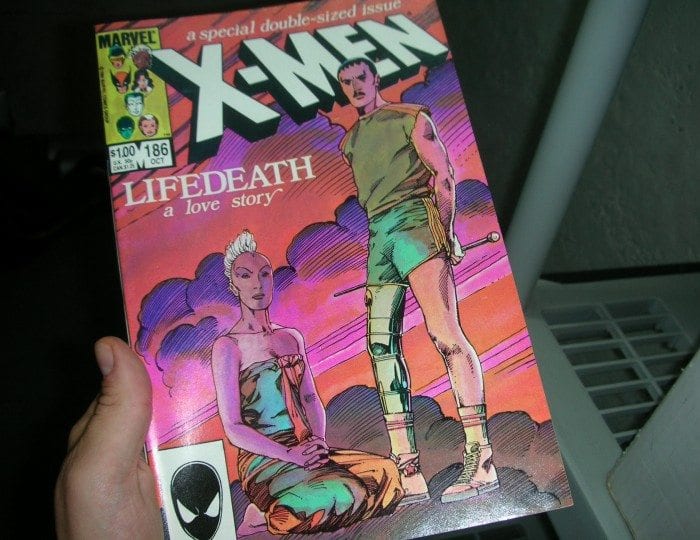 Barry was one of those guys who could just draw people hanging out by the pool. The figures are beefed up but they look natural. 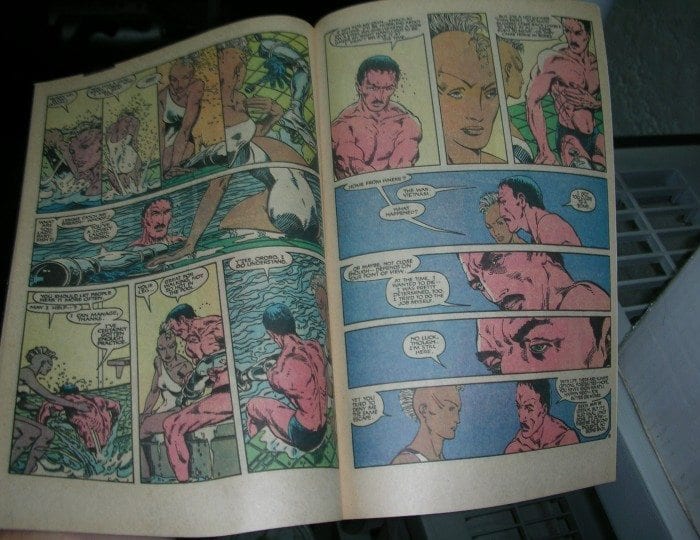 I like this part of the spread. The long panels paired with the zooming in is smooth: 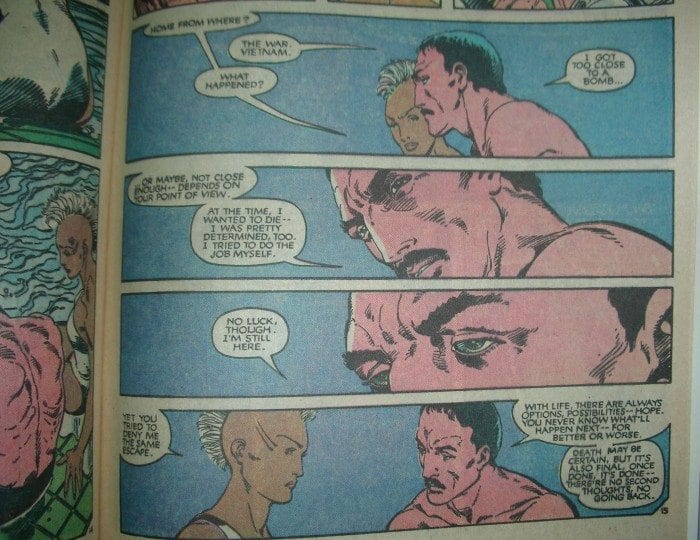 I like the framing of this "widescreen" panel (below): 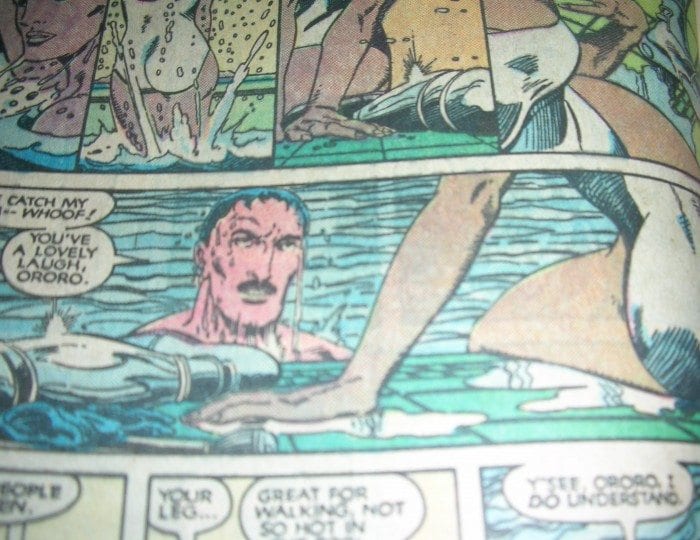 Found a few obscure comics up my alley. One of them was Shadow Agents #2  (below). This fine specimen of the post-black and white explosion era is from 1991: 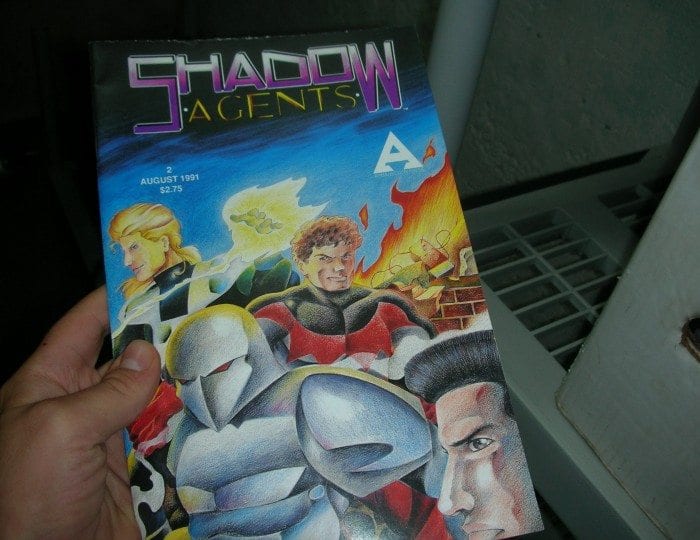 The tell-tale wide margins at the top and bottom. This usually means that the artist drew the art at the wrong scale. Probably drawn at "magazine" proportions and not "comic book" proportions. Art by Christopher Heidt. 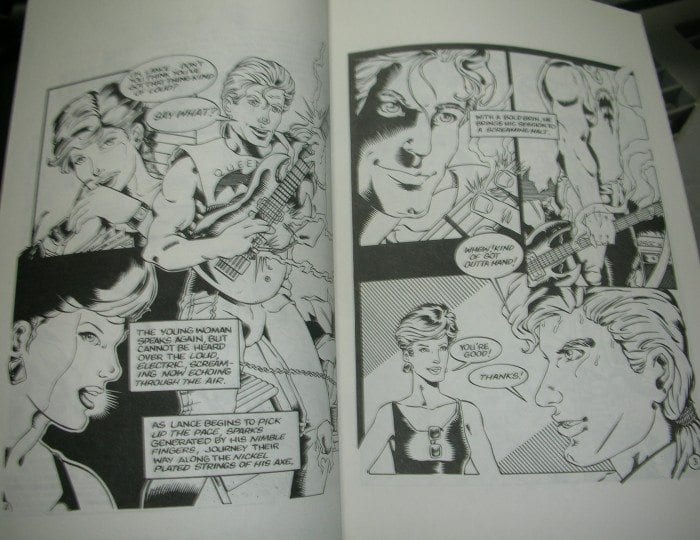 How did readers stand the 60 day wait between issues? 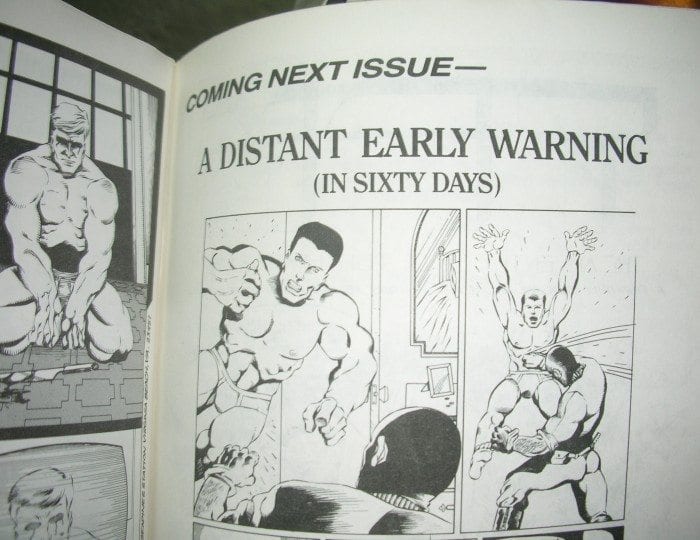 On the drive back home, Spahr and I got to talking about the comics back issue market. We were speculating that it could go either of two ways. One way would be like vinyl records where the bottom drops out and it comes around again. Or comic book back issues could be like the baseball card market, where the bottom drops out and never comes around again.

We talked about how it's crazy that there is this generation of comics collectors that basically all have the same collection. Exactly the same. Like the one we just saw. And how it's (basically) worthless. And how those collections were worth real money even ten years ago. Maybe more like 20 years ago. Remember G.I. Joe #2 from 1982? It used to be worth 40 bucks. Now, just a click away, there are 6 used from various sellers starting at 99 cents. Spahr joked that we should have all sold when the market was at its peak in the early '90s.

But then there are other books - like the first appearance of the Punisher or Wolverine - that went through the roof in terms of value. Those are the ones that we sold back then. If we had them, I mean. Bill Boichel tells a story about having a longbox (about 300 copies) of Giant -Size X-Men #1, the first modern X-Men book, and selling each one for 10 30 bucks back in 1985. One of the copies he sold  back then to a friend recently sold for $10,000. I asked Bill if he kept one for himself. "No, I sold the whole box that one convention and made a killing," he said with a wry smile. "Who knew?" 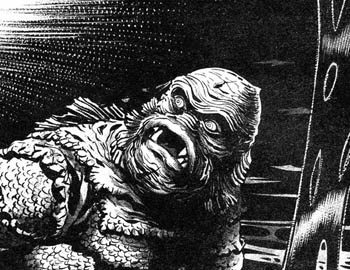 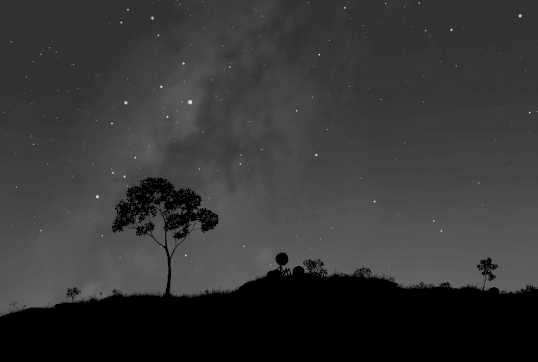