NADEL: I want to talk about Boys for a minute. 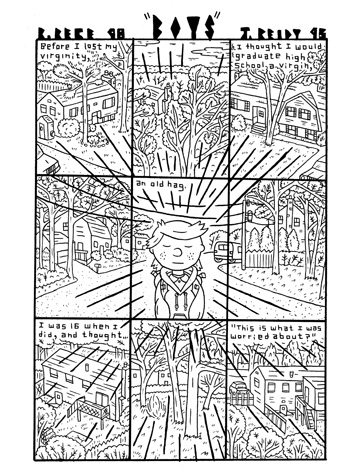 REGÉ: Lots of anthologies were asking me to do stuff. And I was still in the zine world. I thought it was a simple idea, doing a comic version of Joan’s zine. Joan Reidy is someone I went to high school with, and I became friends with her after I was in high school. She did this zine, Boys. Just imagine each page’s text typewritten, and then ripped up and put on a black piece paper. One sentence per page. I read it and I thought, “I could turn this stuff into comics!” I asked her if I could, and then I just did them. I sent them out to anthologies, all as one-pagers. A couple were in Top Shelf, they were in a Fort Thunder book, other places. But then when I was done with them, I just felt like they were so complete that I wanted them to be a comic book. There were only 20 of them, so it was a little short. On the long list of things I could do in the future is more collaboration with Joan. She has a lot of work like that. More sex writing that would make good comics.

REGÉ: Yeah, I love adaptation. After doing Skibber, I wasn’t sure if I could write fiction again. It’s really hard stuff to make up. I thought, there are other things out there, like Joe Sacco, and just lots of people going off into other areas. So I realized that I could do journalism or history or adaptation! Maybe it’s kind of like a cop out, like it’s less work —

NADEL: Except that I noticed that the way that you handle the artwork for say, Boys, or the Drawn and Quarterly piece or Cruddy, it’s different than the way you handle your own stuff. In the case of Drawn and Quarterly, and Boys as well, it’s much more formally experimental than a lot of the other stuff.

NADEL: Does the process change for you?

REGÉ: I guess I come up with it the same way; I break it down into what I draw, but it’s like, “What am I going to draw?” With a lot of these things, like the Drawn and Quarterly story, I’ll take things from my sketchbooks. I’ll take a doodle and decide it would be cool to use it somehow as a character. I’ve always been jealous of people that can take their sketchbook art and make it into comics. I think I bring a lot of that kind of stuff into it, that I mightn’t with my other comics. I’m hoping to do an adaptation that’s probably going to be really long. It’s this short story at the end of the book Kitchen, by Banana Yoshimoto. Her story’s around 40 pages long.

NADEL: Why that story?

NADEL: I was going to say it reads like a Ron Regé comic! [Laughter.]

REGÉ: When I was reading it, I envisioned it as a comic, right away. My interpretation of how John might draw her writing. I’ll probably tackle it similar to the way I did Cruddy; with only word balloons, and actions. I purposefully made it almost the opposite of the way that Lynda Barry does her comics. I did that for the joke-factor of being in a book like Lowjinx. In the process of adapting Cruddy and reading it, I realized that everything that she was writing I had to draw, and the book was telling me what I have to draw, and that I’d only do word balloons when the characters speak. I have no idea how I’m going to approach the Yoshimoto story. I might do it like that. I might do everything that she does and do it completely visual and maybe there will only be so many pages without words, and then when they say something I’ll do word balloons. That might make it a lot like Skibber. My biggest challenge is that there’s a character in it that’s a young boy dressing up in a Japanese schoolgirl outfit. How the hell do I draw that in my style so people know that it’s a boy? I have no idea. I think I’m going to give him really hairy legs, and maybe no hair. I’d really like to avoid taking huge chunks of her text and using it as narration. That’s a lot less “adaptive,” I feel. But I don’t know. I haven’t done it yet.

NADEL: Going back to Boys: I want to touch on this theme, which is girls …

REGÉ: Yeah, that’s a good one.

NADEL: A lot of the Yeast Hoist stuff and the autobiographical stuff —

REGÉ: I can’t stop myself from doing comics about girlfriends, basically. I’ve tried and I just can’t seem to …

NADEL: Well, the way you treat it is interesting, because, say, in Boys, you don’t see a lot of sort of heavily cartoon stuff, which is the way you draw, with penises and really explicit sex. I wondered about that, because you’re very frank about it. You don’t sentimentalize it, and it comes across in your own work as well — like in “Dini-Tear” and with the floating guy/blowjob comic in Legal Action Comics. Why are you so straightforward and why the explicitness?

REGÉ: Every once in a while, every couple of years or something, I feel compelled to do it straight. There’s Yeast Hoist #6, too, this one that everyone loved because it’s a tell-all. It’s my diary in comics form! It’s really straightforward and I’m not pulling any punches. I talk about real names and everything.

NADEL: At some point in that issue, you say “I’m sorry and I’ll never do these comics again.”

REGÉ: Yeah, exactly. I seem so embarrassed by what am I talking about. I felt compelled to do straightforward autobiography as opposed to being abstract at that point, I guess. A lot of the stuff is letters to the girls that I have not written to them; instead, I’ve made them into comics.

NADEL: But why so frank?

REGÉ: I don’t know! I guess because I’m writing a letter to them about something I’d like to talk to them about, but I’m not; I’m showing everyone else. Why would I want to show that to people? I don’t know. Maybe because of Crumb. Maybe I feel like I’m supposed to. Or … I don’t know. I guess I feel compelled to do it every once in a while. I’m working against that right now, actually, because the next thing I’m working on, Yeast Hoist #11, is going to have stuff like that in it. But I’m trying to hold back and put on the brakes because I don’t want to be as straightforward as I have been with that stuff in the past.

REGÉ: Maybe it’s the older I get. I don’t know. People actually seeing them, now. People know me more? I don’t want to feel bad showing it to my friends or the people involved.

REGÉ: Yeast Hoist is an ongoing minicomic. Each one is completely different. The first one was kind of like an illustration portfolio. I’m toying with the idea of “Oh! What if I had a professionally published series of books?” Maybe going in a Chris Ware vein of different sizes — a series of different books, similar in title only. I would like to have something come out regularly, have a schedule, because so many people I talk to are like “Oh, Ron. What have you been doing for the last two years? I haven’t seen anything since Skibber.” I’ve been drawing comics every day! I’ve put a lot of work into anthologies and either it’s a small thing they can’t find, or it’s this thing that costs $30. It’s hard to explain to people. I have to say, “Want to see what I’ve been doing the past couple of years? Take $200 and buy this huge stack of stuff — if you can find it. I did something for Non; oh no, you can’t get that. Two thousand people have it but you can’t, because it’s gone.”

NADEL: A regular comic book would be a vehicle for all of this stuff.

REGÉ: I’ve gotten to this point where I need to do what it is that I want to do. I want to keep doing it. So what’s the smartest thing for me to do? I guess not to do all of this stuff for anthologies. I don’t know. It’s hard to say no. 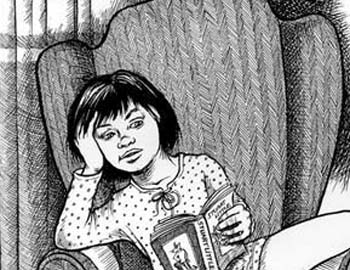 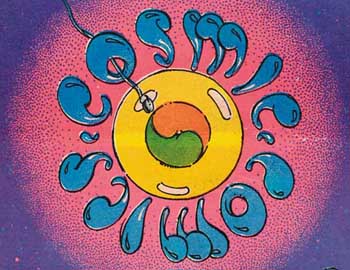