In 1997, Doctors Without Borders administrator Christophe André was kidnapped in the middle of the night by armed men and taken to an unknown destination in the Caucasus region. This is how Guy Delisle’s Hostage opens, and for 436 pages, we get a first person account of André’s three months in solitary confinement as he grapples with hopelessness, and more importantly, tries his very best to make the time go by without going insane. Delisle, whose previous work includes Pyongyang, Jerusalem, Shenzhen, and Burma Chronicles, takes a departure from his first-person travelogue style to tell André’s story as it was told to Delisle. The graphic novel was 15 years in the making. At the 2017 Toronto Comic Arts Festival, we talked to Delisle about Hostage.

I read that this graphic novel was in fact a 15-year process.

Yeah. I heard Christophe’s story in the newspaper and it was such an incredible story. I had a chance to meet him because I had a friend who works in Doctors Without Borders. We all went to lunch together, and I started asking him questions. I was thinking he probably didn’t want to talk about it because it was a traumatic experience for him. But he was super open, he gave me all the details and the whole story from beginning to end. I remember going, ‘Wow, this is fantastic. I do stories, and it would be nice to make a comic book about this.’ And he said, ‘Yeah sure.’ 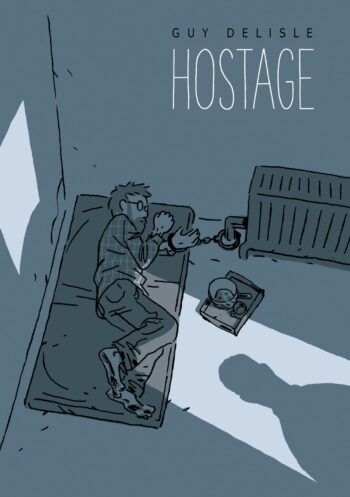 From that conversation, how did it take another decade and a half for this project to reach its conclusion?

I did a first version actually a while back of 12 pages which I showed my editor. He was very excited, but then I had work, and I was only working on comic books on the side at the time. A few years later, I came back to it and I didn’t like the first version of the book anymore. I kept postponing it. I went to North Korea. I had a kid in 2003. We went to Burma. I was always postponing it, and I needed to travel to France to talk to Christophe. I think I must have been afraid to work on this book because it was something else who had to talk about their story. It was a different process. And then, suddenly, I wasn’t traveling anymore and I realized it had been 15 years. I still had the recordings I did with him in 2002, and I worked with that. I’d phone Christophe once in awhile for small details. He would read the pages as I was doing them. I didn’t want any surprises, bad surprises, for him when the book finally came out. I wanted him involved in the process so it could be as close to the real story as possible.

What did Christophe think about the book?

He was very happy. His family, who had been through the experience in a very traumatic way because they didn’t know what would happen to Christophe. For his brothers and sisters and for the family to see the story that he’s told so many times but in a graphic novel, it was much closer to the experience that Christophe had than what they could imagine. So for the family, it was really good for them to read and see that.

I thought it was interesting that you told the story from a very one-sided point of view. The narrative stays with Christophe while he’s in isolation, and the outside world is essentially shut off for the readers the same way it was for Christophe in real life. This absence of information provides so much drama to the story. How did you decide on that?

I decided on it right from the beginning because as I was listening to Christophe, and he was giving his perspective, I knew I had to do an immersive type of book. I wanted the reader to really suffocate with him, to stay with him and just show how you survive in that situation where you have no control of your life. He thought he was going to be there for a weekend, then a week goes by, then two weeks, and you go crazy and think am I going to stay there for months? Then Christmas is coming, and you start thinking about people who’ve been kidnapped and been in situations for years. I wanted to show that process of time. That’s why it’s 400+ pages. I could have said three weeks later and shown Christophe with a beard, skinner and more tired. I didn’t want to do that. I wanted people to turn the page and see the routine and go crazy with him. The plan was to make it as close to his experience as possible. 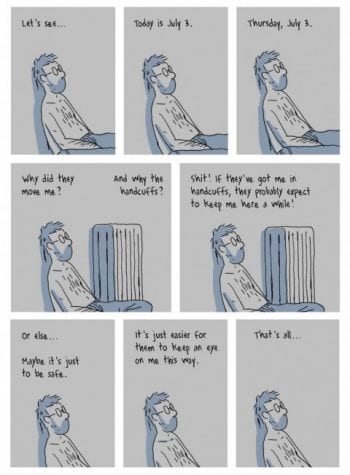 With a 436-page book, how much trust does it take in your own storytelling that you can keep the reader will engaged and interested throughout the process?

I have an exact answer for this one. After finishing 300 pages, Christophe was still in that room, and I thought, this is going to be boring. I had doubts, so I passed it around to friends who I trust because they’re good readers, and my publisher, and I waited for their reaction. They told me that it was good, and asked for the rest of the pages [laughs]. I thought, “Okay, cool.” I kept going. They reassured me. After 300 pages, I needed that.

The illustrations and colors are very muted, and you really went out of your way to illustrate the monotony of being trapped in that room.

The whole thing is very minimalistic. It was a bit more realistic than what I usually do, which is usually a bit cartoony. This story just demanded the style to be a bit more sketchy and realistic, so I worked on a process where I was doing all my drawings on paper and scanned all of it to have that sketchy feeling. Just very thin lines, no black and white, very simple, one color, that was enough to do my shadow. I didn’t want to use effects. Just very simple drawings, very simple colors, very simple text and a long, long story. It was a process. Since I knew it was going to be a long book, I couldn’t do watercolors. It had to be fast, like one page a day type of story, otherwise I’d still be working on it [laughs].

What reference material did you consult in putting together this book?

I read a few stories of people being kidnapped, but they were all very different stories. Christophe was on his own, and he managed to escape, which is different from most stories. I was actually influenced by my reading of comic books. When you’re doing comic books, it’s nice to read a lot of comics, so you know you can do this as well, and there’s always someone who’s going to come up with something new. I remember I was reading Louis Riel by Chester Brown, and there’s these action scenes in there where the suspense is very strong even though the drawings are very small and very far away. It’s almost the opposite of action, but it worked perfectly. That was an influence. On my first version of the book, I did a lot of action scenes on the kidnapping-- shadows, walking, closeups, all of that. It looked nice, but it defeated the purpose. Because the more special effects you put, the more far away it is from a real life story. So reading Chester Brown, I realized I had to keep it simple to make the readers feel like they’re there. So the kidnapping at the start of the story happens in one place, and boom, boom, they’re outside. The treatment was much more subdued than the first version, the colors were simple as well. When it’s a real life story, it’s better to forget about the special effects.

What did your wife, who also works with Doctors Without Borders, think about the book?

She really liked it. I was talking to some of her friends, who are administrators at Doctors Without Borders, and there’s the scene where Christophe finally gets a contact with the outside world after two months, they put him on the phone in the car, he talks to them, and it’s a request for a million dollars for his escape, and he tells them not to give the captors the money, that he can hang on longer, which is very heroic. I was talking to these administrators, and they were saying, “Fuck, I would never say that. I would say pay whatever you have to pay, get me out of here as fast as possible.”

He was genuinely upset that they were going to give up a million dollars for him. He was very upset. Upset, depressed. It’s hard to understand in a situation like that. He was working with the numbers for DWB and the money they’re trying to save, especially since they’re privately funded. He was just going crazy because of that. 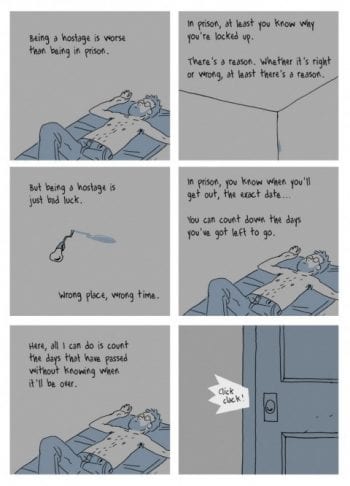 And he needed to keep himself sane the only way he could, which in this case was to alphabetically recall all the famous military battles in his head since he was such a history buff.

Every kidnapped person goes to his imagination in order to hang on. Christophe plays these board games where he re-does famous battles. He’s really into that. He reads a lot of books about Napoleon. I did a tour with him in Germany, we went to Leipzig, and he was on the field trying to see where the Battle of the Nation happened. But yeah, this happens to all the kidnapped people. There was one Frenchman I read about who spent all day going through the Bordeaux wine in his region. In a way, it’s nice to know, as someone like me who draws and writes stories, that imagination can save your life somehow. You have your regular thoughts as well aside from your imagination but those thoughts can be problematic because you start thinking about stuff that you want to do that you can’t. Christophe starts thinking about his sister, her marriage and whether they would cancel the wedding because of him, and that’s not good, you can get depressed. He was trying not to collapse, and decided he would go into his imagination as a way to escape.

You’ve done several first-person travelogues. After Hostage, are you looking to do more stories like this where you can tell other people’s perspectives?

Every week I have new ideas, where I think this might work, but I just wait and see to see which ones keep coming back to me that I want to work on. I don’t have a big book that I’m waiting for. People send me their incredible life stories now, but a lot of them don’t really interest me. It just so happens that I read Christophe’s story in the newspaper, and the story struck me as something incredible, that someone succeeded on escaping from a kidnapping. I got to meet him. We got along well. We did the book. I don’t think it’s ever going to happen again. 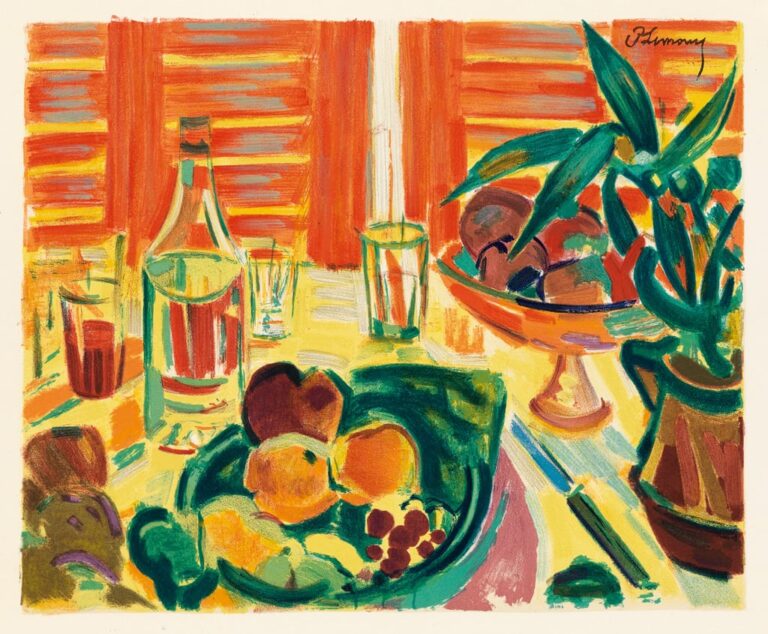 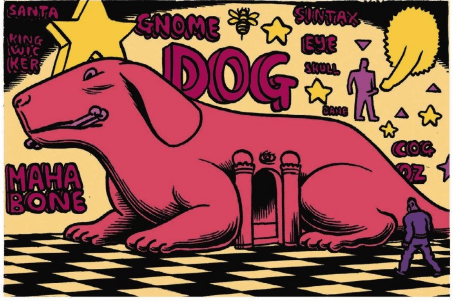