Today on the site, we are republishing The Comics Journal's 2007 interview with Darwyn Cooke, conducted by Markisan Naso.

NASO: So we talked a bit about your first work, the New Talent Showcase, and how you went to New York and sold that. But you didn’t really get comics work until 15 years later. So what happened?

COOKE: Well, like I said, back in that time there was no FedEx or e-mail or FTP sites or anything like that, so it quickly became apparent that I could not really make a living doing comics unless I was New York-adjacent. That led to art direction and design and that was something I pursued wholeheartedly for several years. What happened was, in my very early 30s, I finally took stock. You slow down a bit and go, “What the hell am I doing, why am I doing it, and is it what I want to do?” The answers to these questions did not make me very happy. I was doing advertising, and I wanted to do more with what I had. I had a lot of different avenues open to me, I suppose, at that point. Looking back at when I’d last been really happy, before life complicates your life, I had to go back to those summers when I was a kid, thinking, “I’m going to be a comic-book artist.

So I thought, “You know what? This is probably my last chance to take a shot at this. I was worn out from the work I’d been doing and the way I’d been carrying on, so I took a break and that’s when I put the pitch for [Batman] Ego together. So this would be like ’94. I go to a Chicago convention. Again, like I said, in my life when I’ve wanted to do something I’ll just do it and then take it wherever I gotta take it to show people, and figure it out from there. So I get down to the show, and of course, this was the year of the big Image boom. So I’m the last thing in the world anybody wants to actually buy, a guy who draws like Alex Toth! I couldn’t have picked a worse time.

NASO: Yes … Liefeld you are not [laughter].

COOKE: Oh hey, I can remember at that show, I was in line with a girl who was a colorist, I was just chatting her up and hanging in the line, the line was for Will Portacio and he was doing portfolio reviews. He looked at my work and he [laughter] was trying to explain to me how to do the kind of work they do. It was a bad year for me to be out there with that stuff.

We also present a tribute to the late French anarchist cartoonist Siné, written by his friend and colleague Dror.

Siné is a self-made political activist, whose very strong opinions are forged out of rage, integrity, instinct, and also a natural-born allergy to every kind of authority, whether it comes from the police, the army, the boss, the church or the State. His first spontaneous political involvement is in favor of the Algerian independence, and against his own French government. His style is a change from “funny little cartoons.” He is aggressive and violent; condemns, mocks and ridicules president De Gaulle, the army and France's colonialism, while supporting the armed resistance of the Algerian people. His pride is to be hated by a growing number of L'Express readers. [...]

May 1968 in the streets of Paris, Siné smells the scent of the revolution he was expecting, during the student uprisings. Against police brutality, but also because traditional newspapers, parties and trade unions are too shallow for his enthusiasm, he decides to create a new journal, L'Enragé, to support the revolution. L'Enragé becomes a university for cartoonists later to become famous in Charlie Hebdo (Cabu, Gébé, Reiser, Wolinski, Willem) but, then again, he is too radical for his time and the journal folds after only twelve issues. Original editions of Siné Massacre or L'Enragé are available on eBay, but the publisher who would make a book out of them today would deserve a Pulitzer Prize, or an honor medal for courage! Although he briefly collaborates with them in the 1970s, Siné refuses to join his friends in the satirical newspapers Charlie Hebdo or Hara-Kiri, which he finds funny but ugly, and not political enough.

—News. Early Saturday morning, the highly regarded cartoonist and designer Darwyn Cooke passed away after a battle with cancer (shortly after his illness was publicly revealed last Friday). Here is the obituary in the Los Angeles Times. There have been many tributes online, including one from TCJ contributor Tucker Stone, who also reprints an interview he conducted with Cooke. Tom Spurgeon gathered an enormous collection of Cooke images. We will have fuller coverage soon.

Last Friday afternoon also saw the release of a statement from DC regarding recent allegations of sexual harassment.

DC Entertainment strives to foster a culture of inclusion, fairness and respect. While we cannot comment on specific personnel matters, DC takes allegations of discrimination and harassment very seriously, promptly investigates reports of misconduct and disciplines those who violate our standards and policies.

As part of our ongoing effort to provide an equitable working environment, we are reviewing our policies, expanding employee training on the topic and working with internal and external resources to ensure that these policies and procedures are respected and reinforced across the company.

I find that when I'm talking in front of my son, I find that I try to say what I really feel rather than some version of myself I would've had in my 20s where I had some pose that was just, "I want to be contrary." ... I want him to know what I actually really feel and what are my real values. And you find yourself kind of [thinking], Do I believe in this? Is this an actual opinion of mine, or is this just some masked thing I'm trying to put out to the world?

I found it was very profound in that way. I sort of became more myself in a certain way.

—Reviews & Commentary. Rachel Miller writes about recent comics from Eleanor Davis, Rebekka Dunlap, Nola Lee, and Lauren McCallister, in something of a roundabout response to Monica Johnson on this site.

this is a project i have been knocking around in my head and note/ planning form for somewhere around 15 years. i have always known that the time and effort needed to actually do this book justice would take a concerted and sustained effort on my part that is well beyond my "normal" practice (i.e get it done whenever you can, fitting in work time between work that actually pays the bills).
i feel like that's the single largest factor that has kept me from attacking this project, over the years: "when and how am i gonna find the time to do this right?" 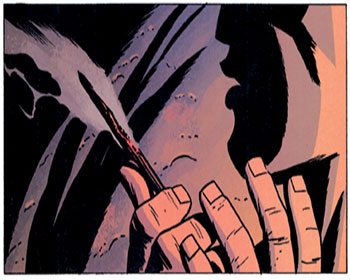 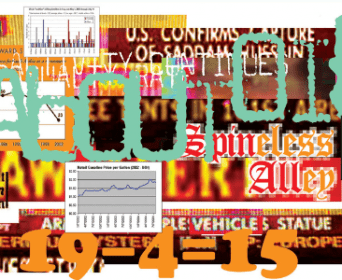