You might have missed this. Gene Ahern, a popular newspaper cartoonist covered the tense, rancorous presidential nominations by sending Major Hoople, his Our Boarding House comic strip character, to the Republican and Democratic national conventions. It’s understandable if you didn’t happen to catch Ahern’s coverage in the funny pages. After all, it happened in 1928. That was a long time ago, in terms of American politics.  But the presidential race of 2016 is similar to that long ago race between Herbert Hoover and Al Smith. According to Edgar E. Robinson’s The Presidential Vote 1896-1932, the 1928 presidential race was one in which “each candidate faced serious discontent within his party membership, and neither had the wholehearted support of the party organization.” Sound familiar? Beyond this similarity, the ensuing years have not diminished the amusement one can find in reading these cartoons and columns devoted to puncturing the hot air balloons of national politics.

Some nice Love and Rockets affection over at The Guardian.

Is it a sign of the times that one of our 10 greatest living cartoonists is on Patreon? Money is a very personal thing, and we have no way of knowing of what Chester Brown needs and doesn't. Lord knows he has a supportive long term publisher. But, as he explains, royalties are up and down, and why not this rather than teaching or another "day job". Certainly if there's one artist to support in this world, it's Chester Brown.

Here's an oral history of Dark Horse on the occasion of the company's 30th year.

Bill Boichel reviews the best-ever book about George Herriman over at Comics Workbook.

And Frank Santoro has a nice auction of unusual Dan Clowes items going on eBay now for the benefit of the aforementioned Comics Workbook. 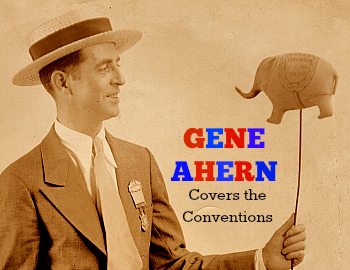