Today on the site, Frank Santoro is here with an old-school riff on Chester Brown’s Yummy Fur, inspired by a recent visit to CCS and discussion with some students there. Here’s a sample:

I think what’s interesting to consider is what Chester may have learned during those grid years and how he applied the skill of balancing the grid to his more organic approach. Ed the Happy Clown was a heroic, action-adventure story and it read like a Kirby monster comic, like a '70s Kirby grid. Quick, like a storyboard almost, but depicting moments a movie would not – it’s all timing – the way all the pieces, moments fit together. The grid accommodates the heroic and the banal moments all the same. It’s like a metronome.

Then, with issue 19 of YF, Chester switches to autobio and he now has the spacing to make the everyday seem heroic – look at the distortion in The Playboy! – it’s like KIRBY - yet Chester manages to be so spare and clear in tone. Chester’s work reduces so beautifully - The Little Man collection is smaller than the original comics but it looks fine (imagine reducing a current Marvel comic to book size) – so while mainstream work has gotten more clogged because of the format, Chester’s 5-inch by 5-inch squares are perfectly phrased notes, simple melodies strung together on a metronome that sound just right at any volume, any size.

And we also have Day 4 of Mike Dawson and his Cartoonist’s Diary. Today, Mike wonders exactly why he’s doing what he’s doing.

—News. It has been announced that Robert Kanigher, Bill Mantlo, Jack Mendelsohn will receive the 2014 Bill Finger Award.

Michael Cavna wrote a really nice piece about the Bill Watterson/Richard Thompson exhibits at the Billy Ireland library, with quotes from the artists, one of the curators, and others.

Then Cavna did it again with a story on the changing role of Universal Uclick editor Lee Salem, which includes input from Watterson, Thompson, Garry Trudeau, and Lynn Johnston.

Via Mike Lynch, here’s an hour-long Bob Andelman interview with Shannon Wheeler (that I haven’t watched yet myself): 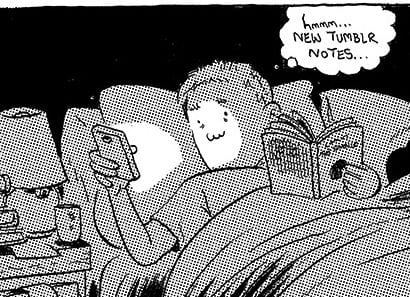 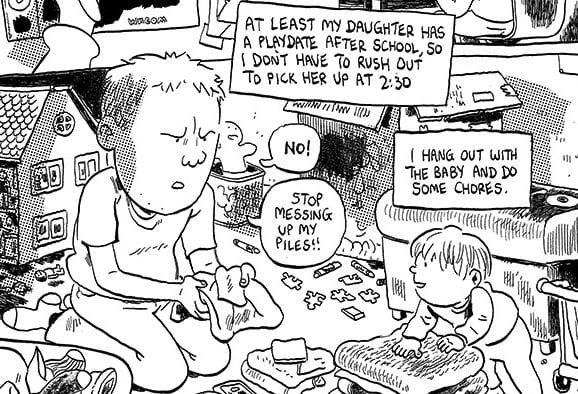