Today on the site, Ken Parille is back with another Grid column, this time close-reading Steve Ditko in terms of his relationship to "comic-book people."

Shown in outline, an artist leans over his drawing table, hard at work on a page of comic-book art. But before he can finish a few panels, nearly thirty figures storm the page, disturbed and angered by what they see. Some grip their foreheads in disbelief, others raise their fists in righteous indignation. Several deliver a more aggressive form of critique: one steals the artist’s inking brush, another shoves his pencil through the art, while others bend the page and set it on fire.

Fans typically gather at conventions like the San Diego Comicon to celebrate the medium they love and artists they admire. Ditko conjures up an altogether different kind of con: enraged fan-boys (and perhaps a fan-girl) convene solely to attack his work. In the upper-left, he signs the art “regards.” Is he joking? How can he have any regard for a mob out to destroy his art?

Along with comics fans, industry professionals attend comic conventions — and Ditko’s not so fond of them, either. In comics and essays he rails against the kind of “comic people” he derisively calls “handlers.” During a comic’s production, they “handle” (which for Ditko meant “ruin”) pages after the artist submits them. In the Comicon drawing, figures with the brush and pencil evoke handlers who, in order to align a comic with the publisher’s dictates, usurp the artist’s role by erasing or redrawing art or by adding elements such as sound effects without regard for the artist’s compositions. By 1978, Ditko had suffered decades of aggressive mishandling. He cared immensely about his work’s “integrity” (a key term in the Ditko lexicon) but most editors and publishers had no such lofty concerns. They believed that, since they paid for the pages, they could do what they wanted to them. An editor’s goal was not to create “art”: it was to please readers and sell comics.

In Ditko’s anti-con, angry fans and incompetent handlers unite against him and his work. Is anyone brave enough to dissent from mob rule? Perhaps the person sitting calmly atop the chair can see the scene from Ditko’s perspective. Unlike the others, he appreciates visionary comics. Or maybe he’s just waiting for the right moment to join the fray.

When I heard the news that Don Ault had passed away, my first coherent thought was, “This is how Pinocchio must have felt when Geppetto died.” Logic tells me that I still would have existed in some form or other had I never met this brilliant scholar and teacher, wise mentor, and surpassingly kind and generous friend, but the person I am today simply cannot imagine how such an ‘I’ could possibly be. My next coherent thought was, “I never would have thought of that Pinocchio analogy if not for Don Ault.”

And then suddenly I’m back in Don’s classroom at Vanderbilt in the mid-1980s taking “Popular Narrative: Comics, Animation, and Early Television”, and the shortish, slightly hunched figure at the front is explicating the contrast between the nature of evil in Disney’s flagship early animated features: where in Snow White & the Seven Dwarfs evil is localized in the Wicked Queen and containable by virtuous action, but in Pinocchio it’s pervasive and can come at you from anywhere and in fact may very well be inside you, and if you give it free rein you may end up a donkey yourself. And then I’m with another class of students and we’re all in the basement of Don’s house, sitting in seats scrounged from an old theatre while the 35mm projector in the back runs an original print of Snow White (obtained somehow from who knows where), and the Queen’s robes are the deepest, purest colors I’ve ever seen and have never forgotten.

That Geppetto analogy soon breaks down, of course, because Don Ault wasn’t a dogged craftsman shaping students into what he thought they should be, and while the transformative power of the Blue Fairy might hit closer to the mark, Don’s teaching, unlike hers, certainly wasn’t about inculcating socially acceptable conventional behavior, either. But her name does recall a much more appropriate reference point: the concept of faerie as understood by that poet of Don Ault’s life-long study, William Blake--not the tiny dancing woodland creatures but the domain of the uncanny itself.

We also have Day Three and Day Four of Chris Kuzma's Cartoonist's Diary.

Marnie Galloway began her career with In the Sounds and Seas, a silent comic about the creative, gestational spirit of women. Her comic Slightly Plural is a more literal representation of motherhood—both giving birth and the quotidian experience of being a parent. This comic covers the full gamut of Galloway's skills as a draftsman, cartoonist, and storyteller, as there are poetic comics, gag comics, straightforward autobiographical comics, densely illustrated stories, and minimalist pieces. She keeps each story short for maximum impact as she builds up to an overarching narrative regarding pregnancy, childbirth, and motherhood.

"River" is full-on dense Galloway illustration: lush greenery, detailed hatching and crosshatching, and vividly portrayed characters. It's fitting that Galloway, who holds a degree in philosophy, would open the book with pre-Socratic philosopher Heraclitus' famous quote about not being able to step in the same river twice. It's an apt quote, given that this book is not only about pregnancy but about being pregnant multiple times. The lesson learned here is that "experience isn't prophecy," but experience is helpful nonetheless.

Next, Sean Witzke really doesn't like Adam Smith and VV Glass’s At the End of Your Tether:

Ugly and boring and terrible. An early scene in Adam Smith and VV Glass’s At the End of Your Tether features a bully dressed as if the Karate Kid was fully relevant to our culture in 2019 buying a motorcycle from our lead character’s dad in a dismissive and douchey manner. It is a scene we’ve all watched and read so often that you expect something to happen that’s different or nuanced, or even played as a cliche to the hilt (we live in an era starved for camp). It does none of those. It’s just that scene. That’s when I realized that this comic was not only going to be bad but also difficult to finish.

Seth draws time out, both literally and metaphorically. It took him over 20 years to finish this book (he made lots of other books during that time, and published chapters of this one as he went along, the way Dickens did with his novels). His drawing style changed over those years. It’s as if “Clyde Fans” itself is a monument to passing time, and the first direct mention of time in the story is, curiously, a reference to a broken clock. “By the way, pay no attention whatsoever to the clocks. I’d be very surprised if any of them are still wound or working.” This is spoken by the character Abraham Matchcard in 1997, during an extraordinary 69-page sequence that begins the narrative, and it seems like good advice for the whole book.

These grotesque tales fixated in my young memory, at least as best I can recall down the tunnel of time. As a child, I felt trapped in sheltered suburbia. I scrawled a Jean Genet quote, “Family is the first prison,” on my school notebook. I must have noticed how cool Dick Tracy looked, with his futuristic two-way radio watch. I might have felt relief when he nabbed and jailed the dreadful Pruneface, Mumbles, Pear-Shape. Memory is treacherous. Mostly I recall sympathy for monsters. Dick Tracy’s captivating villains lured me into an early monster love that morphed over the years, the kind of monster love you can only have until you actually meet one. 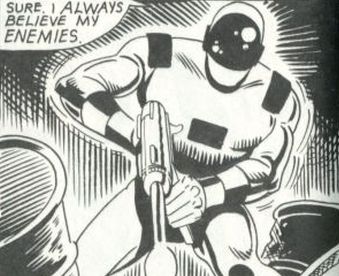 Steve Ditko and the Comic-Book People 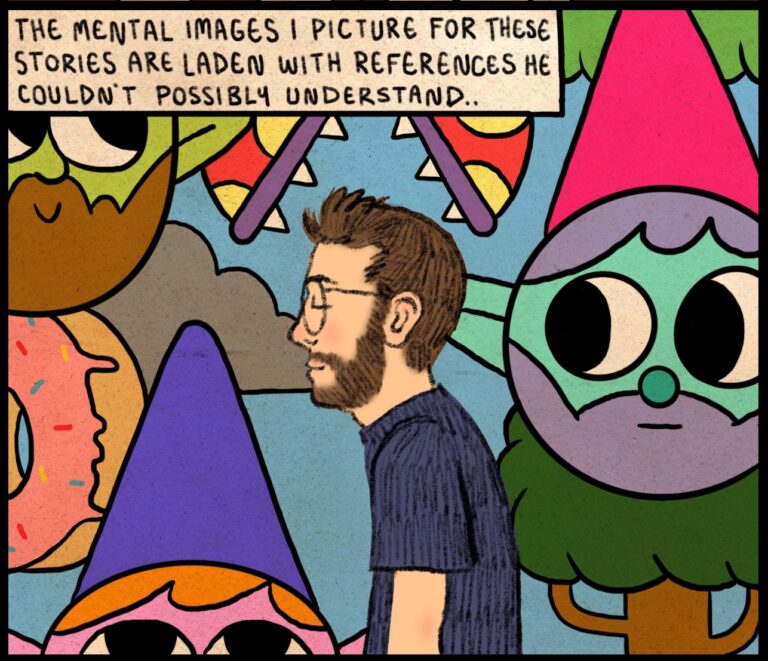