Hey there, Valentines! What'd ya'll get me? My favorite candies are Butterfinger BB's and my favorite flowers are vulture necks. I'm extra-medium in t-shirts and a 9 1/2 in Wallabees.

C'mon then, loves — aren't you excited to open your treats?

• Do you think I'm the kind of knucklehead who doesn't kick things off with the new Emil Ferris-illustrated poster for the Michigan State University 2020 Comics Forum? I thought you knew me. 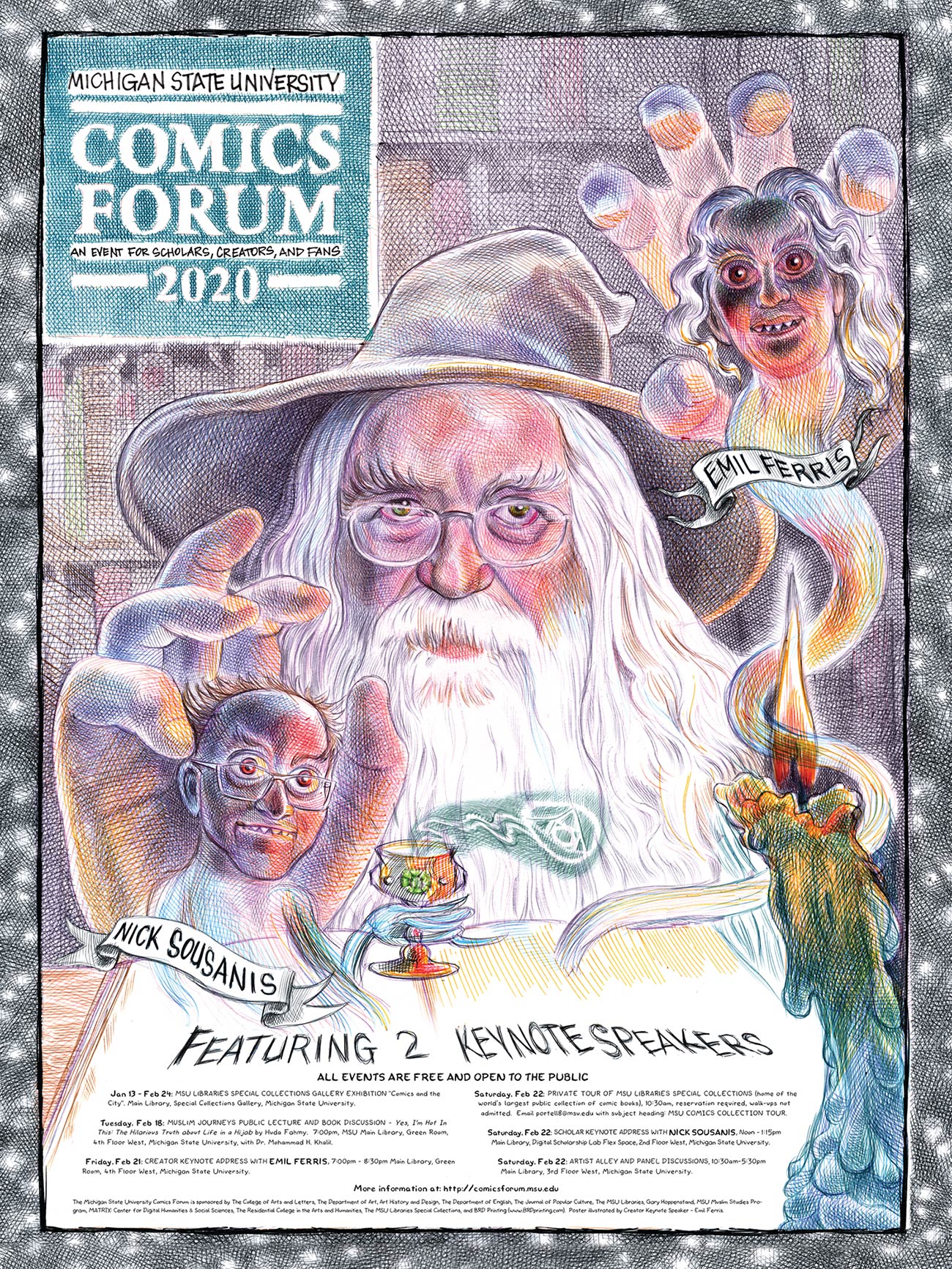 • Legendary French cartoonist Claire Bretécher has died and is remembered at The Guardian.

• The 2020 Creators for Creators grant is now accepting submissions. As Brian K. Vaughn wrote on Instagram:

"Some of your favorite writers and artists have banded together to give $30k to an unpublished creator or duo to support the creation of their debut comic."

GO GET THAT LOOT!

• Long-time editor-in-chief of Archie Comics, Victor Gorelick, has died, and is remembered by Archie Co-President Mike Pellerito at 13th Dimension.

• Here is a complete list of winners at the Angoulême festival, which I should have but didn't post last week. I especially like this link; it shows book covers and photos of the winners receiving their awards.

• Also from Angoulême: a video chock full of Wally Wood originals for an exhibit of his work at the show. Via Mike Lynch.

• And Broken Frontier has Joe Stone walk us through his experience at the big French event.

Some images from the process of making my @c2e2 poster. 4 concept sketches for the client to pick from, then a pencil rough, then various colour rendering ideas as I searched for the best way to draw the final.

A Case for Pencils
• Cartoonist Nick Downes by Jane Mattimoe

• TCJ has the latest manga-focused eye-opening column from Joe McCullouch: "The Artist’s Life and Death Redundant: Inio Asano’s Downfall." Go learn something, will you?

• Women Write About Comics pick some highlights from this year's Hourly Comics Day.

• Also at WWAC, Dani Kinney takes an in-depth look at the recently-relaunched megaseries of Marvel mutant titles and how the stories and their subtexts compare with queer history and experience.

• And another strong piece at WWAC, as Adrienne Resha writes about Arab representation in super hero comics.

• Be sure to click/swipe/scroll right on this post from the Schulz Museum, so you can see a few of Charles Schulz's sketches for Peanuts playing cards:

• SyFy Wire's Behind the Panel has posted part 2 of its video about the the history of Milestone Comics.

• Also at Syfy Wire: an exploration of the often violent origin stories for black heroines in comic books.

• Yowza, wait until you feast your eyes on these P. Craig Russell pages posted on Twist Street.

• I think a bunch of you are going to like this: Bill Sienkiewicz's YouTube channel has uploaded "History of Big Numbers pt. 1" — PART ONE!

• Look at this awesome project coming out of Desert Island in Brooklyn:

Beyond psyched to announce the release of a real soul-of-comics project “Comic Convention Covers,” a 60-page book co-published with Bob Stevenson from his amazing archive. The Ditko cover is a recreation of the very first comic convention program, created with then-16-year-old organizer Bernie Bubnis and produced in an edition of 50. Our edition was screenprinted by hand by Tom Toye, with full color risograph interior printed by TXTbooks in Brooklyn. In a nod to the history of the culture, these books will only be available in person at Desert Island and at Bob Stevenson’s tables at various conventions (he does several a year, and does not sell online or have a physical store). Much love to comics fans everywhere!

• The shortlist for the LDC Awards, a prize for graphic novels-in-progress being created by women, has been announced.

• History.com recounts the story of the 1957 Martin Luther King, Jr. comic book that galvanized activists in the civil rights movement — and which later inspired the graphic novel series March.

• Fleen has the latest info about the San Francisco Comics Fest, kicking off at the end of February.

• I love the labels Simon Gane illustrated for Burning Sky Brewery, below. Tons more from this series at Gane's blog (yes, blog!) here. 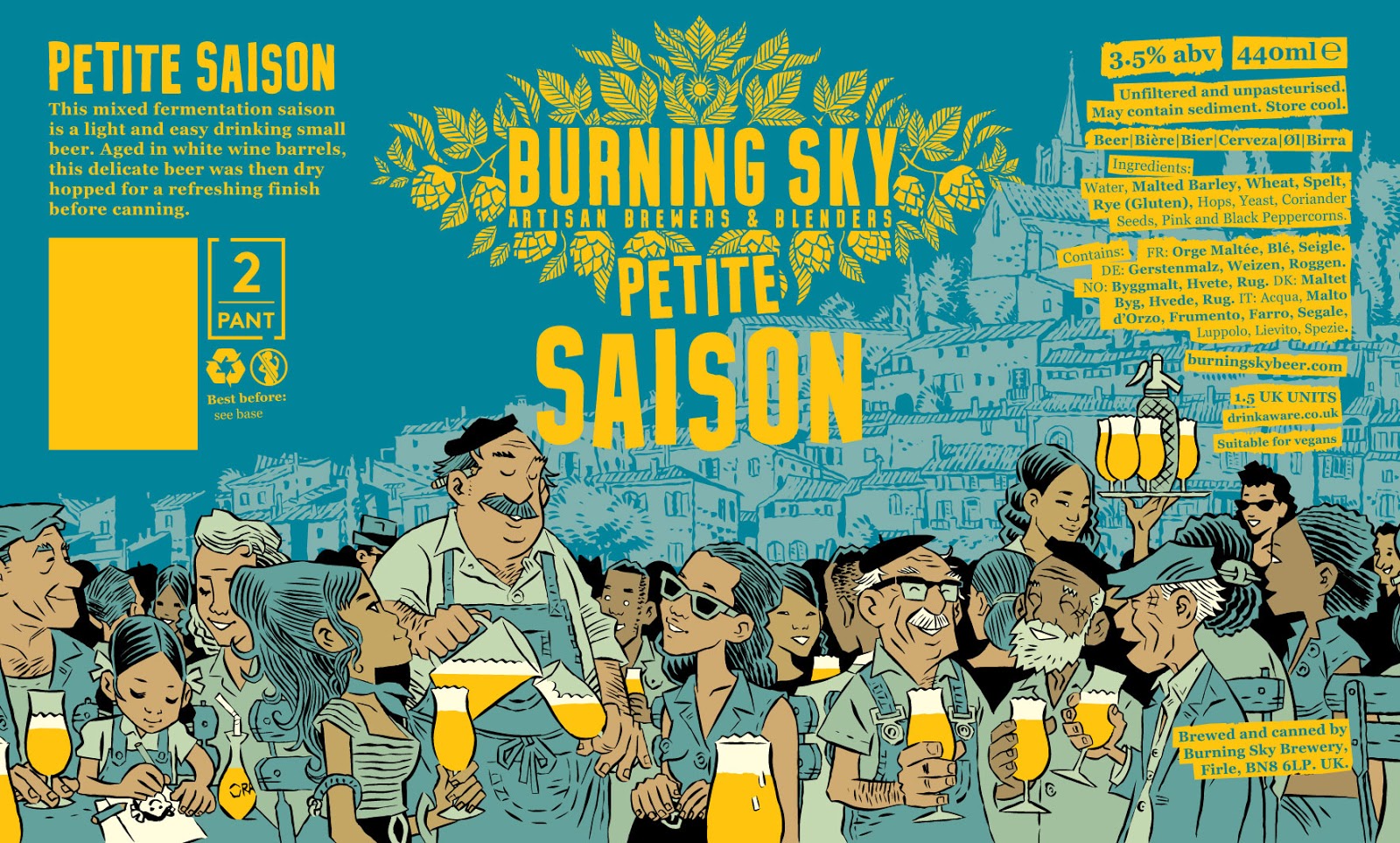 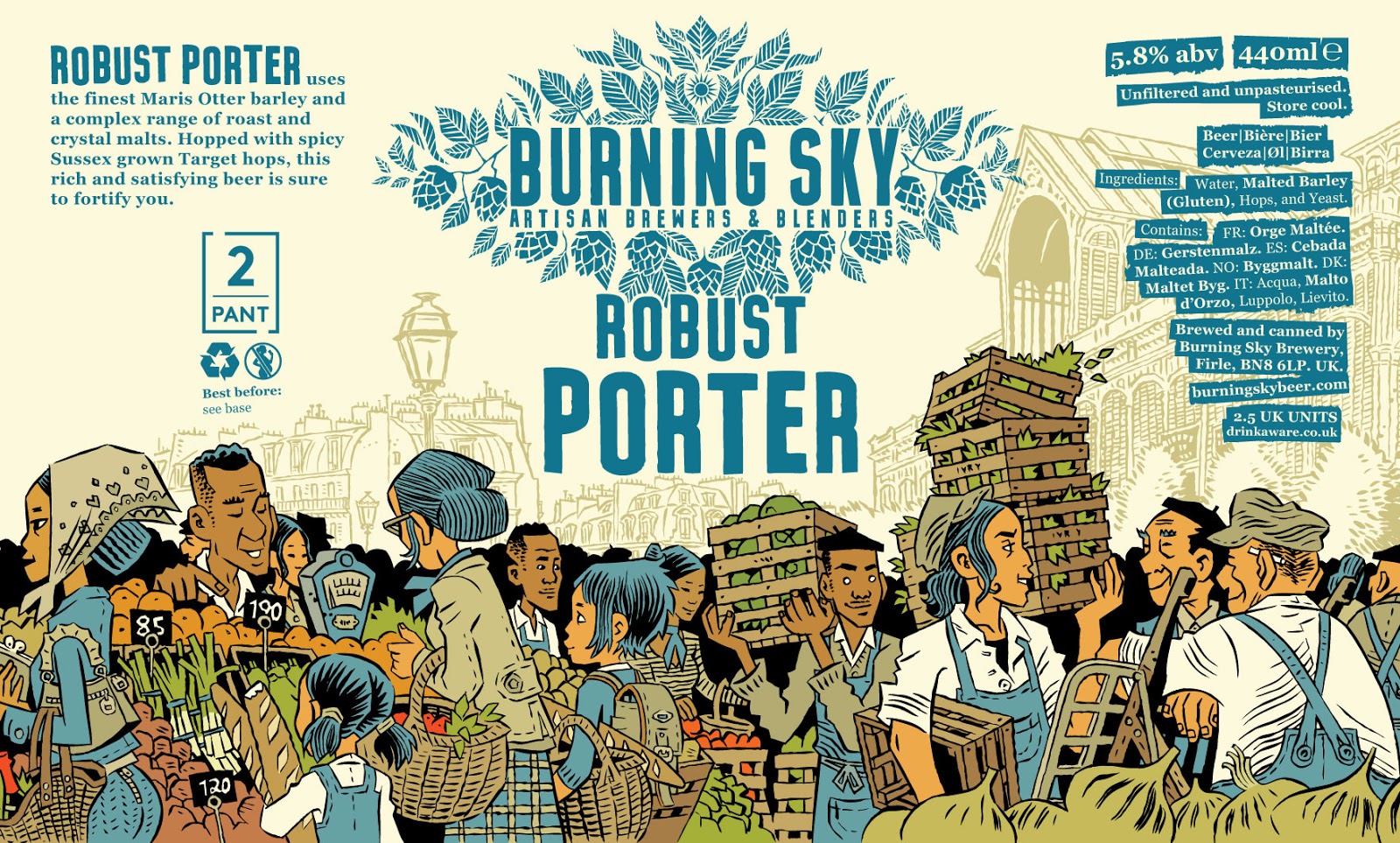 • This feels worth mentioning: Adrian Tomine popped up with a new illustration to accompany a piece of Haruki Murakami fiction in The New Yorker.

• The Library of Congress takes a look at Rosa Parks' appearances in comics, as well as a short-lived 1950 romance comic book featuring only African American characters.

• I always enjoy when The Daily Cartoonist shares the first and last episodes of a comic strip. This time around, it's [The Girls in] Apartment 3-G.

• Check out some odd old Captain Nice strips from the practically-unrecognizable hand of Wally Wood, posted at The Bristol Board.

Well, you've spent a nice amount of time with your first love (comics, not me, who am I to presume anything along those lines), and now true romance awaits you out in the real world. If you're not sure what to talk about over VDay BLTs, below is Chris Ware's just-debuted poster for MoCCA Festival 2020. Parsing everything that's going on here (and debating whether or not we're actually allowed to like it) should keep you and your dear one occupied until dessert at least.