Bright colors and nice drawings, that's all I wanted. The Teen Titans sparked this primal urge and All-Star Squadron led me to unfamiliar territory. The former was a mixed bag, but the latter was the first in a trifecta of "X-Mas Break" comics that made a positive impact on me during the holidays. Today we're looking at the second in that trifecta: a hundred-page comic book from 1974, Justice League of America #112.

These 100 pagers were more than dependable, they never disappointed. DC Comics went through a stretch of filling these up with all sorts of material. This one contained a new JLA story, an origin recap segment of the feature's villain, a couple of Golden Age (40s) stories, a text piece, letters pages, and a Silver Age (60s) story. I devoured this comic.

The lead story of JLA #112 had the team of classic super heroes fighting their android nemesis Amazo. I didn't mind Len Wein's script at all. In fact, I liked it. His scripts are usually a little too much for me, too overcooked, too eager to explain what is already being shown. It worked for me here. Dick Dillin's pencil art was the main attraction, as I've always liked his work. I've always found it a little stiff, taking notes more from the school of Bob Brown than Ross Andru, but Dillin's work always carried a certain respectability with it. This one was inked by Dick Giordano. 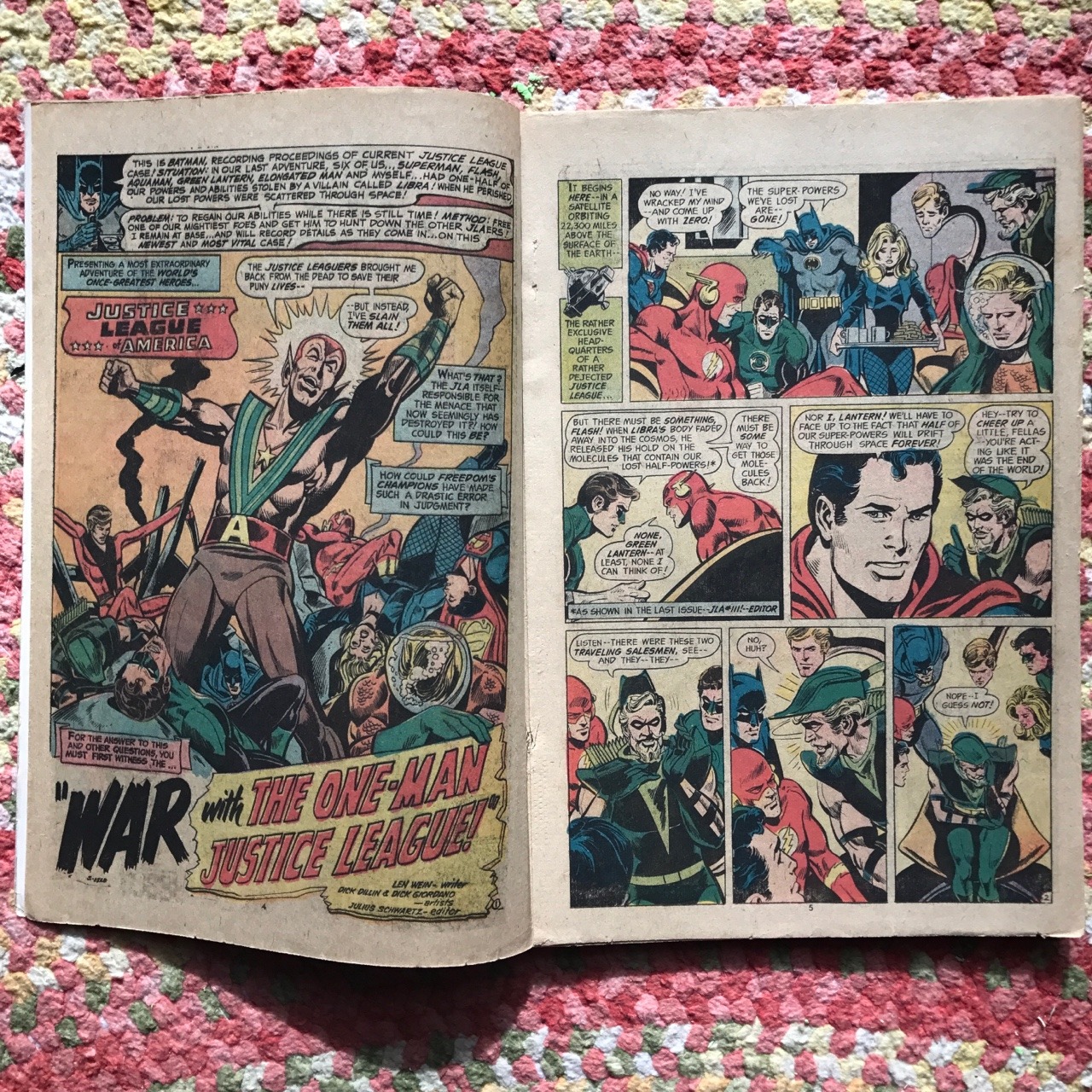 I was charmed by the Amazo origin recap, reworked panels from older comics. I really liked that my hand was being held. It didn't assume I knew all this stuff. I halfway know who Amazo is - I'm no expert - but this spread was informative and, if nothing else, fun. 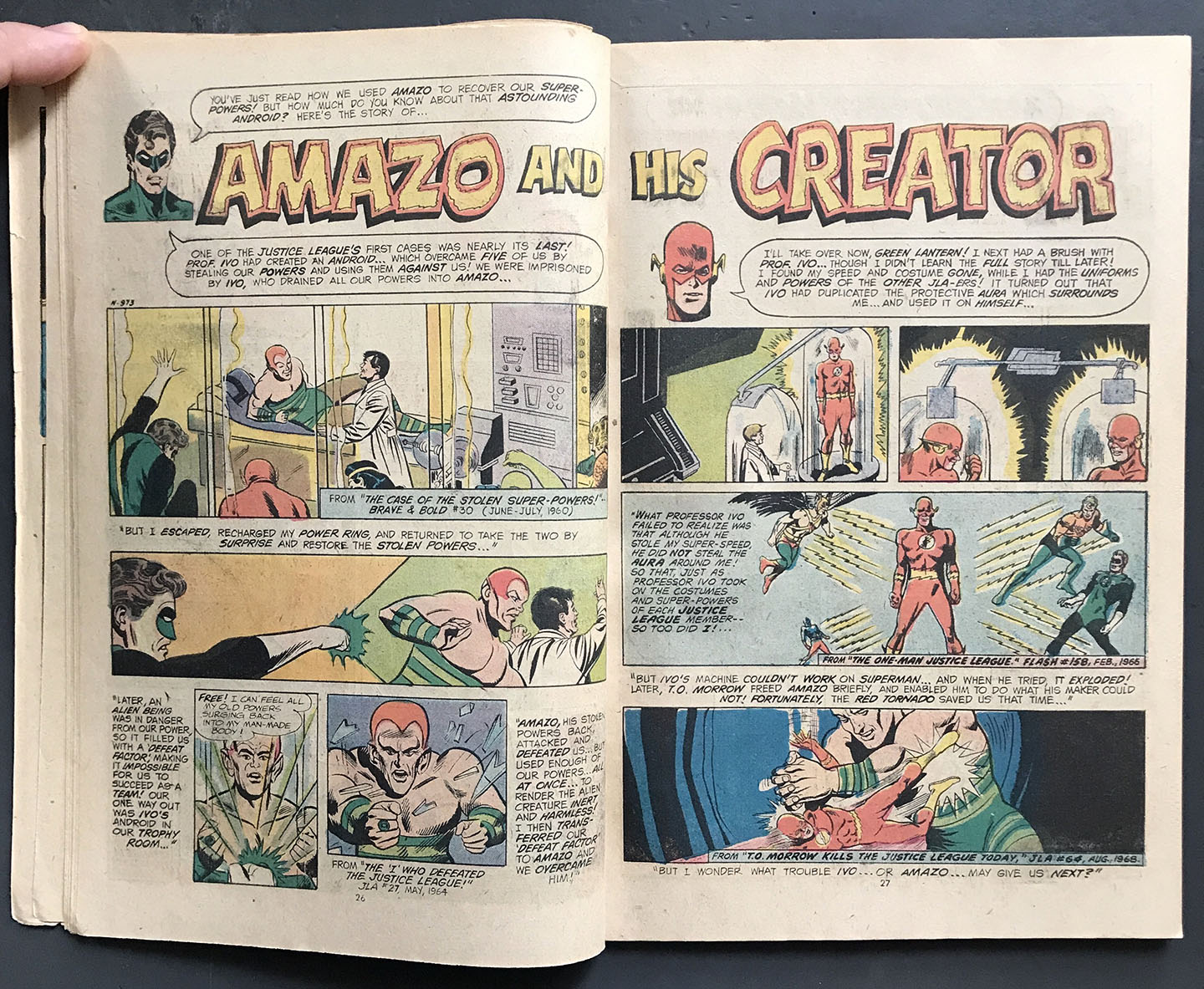 The Golden Age material had some nice Mort Meskin art but it was about the Seven Soldiers of Victory; a snooze-fest. I was determined to get through the entire thing, though, so I did. Then I read my first Gardner Fox story from beginning to end. It was a reprint of JLA #19. 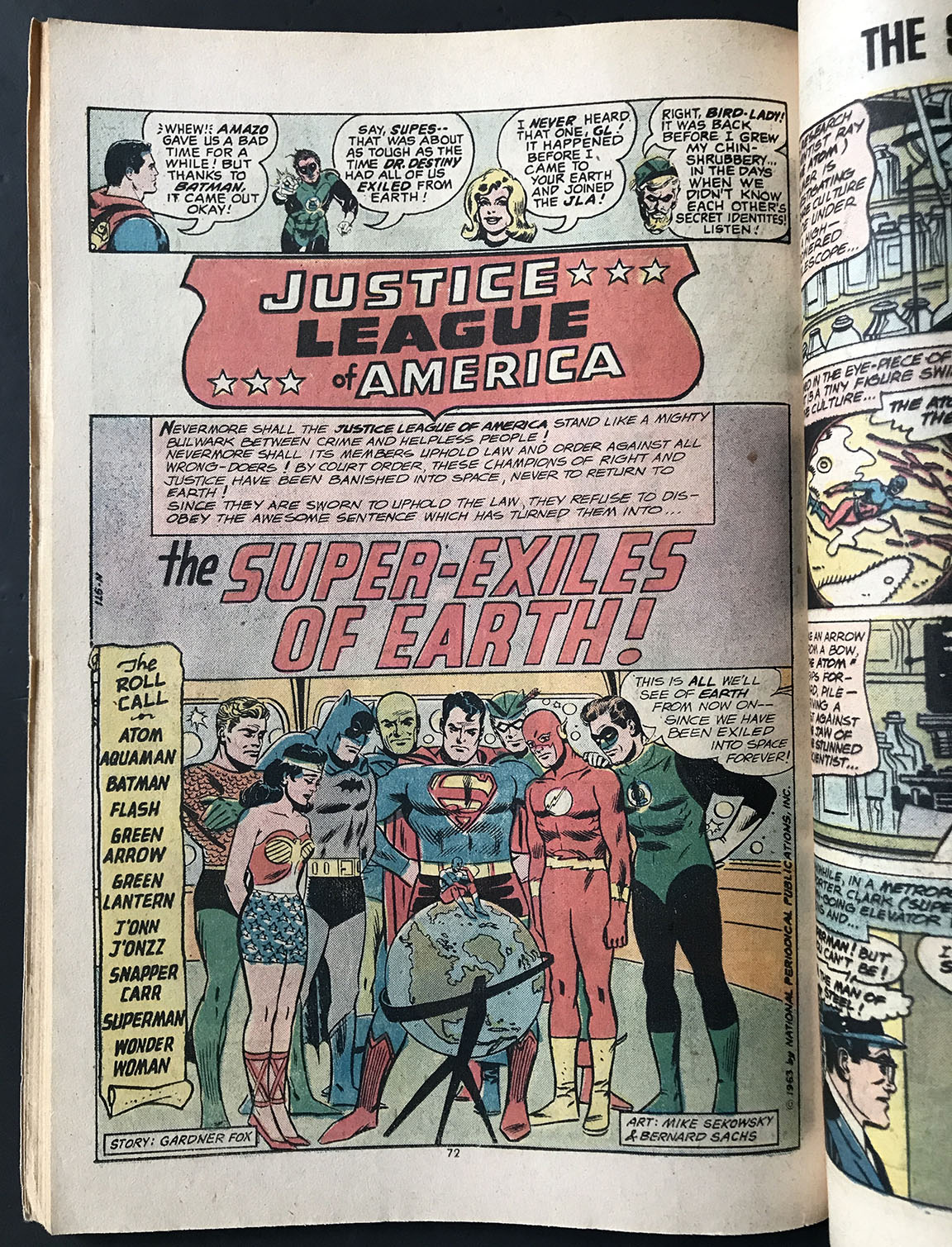 Look at that cute top row, clip art setting you up for the ride, making sure your requirements are met. And look at that amazing Mike Sekowsky art! Inked by Bernard Sachs this time around. Like Dillin, I've always thought Sekowsky had an old school illustrator vibe to him, but that he was more concerned with speed and efficiency than technical virtuosity... less concerned with showing off and more about meeting the deadline. Either way, I was all in, expecting a slog of pseudo science over-explained by a pack of humorless boy scouts. That's not what I got at all. I cracked open this new comic Christmas afternoon. A few hours later, the hooks were in. I wanted more. 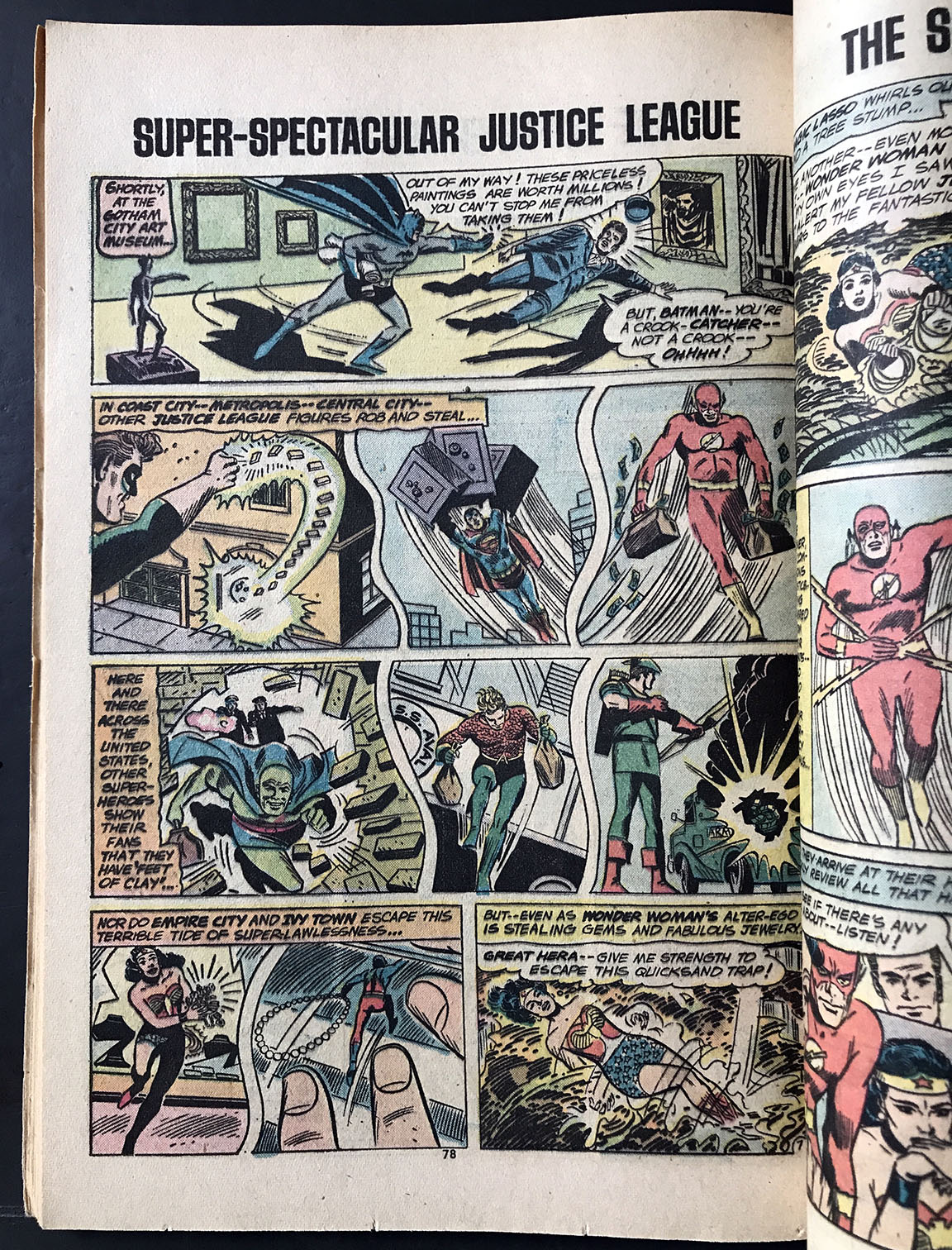 That JLA story destroyed my preconceived notions. The short of it it: the JLA's evil doppelgängers, made up of Dr. Destiny's dream stuff, forced the heroes to exile themselves from Earth. It was a brisk read, a silly story that took itself seriously enough to make you go with it. Things seemed to arbitrarily happen. The conflicts, forced and the solutions, pretty random. The overall scenario stretched credulity even within the boundaries of a super-hero comic, and I hate to describe it as unintentionally funny because that would be too mocking but... but... this scene... 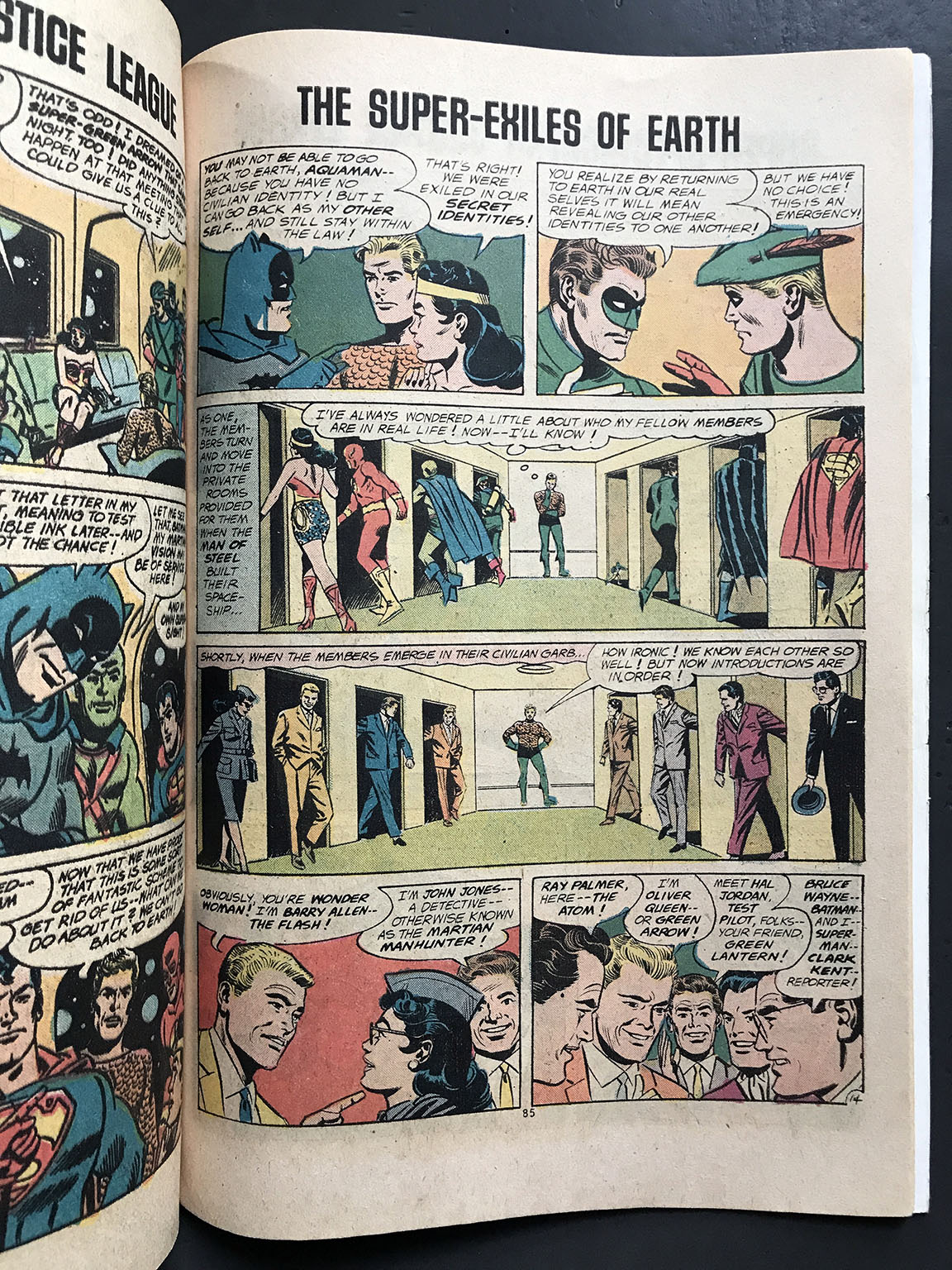 None of this makes sense in any way, yet it works. It's like a screwball comedy where the art plays it straight and the static quality of comics tempers it into a dreamlike string of moments and people and things. Not "dreamlike" in a post-modern way that would thematically match the villain of the story. This stuff was created on the fly for kids to be entertained for a few 1963 minutes. 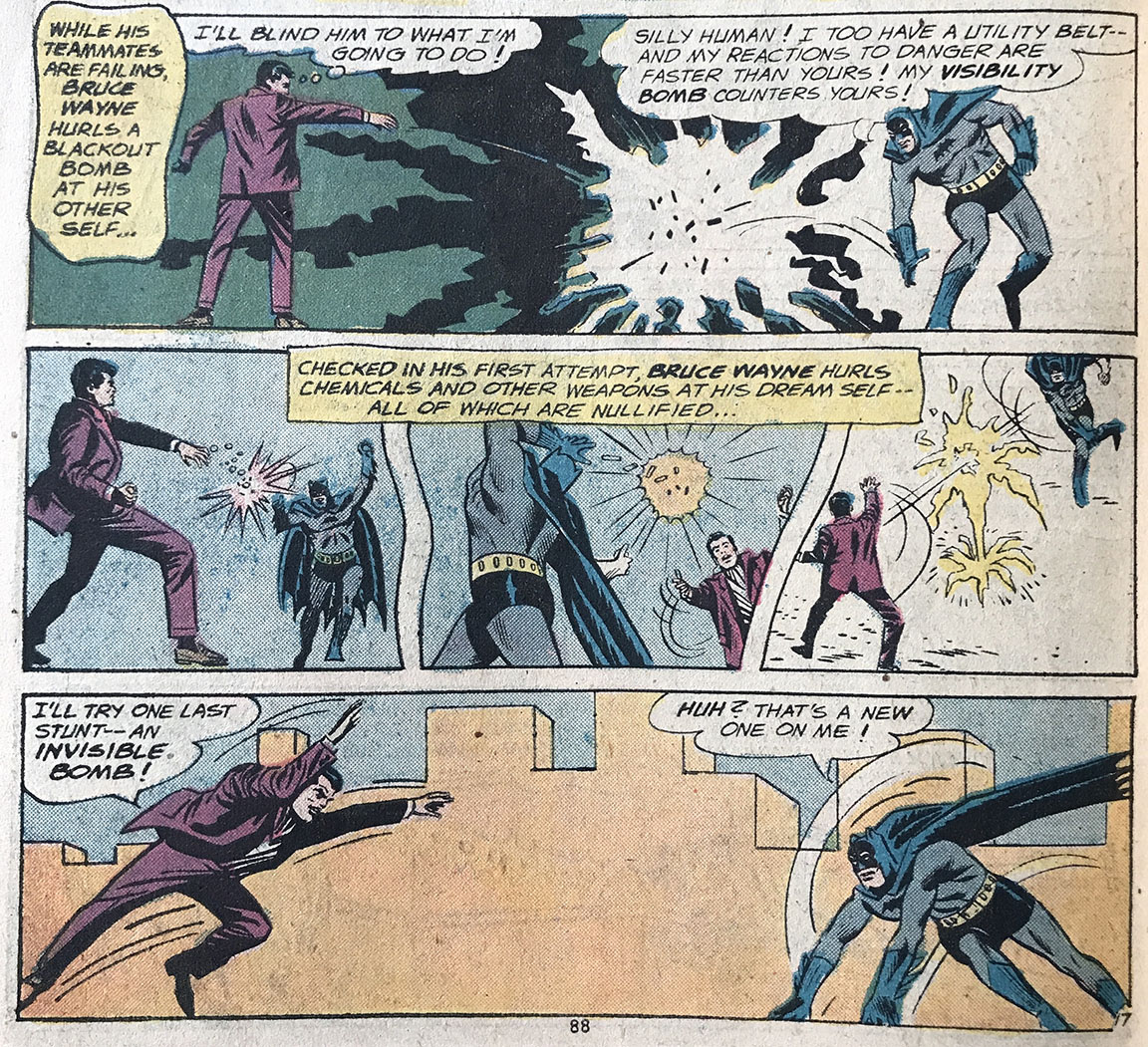 The back-end of this story had a truckload of exposition, an ending that involved coating the world with "amnesium" in order to wash away the story's consequences. You think the JLA were concerned with the ethics of mind manipulation? Get real. It was all a dream! An imaginary story!

It also dawned on me: no wonder Stan Lee and Jack Kirby and Steve Ditko kicked this company's stuffy ass. 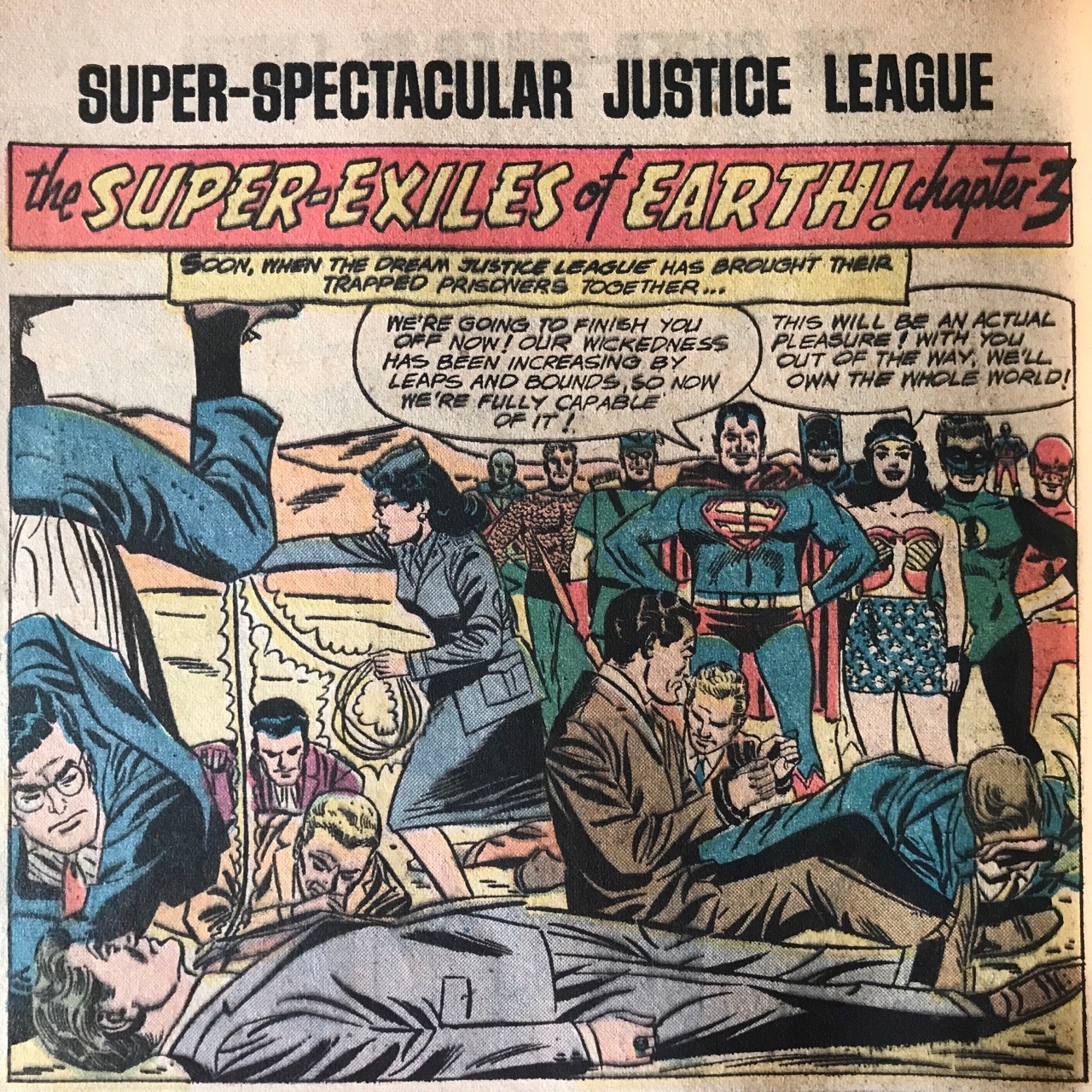 Again, I cannot stress how much I was into this improv-level type of comic. Between that Silver Age magic, the Golden Age filler, and the solid Bronze Age features, I was hungry for these aging artifacts, for the Justice League and their clean costumes, their identifiable powers, and effortless personalities. I hit up a few more shops from town to town during "X-Mas Break" and came across four more hundred-pagers. 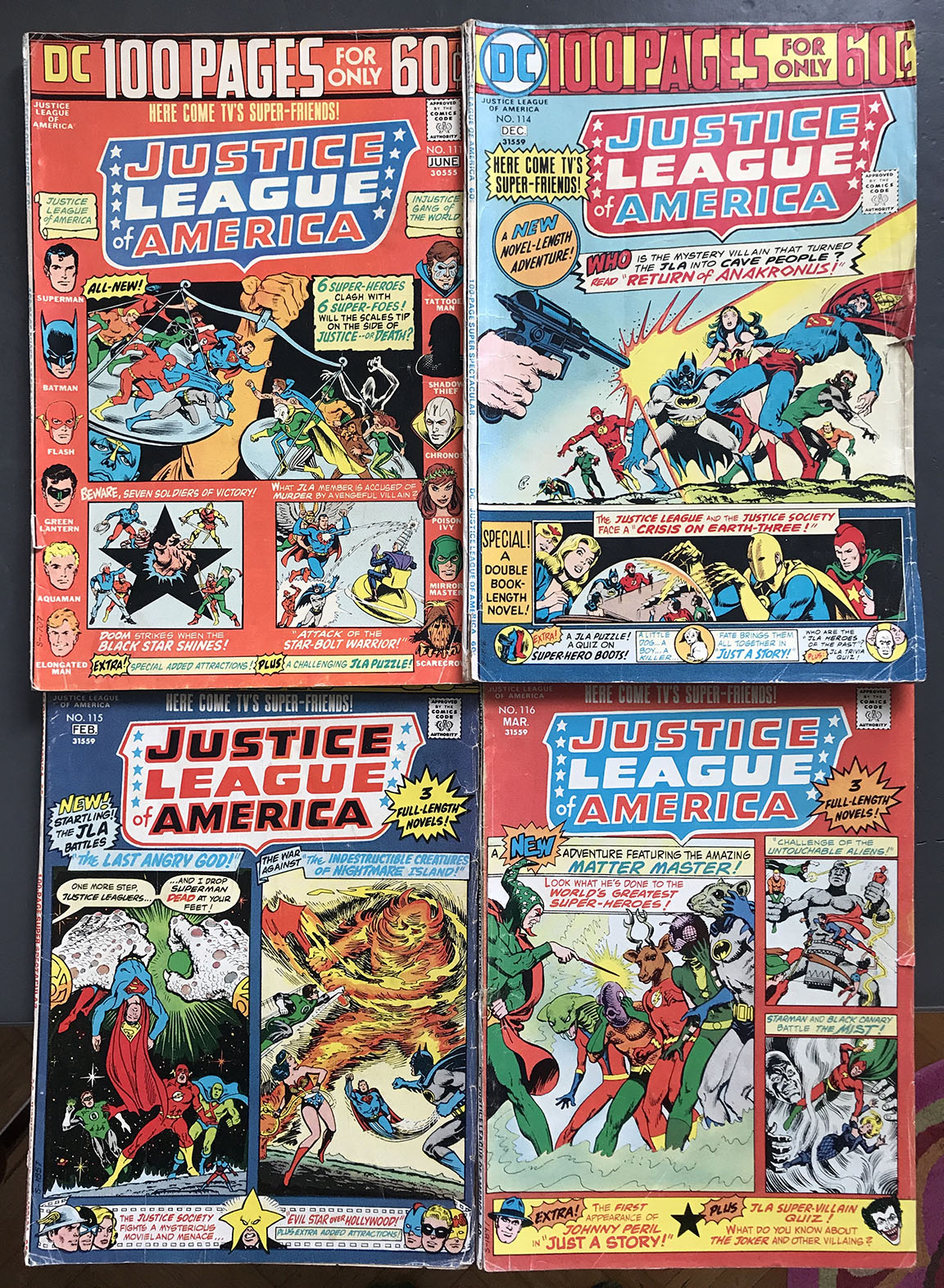 Issue #111 reprinted #32, a battle with Brain Storm -- not a bad adventure, it had its moments. Issue #115 reprinted #40, about a well meaning lama ghost -- it had a few interesting aspects. Issue #116 reprinted #15, a misunderstanding with stone aliens gave way to a looooong battle. Huh. Now issue #114, which reprinted #29, "Crisis on Earth-Three."  That was promising, I thought. Here we go... this is a classic tale of the classic evil doppelgängers, the Crime Syndicate! Plus the Justice Society America! But first, let's look at this unrelated spread: 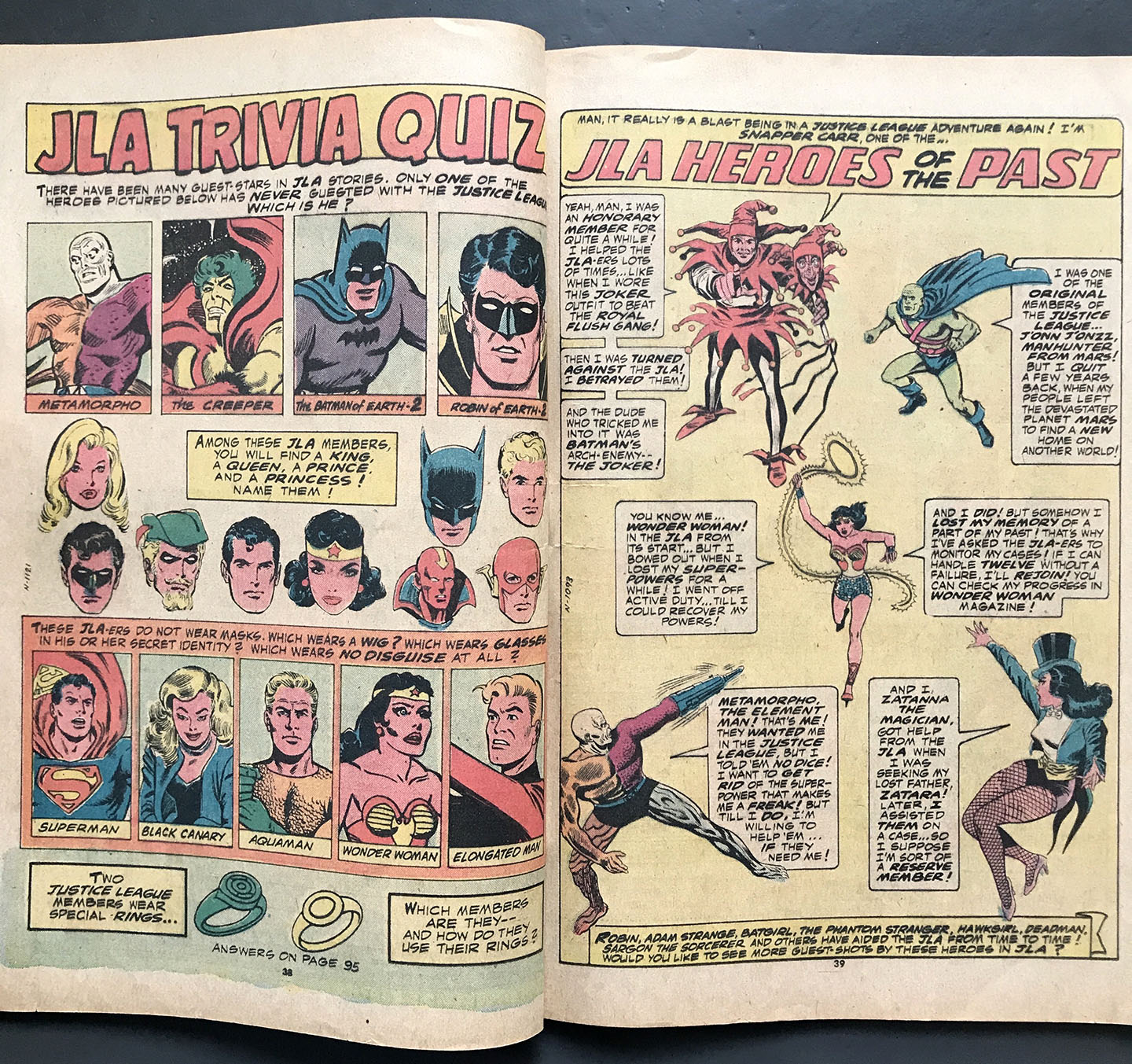 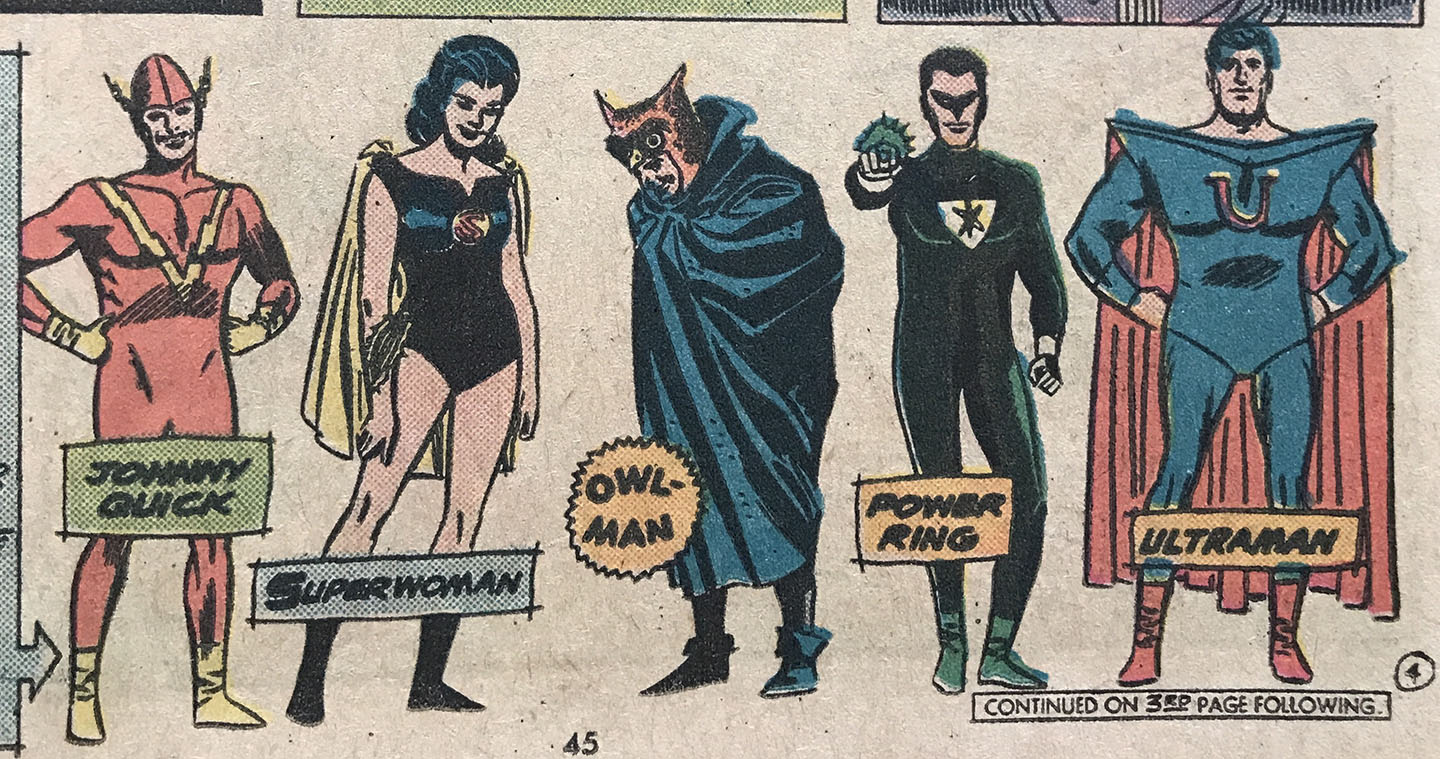 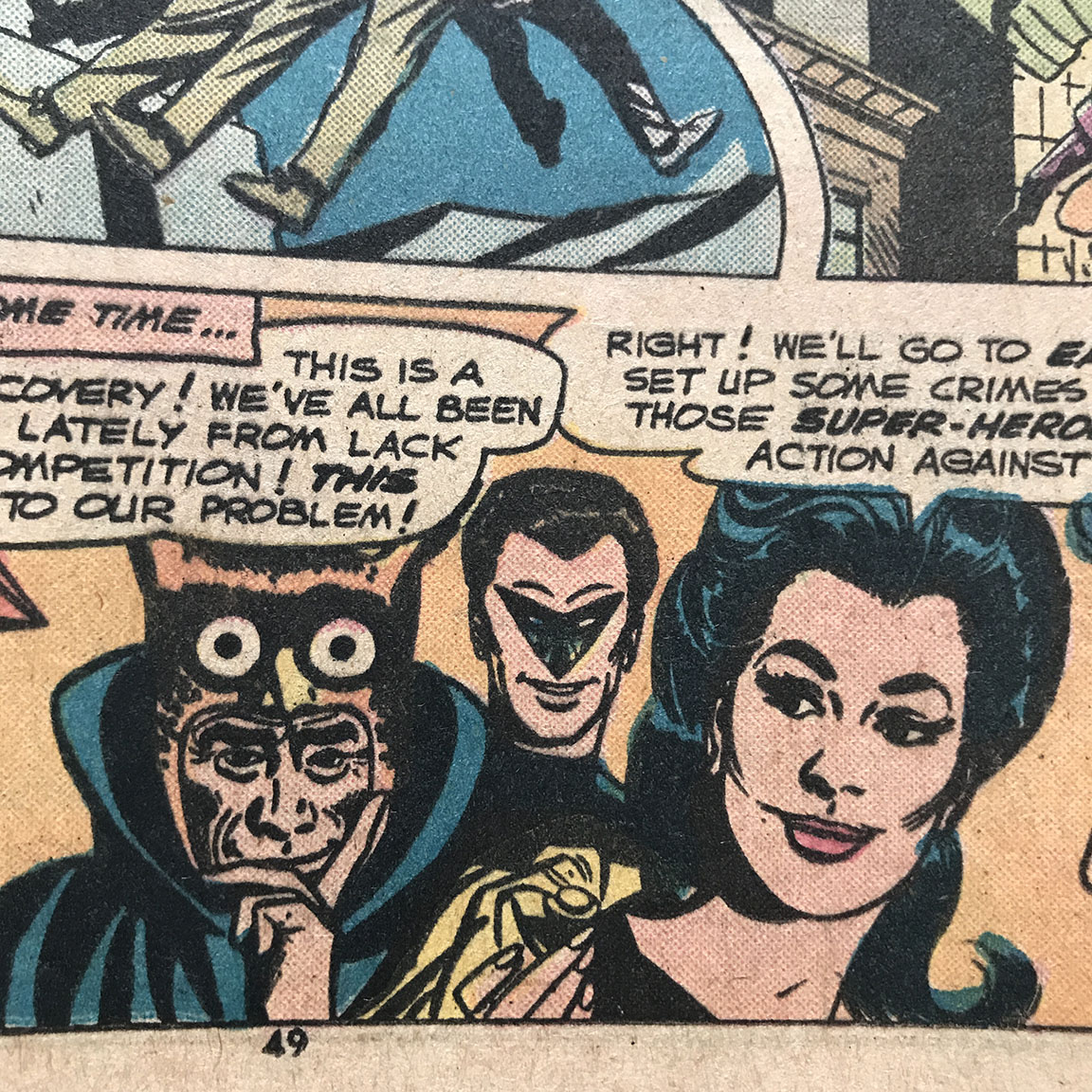 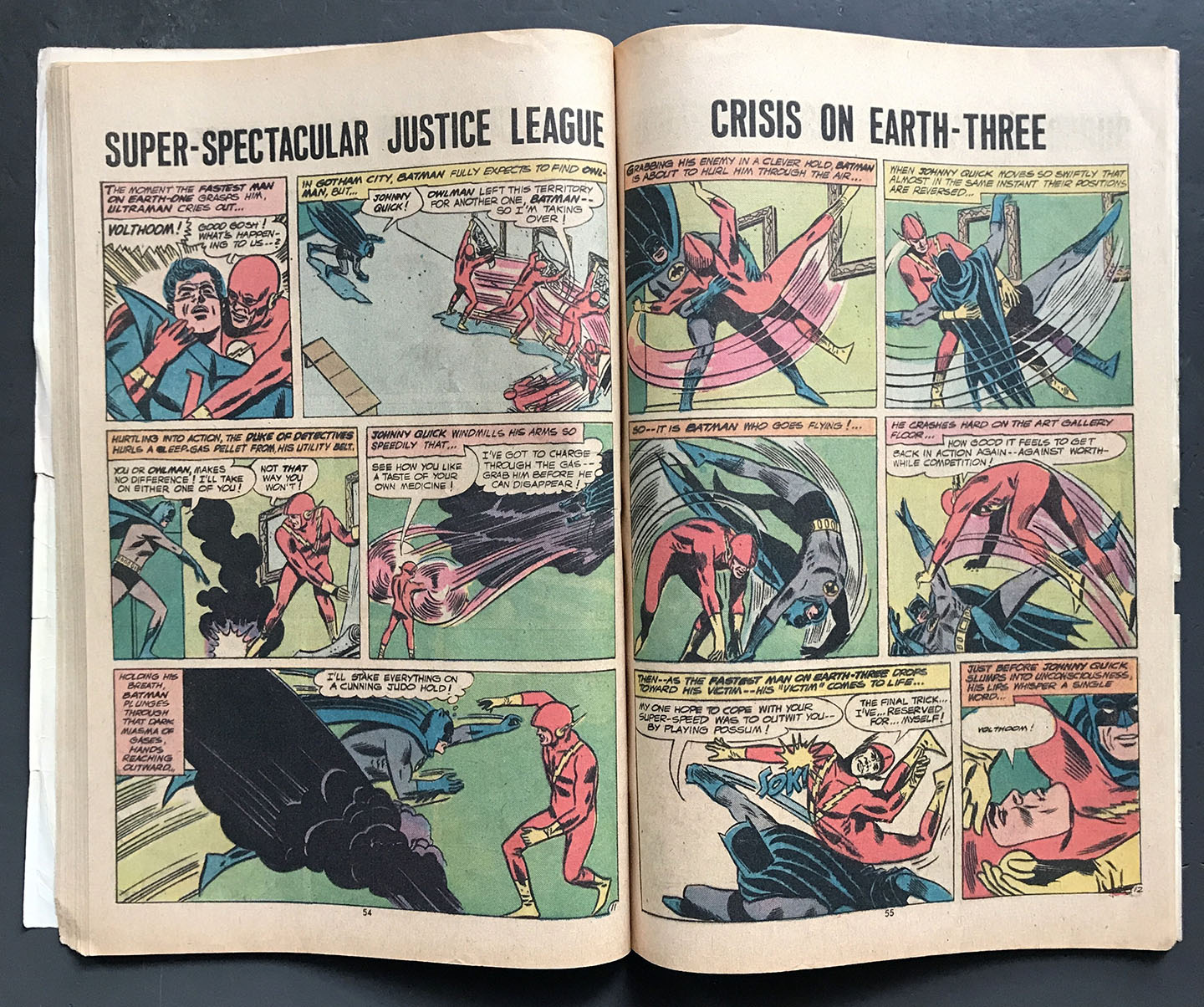 I was still stoked on page 12; by page 37, I was as exhausted as Mike Sekowsky. 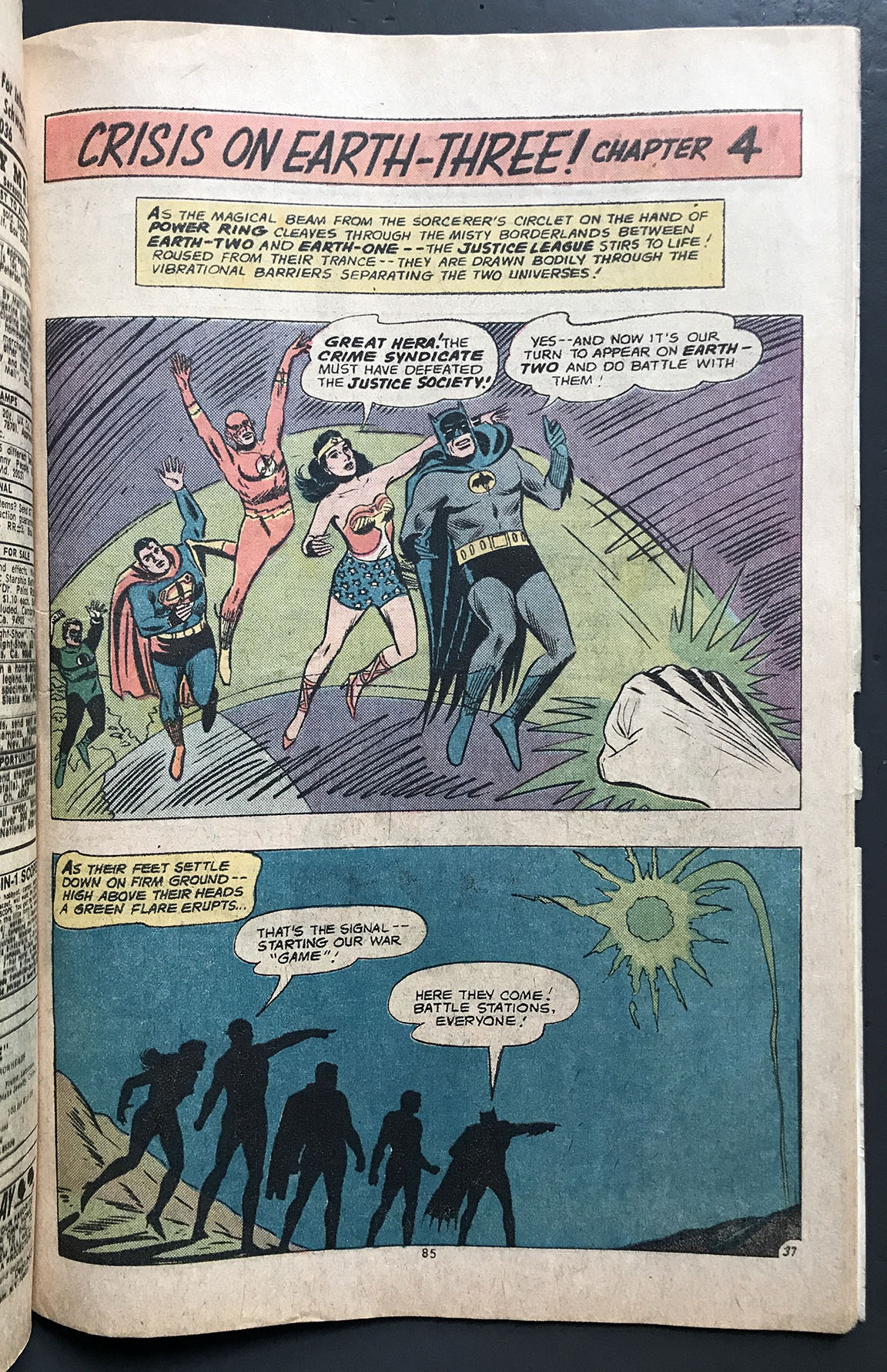 The art in all of these stories was fantastic. Where I once simply liked Sekowsky's barrel-chested, squat figures, I adore them now. I deeply appreciate his constant fitting crowded panels with even more characters. He was known for his speed, but there is sheer effort in all of these pages. Toth-level suit folds and silhouettes and old man faces everywhere. Inventive compositions, excellent staging, masterful cartooning -- it's all fun stuff to look at, but the stories are just too dry for me, the sameness is aggressive. The 100-pagers were still jam packed with entertainment, and lots of great Dick Dillin art over Wein and Denny O'Neil and Cary Bates stories kept me interested in these do-gooders.

I should mention that I'm talking about the two premier JLA artists of their times. Mike Sekowsky co-created the JLA with Gardner Fox in 1960; he drew a consecutive run up until #63 (1968). The baton was immediately passed to Dick Dillin in the next issue; he drew the title for the next 12 years with only one- fill-in. 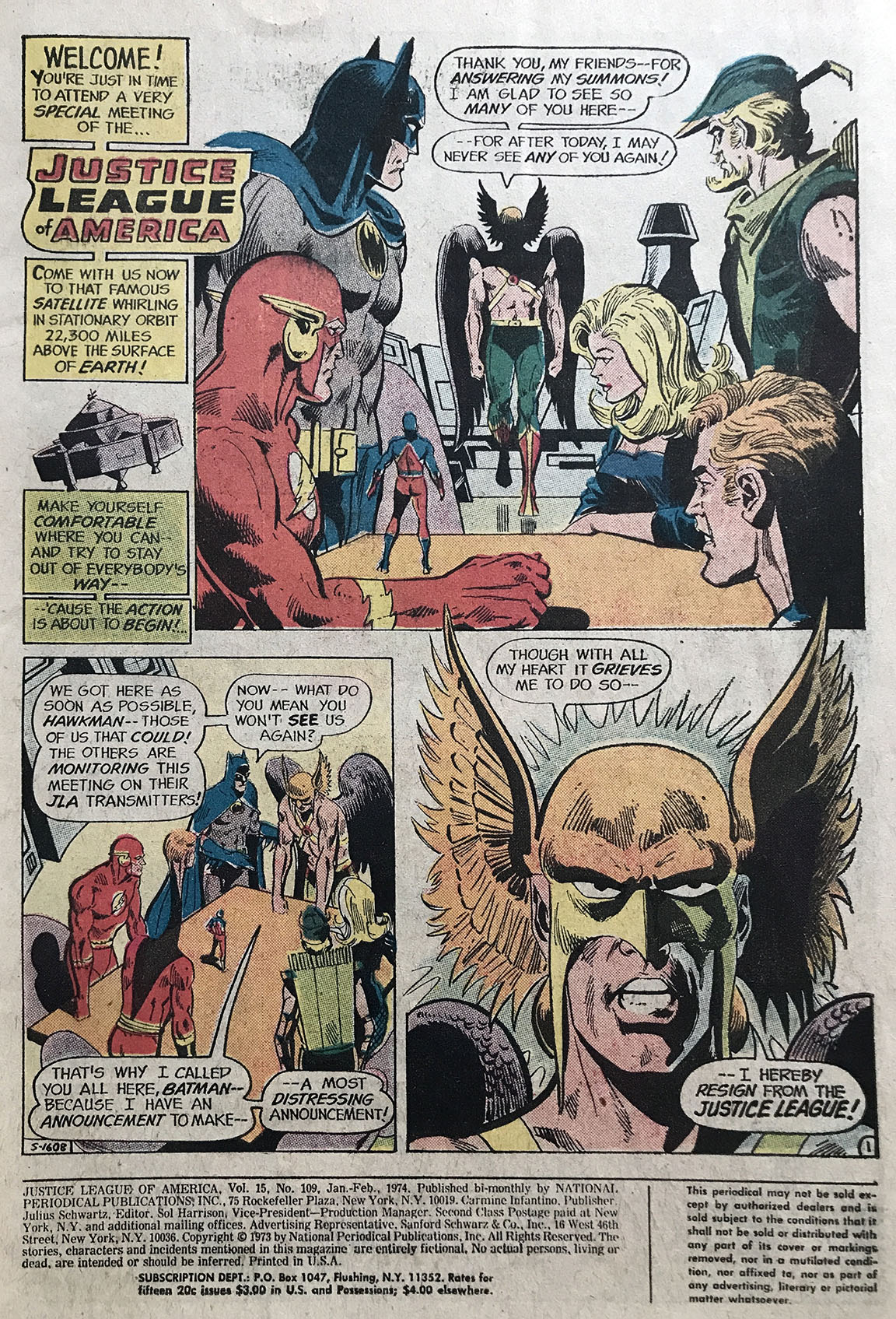 Dick Dillin's work gets better and better the more I look at it. It was downright elegant at times. In my Dillin appreciation, I caught the Justice League bug. I only owned and loved Steve Englehart's brief, never-been-reprinted run on the JLA, so in that short holiday period, I picked up any Dillin-era JLA comic I found based solely on whether I liked the cover or not. Simple enough! As long as I had a basic idea as to who the players were, I was set. They more than delivered. 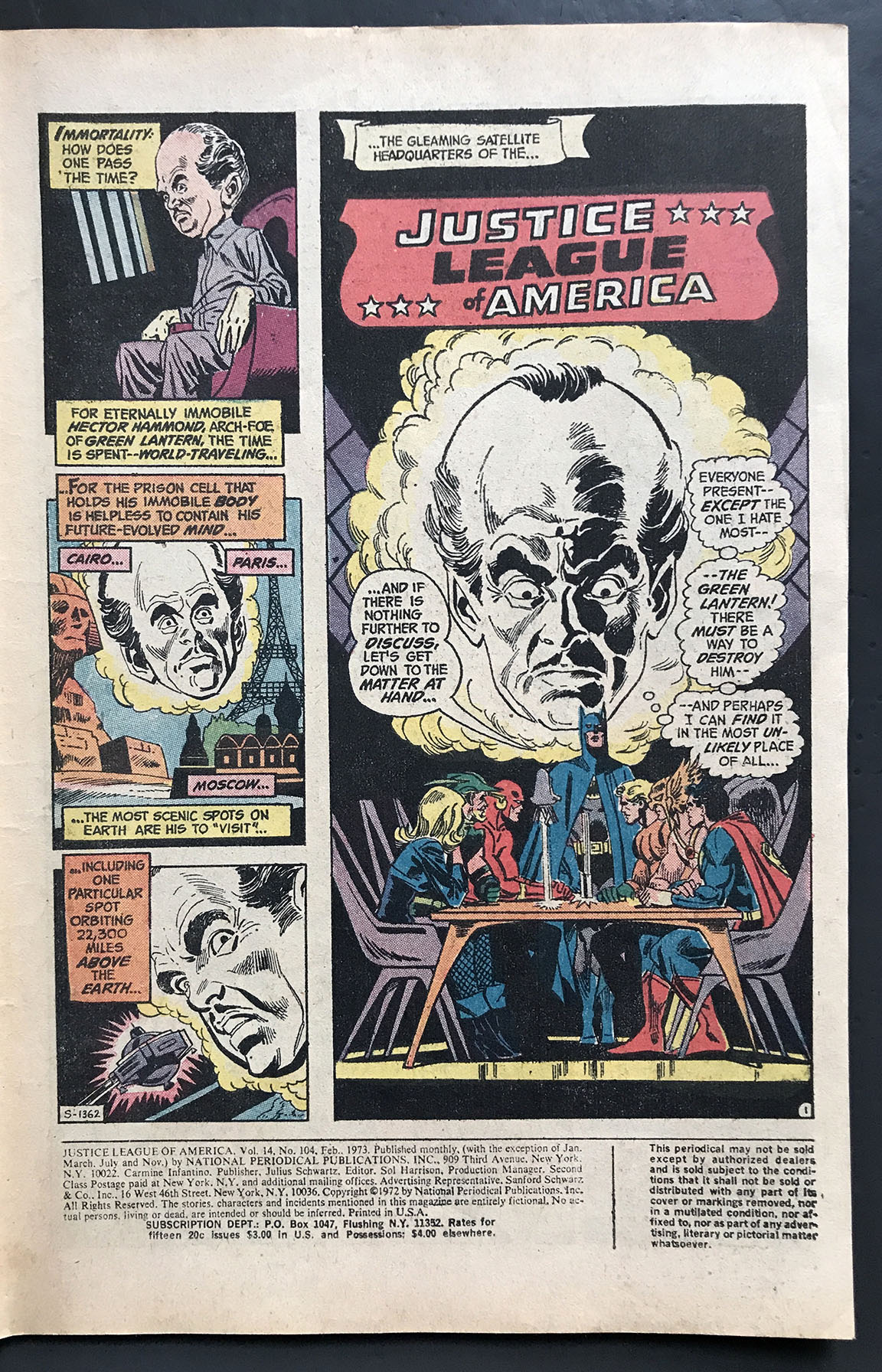 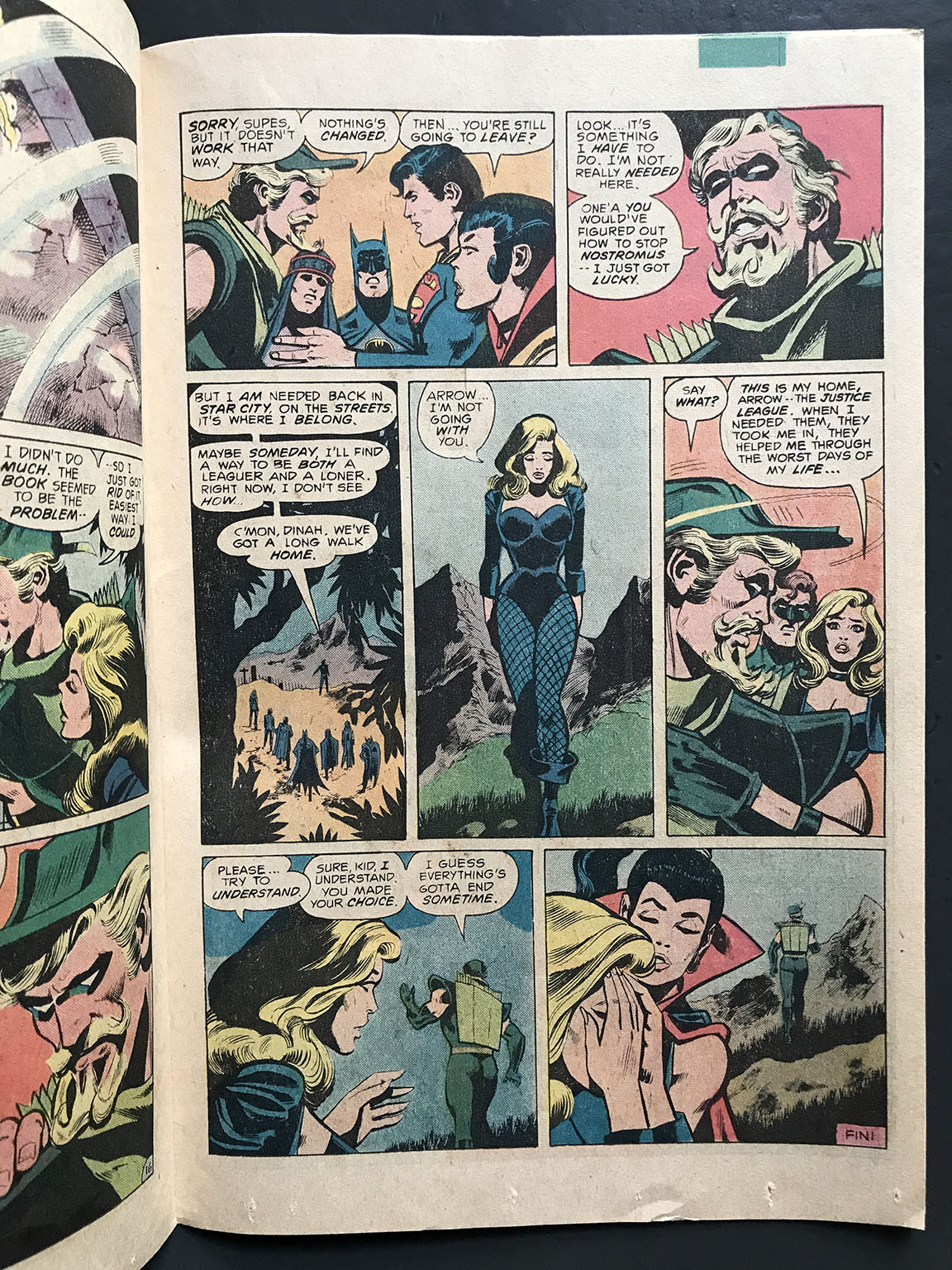 The Green Arrow page above  is from Dick Dillin's second to last issue before passing away in 1980. Mike Sekowsky drew his last Justice League of America story in 1985; he passed away 4 years later.

As for my enjoyment of these comics, the trick was to pace myself. There was no need to rush through a stack of this stuff. No point in applying modern day immediacy here -- that I learned last time with the JSA. Reading Roy Thomas taught me the advantage of telling a story like a map, and these Dillin-era JLA comics came from the same place. A lot of characters battled a lot of villains, improbable things happened to impossible people, a history of straight-faced absurdity left in the title's wake. Of course character development moved glacially; nuance was not what you came to this book for, you came to get your money's worth in super hero action. Green Arrow might drop a snarky remark here and there, but he's mostly in the thick of it. You like Hawkman? He might show up next issue, just wait a little. Big Wonder Woman fan? She gets her shot, too. They all do! And they're polite about it, they take turns, they're nice. This group, they're iconic role models who thrive on teamwork and behave and follow rules, they attend meetings and enact policies. Epic squaresville, motherfucker, and that's a beautiful thing. Justice League of America is the comic for the hall monitor who'll snitch on you without blinking. 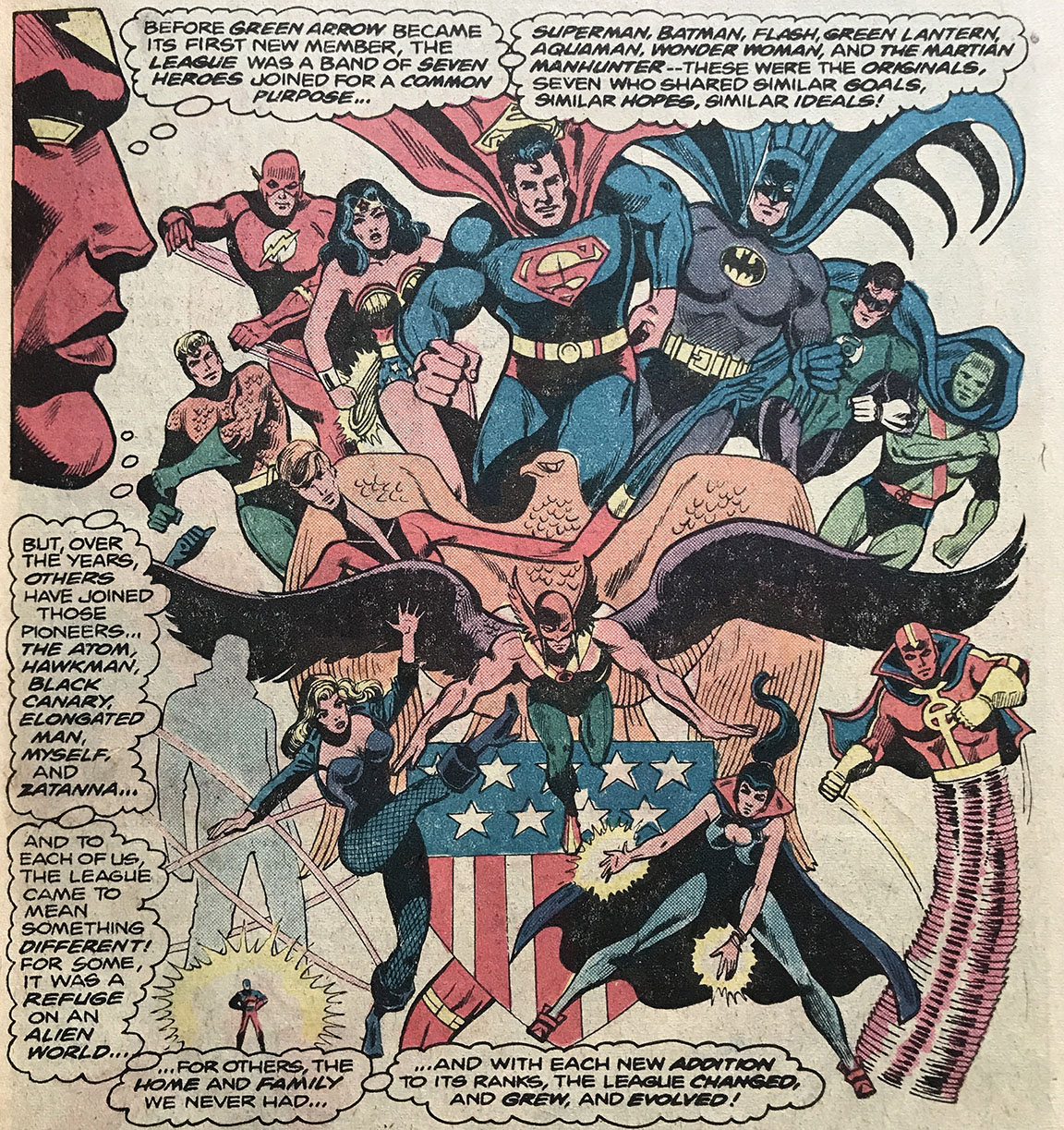 I don't care about the fascistic implications of super-powered people; that's a tired concept I can't believe people ever took seriously, that they actually got upset about the role of super heroes in the "real world"... good god. I just want the colorful drawings I look at to smile once in a while, that's all. Is that too unrealistic? The JLA gives me that. 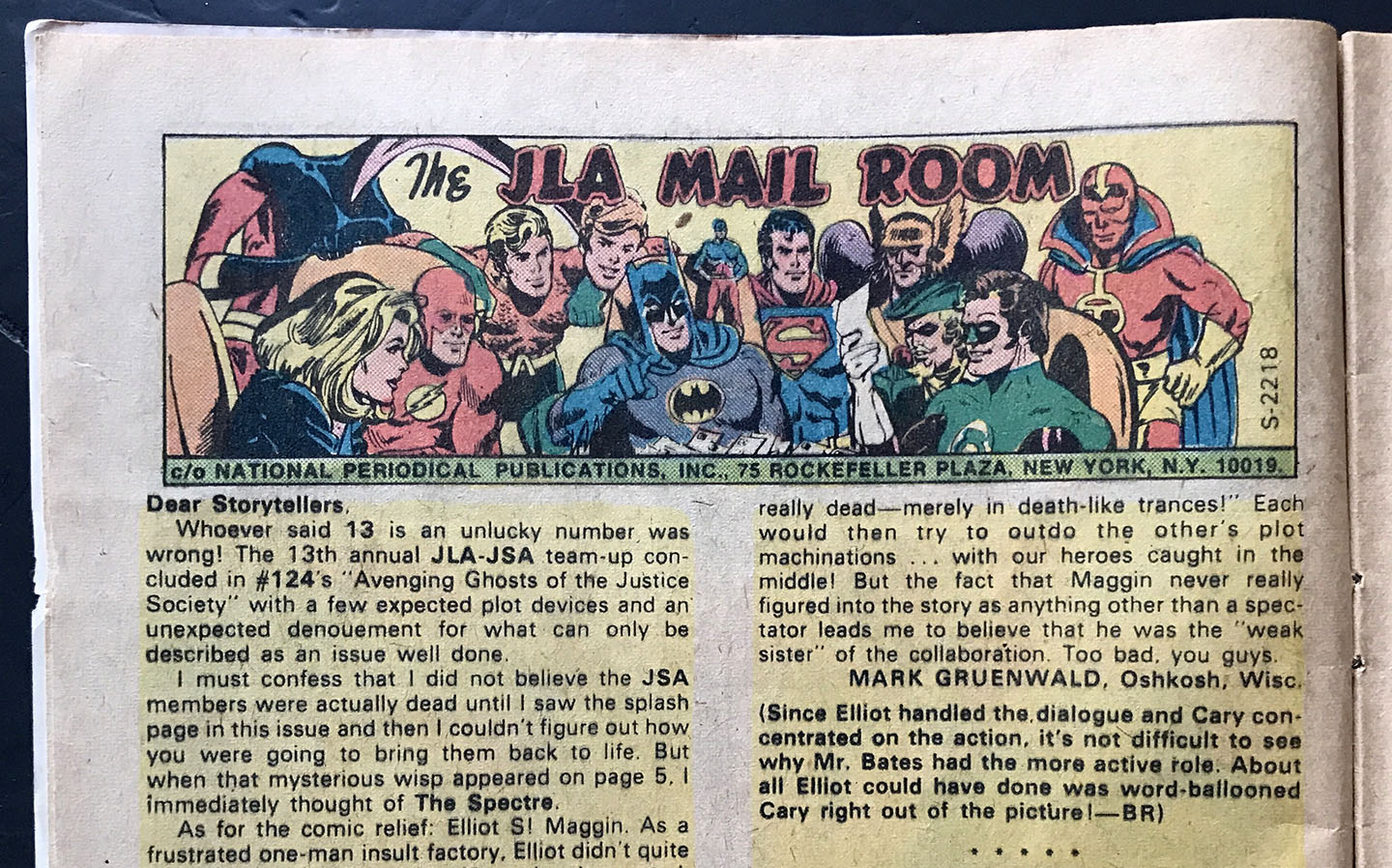 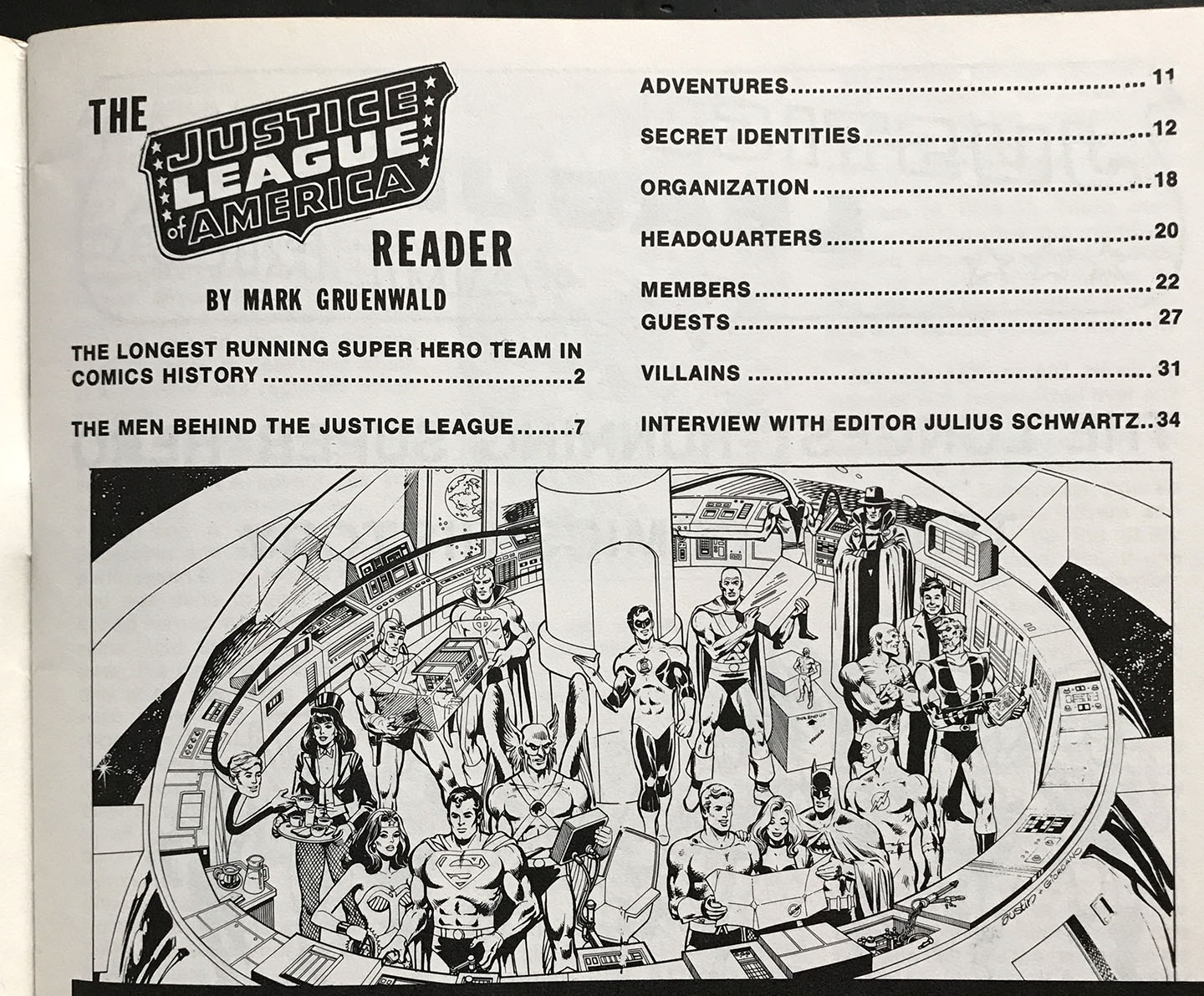 You know what else the JLA gave me? An understanding of Mark Gruenwald that was heretofore absent. The comic book checks and balances, the organization and attention to detail, the nutty concepts that border on dull nonsense. I suddenly got the appeal, I got why one of my favorite writers was "a DC guy". It helped that the comics were drawn by two actual DC lifers. Mike Sekowsky and Dick Dillin had style and foundation, they were consistent and reliable artists in an era when companies valued that over everything else. JLA writers came and went with their beautifully bizarre horseshit stories while these two dug their heels in and drew them. Workhorses is the term that gets thrown around, but those men fed their families on the fumes of fandom's loyalty to the DC brand, and DC kept them in the running with their flagship title, The Justice League of America. 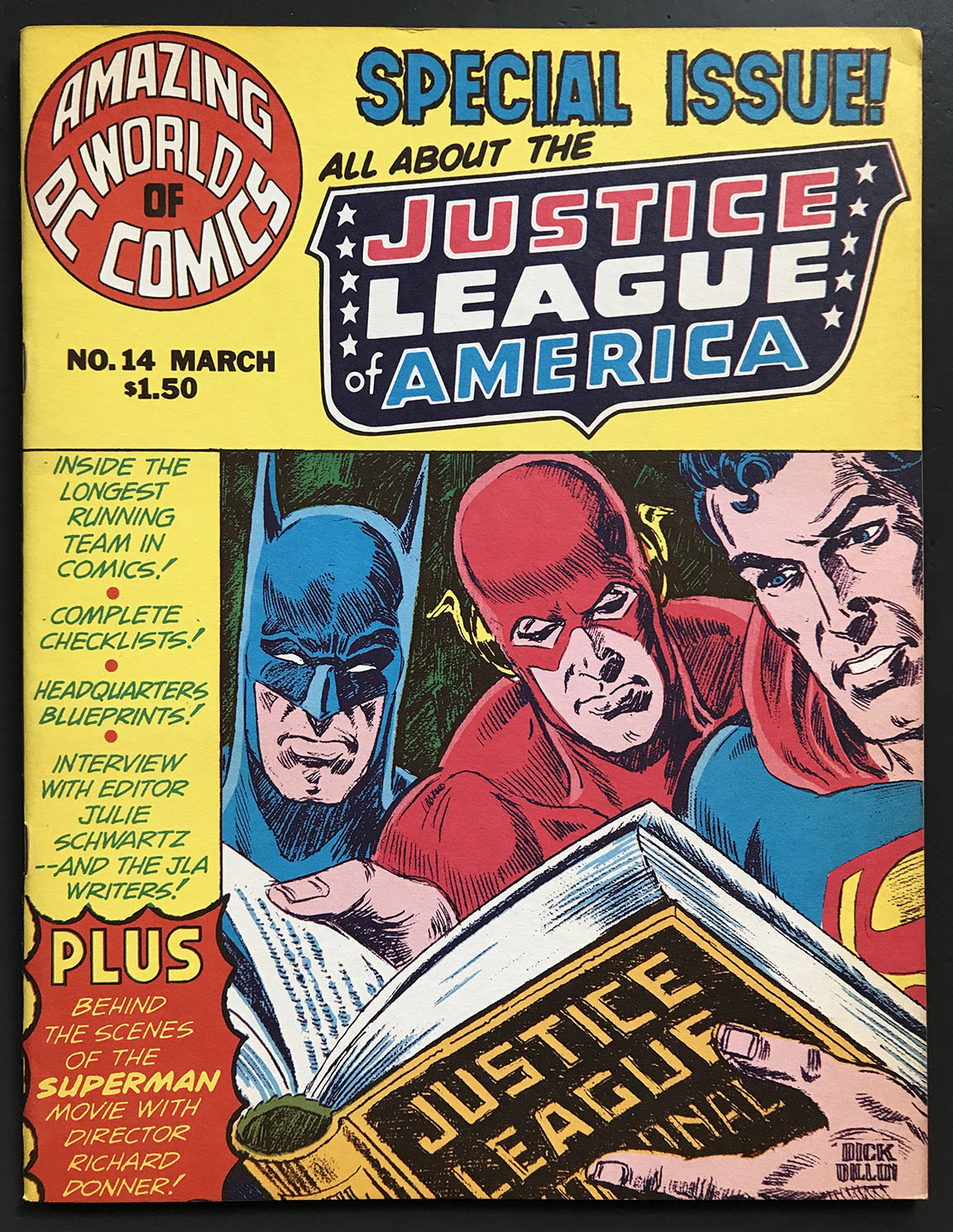 On the next OVERWORD: Squadron Supreme as a vehicle for profound expression. 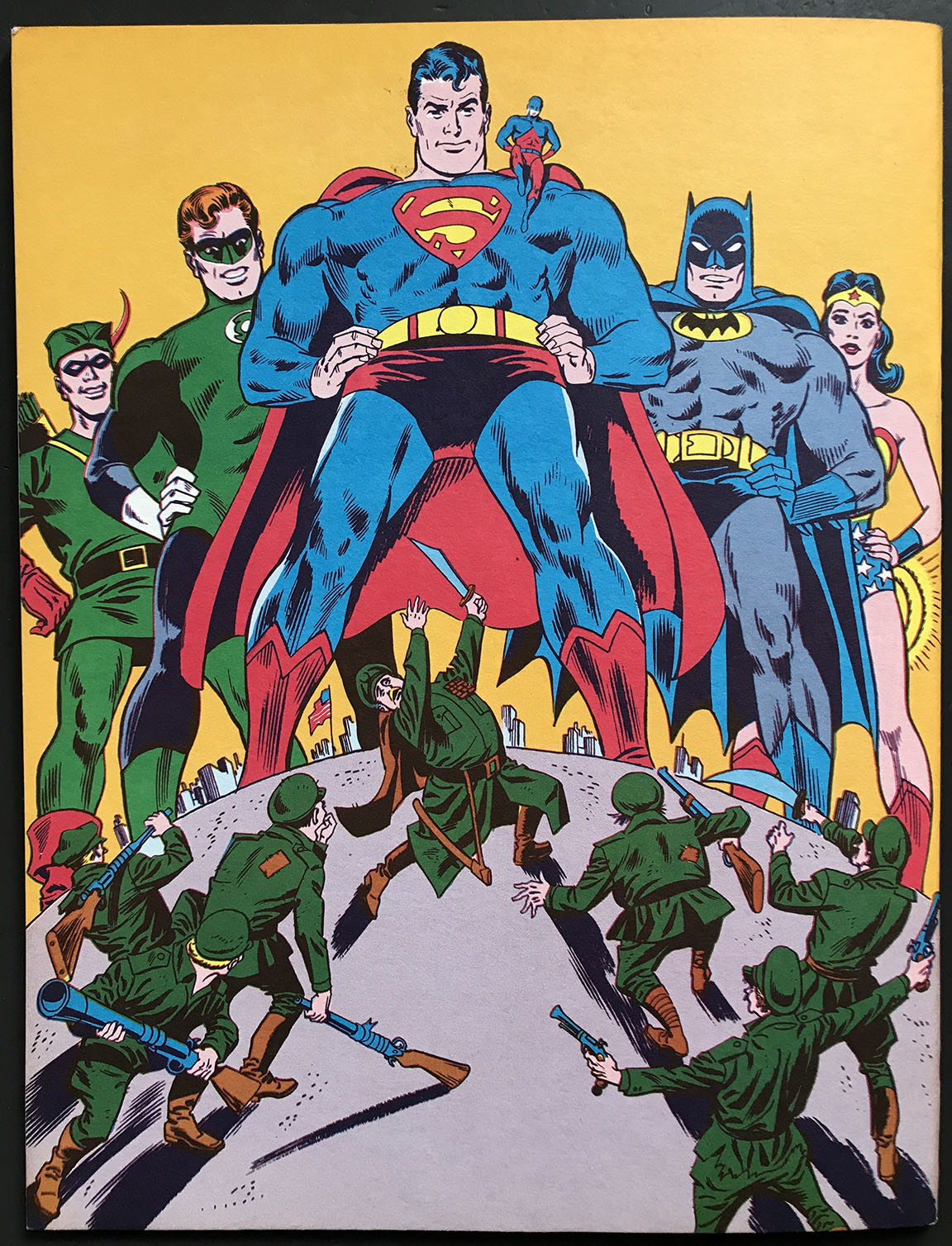