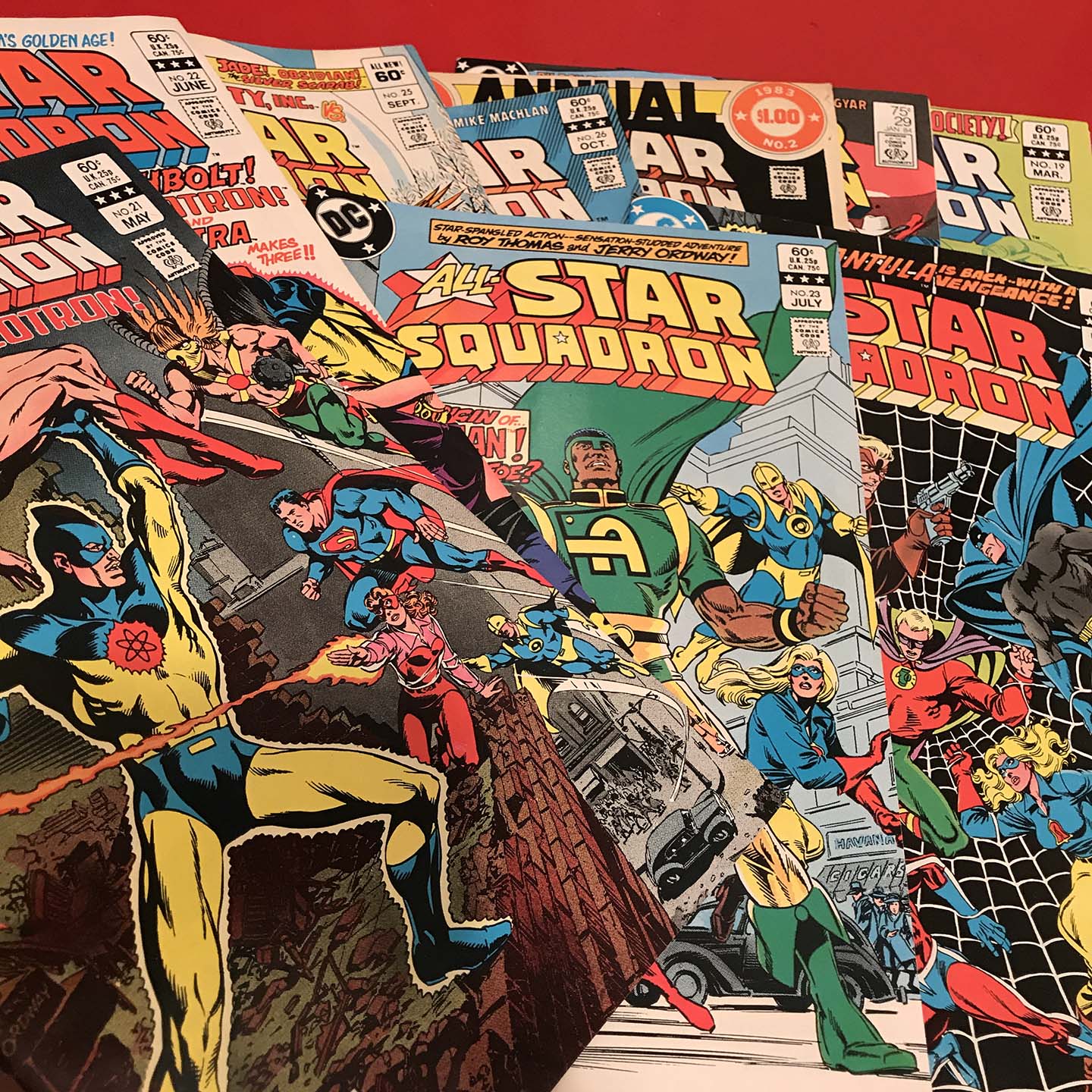 Let’s call it “X-mas Break”. Just last year, as of this writing, I spent a handful of days out of town and at the in-laws’ house. I always look forward to rummaging through their local used bookseller’s comic book bins, not really on the hunt for anything specific but armed with a general sense of what might satisfy me at that very moment... perhaps something to read on a whim, to maybe even enjoy. There were three pivotal comics amidst my “X-mas Break” findings. They all connect, but I’ll focus on only one of them right now. It's the one with a Jerry Ordway cover that I've always liked from a distance, never coming across it in the bins. My luck changed this past holiday. 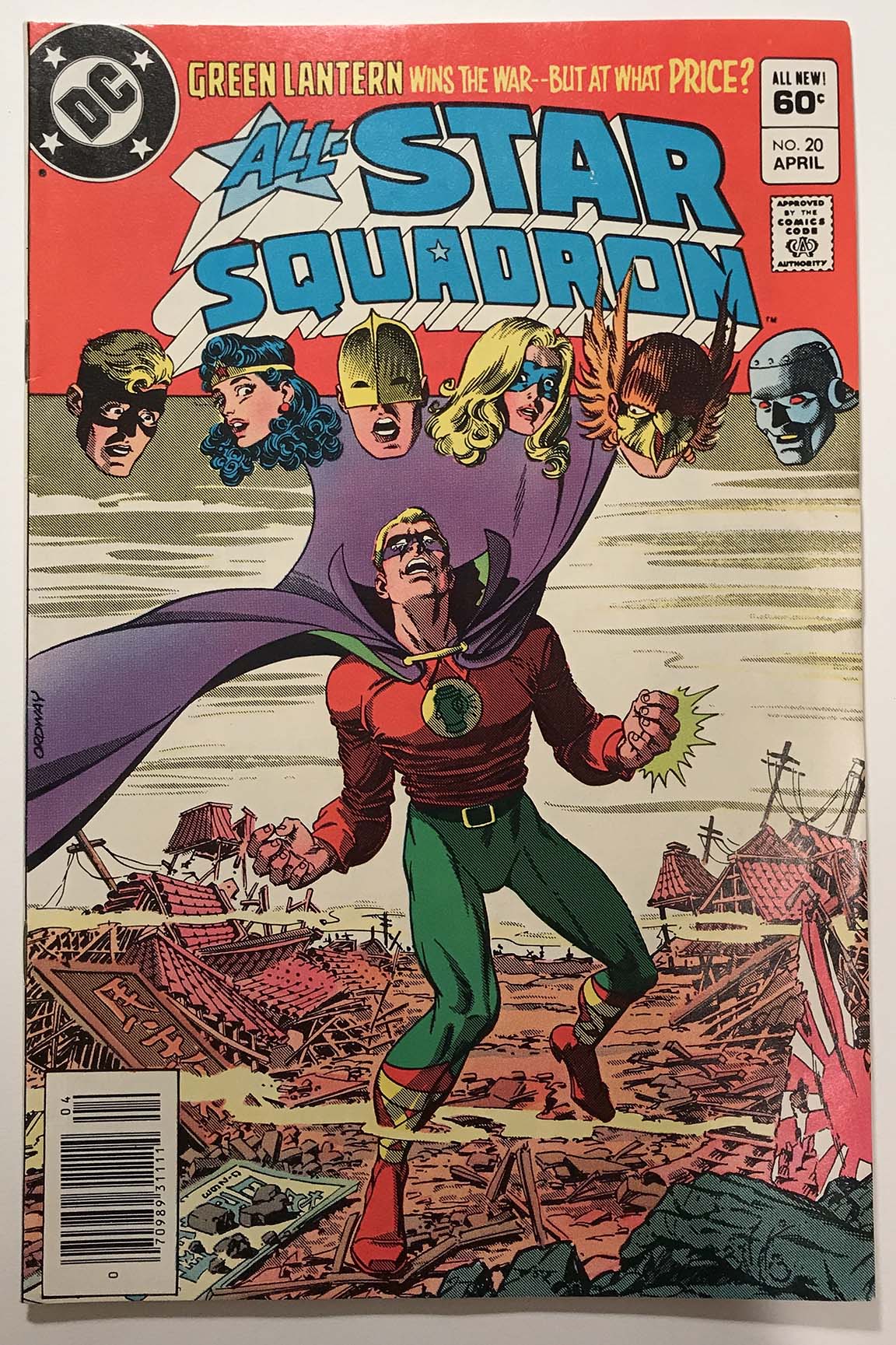 Before getting into it, I should admit up front that Golden Age superhero stories (comics from the 40s and 50s) don’t do it for me. I like the way some of them look, and I appreciate where they come from (working class adults and teens churning out material for a new medium), but I can’t read those things. I see them as artifacts, not sources of entertainment. Those comics were made on some faraway planet, long ago, before time existed. Somehow, the poster children for this era were in the back of my mind: the Justice Society of America.

They’re like the Justice League but... well, older. I never connected with them, never found them particularly interesting. The JSA has always been a pack of fuddy duddys, old dudes in tights talking about the good ol' days in radio voices. Too much yellow in the costumes, know what I mean? All it takes is that superficial of a reason to seal the deal. I had a few issues of All-Star Comics drawn by a young Keith Giffen and inked by Wally Wood that were nice to look at. I sort of liked this one juvenile delinquent story that I read as a kid, but I much preferred the 8-part run written by Len Strazewski and drawn by several solid artists -- Rick Burchett, Tom Artis, and Grant Miehm -- in 1991. The following year, Strazewski wrote an ongoing series drawn by the late, great Mike Parobeck and inked by Mike Machlan; that remains my favorite JSA material, solely based on the power and charm of Parobeck’s art. It’s been decades since I read 1993’s Golden Age by James Robinson, Paul Smith, and Richard Ory, but I recall it being pretty fun for a post-Watchmen project. And that’s it for me and those old coots. 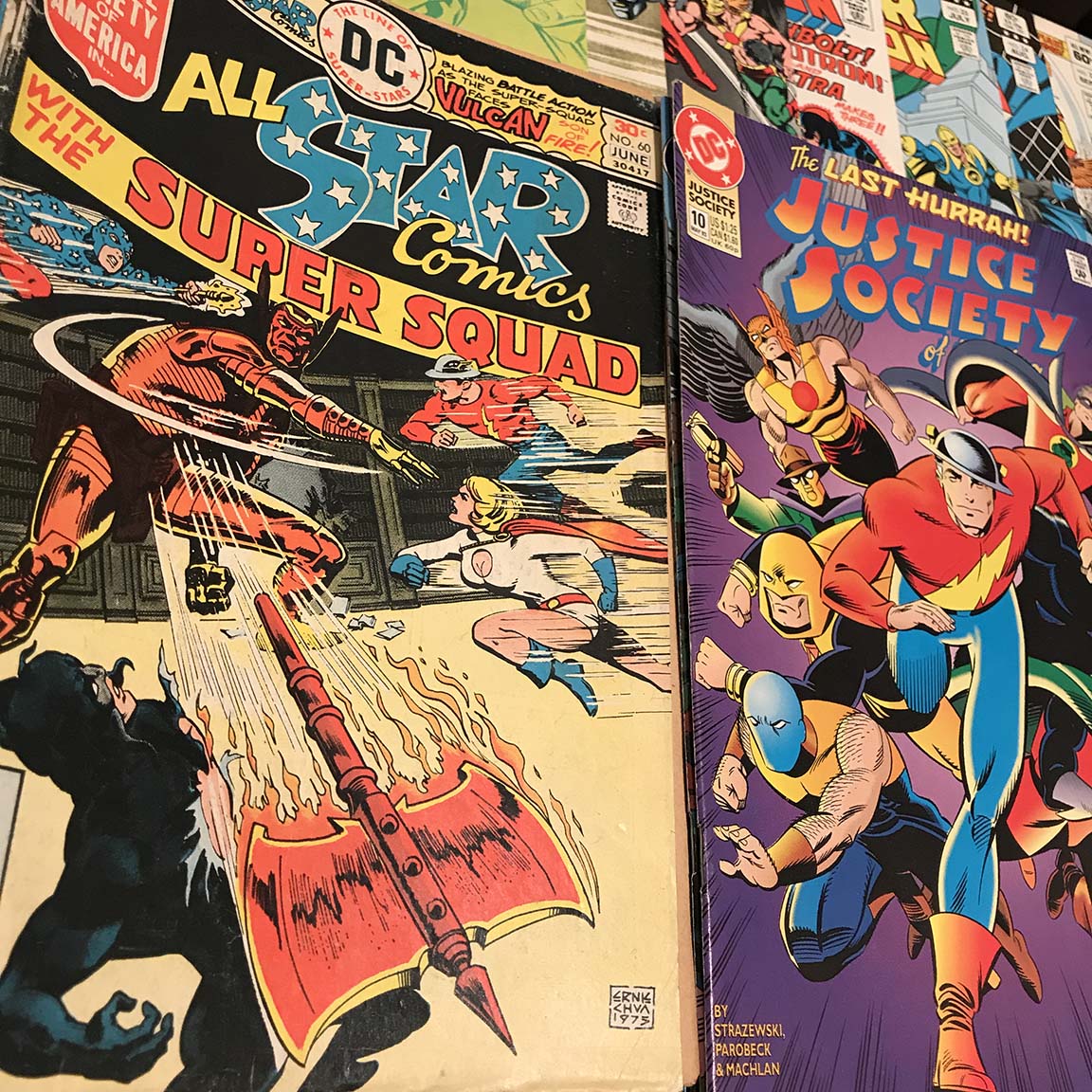 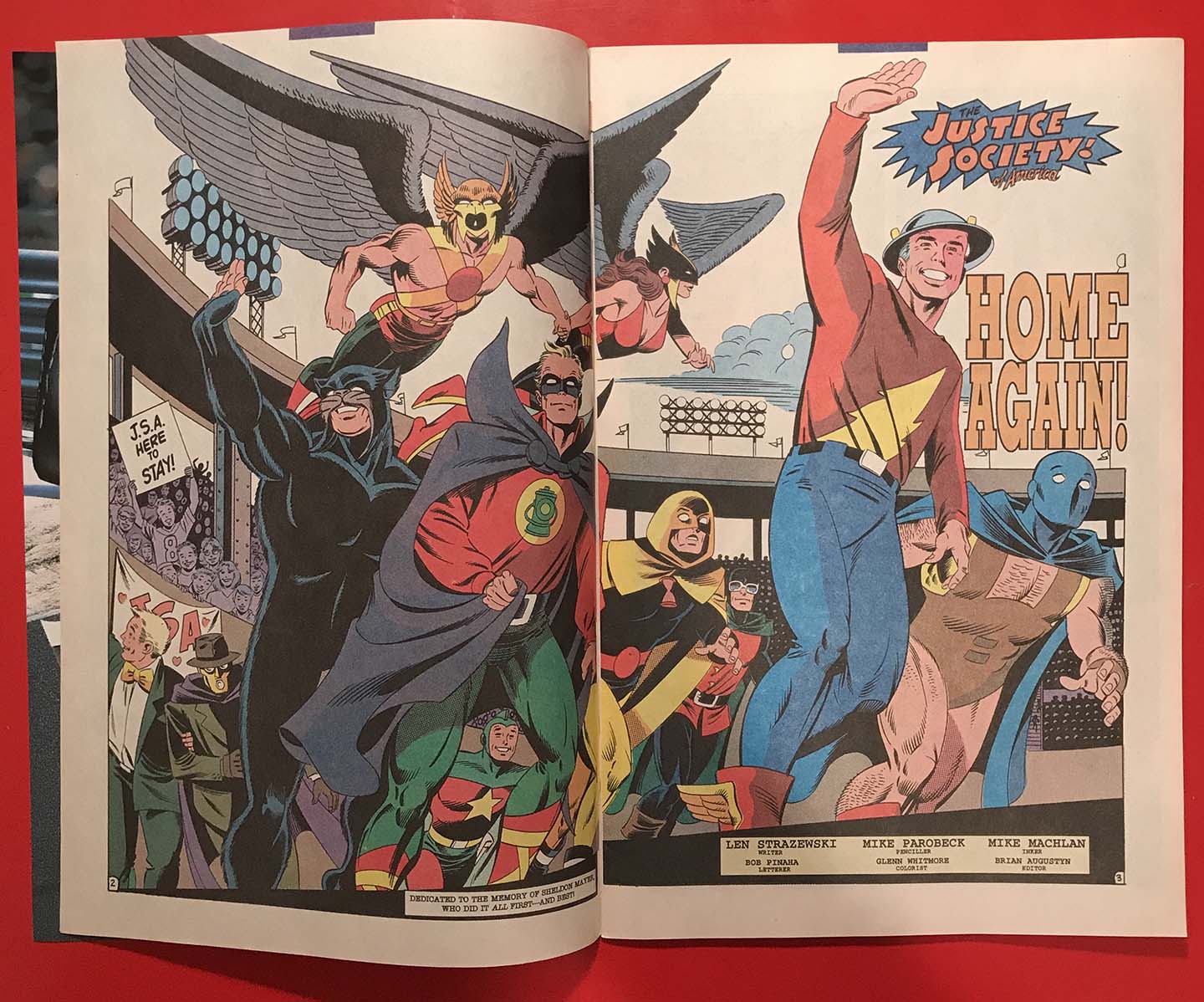 Just to be clear, the JSA and the All-Star Squadron are almost identical to me. It all deals with the same pool of characters and concepts. Throw in Infinity Inc. and Young All-Stars in there while you're at it. (I gave Infinity Inc. a shot years ago because of its relation to both Jerry Ordway and Todd McFarlane, but it didn't stick.)

And that juvenile delinquent story I mentioned? It mostly features a bunch of poor kids and hooligans fighting in NYC alleyways and junkyards. I can't not like it.

Roy Thomas. That’s the name I associate all those properties I just mentioned with. I could never penetrate what Roy was going for. His Marvel work was cool, but his fixation with the Golden Age made zero connection with me. Our interests weren’t compatible, it seemed, and the way he presented the material left me cold. So not only were these characters super homogenized (all that yellow--!), but they walked and talked like interchangeable mannequins. Every Roy Thomas page was full of comics trivia I had no interest in pursuing. JSA and the like just weren’t for me. I moved on. 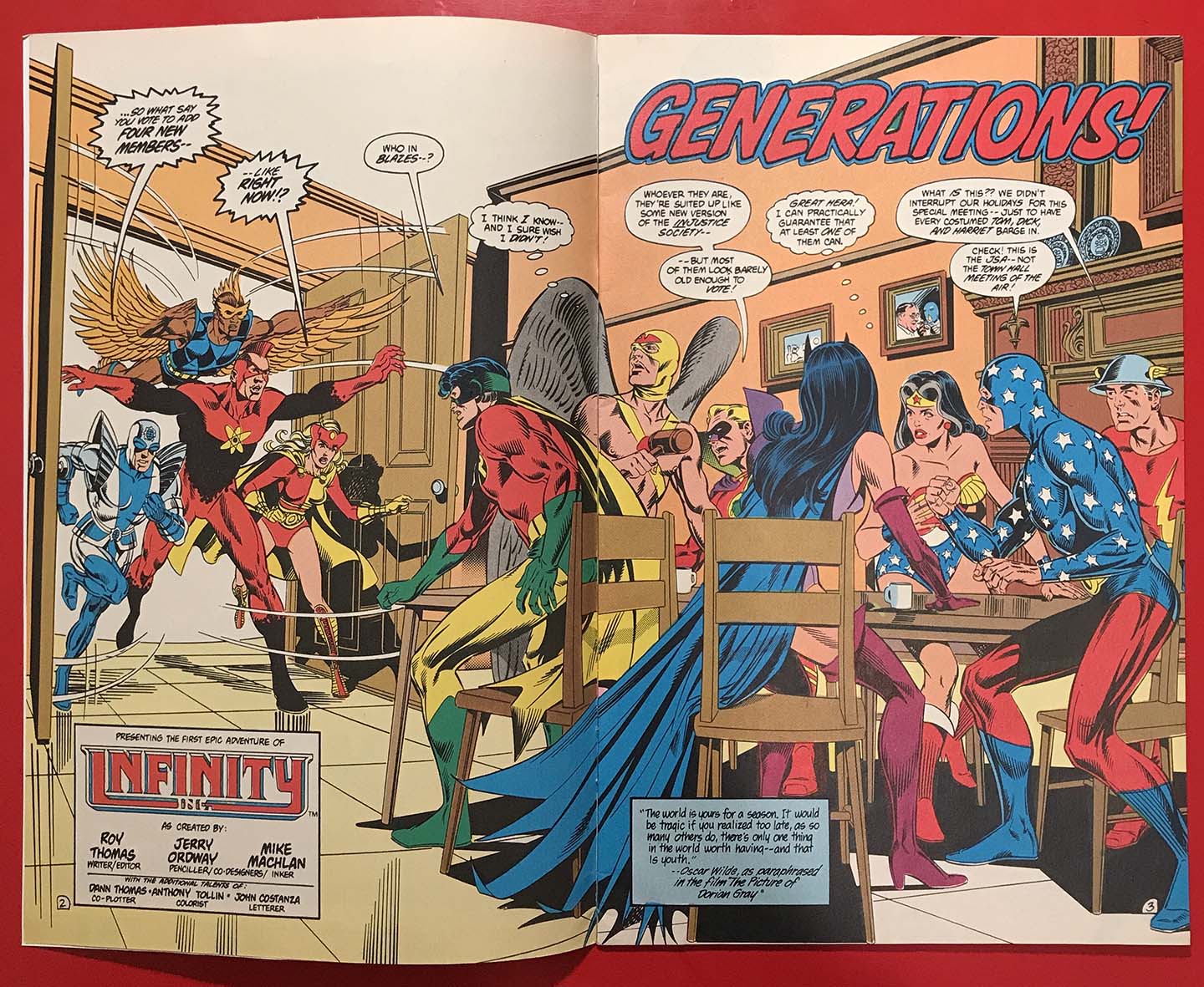 I wasn't going to let a little thing like absolute disinterest stop me, though. Okay, so my four-color requirements weren’t precisely met; after I blazed through the 80s Teen Titans franchise (See: OVERWORD 1), I was exhausted but still open to engage with hopeful alternatives. I also happened to be listening to peripheral shows hosted by podcasters I loyally follow. In this case, it was Michael Bailey’s Tales of the Justice Society of America podcast, co-hosted by Scott H. Gardner. Bailey’s enthusiasm is usually infectious, so I thought I’d give this JSA show a try. Their general take is more reverential to the JSA-mythos, they’re into the legacy aspect of these properties. (An aspect DC Comics has excelled at.) Bailey and Gardner’s relationship to these characters is akin to that of lifelong friends who you stick with through thick or thin. These friends might go through ups and downs (shifting creative teams) or completely go AWOL (cancellation, no renewal), but the fans are there no matter what. It’s a trait I admire. The closest the podcast got in describing the JSA’s core appeal was when co-host Scott noted that because these stories took place in a different timeline/reality, all bets were off and anything could happen. One could apply that to any timeline, really, but I gave Scott the benefit of the doubt and kept the JSA in the back of my mind. 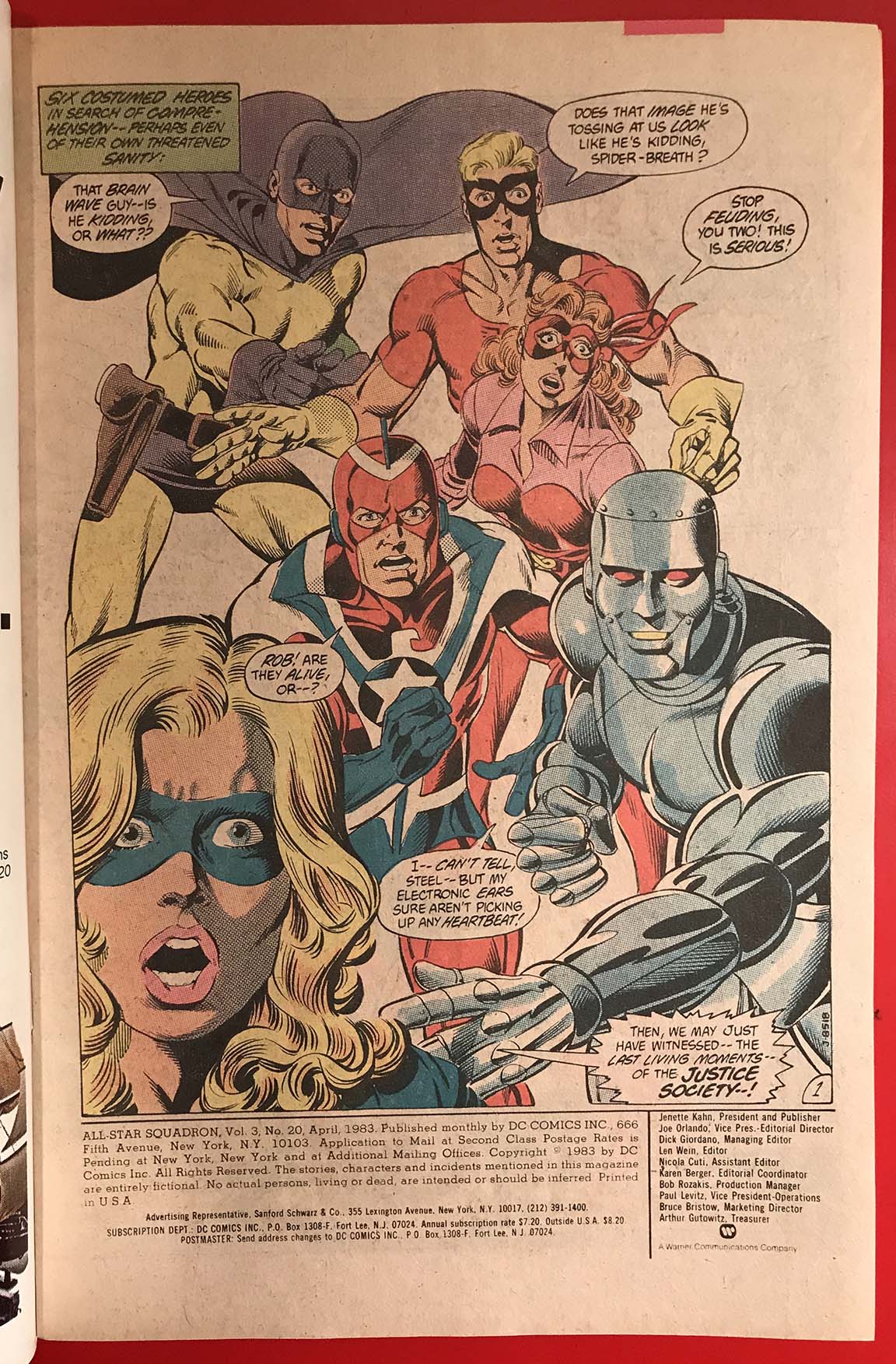 All-Star Squadron #20, published in 1983, written by Roy Thomas and drawn in full by Jerry Ordway, was awesome. This comic read like inside baseball but somehow it didn’t bother me or leave me confused. It just added to the richness of the tale. It was like someone excitedly telling you a story but you don’t catch a few words here and there yet you don’t stop them, you don’t interrupt the storytelling current. You go with it, embrace it, drink it in. Not everything had to be explained, and yet, paradoxically, here was Roy Thomas explaining everything, not leaving one single detail behind. This level of transparency clicked with me, and I think I know why.

Thomas’ attention to detail is exceptional, but I won’t pretend that the appeal isn’t for selfish reasons. I was working on a project that had me looking closely into the plot points of older comics, their dangling story threads that needed to be tied up, and their vast array of characters that I wanted to utilize. That sort of puzzle fitting is note-for-note what Roy Thomas has made a career of doing, and I’m right there with him. I have that fanboy obsession coursing through my veins. 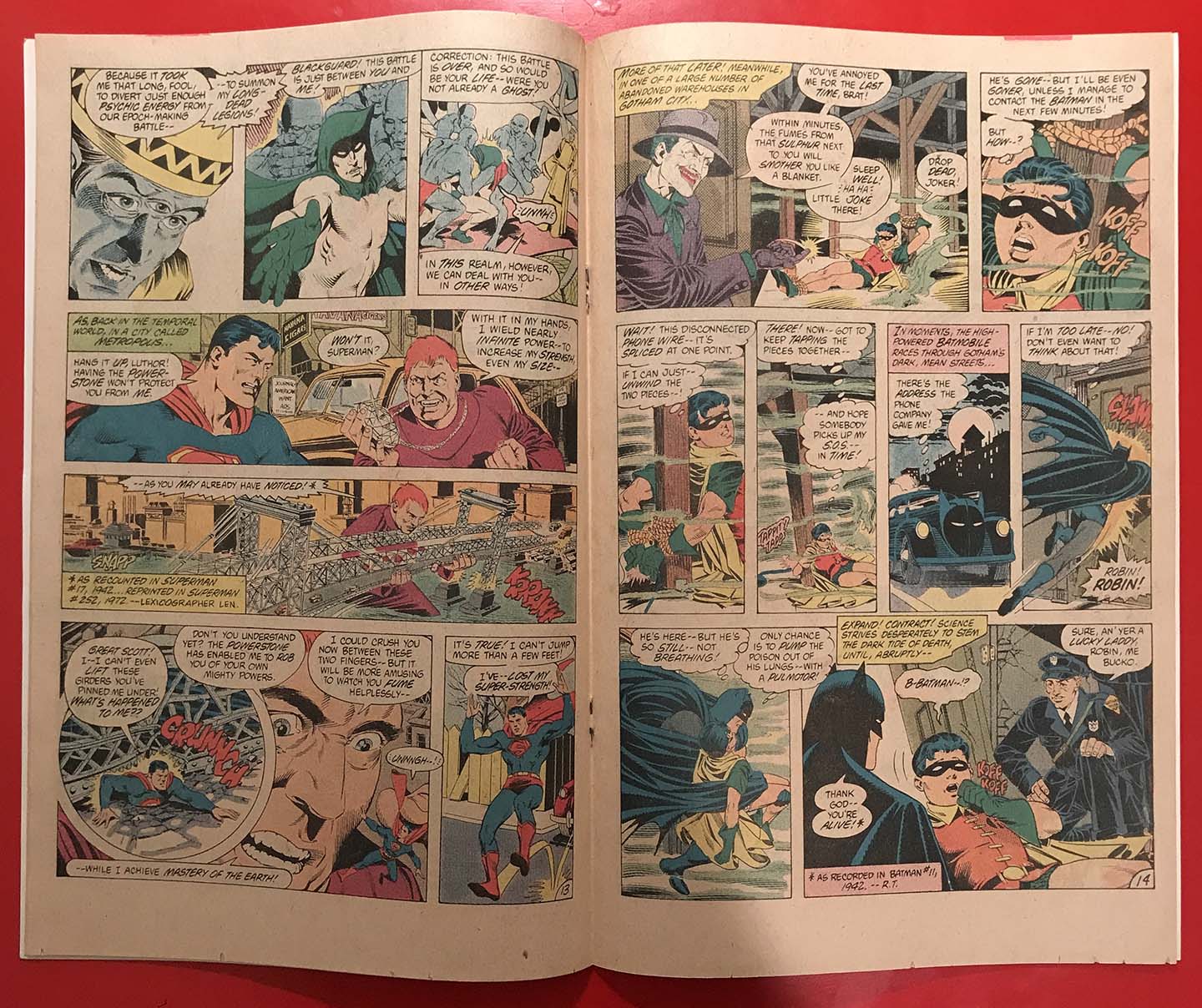 This is all still from that one issue, #20. It made me see "the page" differently. I didn't look at it with the expectation of natural transitions and "realistic" dialogue, I saw it as a map of information. Some of those panels are stuffed to the gills with characters in motion, bumping into one another, spouting battle cries and plot beats with identical vigor. Little of it makes sense -- visually or narratively -- if you apply a traditional read.

One has to step back and look at the whole and absorb it as that very same whole: the captions, the balloons, the bodies, the editorial notes, the titles, the backgrounds, the colors, the ads, the newsprint... you read it all at once. That is the experience. That's Roy Thomas trying to replicate the feeling of sheer information being wonderfully jammed into our young brains. 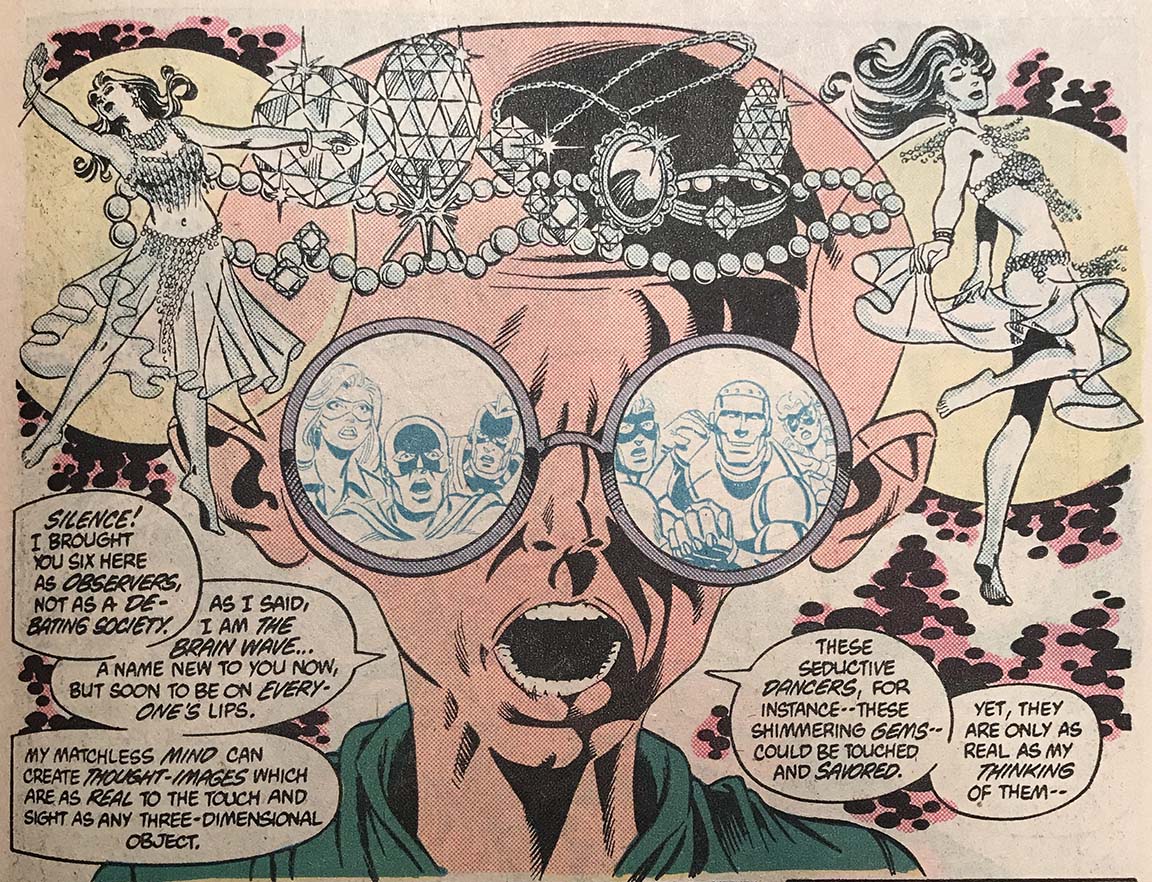 I knew Roy Thomas was an active force in fandom (notably via his stint on the Alter Ego fanzine) who made his name as a Marvel Comics assistant/editor/writer, and I remembered how he routinely plucked obscure characters from the Golden Age to re-introduce/spice up/modernize. (See: the Vision.) It was a trick Stan Lee sometimes pulled. (See: Fantastic Four). Unearthing and connecting threads, Roy was good for it. By the time those Ordway All-Star issues came out, Roy had been two years into his new stint at DC Comics, where he was basically given an entire timeline (Earth-2) to play with and was largely left alone. Imagine a fan-creator at the peak of his powers, given access to an entire library of characters and the freedom to cultivate them. No wonder this thing reads like a fever dream. 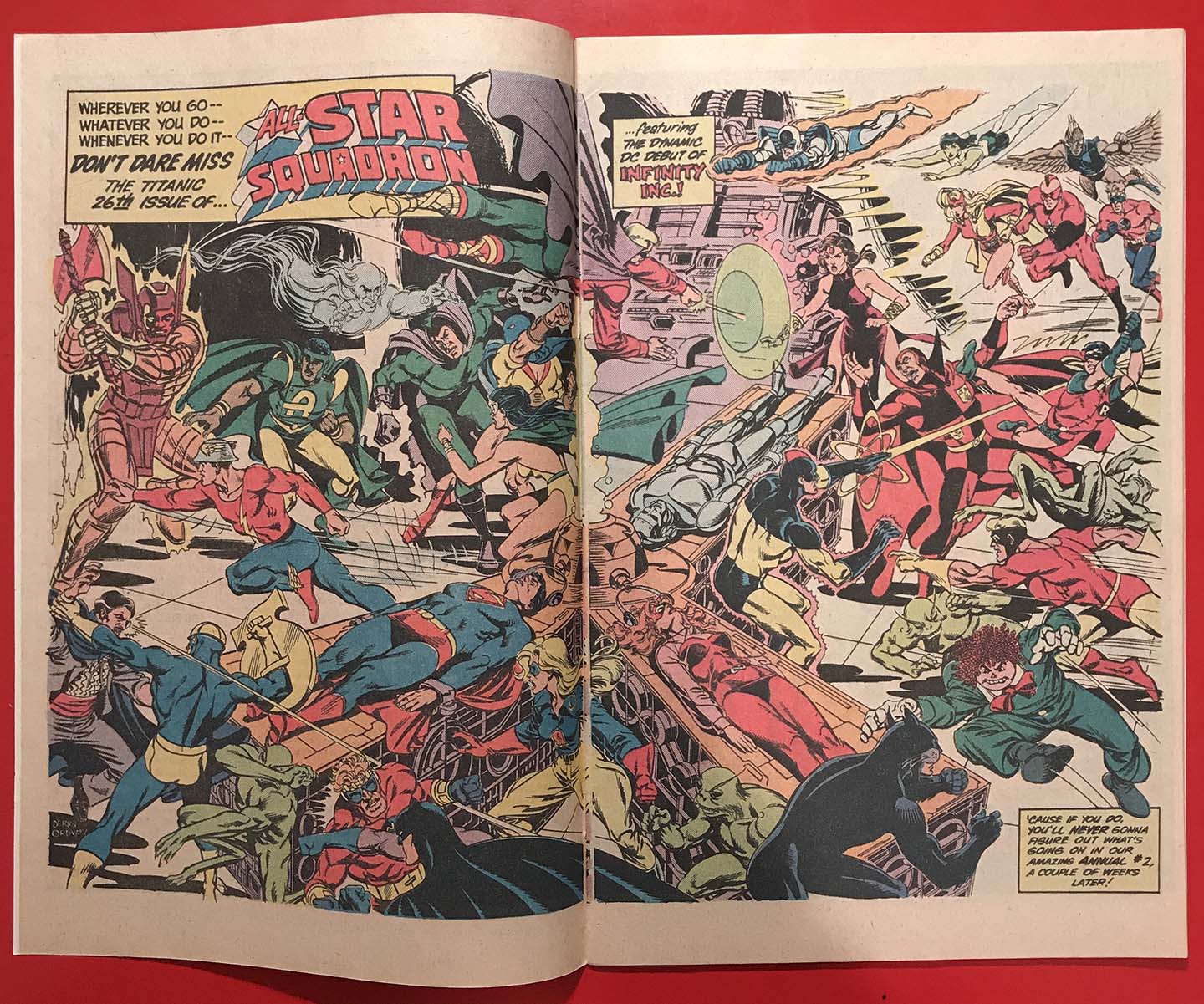 In trying to make sense of the nonsensical, Thomas taps into the way we used to read and absorb information as a species, pre-television, (for me, pre-Internet) when details were doled out slowly. Primary colors galore, ridiculous stories, the momentum of a backyard saga enacted by kids playing dress-up... this is how this comic performs. Like a person telling you a dream: it’s only as interesting in relation to how much you like the person telling it. I like these characters, I like this dream. 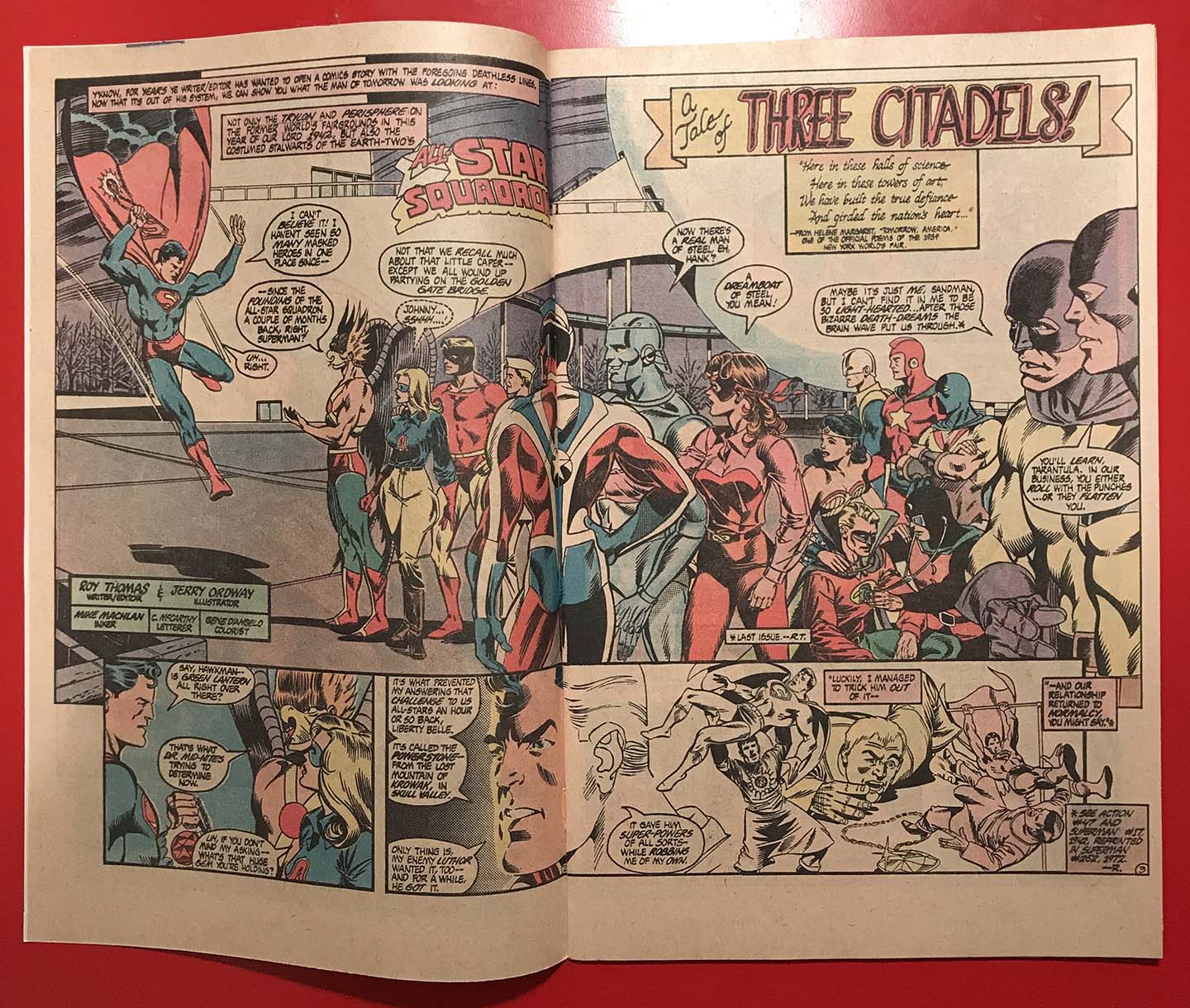 I went and collected the Jerry Ordway material. Baby steps here, I wasn’t gonna go on my usual back issue rampage. I needed these Golden-Age-by-way-of-the-80s stories to have Ordway-level art and I’ve looked through enough of these things to know that wasn’t the case. Ordway’s not only a great storyteller; he’s always had a classic, carefully rendered appeal. Everyone is well behaved and proper in his comics, even the troublemakers. There’s a lush stillness (not stiffness) to his style, with the ability to mimic/honor eras that makes the Thomas material really sing. 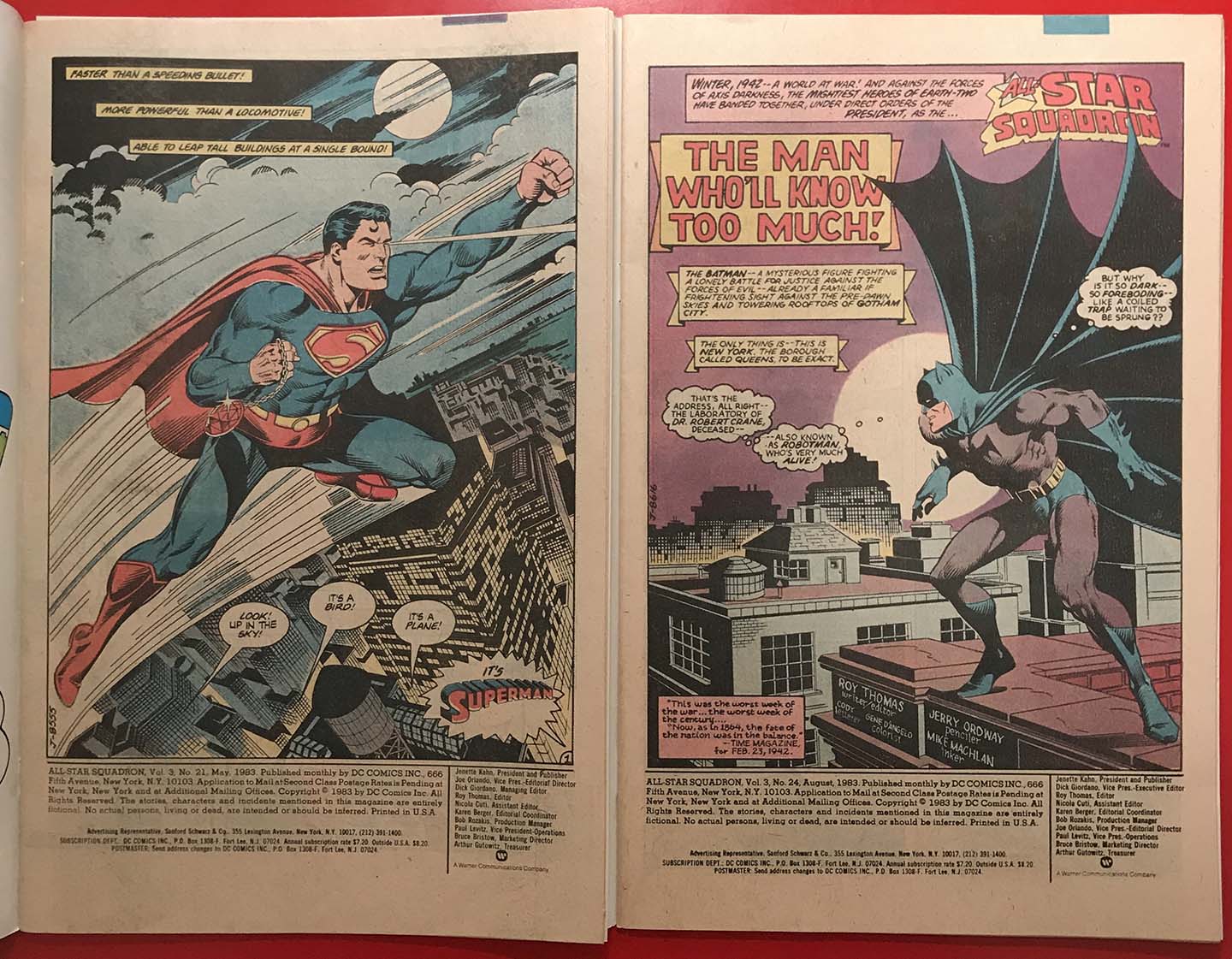 This has all made me appreciate Roy Thomas’ legacy a thousandfold. He shaped crucial moments for the X-Men and the Avengers, he created the Squadron Sinister and the Invaders, he ushered in Conan comics, and he saved Marvel by bringing in Star Wars. At DC, it’s not so much that Thomas was trying to hold on to the past, it’s that he wanted to make sure we didn’t forget that past. It was important to him, and in an era defined by Alan Moore, RAW, and Love & Rockets, hoping that the past was worth remembering, hoping it was at least entertaining to us, was an uphill battle I can’t help but admire. I guess I don't mind all that yellow after all. 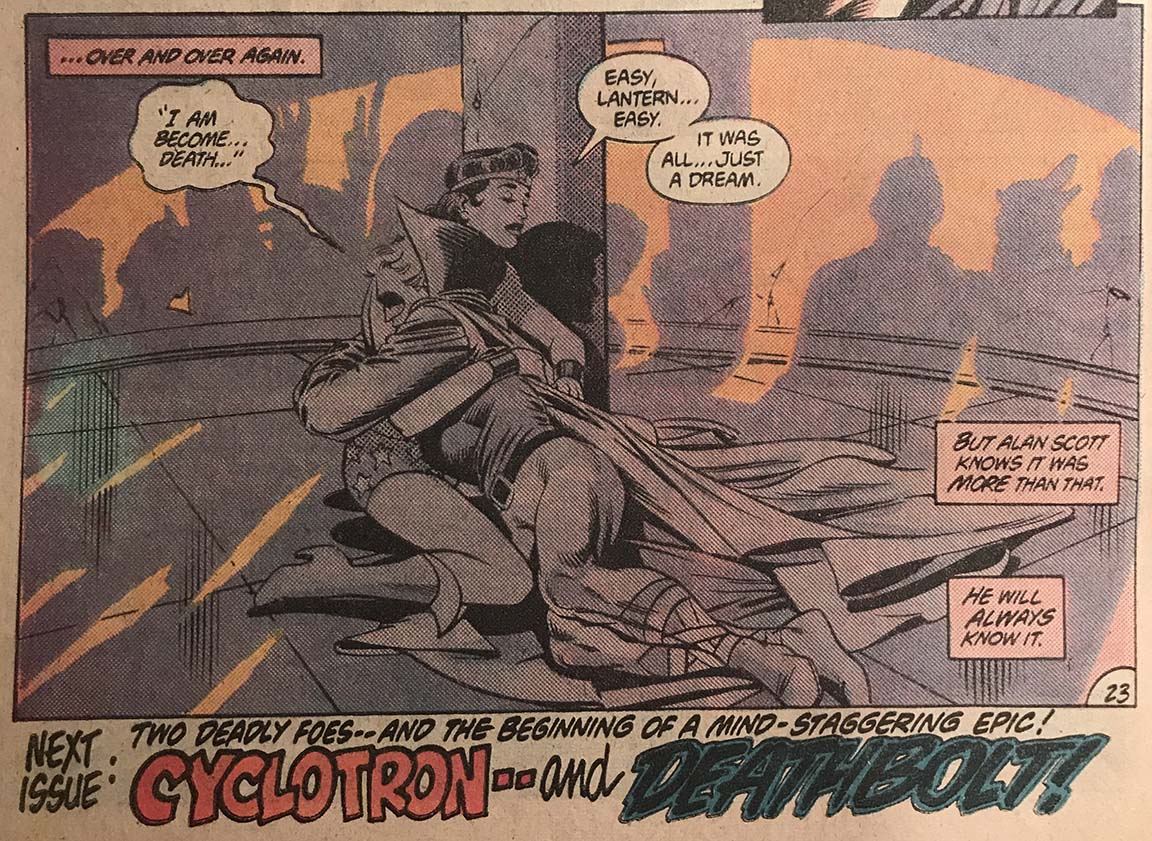 This was quite the experience. Maybe I was susceptible to the ways of Roy Thomas because I had no distractions at my in-laws’ home, it was my downtime, and I went in with an open mind. Without this newfound gratitude, I wouldn’t have been able to get into the next atom bomb of a comic. “X-mas Break” continues with the Justice League of America.

The powers of Mike Sekowsky and Dick Dillin examined on the next OVERWORD.