My Agenda’s Got A Different Twirl (This Week’s Links)

Oh my goodness is your shopping done? There's still time to buy 100 copies of Craig Thompson's Ginseng Roots and give one to each of your nieces and nephews. When they read about how children — children! — had to harvest ginseng in order to pay for Ewoks comics, maybe they'll realize how good they got it.

Ewoks! Are those fuzzbums going to show up in this new Skywalker movie? I heard they might appear. I'll bet you a $1 million Bernie Wrightson drawing that this film is going to reek of that kind of nostalgic fan service.

• Yes, one piece of Bernie Wrightson art did sell for over one million buckareenies.

• Remember a few months ago when everyone lost their minds about The Far Side maybe coming back with new cartoons? Well, that didn't exactly happen, but something did, and there may be more to come. At the very least, we've heard directly from Gary Larson for the first time since foreva.

• You — yes you, but not me — no, never me — can submit your comics work to Slate.com and the Center for Cartoon Studies' Eighth Annual Cartoonist Studio Prize. Previous winners includes prominent cartoonists we all enjoy! Slate is handing out real American dollars for this thing, don't delay.

• Publisher's Weekly has a rundown of the big new comics releases for next spring.

• The Best of the Year lists are flying in fast 'n' furious!
• Forbes.com did it (FORBES!)
• Hyperallergic put a number of comics and GNs on its regular ol' best books list
• Folio did the same for its assesement of  "The Best Books for Print People"
• You know NYT had something to say
• Goodreads let its readers do the work
• SyFy Wire gives us its favorite NEW comic book series (with a #1 that only makes sense given modern publishing strategies)
• Full vote-count-breakdown by Publishers Weekly for its critics poll
• And you know what? CBLDF has a few I missed. Wowee zowee, there's content everywhere you look.

• The Beat has the covers for allllll of next year's Free Comic Book Day releases, including a Mean Girls sequel (yes, the movie) and TWO cover appearances by Usagi Yojimbo.

• MoCCA Fest announced its Guests of Honor for 2020. I am not one of them.

• Gil Roth shared his tribute to his best friend, Tom Spurgeon, on his Virtual Memories Show podcast, recorded at Tom's memorial this past weekend. Below is Dustin Harbin's touching tribute to Tom:

I was planning to go to the Tom Spurgeon memorial in Columbus tomorrow, but I don't think I'm going to be able to now. I'm writing something and working on this drawing, but until those are done let me say that my heart is with all those people attending, and I wish I was there trading stories with you all. Like everyone, what I *really* wish is that Tom saw the giant effect he's had on so many of us. I miss you Tom.

• I like this video of Bill Sienkiewicz talking about making Elektra: Assassin and — albeit briefly — how the series was received upon its release.

• And I also like this video of Cartoon Kayfabers Jim Rugg and Ed Piskor getting a tour of Small Press Expo Executive Director Warren Bernard's collection of comics, books, and comics-related memorabilia.

• Not really comics but still: some sneaky imp added the Black Panther's fictional home country of Wakanda to the USDA's list of approve trade partners.

• Simon Hanselmann kept his name in the "pages" of Playboy with a cartoon profile of masked country singer Orville Peck. You may notice this post is indicated as a "1 minute read." In what world? Take your time, friends. Savor each painted cactus. It's some gorgeous work from Simon; I would have posted an image but The Bunny has the "copy image" function turned off and I ain't got time for screenshots. Just go look!

• Here's a very nice thing: The Daily Cartoonist compiled a list of links to cartoonists' Patreons. It's not comprehensive (that might prove impossible), but it's damn nice.

“This jumble of gags and lovable and loving outsiders succeeds through sheer, unrelenting weirdness.” That’s from @pwpics advance review of J&K, up today! Check our story today for the full review, to listen to the very rare “calc-rock” single, and to RSVP to the J&K book launch party, happening Jan 11th at @shqdungeon

• Here at TCJ, Marc Sobel walked us through the latest heap of oddball, interesting comics he's dug up.

• I can't make it through all of these articles about the Diamond Distribution data leak involving retailers' ordering habits, but I know it's important. Brian Hibbs' analysis is the probably the way to go to the get the crucial info.

• This list deserves its own item: SyFy Wire's Karama Horne wrote up "The 12 Most Influential Indie Comics of the Decade." A lot of Image, which I don't think would have been the case ten years prior.

• It's been 100 years since the first Thimble Theatre. Whether you know what that means or not, get clicking. (Especially if you don't.)

The British comics blog Blimey! has been posting a bunch of very, VERY British classic Christmas-themed covers and interiors, and the one below caught my eye. Boy, is this thing on the nose. Look up "British comic covers" in the OED and this is going to be right next to it. But hey, look at that handsome hand-drawn title. And if this kid doesn't make you think of a Tiny Toons-ed version of a Johnny Ryan character, then I just don't know what. And Hoot came out EVERY SATURDAY?!?! 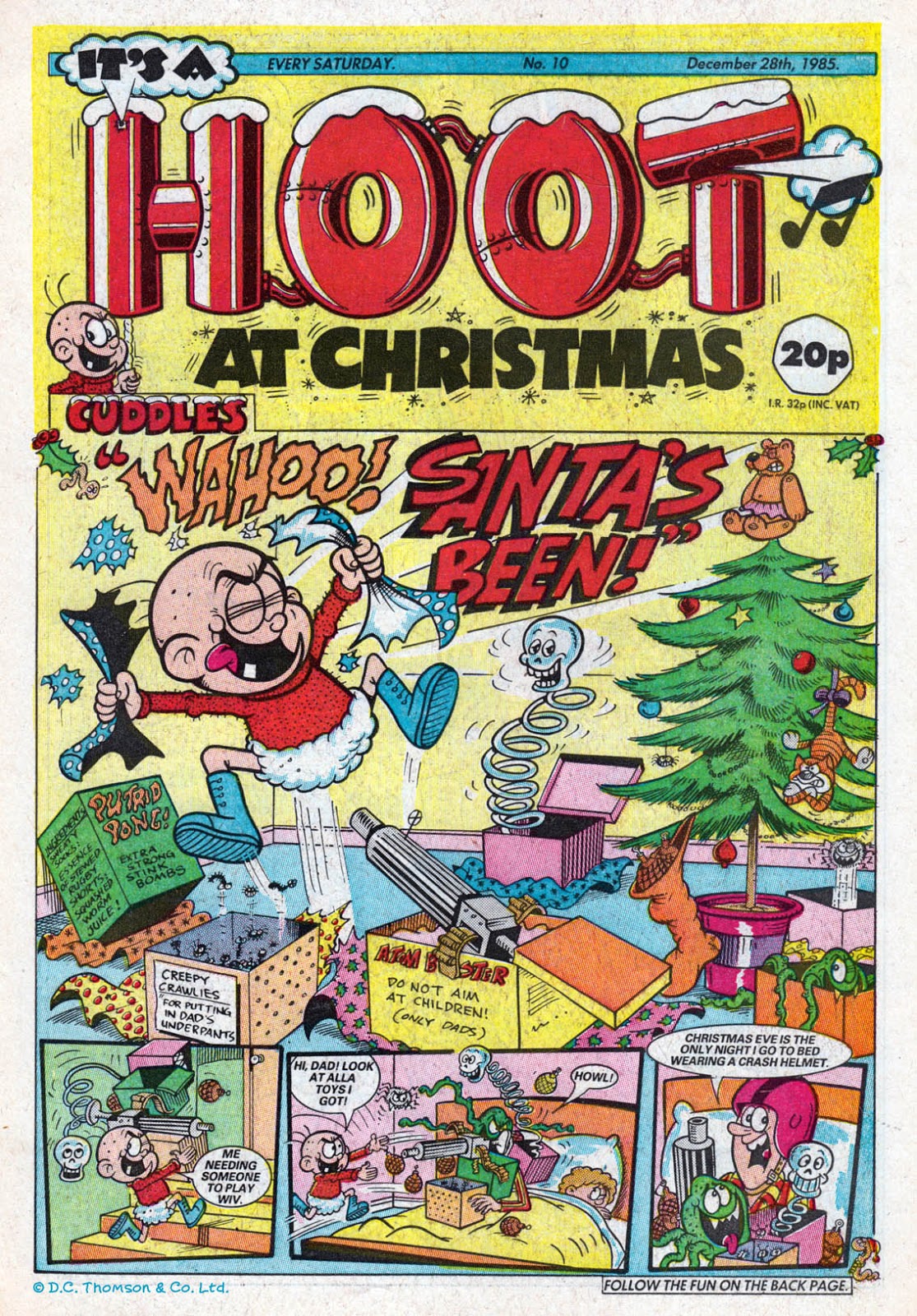