Forfeit the Scrimmage (This Week’s Links)

We've made it halfway through the eighth month of the year. Heard any good conspiracy theories lately? 2019 continues to go down like a Warren Ellis comic come to life, #hotgirlsummer and all.

Before we get to the newsy-news, I'd like to address some important events happening this weekend up here at the top to make sure you read about them before you get bored with all the long-winded stuff below.

• The Autoptic crew will have a special livestream fundraiser event on their YouTube channel this Saturday, August 17th from 12 to 5 PM central. Let Autopic themselves fill you in:

"Throughout the day, various cartoonists will be presenting live drawing demonstrations, talking shop with guest hosts, and interacting with our streaming audience. We’re gearing up for our 2020 festival, and we plan on making Autoptic better than ever. Our goal is to raise $1500 for our new and beautiful venue. With this new space, we hope to grow the show and offer an even more valuable experience for our exhibitors!

Have you ever wanted to see how some of your favorite cartoonists approach the craft of comics making? Are you looking for advice on how to make your own comics? Perhaps you fancy yourself a patron of the drawn word? If so, then you won’t want to miss this event."

• FlameCon — "the world’s largest queer comic con" is returning to New York City's Times Square this weekend, with guests ranging from Ed Luce to Mariko Tamaki to Dana Simpson, and a bunch more. How absolutely great are the characters in this promo artwork? (I don't know who drew it!)

• The great and (I'd say) largely unsung comic book artist Ernie Colon died on Thursday, August 8th. His varied career and diverse artistic talents were remembered by Steven Ringgenberg here on TCJ, accompanied by The Comic Journal's interview with Colon from October 2007. Our friends at The Beat celebrated Ernie with a post chock full of his genre-bending abilities, and former Marvel Editor-in-Chief Roy Thomas remembers the man over at Bleeding Cool.

• It's a good thing I still have my old copies of Mr. Colon's Damage Control limited series, because I don't know how the hell I could buy those books in collected form after making it through RJ Casey's latest must-read for TCJ: "It Is Time To Boycott Marvel." That's about a blunt a title as I've ever seen! And even for the most moral and forward-thinking among us, I imagine it packs something of a punch. Whether you gave up your FOOM membership in 1972, gleefully enjoy an XXL size popcorn during Phase 2 marathons, or are thisclose to finally acquiring a full set of fucking Tsum Tsums — there's gotta be a bit of the ol' corkscrew in the kidney when you think about this once-grand adventure in storytelling and heroism having become so corrupted by the "fartstain" at the top.

Indie comics writer (and, full disclosure, my associate and friend) Kenny Keil had this thought on the matter, which I'm sharing because it made me laugh:

I boycotted Marvel in 1993 for canceling Ravage 2099 y'all think I'm scared of Ike Perlmutter!?

• The Harvey Awards nominations were announced! Forbes(!) took a break from their coverage of billionaires and Pokémon Go to share the list of nominees. (Oh geez, what? Another disclosure? Okay...I was on the Harvey Nominating Committee...yes, I do get around...)

• Also this week at TCJ, Nicholas Burman sat down for a Q&A with academic and artist extraordinaire Simon Grennan to discuss his career, approach to teaching, and his thoughts about what comics can be.

• The Los Angeles Times published Dominic Umile's review of In Waves, AJ Dungo's tale of love and surfing. This book looks really quite stunning, like you're inside the ocean of the book itself.

• We have a Tweet of the Year contender from Julia Gfrörer. Seems this one struck a nerve  — look at those likes! Hey, I'm one of 'em. Just put something in my hands so I can smell the paper and smear the ink with my thumb sweat. (P.S. Tumblr has been sold again.)

Tumblr screwed us, Facebook screwed us, and eventually Twitter will screw us too. If you want a cheap, accessible platform to make friends and share your art that will never screw you to make a buck, my friend, it's time to get into zines pic.twitter.com/thXgyahM5O

• Ray Billingsley of Curtis fame was interviewed by Geoff Grogan on the Blockhead podcast. Snap your backwards green baseball hat on tight — this conversation has a Part 1 and a Part 2!

• There are whispers that Nemo magazine is returning...whispers from its editor Rick Marschall as he shares some mightily impressive inscriptions from his collection...

• In other not awesome Marvel goings-on, there has been some discussion about similarities in the storylines of Claire North's novel The First Fifteen Lives of Harry August and Jonathan Hickman's much-lauded new X-Men comics. I am not drawing conclusions other than this: I read the first issue of that new X-stuff. My kingdom for a Fastball Special.

• But I am a designer by trade, and they're doing some interesting work on the look of those X-books. SyFy Wire spoke to Tom Muller, the designer ensuring the various new and relaunched titles coalesce visually.

• The Nib has returned, but not before its editor Matt Bors had a comic removed by Instagram. This story made it all the way up to Rolling Stone, which took a break from writing about Billie Eilish and the latest Beatles re-release to report the story in full. In solidarity with Bors, the cartoon is reprinted again below.

• The arbitrary and capricious censorship keeps-a comin', this time from Apple over “overtly sexual" content in Emma Vieceli and Malin Ryden's Breaks on the Tapas app. The Beat has the story.

• The Top 20 adult graphic novels BookScan list for July had no superhero titles. "Not even Watchmen, which used to make the top 20 every month."

• The National Cartoonist Society is hosting an auction of new Popeye-inspired artwork as created by many of its members. That's just pure fun. I mean, if you scoff at this you have no soul: 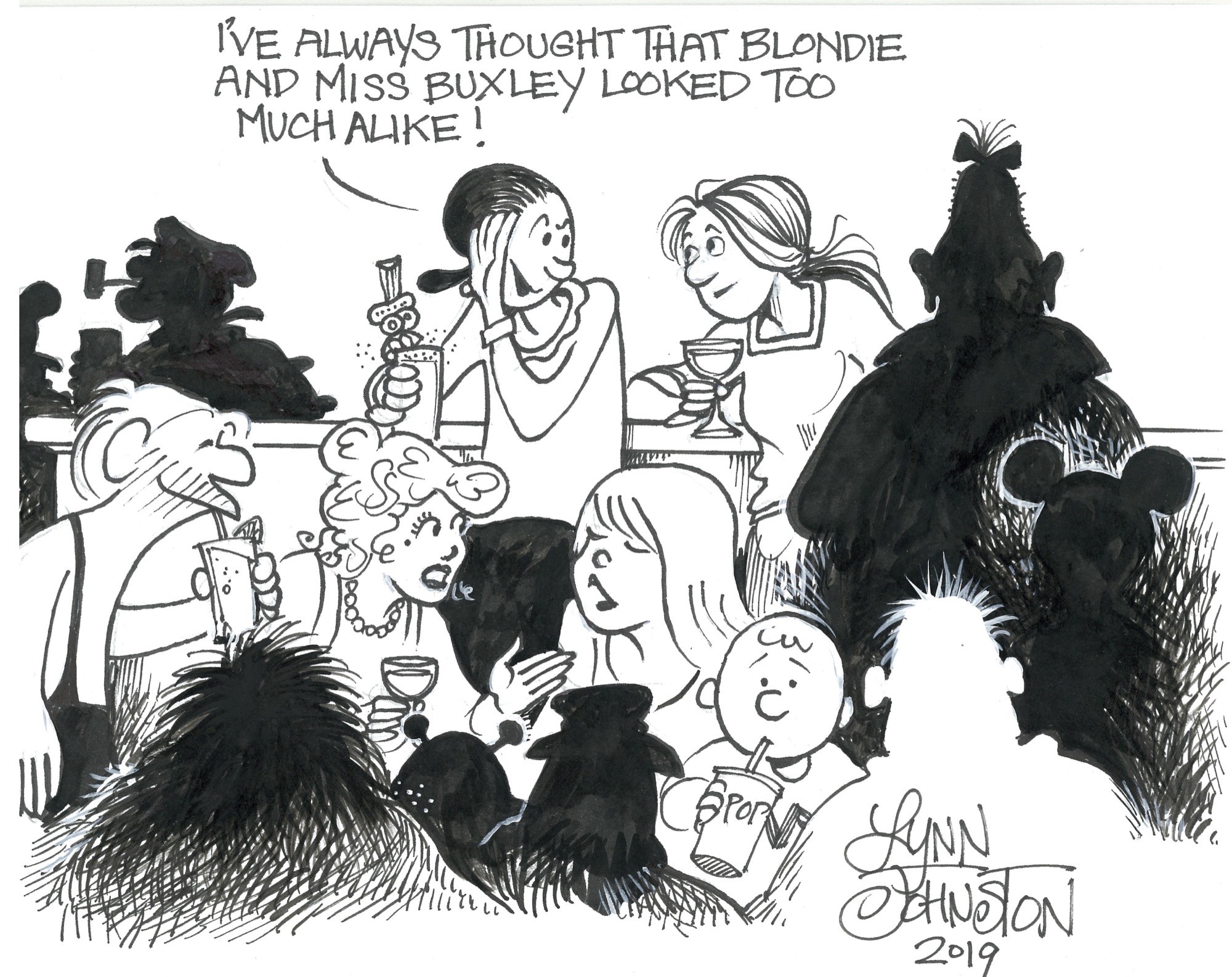 • Smash Pages and Mark Russell said some things to each other about the clever comics Mark Russell writes. And then SP did something similar with Brian Hurtt, Marie Enger and Matt Kindt about their St. Louis based comics studio and the anthology they're producing.

• Says here Brexit will cause comics prices to increase in the United Kingdom. The Judge Dredd scripts write themselves nowadays.

• Will comics get anyone excited about basketball and football? The Los Angeles Clippers and the Chicago Bears sure hope so — L.A. has released their 2019-2020 schedule as a comic, and the Bears are telling an ongoing story about their season on their official site. Sam Bosma and NFL SuperPro aside, I don't have much confidence there's enough of a Venn diagram here, although I do see a surprising number of Mets fans with Dr. Doom tattoos on their forearms. (Third and final disclosure: I am a Mets fan.)

• Nicole Rudick had a lot to say about Peanuts at The New Yorker. Personally, I don't like to overthink Peanuts; I find a lot of comfort in its simplicity. Somewhat ironically, that's sort of what the piece is about — how the "beloved comic strip invited readers to contemplate the big picture on a small scale." But she talks a lot about Chuck's big round head, and I could overthink that all day.

• The Daily Cartoonist has compiled a sneak peek of Bill Griffith's upcoming Ernie Bushmiller biography. I defy you to claim you are not looking forward to this book! l. 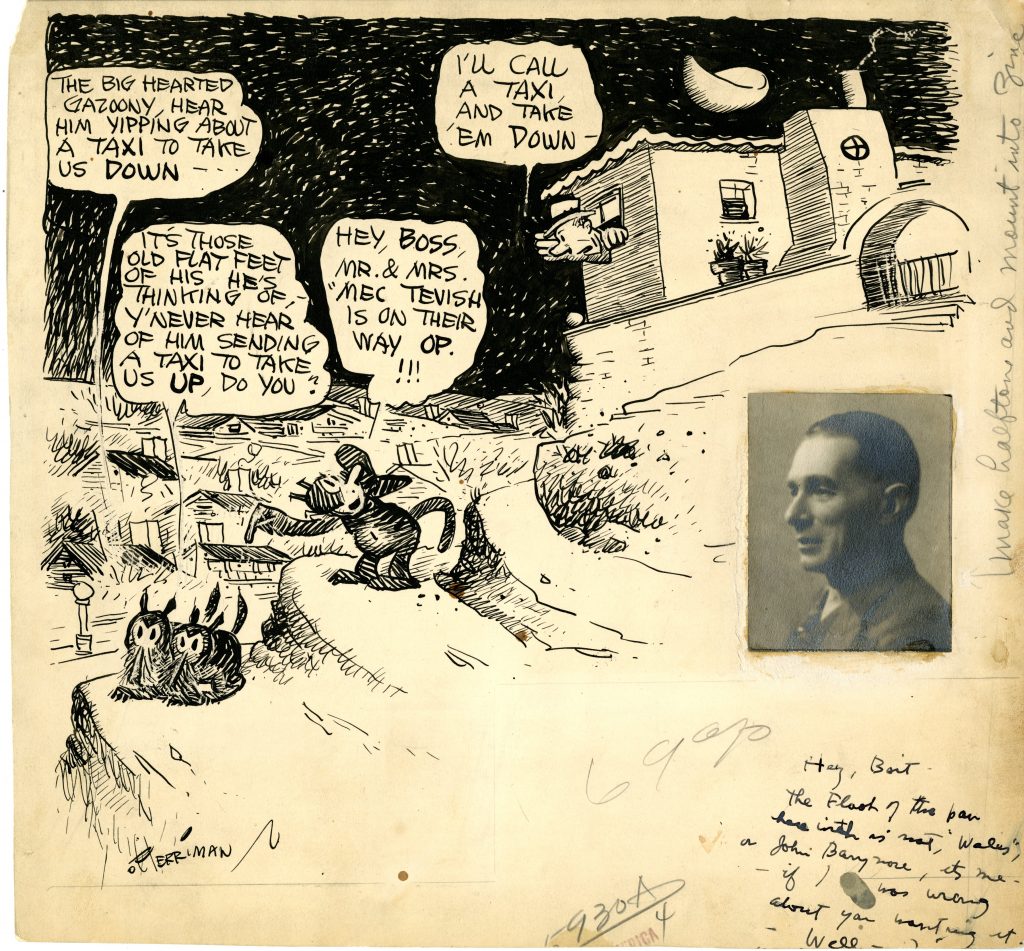 • Is the new Youngblood owner a genius-level troll? I'm starting to wonder who this could really be.

• Broken Frontier reviewed Rebecca Rosen's Flem. Love the page layouts on this one! They also spent time with Skip by Molly Mendoza, last week's TCJ guest cartoonist. If you like Medonza's daily diary even a little bit, you're going to spit out your kneecaps when you see this.

• Finally, it's SyFy Wire again, this time with legendary power couple and Flanders Favorites™ Louise and Walt Simonson. They tell the story of how they met! And reveal which iconic comic cover Louise modeled for! I am bowled over by all of it. These two were so incredibly nice to me at a comics convention when I was 12.

I should have put this way up top! Well, dang, let's end on a high note. May all of you find your Weezys and Walts. See you next Friday.

6 Responses to Forfeit the Scrimmage (This Week’s Links)