What's left to say, what's LEFT to SAY? Go get that groundhog, tell it Flanders Has Had Enough™ and that it's high time we get the streets scalding. I really like that Eilish album in the way I once really liked the movie Heathers but the Grammers could have spread the love. I want to see Lil Nas X on a Wheaties box!

I literally JUST got a Citizen App alert that there is a real life "compactor fire" a half mile away. I hear you, universe, I'll get a move on:

• This is one of those actual Big Deals: for the first time, a graphic novel won the Newbery Medal, "the most distinguished contribution to American literature for children."(1) The winner is Jerry Craft's New Kid; you can find the details at The New York Times. Be sure to also head over to Time.com, where Raina Telgemeier wrote about what the significance of this recognition means for comics. Several other graphic novels were recognized with notable awards, as noted at Fleen.

• Prominent illustrator Jason Polan, whose life and career significantly overlapped with comics, has died at the age of 37.

• Ivan Brunetti's latest "Line Readings" column for The Paris Review is up. Titled "Comics as Poetry," Brunetti focuses on a four-panel Lynda Barry comic to explore this concept. That guy sure ain't dumb, I'll tell you what.

• The legendary Angelo Torres has joined Instagram! It's really him posting and writing!

• An editorial cartoon has caused international controversy, as China has demanded an apology from Danish newspaper Jyllands-Posten after it published a Niels Bo Bojesen cartoon referencing the Coronavirus in relation to the Chinese flag.

• Long-running, fan-favorite, and very damn good comics site The Beat has gone independent after several years under Lion Forge. Since this news broke on the 24th, Heidi MacDonald's site has been hammering it the heck out on the comics coverage front, with a profile on Birdcage Bottom Books, exclusive info about the 2020 Bluestockings Comics Festival and its new location at Kickstarter headquarters in Brooklyn, and an extended look at Peow's new anthology series Ex.Mag. They are of course tackling tons more (reviews and interviews linked down below!) so let's keep reading and supporting them, please.

• A call from Conundrum:

• Roz Chast will be speaking in Portland, OR next Wednesday, February 5th.

• The new issue of the digital-only magazine PanelxPanel is out, and it's all about webcomics.

• I love this...at Michael Maslin's Inkspill, Maslin shows how Harold Ross, the first editor of The New Yorker, would write an "R" on the upper right of cartoons he was accepting for purchase. A similar thing would happen when I worked at MAD Magazine: longtime, legendary editor Nick Meglin would write an "N' in pencil next to Sergio Aragonés' marginals that were approved. (These are the little drawings printed along the perimeter of MAD articles. And yes, even Sergio had gags rejected.) Probably every page of Sergio marginal originals out there — he drew about ten to twelve, fully inked, on each letter-sized page — has a number of hastily-written "N"s all over it.

• Women Write about Comics has a recap of the Marie Duval show at the Society of Illustrators in New York.

• I'm newly following a comics blog called 13th Dimension. They've presented the "Top 13 Cover of January 1970" and they are RANKED. Somehow this Jerry Lewis cover is only #13: 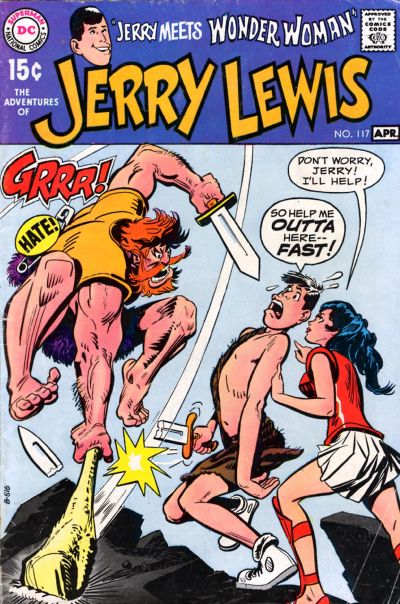 • Ann Telnaes is the greatest:

• Cartoonists Nell Brinkley and E. Simms Campbell are being inducted into the Eisner Awards Hall of Fame as automatic judge's choices. There are fourteen other nominees, from which four inductees will be selected. It's a formidable group.

• This is great: AdHouse publisher Chris Pitzer takes us down the rabbit hole of under-the-radar publisher Catalan Communications and his attempt to collect its entire catalog.

• It was a strong week on Cartoonist Kayfabe; highlights include the fellers flipping through Alex Toth's under-appreciated One for the Road and a 1990 interview with Jack Kirby from The Comics Journal, and Ed Piskor sharing one of his favorite storylines from the Dick Tracy comic strip.

• Here at TCJ, Robert Newsome writes about the work of cartoonist Patrick Dean and the current exhibit of his work at The Georgia Museum of Art.

• Also here, Bob Levin explores the micro-paintings of Guy Colwell (which are unbelievable to see when presented next to coins for scale) and Paul Tumey celebrates manga cartoonist-surrealist Ebisu Yoshikazu.

My grandfather Jack Kirby was 63 years old when working on this masterpiece. pic.twitter.com/4X3xwC8JPG

• Sorta kinda but not really relatedly, Jules Feiffer published a new comic on his 91st birthday.

• Speaking of Brunetti and Ware (I swear we did, way up top), here's video of them talking with The Peanuts Papers editor Andrew Blauner about you-know-what and you-know-what.

• Kickstarter says it will be publishing an anthology of prominent Kickstarted comics, and would like suggestions about what to include.

• The University of Michigan profiles cartoonist alumnus Cathy Guisewite on the eve of the publication of her new book of essays.

• Ed Brubaker and Sean Phillips have created a comic trailer — not a video, and not a preview of pages, but a distinct TRAILER — for their next graphic novel.

• Mike Lynch posted a YouTube video of the audio of a 1971 lecture by Dennis the Menace creator Hank Ketcham. Lots of great photos embedded in the video.

• Editorial cartoonist and The Nib co-boss Matt Lubchansky did the illustrations for Gothamist's proposed NYC Subway mascots. I take that rollercoaster through Perdition twice daily so I got a big kick out of these. I'm partial to Countdown Clarke myself: TCJ
• Cindy Copeland's Cub by Hillary Brown
• Junji Ito's No Longer Human by Derik Badman
• Nicolas Mahler's Old Masters: A Comedy by Roman Muradov (Muradov is the reviewer, NOT a new book by him!)
• Craig Thompson's Ginseng Roots #1-3 by Anya Davidson (same as above, not BY Davidson!) (I love these books, by the by.)

Women Write About Comics
• Zeb Wells and Will Robson's Peter Porker, the Spectacular Spider-Ham #1 by Lisa Fernandes (damn right I'm linking to a Peter Porker review on The Comics Journal)

We did a lot this week. Now let's all go ahead and read Jim Woodring's caption under the photo below, and rock ourselves to sleep. See you in my sunny, springy dreams.

I drew this large 2-pp spread for a Frank story in progress three times to make sure exactly the right mood was captured. Which one will be used depends on context to be created. #jimwoodring #art #artist #artwork #penandink #Frank #comics #comicsart #comicsartist